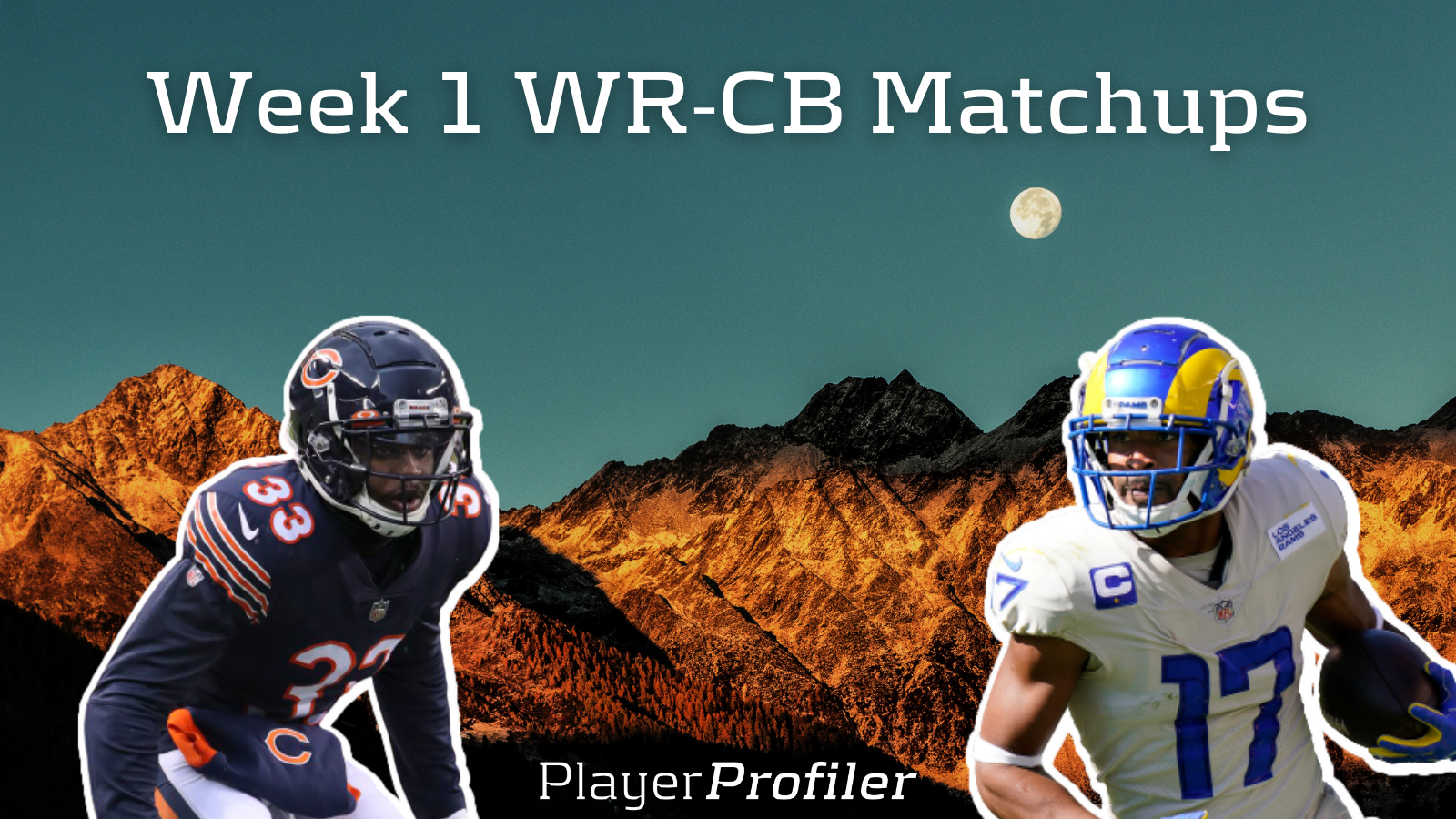 The start of a new NFL season means the return of the weekly WR-CB Matchups series! This season my goal is to bring attention to receivers available in most leagues that can provide FLEX starts to fantasy teams. Also, I want to identify receivers that shouldn’t start despite starting in a vast majority of leagues.

PlayerProfiler’s Cornerback Rankings, Vegas spreads and totals, and team defense stats from Pro Football Reference will be the primary source of data used along with advanced stats and metrics from PlayerProfiler.

To make sure these takes aren’t bland and useless (i.e. START Davante Adams, SIT K.J. Osborn), I have a couple of rules that I will follow. For my START recommendations, receivers must be rostered in less than 50-percent of ESPN leagues. For my SIT recommendations, receivers must be started in more than 50-percent of ESPN leagues.

Since 2019, Russell Gage has exceeded 70-percent Snap Share in 12 games. In those games, he has scored 12.8 PPG or more nine times. Of those nine games, SIX were against division rivals New Orleans Saints and Tampa Bay Buccaneers and he scored four total touchdowns. Can advanced stats and analytics tell us WHY Gage did well against those specific defenses? Absolutely!

QB Pressure Rate in 2020 via Pro-Football-Reference 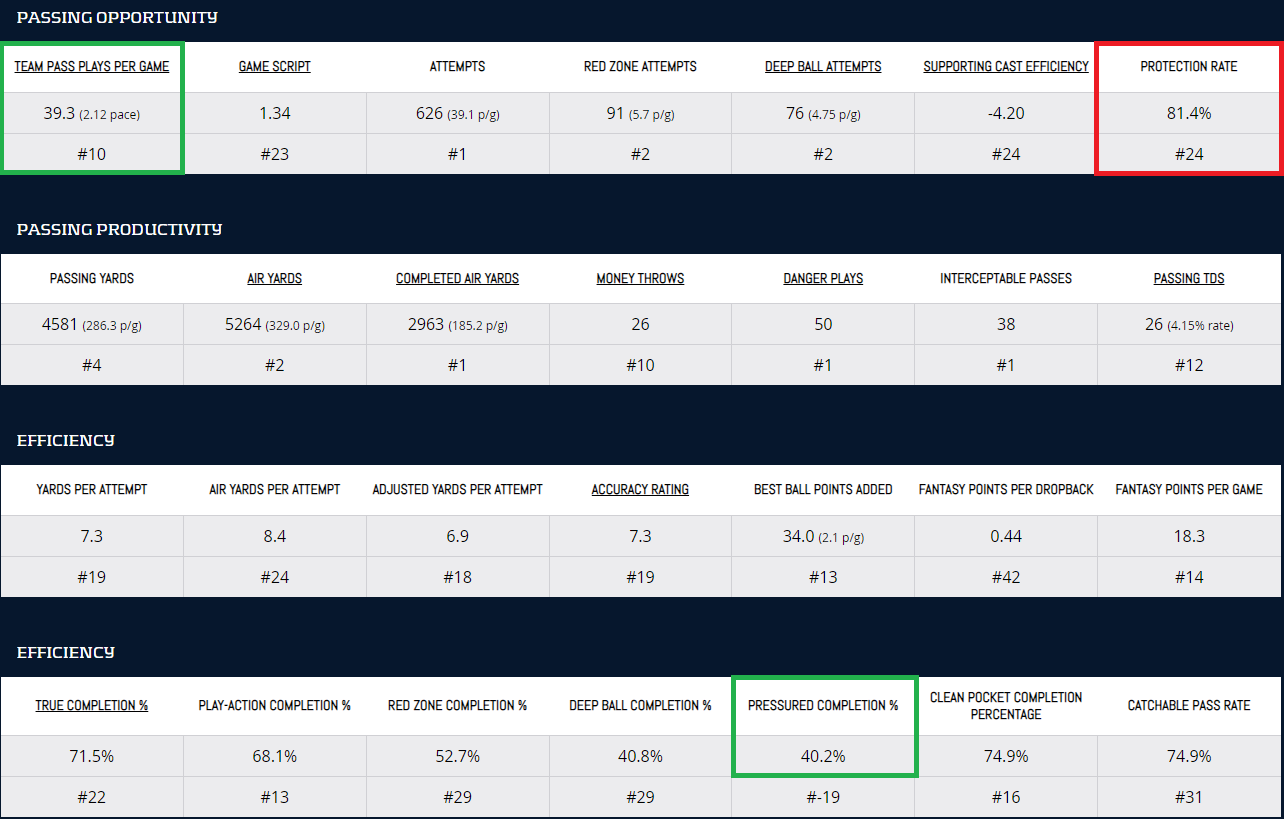 Ryan Will Be Under Pressure, But These Are The Games That Gage Scores

Over the past three seasons, Matt Ryan‘s Protection Rate has ranked no higher than No. 24. His rankings among quarterbacks in both Yards Per Attempt and Deep Ball Completion Percentage has dropped each season during that time. Simply put, when under pressure Ryan checks down to his security blanket. Enter Gage and his 8.6 (No. 85) Average Target Distance.

The Eagles are Ryan McCrystal’s 27th-ranked secondary from SharpFootballAnalysis. Gage’s matchup in the slot is Avonte Maddox (No. 71-ranked CB). His struggles are best shown by his -2.0 Coverage Rating.

He saw a 22.7-percent Target Rate and allowed a catch on 15.1-percent of his Routes Defended. If he had enough snaps to qualify, both would have finished in the top-10 highest rates. This tells us that opposing offenses targeted Maddox often with success.

As of this writing, Robert Woods is currently starting in 87.7-percent of ESPN leagues, the 14th-highest among WRs. On top of that, people that drafted Woods had to take him early in their drafts. So why should you sit Woods in Week 1 after the draft pick invested in him? 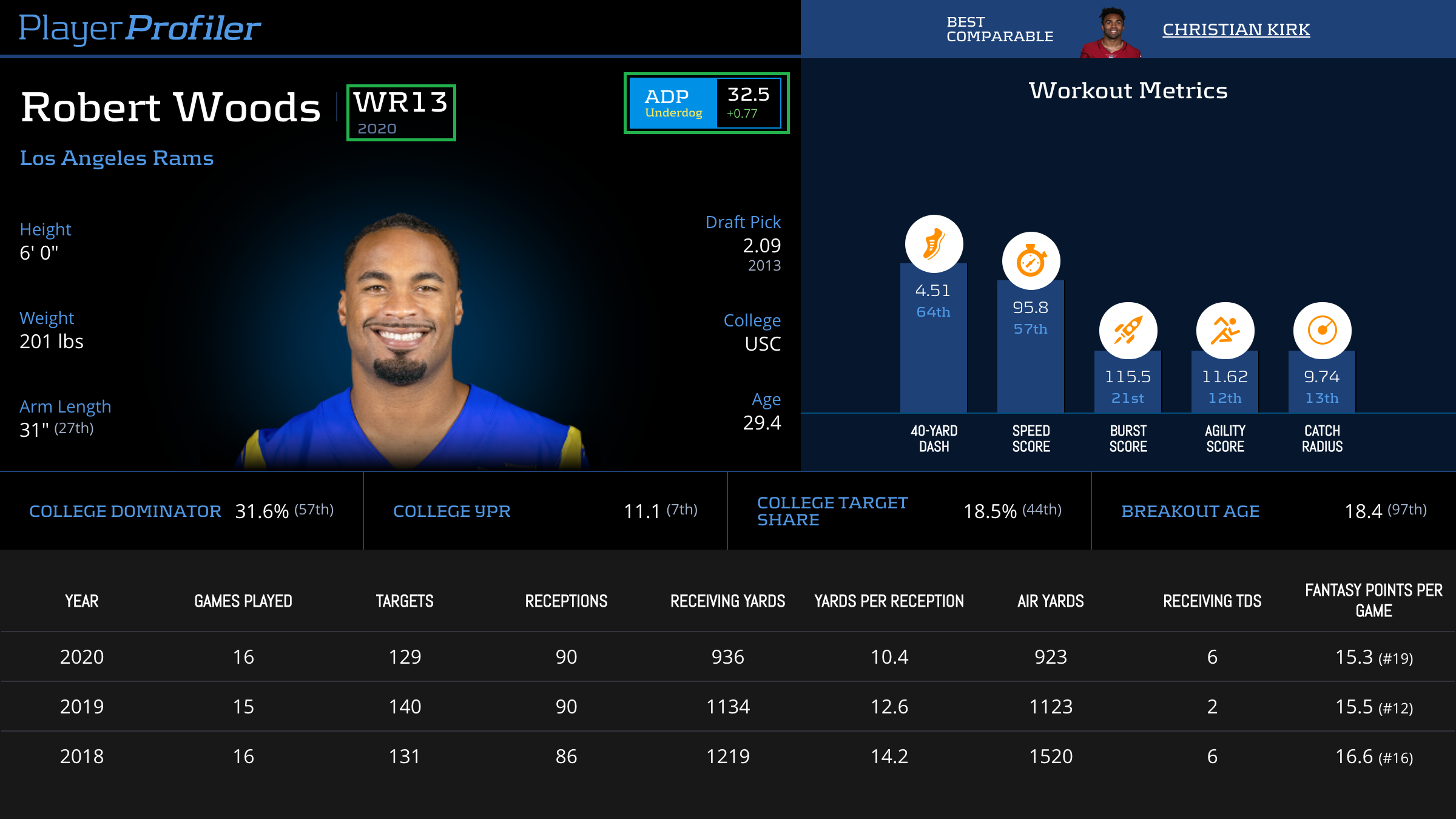 The expectation is that the Rams will easily take care of the Bears, even without star running back Cam Akers.

Over the past two seasons, the Rams have been at least a 5-point favorite at home against their opponents nine times. Woods missed one of those games. In those eight games, the Rams won five times. He failed to top 70 receiving yards in any of those games. When the Rams take care of teams they are supposed to beat, Woods isn’t utilized because he isn’t needed.

Last season, the Rams went 3-0 in home games where they were at least 5-point favorites. Woods averaged less than 10.0 fantasy points per game in each game. The other part of his struggles is that he matched up against good cornerbacks in James Bradberry (No. 15-ranked CB), Stephon Gilmore (No. 21), and Kyle Fuller (No. 38).

The opening spread for the Colts-Seahawks game had the Colts as a two-point home favorite. However, after several injuries to the Colts’ offense, the spread shifted the other direction by over four points. The most notable injury was to the No. 1 wide receiver, T.Y. Hilton. With an 18.8-percent (No. 47) Target Share now vacated in Week 1, the time is now for Parris Campbell to capitalize for a team projected to play from behind.

A lengthy list of injuries has derailed Campbell’s early career, but fortunately, this is a prediction for one game and not a full season. Play Campbell while he’s healthy. He’s the most dangerous receiving weapon the Colts have for now. Last season, the Seahawks defense allowed a league-high 411 targets to the wide receiver position. With 4.31 (100th-percentile) 40-Yard Dash speed and 135.5 (97th-percentile) Burst Score, Campbell is shaping up to be a Week 1 smash.

But what about last season’s incumbents, Michael Pittman and Zach Pascal?

Let me ask a question: are we concerned about two wide receivers with Hog Rates under 10-percent?

They are never the focal point of the offense, even with Hilton missing time and Campbell out for most of the season. Meanwhile, Campbell’s Hog Rate has exceeded 13-percent in both of his NFL seasons, and his Target Rate hasn’t dipped below 26-percent in a season.

This brings us to the secondary of the Seahawks. All of the Seahawks cornerbacks rank outside the top-60 in the Cornerback Rankings. Three of the cornerbacks rank outside the top-90, including Campbell’s primary coverage, D.J. Reed (No. 91). In nine games, Reed allowed 5 or more receptions in 7 of his 9 games played on defense. His 4.9 receptions per game were eighth-highest in 2020.