Welcome back I hope everyone had a great Thanksgiving and enjoyed the double slates. We’re onto Week 13 now diving deep into the advanced stats and metrics found only at PlayerProfiler.com to identify high upside QB and WR stacks to roster in DFS. For QBs, volume is typically the name of the game. We want to see QBs at the top of passing Attempts, Red Zone Attempts, and Deep Ball Attempts. Alternatively, target QBs who add value over the ground with rushing Carries and Rush Yards per Game. For WRs, volume is important, Target Share and Routes Run matter, but we also care about the types of targets. Deeper targets produce more volatile fantasy scoring including higher ceilings. We want to see solid Average Target Distance.

In the overview last week, we discussed how on a condensed slate with most of the big name QBs not available, that fantasy gamers were likely to consolidate on a few options. Unfortunately, the three recommended plays went on to be the three most popular plays of the day. Each finished with a roster share above 10-percent in large field tournaments. That is not what we’re looking for in this piece. Looking ahead, we’ll keep working to identify more under the radar plays and leverage pivots.

Performance-wise, Justin Herbert scored the highest of the three going over 24 as he was forced to come from behind in negative Game Script against the Broncos. Keenan Allen led the team in targets with 10 but didn’t find the endzone. He finished with 15 as a result.

Cam Newton connected on a huge play with D.J. Moore to start the day but was benched by the end after throwing two picks and completing less than a quarter of his passes. Chipping in a rushing TD helped and was the real driver behind the play, but such a disastrous day from Newton including the demonstrated job insecurity really tempers expectations for him going forward. He had 8 points while Moore pieced together 17 on only four receptions.

The most shocking result of the day came from Tom Brady, or perhaps more appropriately, Leonard Fournette. In a back and forth game, Brady tied his season low in passing attempts with only 34. Featuring four rushing touchdowns, this was a fluky down game from Brady who finished with 12 points. Mike Evans was uncharacteristically quiet as well as he only saw five targets which he turned into 16 yards.

We’re faced with another interesting challenge in Week 13. Initially, the marquee game appears to be Bengals-Chargers with a 51-point total and a three point spread. That has the makings of a fantasy point bonanza and is playable provided you find some differentiation with the rest of your lineup. Two of the next three highest total games project to be blowouts with the Buccaneers 11-point favorites over the Falcons and the Rams 13-point favorites over the Jaguars. Popularity can be difficult to gauge in these situations and seems to be largely driven by the consensus narrative that week.

We also have some QB injuries to monitor with Kyler Murray potentially returning and Jalen Hurts on track to play but with a sore ankle. Against a pitiful Jets team, it would be surprising if Hurts rushes as much as he usually does.

We’ll kick it off with the Rams in the aforementioned game with the Jags. As heavy favorites at expensive salaries (over 16K for the stack), this pair should go under-rostered relative to upside. The Rams are tied for the highest implied total on the slate at over 30 points. Working in our favor is the fact that this a team that doesn’t take their foot off the gas when winning.

In terms of pass rate over expected, the Rams pass more often than league average in every situation except short yardage. That volume is combining with exceptional efficiency this season. Matthew Stafford‘s 8.3 Adjusted Yards per Attempt rank No. 2 among qualified quarterbacks, while his 8.7 Air Yards per Attempt rank No. 8. Matching that efficiency with that volume, it’s no surprise Stafford ranks No. 3 in Passing Yards and No. 2 in Passing TDs.

The main beneficiary of that volume has of course been Cooper Kupp. He leads the league in Targets with 126 and Red Zone Targets with 24. Coming off six straight top 10 finishes, playing Kupp doesn’t require much convincing. The bonus we get this week comes from added leverage with increased Darrell Henderson play given the spread.

Tua Tagovailoa leads our next stack. Similarly to the Rams, the Dolphins have been passing at a rate over expected. That’s led to 38.4 (No. 6) Team Pass Plays per Game. Tagovailoa isn’t throwing as deep as Stafford, only 6.6 (No. 34) Air Yards per Attempt, but is completing passes at an elite level. His 75.3-percent True Completion Percentage ranks No. 2, while he’s also top five in completion percentage in the redzone, clean pockets, and off play action. 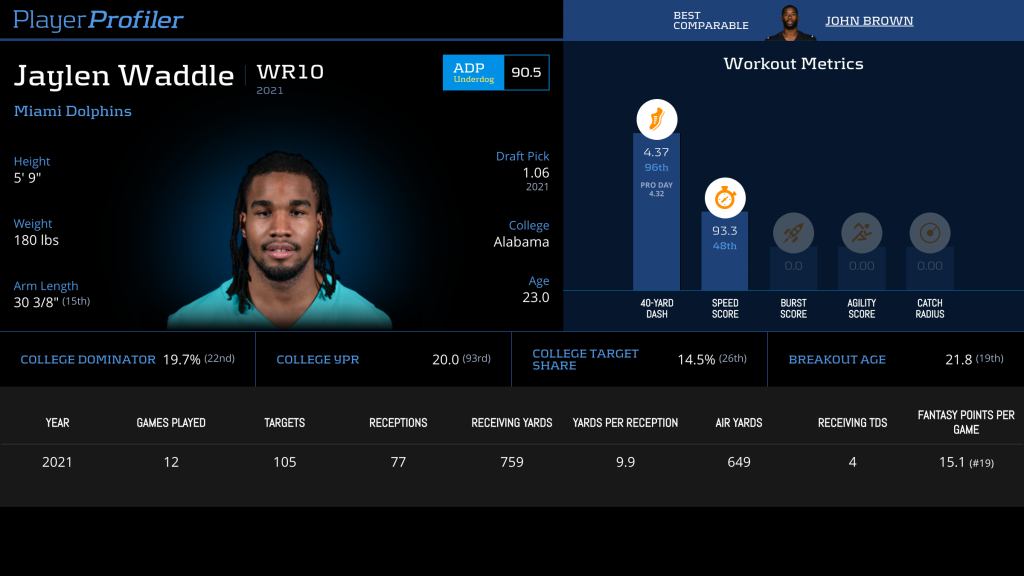 That short passing game has focused on Jaylen Waddle. The sub-4.4 burner has converted 105 (No. 7) Targets on only 6.2 (No. 99) Average Target Distance into 77 (No. 5) Receptions. The Dolphins have prioritized getting Waddle the ball and letting him make plays in space. His 318 Yards After the Catch rank No. 9. With nearly a $1K price jump over the last two weeks, Waddle looks like an excellent Buy High opportunity this week as other fantasy gamers balk at the increase.

For our final play this week we look to take advantage of a narrative circulating in the real football and fantasy football media. Over the last couple weeks, the Washington Football Team have overwhelmed opponents through time of possession, hampering opposing offense simply by keeping them off the field. We’re being warned to avoid playing offensive players going against Washington. With the game manager reputation, Derek Carr does not project to be a popular play this week.

Despite this, Las Vegas has a 26-point implied team total. They will score points. As you imagine how this game plays out, one way that jives with these competing factors involves the Raiders capitalizing on explosive plays. Enter DeSean Jackson. As Ben Gretch noted in his wonderful Stealing Signals column, Jackson set a season high in Snap Share last week while still producing ridiculous efficiency. His 4.46 Yards per Route Run is on a low sample, so grain of salt, but the next highest this year is Deebo Samuel at 3.40. Additionally, his 30.1 Yards per Reception is likely to come back to Earth, but the Raiders have had success on deep passing this year. The two league leaders in Yards per Reception with a large enough sample are Bryan Edwards and Henry Ruggs.

DeSean Jackson is trending in the right direction

This has all the makings of a high upside, GPP play. We’re specifically banking on explosive splash plays to get there with a frighteningly low floor. This will not be a highly rostered stack, so if it hits you’ve given yourself a huge edge on the field. That allows you to build rosters with more of the consensus best plays giving you a solid projection with tournament winning differentiation.