Happy Thanksgiving week to all. Usually this is one of the most fun weeks of the season for daily fantasy football with two big slates going. The focus of this piece will be on the Sunday main slate. As always, this series is dedicated to using the best advanced stats and metrics at PlayerProfiler to identify high leverage Quarterback-Wide Receiver stacks to play in daily fantasy football tournaments. A stack combines a QB and one or more pass catchers from the same NFL team in order to benefit from the positively correlated fantasy scoring between the two positions. We’re looking to capitalize on shared fantasy point chunk plays.

This last week was among the lowest scoring weeks of the season. The cash line barely hit 130. The scoring was especially dreadful for the QBs. With much of the chalk flopping in the Cowboys Chiefs game, the opportunity was there for under the radar stacks to surge ahead. That happened with both sides of the Packers Vikings game.

The first stack we looked at featured Joe Burrow and Ja’Marr Chase. The Bengals reverted to their run heavy ways nursing a lead this week to the detriment of the passing game. Burrow connected with Chase for a late touchdown to help prevent a total disaster of a day, but finishing at 10 and 13 points respectively, they still didn’t do enough. I suspect the roster share garnered (around 10% each) was at least in part due to late swappers getting off Dak Prescott and Patrick Mahomes stacks. That flexibility was part of the appeal of this stack.

The other stack played Russell Wilson and D.K. Metcalf to similarly disappointing results. At only 2 and 6% played though, we were much happier with the leverage opportunity here. Instead, the Seahawks continued in their slow paced, run heavy pattern even while trailing the whole game. Russ had 8 and D.K. 7 points.

With the three game Thursday slate, our main Sunday slate is slightly compressed this week. The Colts-Bucs game is the only game currently with a total above 50, but several more are close behind. This is the point of the year where we need to begin to look at weather for DFS. However, you have to be careful about how much you let it affect decision making. Cold temperatures are not inherently a problem. Wind and precipitation are what can influence passing volume and efficiency within a game. Reports of 15 MPH wind in Green Bay this week do put a damper on the Packers and Rams passing attacks much more so than the temps forecasted in the 30’s.

The other notable factor this week is the lack of top end star power at the QB position. Mahomes, Josh Allen, Dak Prescott, Lamar Jackson, and Kyler Murray are all off the main slate. This will impact roster construction by making the premium players at the other positions more popular than they otherwise would be. Don’t expect your budget QB plays to be as under the radar and look for more contrarian spend up options accordingly.

Building off the theory that people will spend down at QB this week given the lack of elite options, one line of attack at our disposal is paying up for the remaining elite option in Tom Brady. The Buccaneers are playing in a dome with the highest implied team total on the slate. Brady ranks at the top of the league in virtually every passing statistic as he chases history this year. That creates a floor and ceiling combination nearly unmatched by any other QB. Yet despite this productivity, DraftKings still hasn’t bumped his price into the $8K heights.

Stacking Brady always presents a difficult decision between Mike Evans and Chris Godwin. Both are excellent plays. Godwin sees more targets, but Evans’s 13.5 (No. 11) Average Target Distance makes up for that disparity. With the Colts favoring a grind the clock approach with the run, the tiebreaker for Bucs WRs goes to Evans this week as the more explosive playmaker in a game where possessions may be a bit tight.

In case you didn’t hear from the man himself, Cam Newton is back. Those who played him last week despite some questions around a snap split with P.J. Walker were rewarded to a vintage Cam passing and running day. With sole possession of the QB1 spot in Carolina now, Cam re-enters the conversation as one of the top Konami Code QBs with his passing and cheat code rushing ability. DraftKings appears to have missed that memo however only adjusting his price up to $5.6K. As a result, Cam projects to see fairly heavy play this week. As discussed last week, a popular QB is not a deal-breaker, but you need to be conscientious of that with the rest of your lineup decisions. 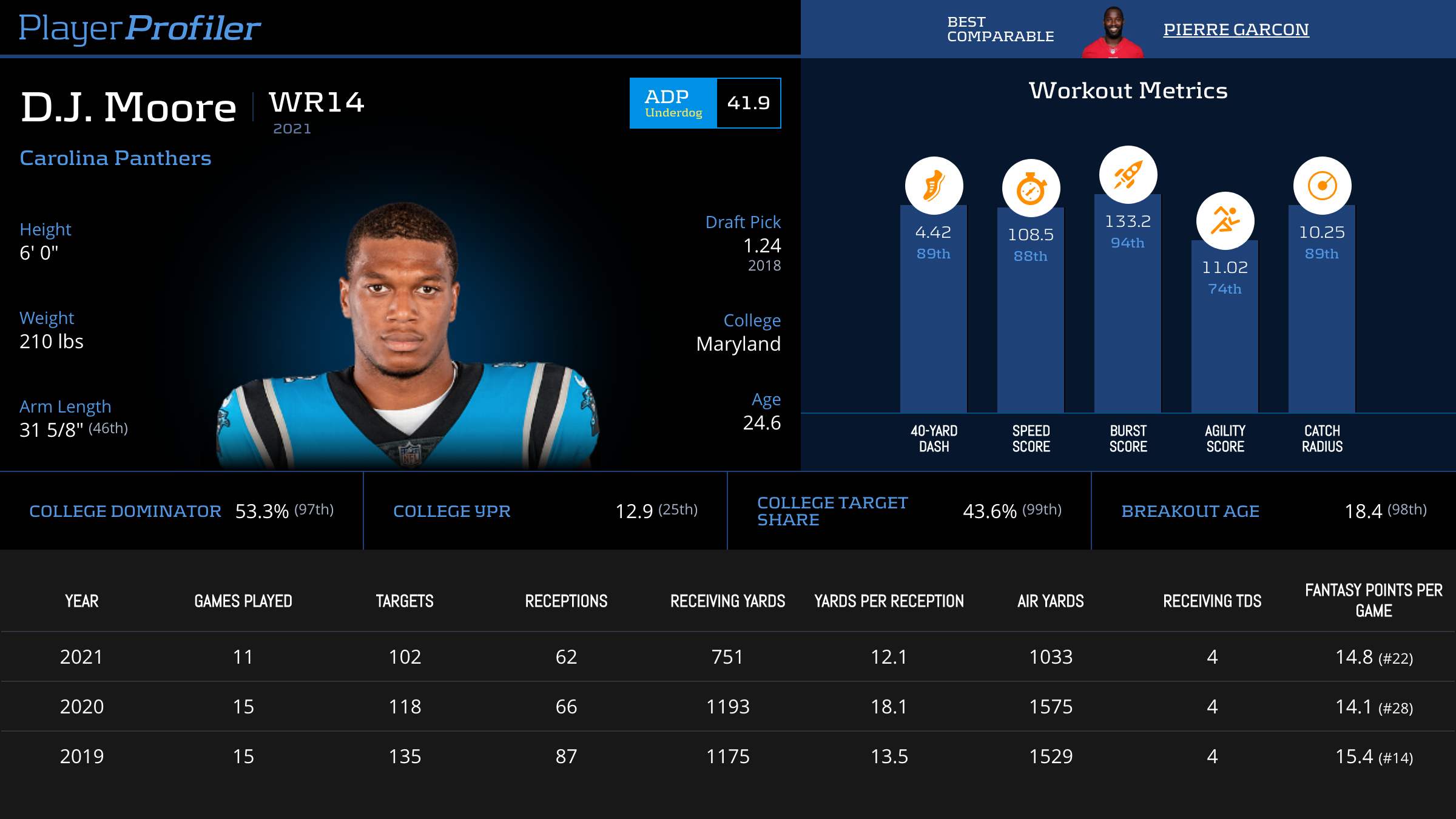 It’s been an up then down and now possibly back up season for D.J. Moore. He finished as a top 12 WR in three of the first four weeks. Since then, he’s had no finishes inside the top 20. The volume is still there, though. He hasn’t played a game with less than seven targets good for fifth most Targets, and his 39.9 Air Yard Share ranks No. 8. With a new (and old) QB back under center, Moore projects as an exciting option at only $6.2K.

Our final stack features Justin Herbert and Keenan Allen. Herbert has been a maximally volatile QB this year for fantasy scoring. His 39.4 (No. 3) Attempts per Game alleviate Game Script sensitivity. Despite steady passing attempts (always between 34 and 47), Herbert has shown the ability to cash in via touchdowns to produce top QB scores on the week. Efficiency (and touchdowns especially) are volatile and unpredictable. Herbert put up those slate leading numbers against intimidating defenses (Steelers/Browns).

That’s the profile we seek for GPP tournaments. The Broncos are not an appealing matchup. Between the opponent and demonstrated bust risk, Herbert’s roster share should be kept in check. That gives us a strong leverage play on the field. The top-heavy reward structure of GPP tournaments demand us to shoot for the moon. Herbert gives us that upside while still maintaining enough differentiation in our lineups.

Allen has re-cemented himself as the target hog in Los Angeles. His price has crept back up into the mid 7K’s, but he’s the one you want to have for the Herbert boom games. Ranking third in Targets and fifth in Red Zone Targets but with only two touchdowns, Allen should positively regress in the touchdown department. After finishing within the top 20 each of the last four weeks, he’s set to really explode if the touchdowns follow.