It turns out the greatest players in the sport have pretty high ceilings! Last week was a perfect illustration of the strategic edges available in playoff DFS. Patrick Mahomes and Josh Allen, considered by most the two best fantasy quarterbacks in the sport, combined for over 83 DraftKings points. Nonetheless, they combined for less than 15-percent ownership in most contests. Dak Prescott and Joe Burrow were egregiously overplayed by managers chasing the over-under.

In the playoffs, every one of these offenses has a ceiling and every defense can find ways to limit their opponent. Last week in this column, we pointed out the factors surrounding consolidation of ownership in playoff slates. Allen was cited as one of my favourite plays with a ceiling disproportionate to his ownership. Moving forward, the game theory principles of this column which led us to Allen and Mahomes last week, can now be refurbished as justifications to pivot away from these two in the slate’s highest owned game.

Let’s get to work!

A Note: This column focuses primarily on the strategy and game theory elements of DFS. I do not discuss the individual matchups of players. Instead I am basing my stances on what the field is expected to do, and how to capture a similar ceiling with a unique build. I outline my general approach here:

Last week’s column began with an overview of strategic adaptions for playoff slates. I will list them below, but please check out the column for an in depth explanation behind each.

Five of the league’s six most pass-heavy teams are playing this weekend. Correspondingly, the running back position is a DFS hellscape.

The pass-heavy approach of the Chiefs, Bucs, and Bills will never work in the playoffs once January rolls around https://t.co/fBkAUjAB4s pic.twitter.com/u33b3L9OtB

The two highest-projected options are both coming off significant injuries in Leonard Fournette and Derrick Henry. Beyond our two returning heroes, the outlook is bleak. While Buffalo, San Francisco, and Cincinnati’s backfields are predictable, each of the Chiefs, Rams, and Packers lack a sure bet to lead their team in touches. Even among the most stable plays on the slate, Elijah Mitchell and Joe Mixon, are Game Script-dependent running backs with limited roles on passing downs.

What the slate lacks in rushers, it more than makes up for in wide receivers. The three highest scoring receivers from the regular season are all on the slate, none of which are Tyreek Hill or Stefon Diggs. The existence of two high-end options in the slate’s highest total game at modest prices is one of the key inflection points of the slate this week. On that note, let’s dive into the divisional round slate!

As with last week, I will centre the column around a key inflection point of each game in the four-game slate and how to react.

Will the Real Ryan Tannehill Please Stand Up?

Ryan Tannehill has had an underwhelming season for the Tennessee Titans. After two years of QB1 level performance, the Titans pivot topped 20 DraftKings points just three times. On a slate with so many prolific gunslingers, can you really roll with Tannehill?

Prior to the year, our excitement regarding Tannehill was based in his high-efficiency paired with elite weapons. Due to injuries, he had very little opportunity to play with his trio of elite skill players, or even just his two top receivers. For the first time since Week 7, all of Derrick Henry, A.J. Brown, and Julio Jones will on the field for the Titans. While I am loath to attack the first game of a playoff slate, my exception may be with Tannehill. Play the former Aggie stacked with A.J. Brown and a bring back of your choice and you ride with a unique construction generating leverage off Joe Burrow and Derrick Henry.

Just 10.9% of Ryan Tannehill's dropbacks this season came with all of D. Henry, Arthur Juan, and Julio on the field. He averaged 9.4 Y/A on those plays.

The greatest advantage of a Tannehill stack is the salary you are afforded for the rest of your lineup. By taking a low-priced quarterback and forgoing the highest-priced running back, you have access to more salary to spend on elite wide receivers than any other lineup. Even if Tannehill is outscored by Patrick Mahomes or Josh Allen, if you can hit a combination of ceiling at wide receiver not accessible to an Allen or Mahomes lineup due to salary, your path to victory is cleared.

If I tell you Davante Adams and Deebo Samuel are likely to fall under-owned on this slate, your first reaction may be to laugh in my face. I understand that. However, think about the construction process on this slate in the context of game-totals and the salary cap.

The highest-total game on the slate is Bills-Chiefs. That game also features the two highest-scoring quarterbacks in fantasy football and last week’s top options. If Patrick Mahomes and Josh Allen stacks make up a plurality of the lineups in the field, they are sure to drag Stefon Diggs and Tyreek Hill with them in game stacks. Both are priced down to $6,600 and $6,500, making each an attractive play. If you are playing either or both in a stack with their quarterback, you simply run out of slots and salary to also play Adams and Samuel.

Packers-49ers is a high volatility game with two slow-paced teams. However, the high-level skill players in this game provides a ceiling which will not be efficiently rostered in DFS contests. In their earlier meeting, these teams lit up the scoreboard for 58 combined points. In a similar shootout,  it is plausible Adams and Samuel are the two highest scoring receivers on the slate. I will also be over-weight vs. the field on Aaron Rodgers, Aaron Jones, Brandon Aiyuk, and George Kittle in this game which offers asymmetric upside for its projected ownership.

The Running Back Hospital

The early game on Sunday could feature two sub-$6,000 workhorse running backs with pass-catching upside. Cam Akers‘ miraculous return from injury on Monday night leaves us with plausible upside at his $5500 salary. On the other side, Leonard Fournette at $5900 is by far the best point per dollar option on the slate should he regain his pre-injury role.

However, neither is my favourite option in this game. 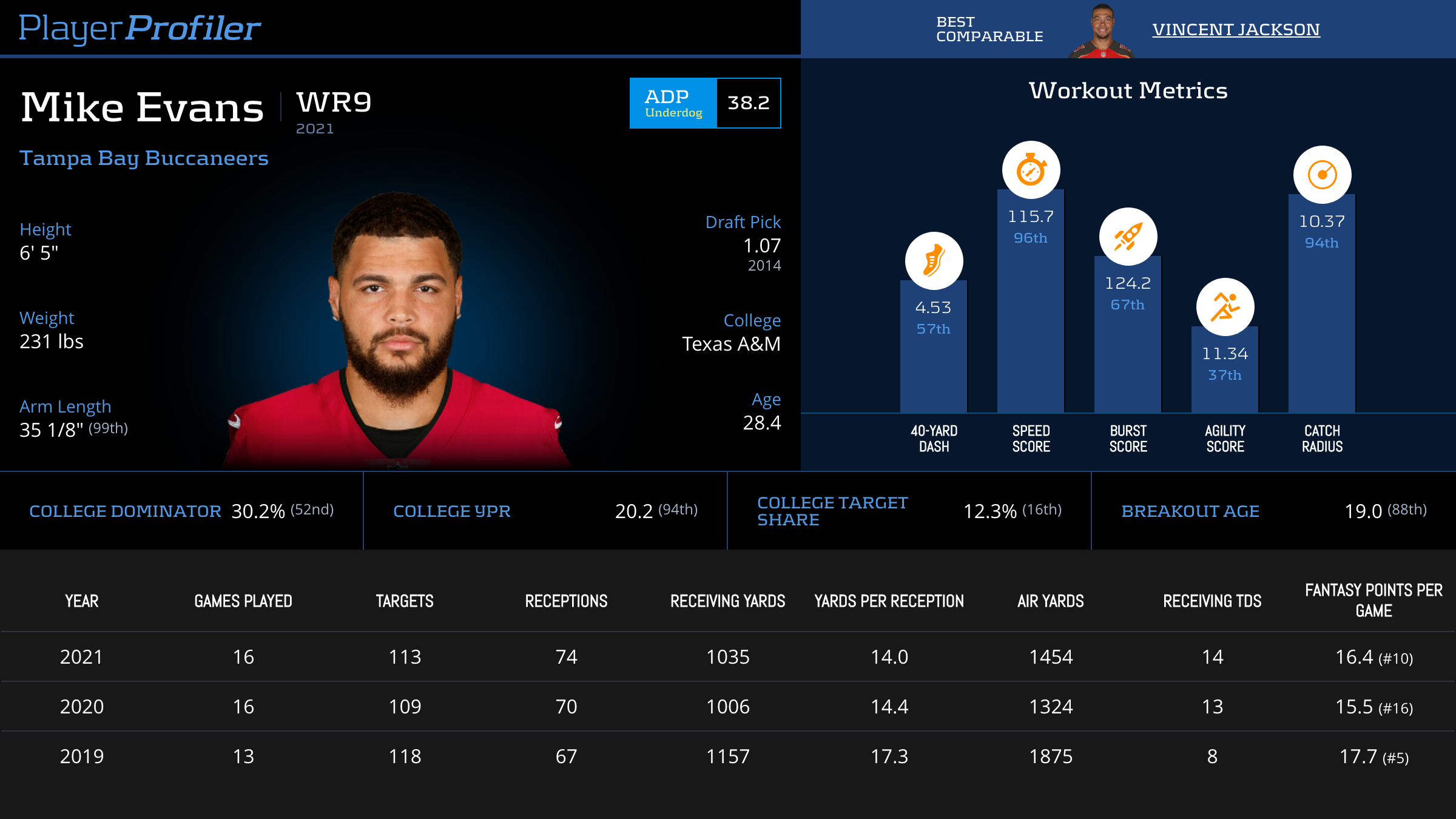 Mike Evans served as a true target hog in his 2022 playoff opener. Posting a 27-percent Target Share and 3.16 yards per team pass attempt, Evans was one of the most dominant receivers of the weekend. However, priced just above Tyreek Hill and Stefon Diggs, I’m unsure people will be excited to click on Evans in a possible matchup with Jalen Ramsey.

There is good reason for ownership to consolidate on the discount running backs in this game but I’ll be attacking the passing options. Against a pass funnel defense, this is the perfect time to go back to Matthew Stafford stacked with Cooper Kupp. Bring it back with Mike Evans for a stack with sly-high ceiling and reasonable ownership.

The Bills and Chiefs are not the only teams on this slate among the league leaders in pace and pass rate. Rams-Buccaneers is your easiest pivot to capture much of the same ceiling.

Hold on for Dear Life

If this week goes well for me, I expect to be holding down solid finishes going into the final game as a tidal wave of ownership seeks to overtake me. Make no bones about it, Bills-Chiefs is a perfect game to stack. The pace, the pass-rates, the offensive talent, and the tight spread are what DFS dreams are made of. However, you are not the only one privy to such information.

Any case to be underweight on this game starts with general principles of uncertainty. Even the best bets fail often enough that you should take the other side if the reward is disproportionate to the likelihood. In what percentage of simulations is the Bills-Chiefs game the highest scoring on the slate? Likely in a plurality of them it is, but certainly not a majority.

There is also inherent fragility in this game that may not be accounted for. Isaiah McKenzie and Gabriel Davis have earned roles in the Bills passing game, leaving Buffalo with seven viable pass-catching options. Even if this game goes as expected, there is no guarantee your Josh Allen stack hits on the winning combination of Bills. On the other side, ancillary options outside of Tyreek Hill and Travis Kelce have seen a larger cumulative Target Share of late. None, however, project as strong enough plays on their own. If we compare this game to others, especially Bengals-Titans and Packers-49ers, it features two of the least condensed offenses. Even if this game features more total fantasy points than others, what percentage of those are being consolidated into the top options in your player pool?

Devin Singletary will be heavily-played and the lone chalk-piece in this game I will be overweight on. Two touchdowns of Singletary stolen from Allen and his receivers goes a long way to suppress the ceiling of game stacks. On the other side, I am willing to rock with Jerick McKinnon even if Clyde Edwards-Helaire makes his return. McKinnon is simply faster and more explosive than Edwards-Helaire in all phases and the Chiefs may choose to continue with the hot hand.

We just added playoff gamelogs that you can view for FREE on https://t.co/SMxUYrSc3B

Go to a player page, scroll down to the “Advanced Metrics” section, then click on “Game Log”

Curious about Jerick McKinnon’s snap share and routes run in the Wild Card round?

For the second straight week, we have a playoff slate featuring an abundance of brilliant players and fascinating strategic decisions. Good luck chasing the bag this week!