Shout out to the Fantasy Football Madcaps out there… the 2021 NFL season is finally here. Drafting season has come to an end, and now begins the long grind that determines whether or not all of the hard work has paid off. All of the research and countless articles read, the metrics studied over and over again, all of it. Now is the time. Of course, that hard work is nothing a little injury can’t derail, right? Have no fear; the waters (or fires, rather) will be much easier to navigate with the return of The Infirmary!!!

Let’s begin with the travesties that occurred before now.

The running back position was hit hardest this preseason and it all began with second year favorite, Cam Akers, who tore his Achilles during a workout. Darrell Henderson became the hot name, with Xavier Jones and Jake Funk getting a bit of love as well. After the dust settled, and Jones suffered a season ending injury himself, Sony Michel was brought in from New England to solidify the depth chart. And really, it cost the Rams practically nothing since they don’t seem to care much about draft picks.

While some (including this particular writer) have never sworn by Michel, one simply can’t ignore the former Patriot’s efficiency last year. He ranked No. 1 among qualified running backs in Yards Per Touch (6.5) and No. 2 in True YPC (5.2); impressive, considering the team faced an average of 7.3 (No. 6) Defenders In Box. In New England, Michel was one of too many cooks in the kitchen; in Los Angeles, however, he forms a nice duo with Henderson on what should be a high-octane offense. His stock is on the rise.

Akers wasn’t the only high profile back to go down, however. That would have even mercy. No, instead fellow sophomore J.K. Dobbins and rookie Travis Etienne (Lisfranc) will join him in the Infirmary. The Ravens also lost Dobbin’s teammate Justice Hill, which led to the signing of a run-down Le’Veon Bell. Yuck. Gus Edwards will lead the way with Ty’Son Williams in the mix. Though Jacksonville does have James Robinson (and Carlos Hyde? Yuck again), the football world is a lesser place without an Etienne rookie season. Geez, the Jags are gonna be bad again, huh? On to wide receivers.

If You Can’t Handle the Heat…

There’s drama in the Bayou, and Michael Thomas is at the forefront. The star wideout’s decision to opt for ankle surgery in June didn’t sit well with the Saints and Coach Sean Payton. Thomas was paced on the PUP list, and won’t be eligible to return until after Week 6; at which point Marquez Callaway may have a firm grip on the No. 1 chair. Rookie Rashod Bateman was placed on Injured Reserve after surgery for a groin injury, but is eligible to return after week 3. Bateman is just what the doctor ordered for Lamar Jackson and the Baltimore offense. The sooner he’s back, the better.

Then there’s T.Y. Hilton, who recently underwent surgery to fix a neck issue, will return to the Colts at some point this year, but like Thomas, could he be out of a job? Parris Campbell won’t shove Hilton out the door, per say, but the time with Colt’s new quarterback Carson Wentz (and time without Hilton around) gives the younger Campbell a perfect opportunity to shine. Sure, he’s dealt with his fair share of injuries, but if he’s able to stay on the field, the ingredients are right for the third year receiver to make some noise. Let’s not forget the dude’s player profile. 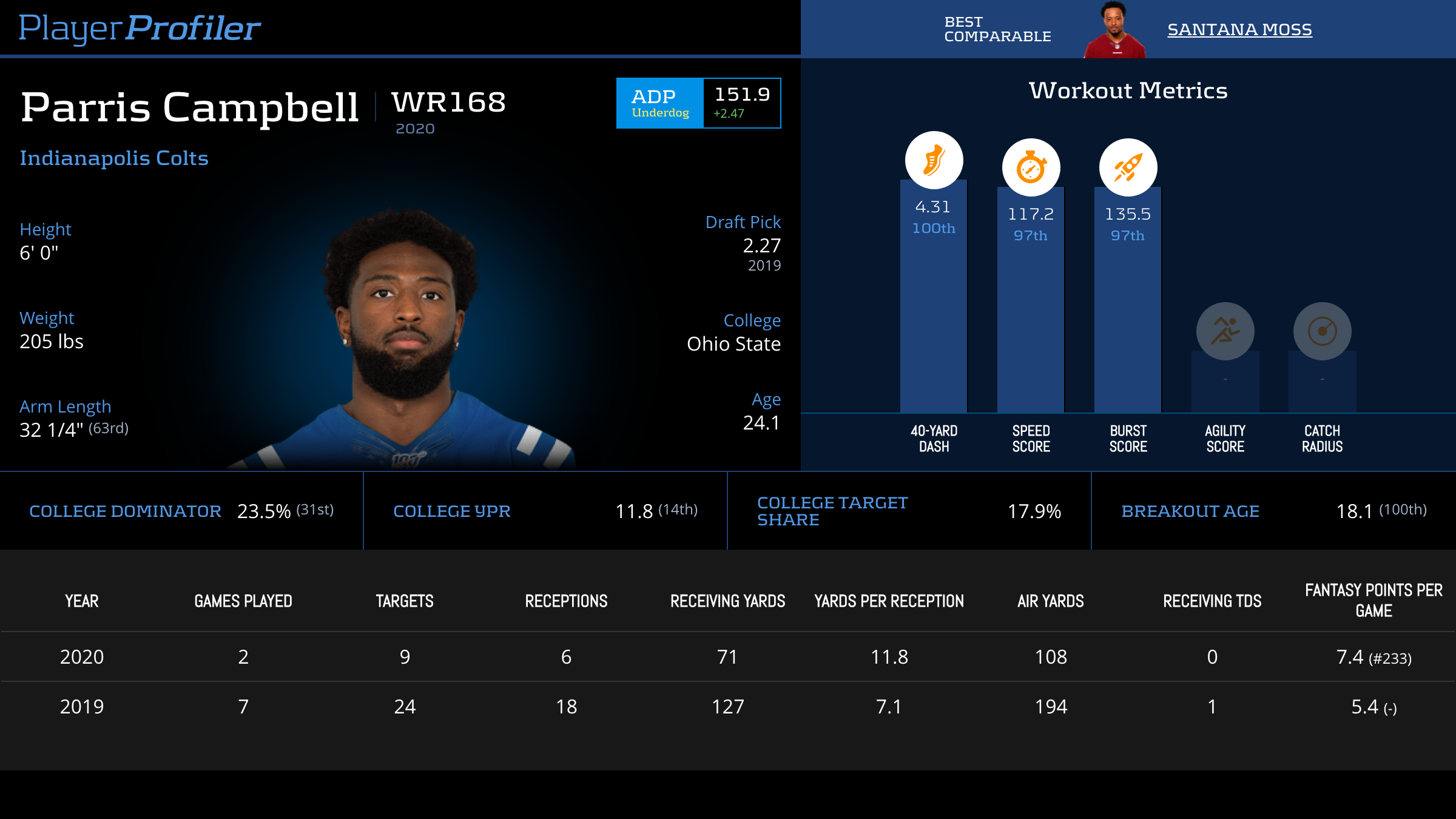 The Vikings’ Irv Smith was the big tight end name to hit the Infirmary, after he suffered a meniscus injury during the team’s preseason finale against the Chiefs. While Tyler Conklin is interesting, and Chris Herndon came in via trade, look for Adam Thielen and Justin Jefferson to get a bump here. Speaking of bumps, give a bump to the aforementioned Wentz, who will indeed be starting week 1 after successful foot surgery. On the more concerning side is the status of the Giants Saquon Barkley and Kenny Golladay. While both are likely to play Week 1, expectations should be tempered. This will, of course, be addressed further in the Infirmary Week 1 report.

Let’s first take a look at the opening game of the 2021 season; tonight’s showdown between the Dallas Cowboys and the defending Super Bowl champs, the Tampa Bay Buccaneers. Both teams appear to be close to full health heading into the opening contest. However, the word to pay attention to is close. Sure, there was some worry over Dak Prescott’s shoulder injury during training camp, and when a team consults an MLB team you can bet there is a cause for concern. The Cowboys quarterback seems ready to roll now though, and he’ll need to be ready facing off against the Tampa Bay defense. The real issue lies with the Dallas offensive line.

For the season opener, Dallas will be without it’s top offensive lineman; tackle Zach Martin. Now, Martin isn’t missing the game due to an injury, but rather because of a positive Covid-19 test, which flung him into the Covid protocol. The Pro Bowler was vaccinated, but will still need two negative tests before returning to the team. Ouch. That’s a tough spot for the Cowboys offense, considering the level the Bucs defense finished at last season. It could also mean a rough night for Ezekiel Elliott. More importantly, it’s a reminder to all fantasy managers that Covid is still here, and ready to play its part. Like the 2020 season, roster depth will be key for survival down the stretch.

Just like every other NFL season, there’s been blood spilled before the grind even begins. Injuries are never a good thing, but they do provide opportunity for others. Finding the “others” that are worthy is a key to success. In this way, 2021 is much like other years in fantasy football. The difference this season is, oddly enough, the same as last seasons; Covid-19. Roster depth, and a bit of luck, will play it’s role in each team’s success. Still, the idea of a positive test on game day to any star payer is terrifying. We’re in for anther wild one, so buckle up and crank the AC to Max. The Infirmary could get crowded.