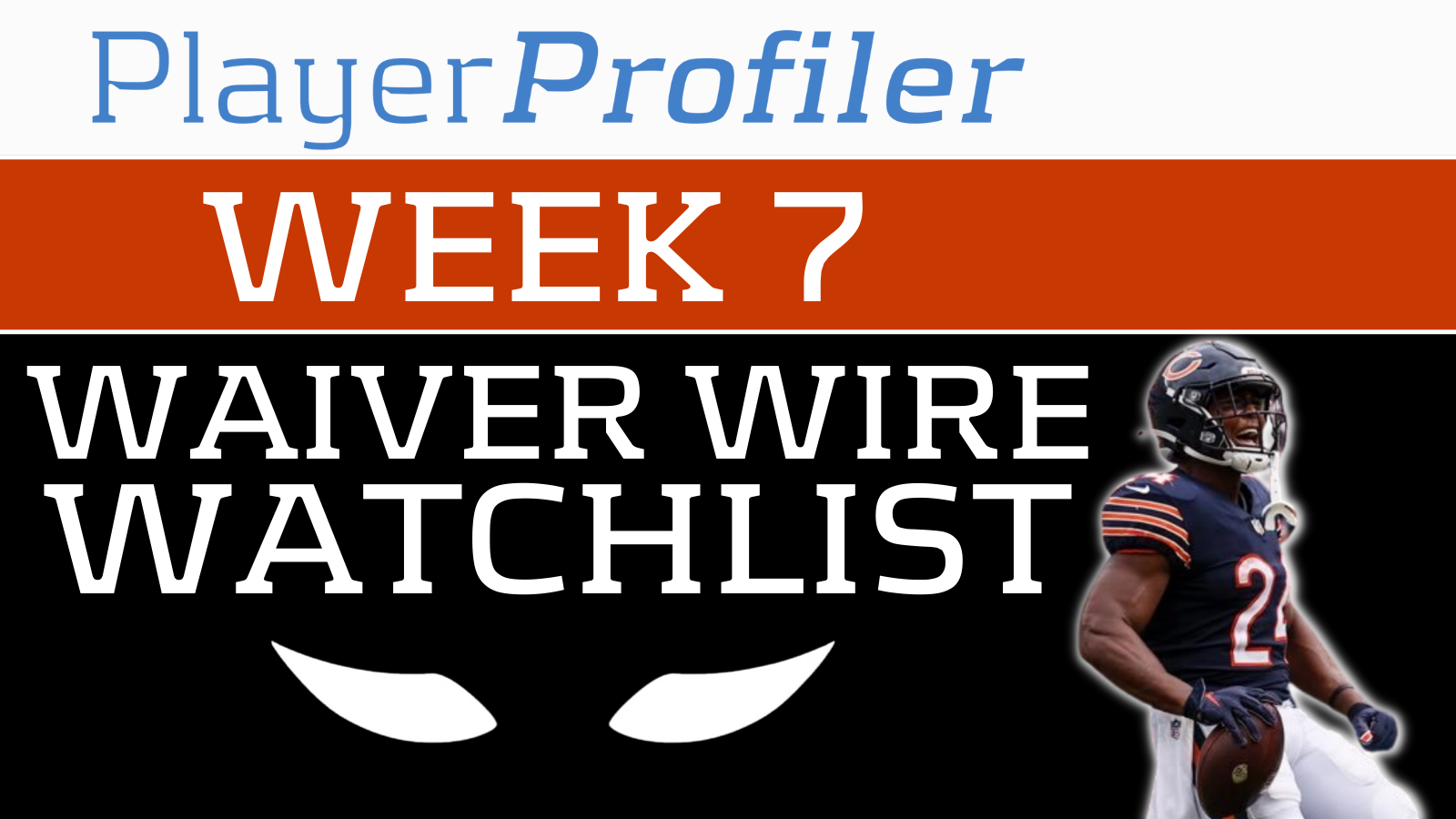 Every week in this article, we discuss the recent injuries and bye weeks. Week 7 could be a perfect storm of both since we have both bye week hell and countless injuries that continue to mount up. Six teams will be on a bye (Los Angeles Chargers, Buffalo, Dallas, Pittsburgh, Minnesota, and Jacksonville) which will be the most of any week this entire season.

Regarding injuries, there are several players where we lack clarity as to how injured they are and whether or not they will play in Week 7. But we are waiver wire grinders. We want to act ahead of the news and not chase the same player’s everyone in our league wants.

If you have many players that are on a bye week, hopefully, you have some bench options you can use. But if you do not, some of the players listed will be players to add and potentially start. If you do not have a lot of players on bye, still be active this week. Price checking your league mates can prevent them from getting a player they desperately need for cheap.

It is also essential to pay attention to who is cut this week. If your league-mates did not plan accordingly for the multiple byes, you could see someone cut that is possibly a stronger addition than anyone on this list. Strange things happen in fantasy football when players are desperate and unprepared. The additions made during the secondary waiver runs could be very fruitful this week.

Last week we looked at QB streamers, but if you have bye week players like Dak Prescott, Justin Herbert, or Josh Allen as your starting QB, you still may need to add one.

This week has plenty of options:

As a look ahead, next week has only two teams on a bye: Baltimore and Las Vegas.

Derek Carr may have been dropped in some shallower leagues. He was solid this past week in the Raiders’ post-Gruden win over Denver after two lackluster performances. He has a great matchup this week and looks for his fifth 300-plus yard passing game of the season at home against Philadelphia.

Justin Fields saw signs of life last week against Green Bay. This week looks like a potential breakout game on the road vs. Tampa Bay.

Tua Tagovailoa came back from injury and showed no signs of rust with his best performance of the year in London. This week he has a plus matchup against a beatable Atlanta defense. If you need a streamer, he is very much in the discussion.

Bye Weeks are here, and Week 7 is the biggest of the year!

✍️ @al_scherer article from August addressed just that, check it out and be prepared for NEXT week!

Khalil Herbert may still be available in some leagues. We recommended Herbert last week and hopefully, you have him rostered. If he is somehow still available, he may have taken over Chicago’s RB job with his strong performance against Green Bay. He rushed 19 times for 97 yards and a TD and added two catches. He looks explosive and instinctual as a runner. This week, Damien Williams may or may not be off the COVID list, but Herbert is an ascending player who is earning more and more opportunities.

Khalil Herbert in a bell-cow role..

J.D. McKissic could be available in some shallower leagues. Antonio Gibson left Sunday’s game with a shin injury, and McKissic saw 10 targets. Last season he finished as a RB2, and would immediately be an RB2/Flex in any game that Gibson misses.

A deeper league add. Jaret Patterson would see an increased snap share as a compliment to J.D. McKissic if Antonio Gibson were to miss time. Washington liked Paterson enough to cut Peyton Barber this preseason as the No. 3 RB.

Some lower level values but one injury away from being in the lead possible waivers:

If you have a free spot, always smart to stash potential volume-based RB2/3 before Sunday kickoff

Nick Chubb and Kareem Hunt (out for at least a month) both look like they will most likely miss Thursday’s game against Denver. D’Ernest Johnson would be the heavy favorite to lead the team in RB snaps and touches. He could also carve out a role when Chubb returns, picking up some vacated Hunt touches.

Contrarian play to D’Ernest Johnson. Demetric Felton should see pass-catching opportunities. He is a stronger addition in dynasty.

Demetric Felton has lined up as an RB on two snaps this season. He is a receiver.

Felton could provide relief a few times on passing downs with Kareem Hunt out, but doubt it amounts to much.

D’Ernest Johnson is the clear back to roster Thursday night if Nick Chubb can’t play.

Chris Carson is on the IR. Alex Collins performed well as his replacement and looks to be the starting RB, but Rashaad Penny was ahead of him during training camp, and the former first-round pick is a favorite of Pete Carroll’s. Penny is a speculative addition that makes for a strong long-term stash. DeeJay Dallas looks to strengthen his role as a pass-catching back coming off of a five-catch performance.

Rashod Bateman was recommended as an addition in previous articles and now I am stomping my feet for you to please add him. This past week, he was tied for a team-high six targets. The Baltimore offense is humming, and Bateman could quickly become a weekly starter. Get him rostered before the inevitable breakout game.

Rashod Bateman tied for first on the team with a 24% target share in his season debut. 🔥

Played 89% of long-down-distance snaps, which is a good sign.

Donovan Peoples-Jones is coming off a 101-yard and two TD catch performance. He has now produced two games in a row. He is worth a speculative add, but keep him on your bench to see how his role solidifies.

Holy smokes. Baker Mayfield launches a Hail Mary and Donovan Peoples-Jones comes down with it! pic.twitter.com/EucELAu2lq

This is our weekly reminder to add Tim Patrick if he is available. He caught another TD this past weekend and has been a quiet producer for multiple games now this season. He is a usable player as long as Jerry Jeudy is out (Jeudy is coming off of the IR, but looks to likely miss Thursday’s game against Cleveland).

Zach Ertz started off week six on a high note, catching a TD on Thursday Night Football. But the highlight of the week for him fantasy-wise was a trade between Arizona and Philadelphia that will send the three-time Pro Bowl TE to the high-flying Cardinals. Ertz gets to play with one of the league’s best QBs in Kyler Murray on one of the best offenses in the gam. He should be a back-end TE1 for the rest of the season.

The Podfather (@Fantasy_Mansion) has you covered with an under-the-radar add at the top of his waiver wire list 👀 pic.twitter.com/4uql3G6Ct8