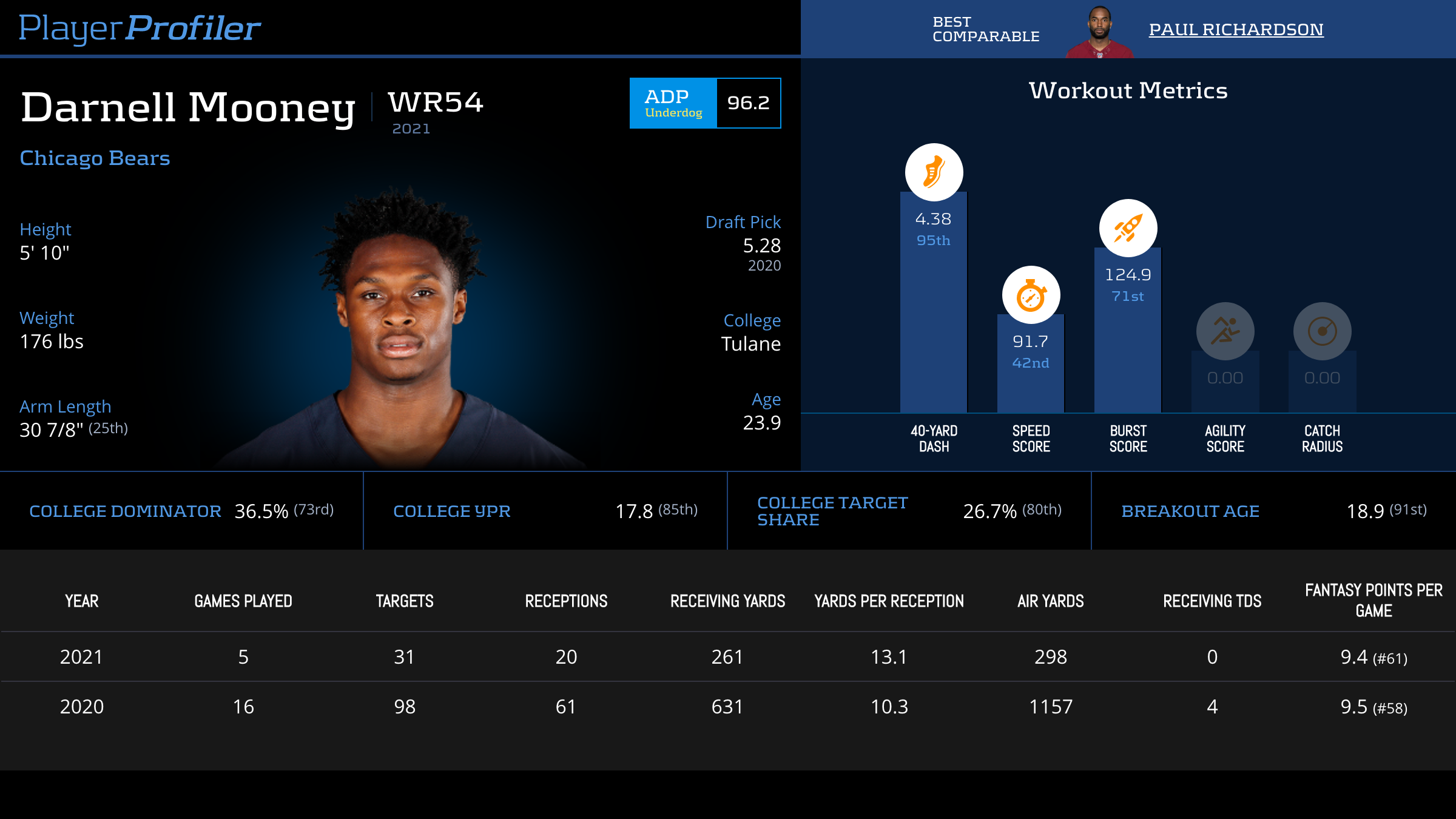 The Buccaneers secondary is banged up right now, with Carlton Davis, Sean Murphy-Bunting, and more out now. Despite the Eagles’ lackluster performance against the Bucs secondary, Tampa still allowed nearly 500 yards through the air combined to New England and Miami Weeks 4 and 5. Allen Robinson has started slow, but saw 7 targets last week, his most since Justin Fields took over as starter. Darnell Mooney saw 8 targets in Week 6, and averages over 6 targets per game this season.

Shout out to @MicheleSteele – on #FFNOW this morning reporting from the GB-CHI game she highlighted Darnell Mooney as a player she had heard would be a focal point & who fantasy players should start. He led team w/ 8 targets & finished 5 for 45 with a touchdown. 15.5 fantasy pts. 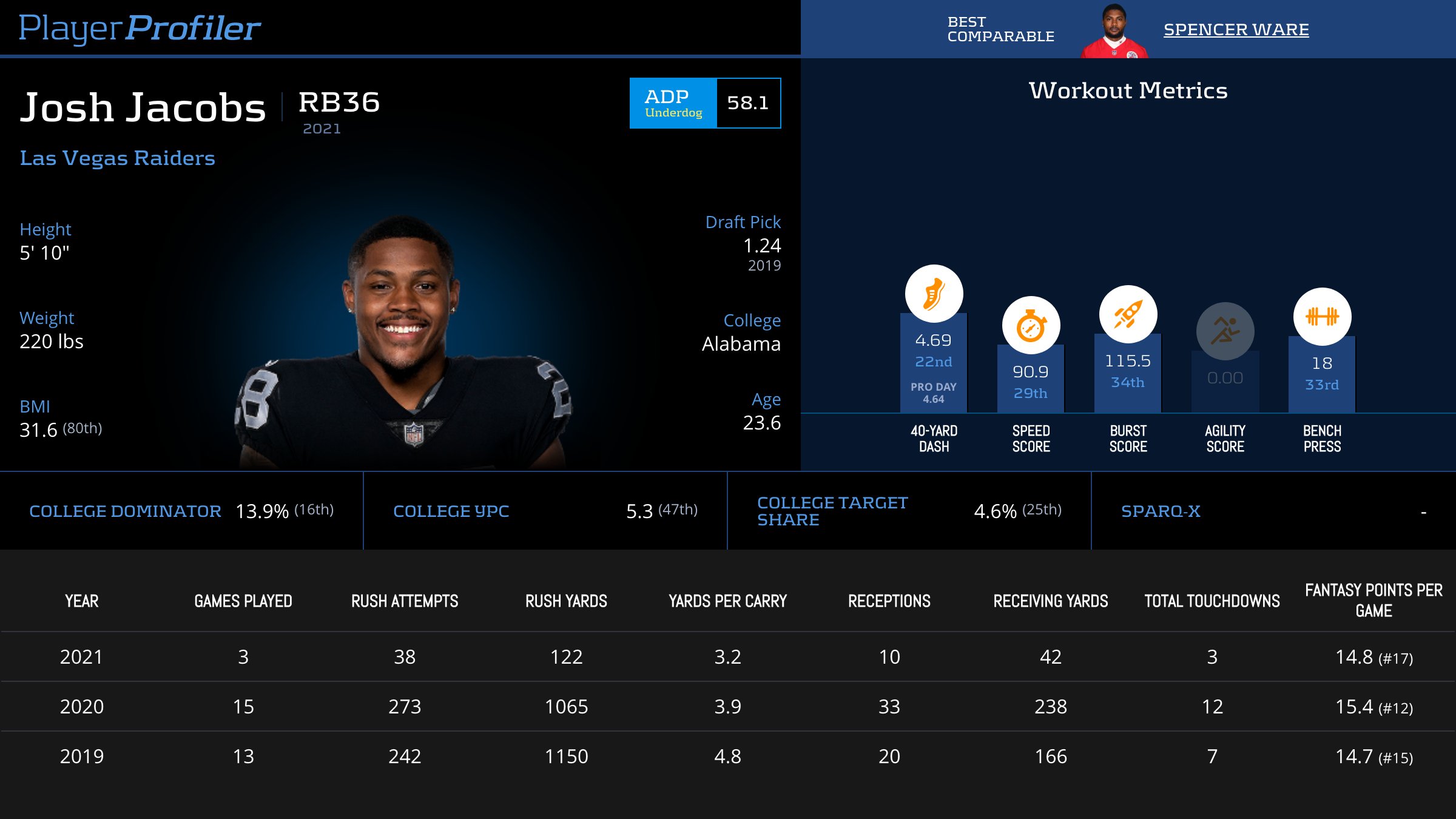 Josh Jacobs has not been efficient this year, averaging 3.2 (No. 65 among qualifying RBs) True Yards Per Carry prior to Week 6, in which he averaged 3.3 yards per carry. However, he sees high volume, with 54 total touches the last three weeks. The Eagles allowed over 120 total yards to Leonard Fournette last week and have allowed four straight games with 80-plus rushing yards given up to a lead RB. Philadelphia has also allowed 4 or more receptions to RBs every game this season. While Kenyan Drake is generally the primary pass-catching back, Jacobs has 11 receptions in four games this season and will continue to see targets from Derek Carr. Jacobs is set up for a great matchup against Philadelphia Week 7. 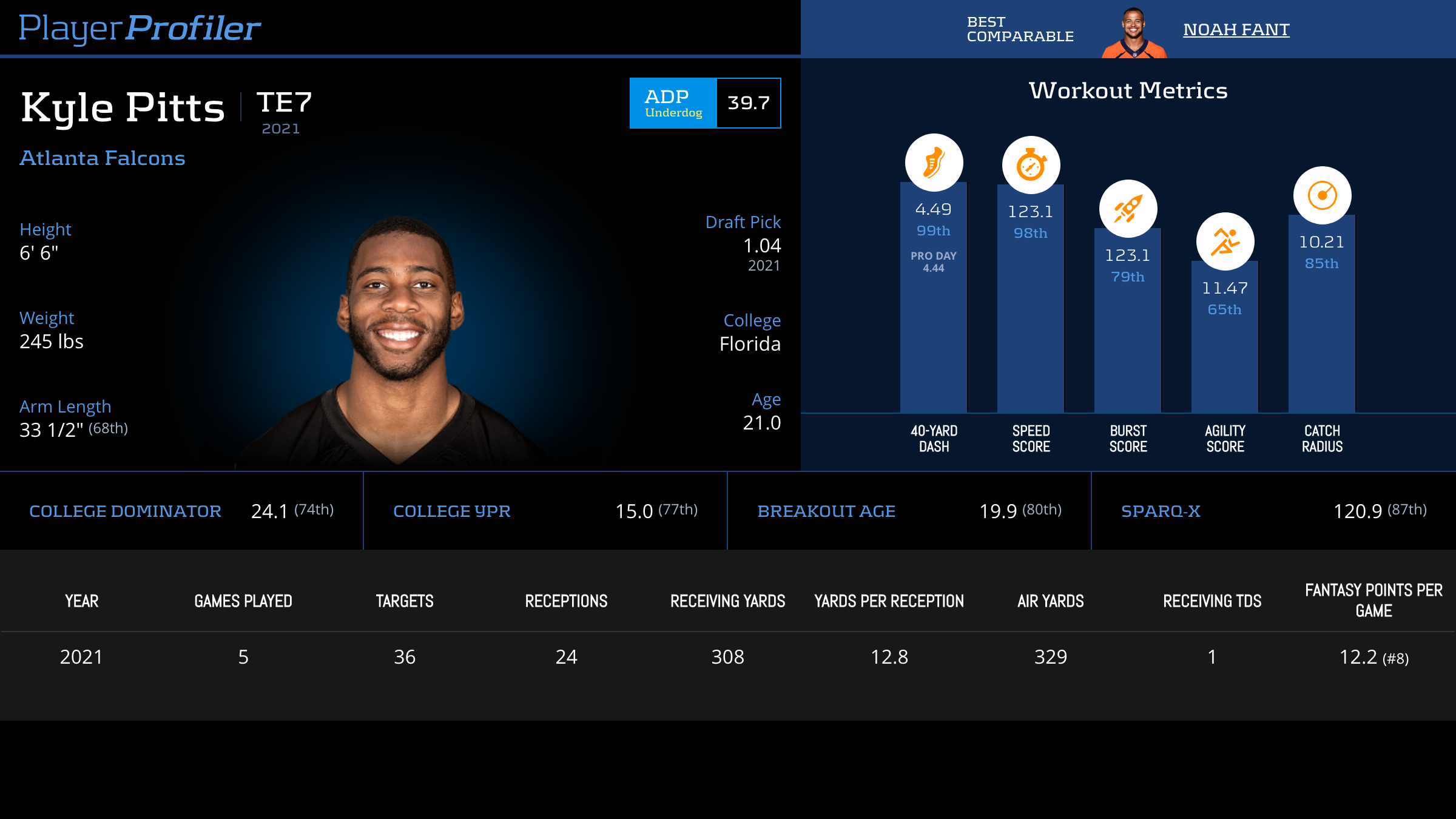 As football chatter suggests, Kyle Pitts is a tight end in a wide receiver’s body. While Pitts has disappointed a little for fantasy, he broke free week 5 with 119 receiving yards and still has one of the best young tight end profiles in football. Miami has allowed over 300 yards through the air in three of the last four weeks, with opponents generally in a pass-heavy Game Script against them. Atlanta’s pass-catchers are sparse, with Pitts, Calvin Ridley, and Cordarrelle Patterson the only players with at least 30 targets this season. Pitts is averaging about 7 targets per game, and with his build, he presents a mismatch for the Miami defense. Coming off a bye, he is in a good spot to pick up where he left off for Week 7.

Kyle Pitts has been 21 years old for 8 days.

Through 5 games, he has the second most receptions (22) and third most yards (308) among rookie TEs in NFL history. 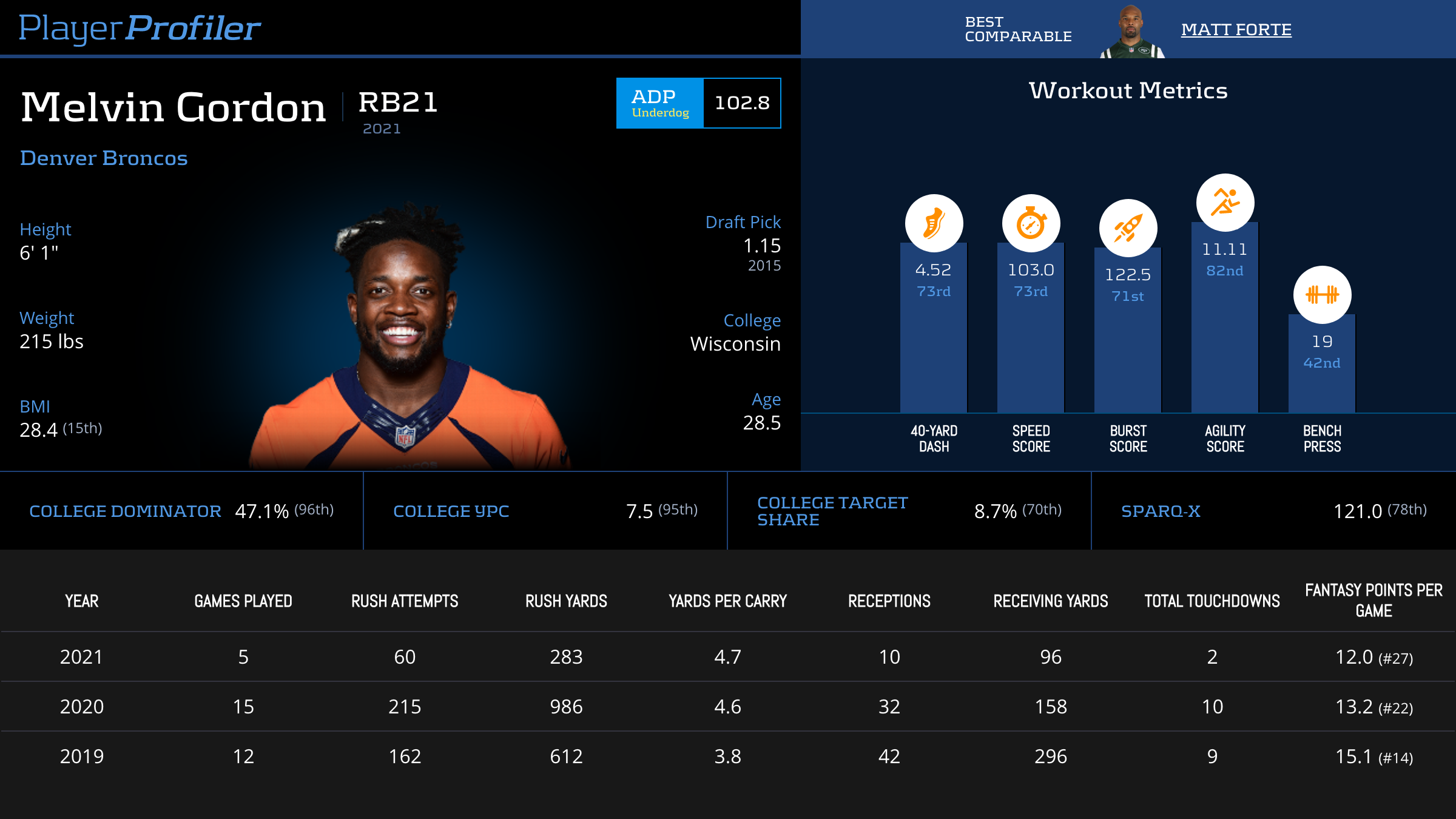 Denver’s backfield is a near split with Melvin Gordon and rookie Javonte Williams. Fantasy managers are rolling with Gordon still, but Williams has made a sizeable dent with highlight-reel rushes the last few weeks.

Additionally, Cleveland’s defense is solid against the run, not yet allowing a 75-yard rusher. Browns linebacker Jeremiah Owusu-Koramoah will be out for this game, so Gordon may have a better time as a receiver, but the Cleveland front seven is still large, quick, and formidable. Gordon has not seen more than 13 touches since Week 3, and with the Browns’ suffocating defense on the schedule, he does not stand to have a favorable Week 7 for fantasy. 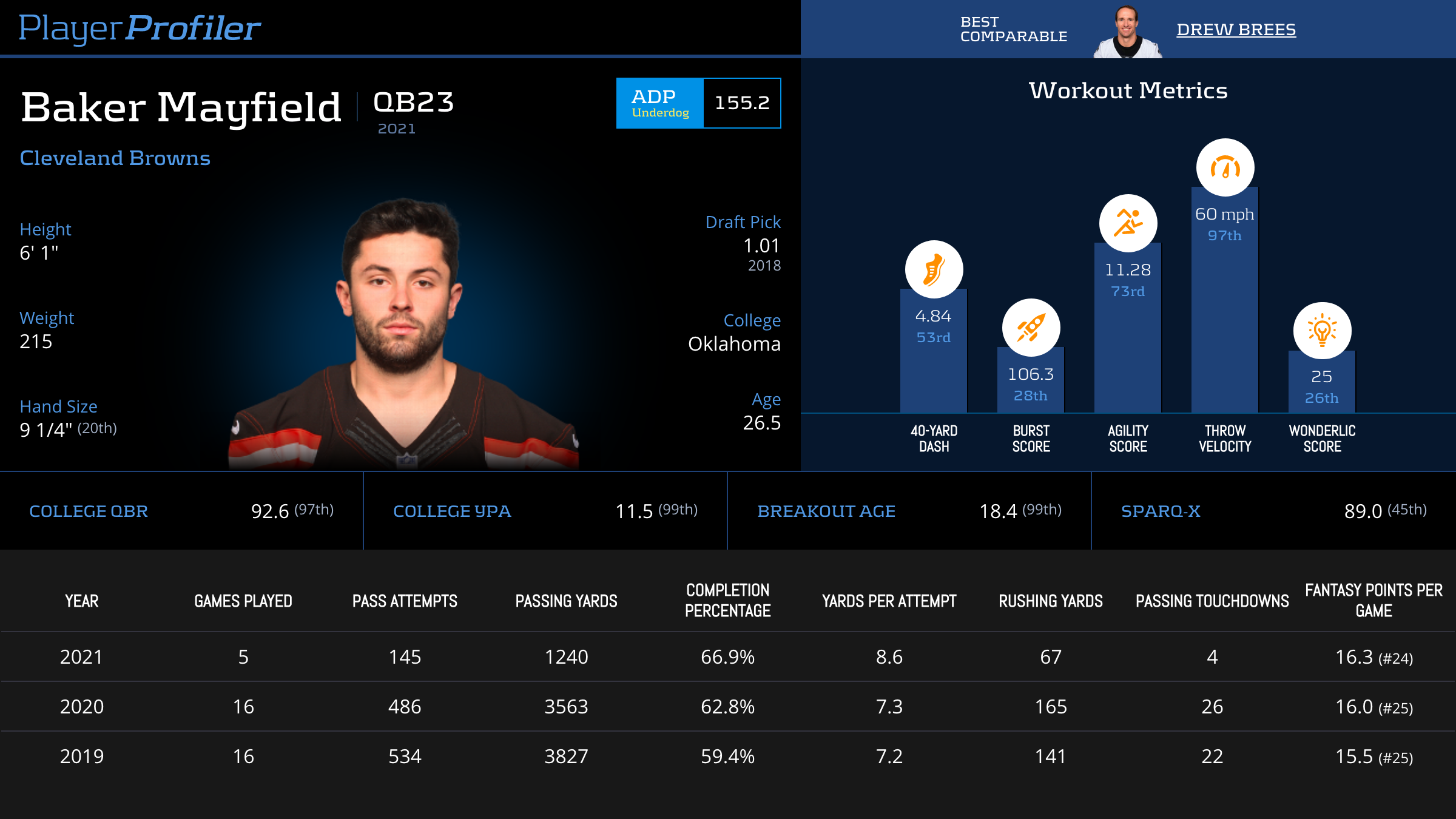 Baker Mayfield has been average throughout the beginning of this season. For fantasy, Mayfield averaged 16.3 (No. 24) Fantasy Points Per Game prior to Week 6, where he put up just over 12 fantasy points. He also had a 69.8-percent (No. 23) True Completion Percentage and a 7.1 (No. 28) Accuracy Rating prior to Week 6. Mayfield also was hurt in last week’s game but has said he will play through it as of this writing (if he doesn’t, obviously don’t start him).

#Browns QB Baker Mayfield says he'll continue to play through shoulder injury, "just have to find a way for it to get better"

The Broncos have been up-and-down against opposing QBs this year, but have only allowed 7 passing touchdowns this year. With Von Miller coming off the edge and both top Cleveland RBs hurt, Mayfield may be running out of the pocket often. There is legitimate concern over Mayfield playing through injury, and with how pedestrian he has been this season, he is not set up for fantasy success against Denver this week. 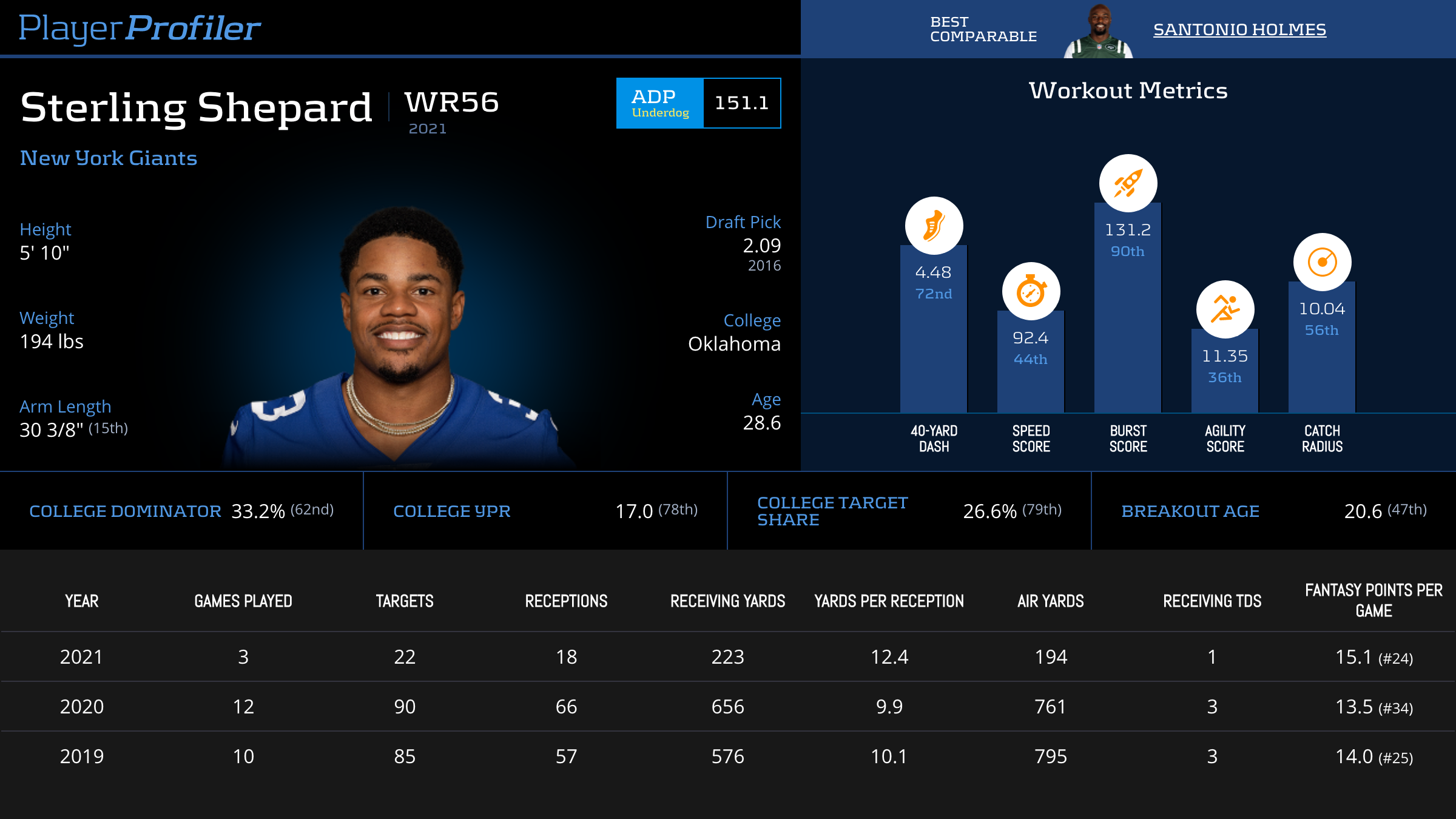 The Giants are still a scuffling team, and their wide receiver corps has been ravaged by injury. Kenny Golladay and Kadarius Toney highlight the injuries, leaving John Ross and Collin Johnson with significant opportunity. Sterling Shepard is left standing, but will likely face one of Donte Jackson, A.J. Bouye, or C.J. Henderson (if healthy). The Panthers allowed less than 200 passing yards to opponents four of the last five weeks. A Week 6 Vikings matchup broke that streak (Kirk Cousins threw for over 370 yards). Despite a bad performance against a great Vikings WR corps, the Panthers secondary has been sneakily solid against opposing WRs. Now they face Daniel Jones, who has 4 touchdowns to 4 interceptions this season. Shepard and the limping Giants WR corps is not in for a good matchup this week.