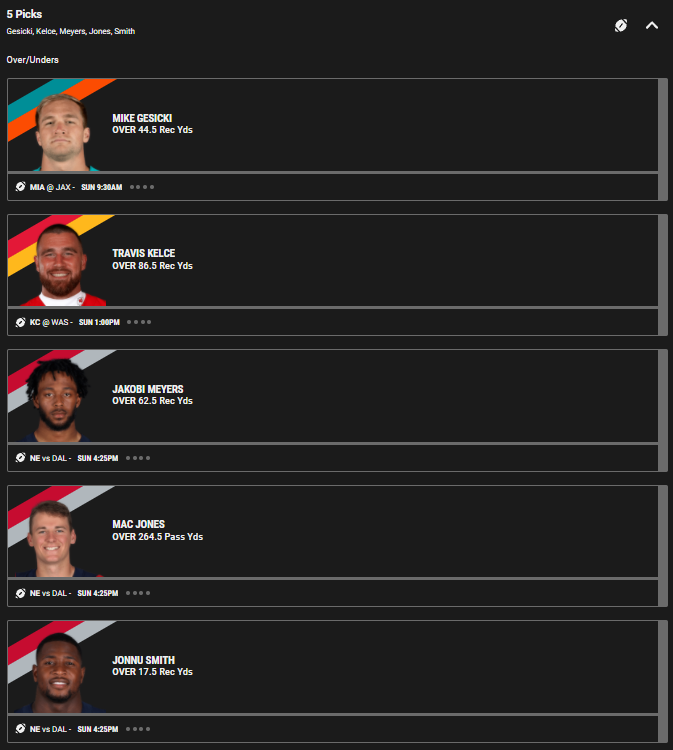 Kansas City is coming for redemption with a staggering 30.75 implied team total and Travis Kelce will undoubtedly be a driving force behind their success. Kelce has an impressive 23.1-percent (No. 4 among qualified TEs) Target Share, turning this opportunity into 10 targets last week against Buffalo. Moreover, these targets have translated into elite production this season, displayed by his 30 (No. 1) receptions and 183 (No. 1) yards after catch.

Only $7,000 on DraftKings and Tyreek Hill likely OUT

Kelce has been above $8,000 all season and just ran 49 routes against BUF

Currently salivating at 35+ routes against this feckless WAS secondary pic.twitter.com/ELyA6ZfMaC

Washington allows 293.4 passing yards per game, so it’s a lock that Kelce, the top-option for Patrick Mahomes, will get his in a bounce back game this weekend.

Take the over on a wide receiver who is masked as a tight end. Mike Gesicki’s position-leading 133 Slot Snaps and 140 (No. 6) Routes Run are metrics indicative of a wide receiver, not a tight end. Additionally, his 17.0-percent (No. 2) Hog Rate means that he is receiving a high Target Rate in relation to his Snap Share. Therefore, when this “TE” is on the field, he is being utilized in the passing game more often than not.

Smash the over on Mike Gesicki OVER 44.5 receiving yards in a cake matchup against the hapless Jaguars.

Vegas projects the Patriots and the Cowboys matchup to be high scoring and competitive, with a 51.5 over and the Cowboys being only a 3.5 point favorite. As a result, Mac Jones and the Patriots will look to move the ball through the air against a Cowboys defense that has allowed the second-most passing yards through Week 5. And throwing the ball isn’t out of the ordinary for Mac Jones, exhibited by a 38.4 (No. 9) Team Pass Plays Per Game average. Jones has also been fairly productive, with 742 (No. 12) Completed Air Yards and an excellent 8.2 (No. 1) Accuracy Rating. I expect this to be a sneaky shootout, which is why I’m taking the over on 264.5 passing yards for Mac Jones.

Jakobi Meyers has the opportunity and volume with a 93.6-percent (No. 6) Snap Share and a 24.6-percent (No. 20) Target Share to crush the 62.5 receiving yards line on Underdog Fantasy. On top of this, Meyers will be facing off against subpar cornerback Jourdan Lewis. Lewis has a +15.1 (No. 101) Coverage Rating, meaning that he is targeted frequently by opposing quarterbacks and he is unable to effectively break up or intercept these targets.

No. 1 passing option + below average defender = 🔨

While Smith’s 54.8-percent (No. 34) Snap Share and 12.3-percent (No. 21) Target Share (No. 21) underwhelm, his 35.9-percent (No. 1) Target Rate is impressive. Essentially, he receives about one target for every three routes run. Add in the fact that he has some of the most explosive workout metrics for a TE, and the result is a low-risk correlation pick for a player that can turn a little into a lot.

Overtime and missed field goals killed this pick. It was great to see Joe Burrow with less than 273.5 passing yards in regulation, but a missed field goal from both Mason Crosby and Evan McPherson sent this game to OT, shooting me down from cloud nine.

It was certainly wishful thinking to believe that A.J. Brown would come back from a lower body injury and return to his normal role. Prior to his injury, he was averaging a 36 routes and 8.5 targets per game. In Week 5, he managed only 22 routes and 6 targets. This performance will hopefully teach me a lesson in fading the over on players returning from injury.

This pick hit for all the wrong reasons. I touted Laviska Shenault because I believed that he would receive a bump in targets with the absence of D.J. Chark. However, his 6.75 targets per game through Week 4 dropped to three targets in Week 5. His lone reception of 58 yards bailed me out of this one.

Now this was the pick that truly showcased my brilliance. Indeed, the Cowboys ran a high number of run plays and Tony Pollard benefitted with a season high 14 carries and 4 targets. Moving forward, I’ll continue to hit the over on Pollard when the Cowboys have a high implied team total and when their opponent is projected to trail by a considerable margin.