With two games already lost from the slate due to the NFL’s most recent COVID-19 outbreak, ownership will be even further concentrated. While some fantasy gamers will opt to get contrarian by playing poorly projected players at lower ownership, try overweighting the better plays or finding unique stacking options for leverage instead. 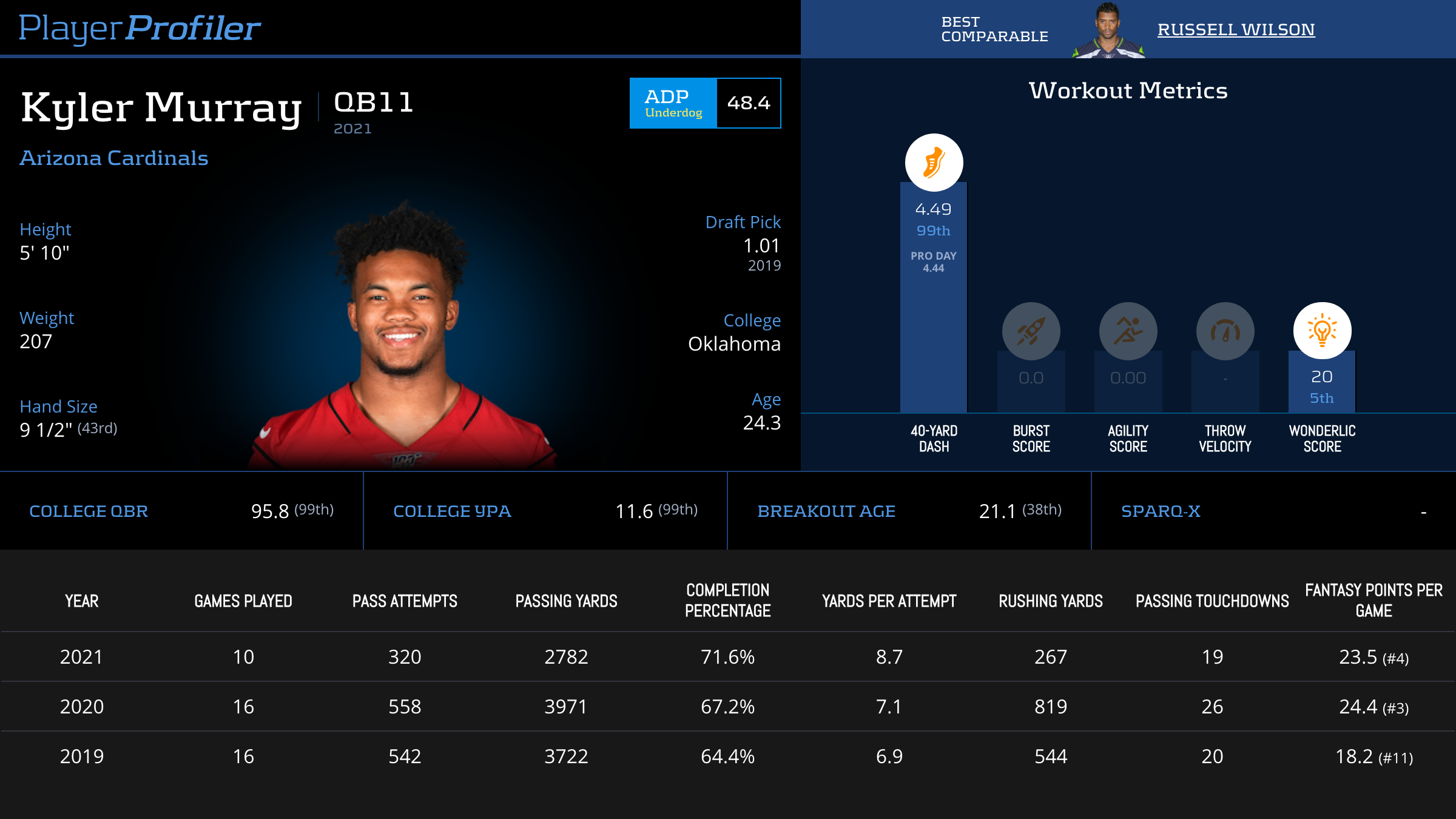 With quality at the quarterback position a scarcity this week, paying up for Kyler Murray makes sense. He has looked good, even revitalized, in his return from an ankle injury that sidelined him for a couple weeks. His ankle seems to be a non-issue too; his most recent games of 7 and 10 Rushing Attempts represent season highs. Expect a lot of Murray rushing attempts facing a Lions team that opponents run on at a 45-percent clip (No. 2). Fade the public and stack Murray with James Conner (expected to play but questionable) instead of Christian Kirk.

With Tua Tagovailoa garnering the most ownership in the sub-$6K range, consider Ben Roethlisberger as a bargain field-separator. While he’s admittedly been banned from my MME this season, he’s in consideration after 4x-ing his cheap salary in three of his last four starts. Teams are choosing to pass on the Titans at a 68-percent rate (No. 2) and allow the No. 7 aFPA to quarterbacks. Pair him with Diontae Johnson and his elite 29.8-percent (No. 3 among qualified wide receivers) Target Share.

Coming off Week 14 as the QB1 overall, Josh Allen is back in play. While the Panthers have been stingy against opposing quarterbacks (No. 29 aFPA), Vegas still likes the Bills to roll (28 point implied total). The Bills rank No. 1 in fantasy points earned by the position due to Allen’s ability to extend the play and his own rushing ability. Running him naked isn’t off the table as he could easily score a pair of rushing touchdowns and not need the stack pairing.

With Elijah Mitchell already ruled out, Jeff Wilson is expected to handle the early-down work against the Falcons. I’m fading him. Wilson has been wholly ineffective as a rusher, with a below-average 3.15 yards per carry in his starts. I’m going out on a limb here and suggesting JaMycal Hasty as a complete tournament punt. 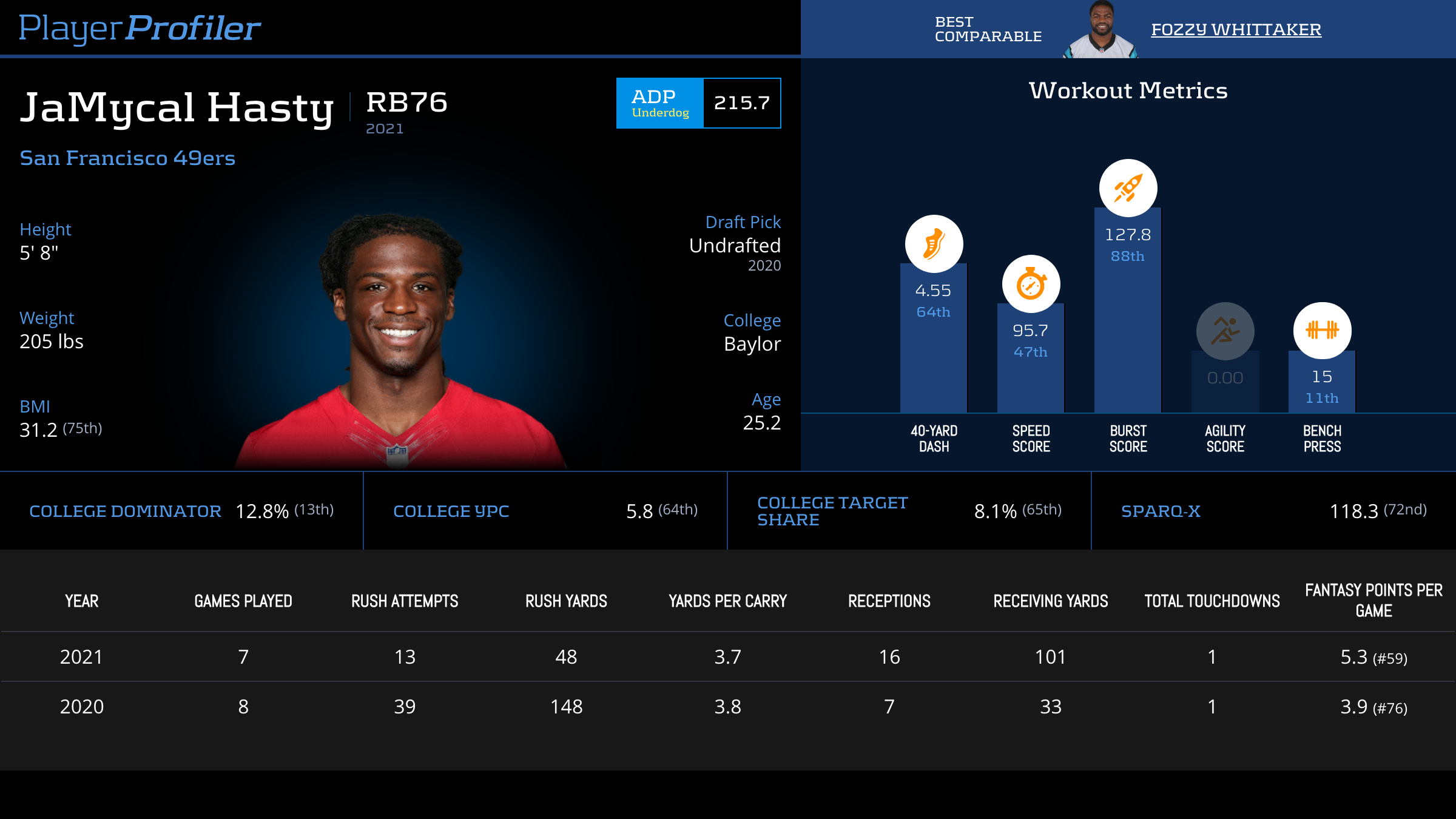 The Falcons have been stronger against the rush with a low 31-percent Rushing TD Percentage (No. 8 lowest). On the contrary, the Falcons allow the No. 7 most receiving yards to opposing backs which is where Hasty will be deployed. Kyle Shanahan has been notorious for his strategic running back usage in the past and a pass-centric game plan could be in the cards. His 127.8 Burst Score is an 88th-percentile mark. At $4,200, he’s a tournament sprinkle to keep in mind.

Regardless if Chase Edmonds is activated from IR, James Conner is still very much in play. The Cardinals have a slate-high 30-point implied team total and some of that should be expected to be earned on the ground. The Lions rank No. 10 or worse in Rushing Yards Allowed (135/gm/avg), Rushing TD Percentage (41-percent), and aFPA (No. 4). He makes for a nice one-off too if you’re fading Kyler Murray in a lineup or two.

Projected as the slate’s RB1, Najee Harris is the top spend-up at the position. With injuries and COVID postponements affecting the slate, Harris stands out given his massive role in the Steelers offense. His 20.0 Weighted Opportunities Per Game, 85.9-percent Snap Share, and 87.9-percent Opportunity Share all lead the position. The Steelers onslaught with Ben Roethlisberger and Diontae Johnson makes for a nice stack.

With Jaylen Waddle ruled out, that opens the door for DeVante Parker to see an increased workload against the Jets. Parker will operate as the 1A for Tua Tagovailoa.

Though his 2021 campaign has been somewhat marred with a nagging shoulder injury, Parker’s 21.4-percent (No. 31) Target Share is a razor-thin second to Waddle. At a $4,300 price tag, Parker’s mis-price can’t be ignored.

Amon-Ra St. Brown needs to be in consideration on volume alone. Logging back to back 12-target outings, St. Brown now faces the obstacle of keeping up with the Cardinals. Arizona will win this game handily, which should allow for some garbage-time opportunities for the Lions. The Cardinals allow a 55-percent Pass Success Rate (No. 8) on passes under 10 yards downfield which is where St. Brown mostly operates. Also note that T.J. Hockenson is done for the year with a thumb injury.

Deebo Samuel will be popular, but is in a fantastic spot against the Falcons. With Elijah Mitchell out, the 49ers will utilize Samuel more as a rusher. Jeff Wilson has been bad, but that’s fine because Samuel has been good running the ball with rushing touchdowns in each of his last four games. The Falcons allow the No. 6 most DKPt to wide receivers too. With so many value plays available, Samuel makes for a logical spend-up.

George Kittle will be massive chalk, but has broken the slate in back-to-back weeks. His 40-percent Target Share in Weeks 13 and 14 are likely an outlier, but his normal Target Share outside of those weeks was still a healthy 21-percent.

I believe this game is the biggest blowout on the slate and would be open to running some three-plus player stacks on the 49ers side of the ball.

With DeAndre Hopkins out for the season with a knee injury, ownership will flock to Christian Kirk. While he’s a nice play, consider Zach Ertz as leverage off the Kirk ownership. Ertz should see an uptick in targets and the Cardinals have that 30-point total in the dome.

Mark Andrews is being largely ignored due to the uncertainty surrounding Lamar Jackson. With so few elite options at the position, though, he’s worth a thought. Tyler Huntley was able to buoy Andrews’ fantasy production off the bench, helping him to his first 30-plus-point fantasy outing since Week 5. His 25.7-percent (No. 3) Air Yards Share, 24.7-percent (No. 2) Target Share, and 81.2-percent (No. 6) Route Participation puts him in elite company.