The Jets secondary struggled last year, and little was done to change that. Their current projected starting cornerbacks are Blessuan Austin and Bryce Hall. Both allowed over 1.4 (outside the top 60 among qualified cornerbacks) yards of Target Separation last season and were Day 3 draft picks. Meanwhile, the Panthers boast D.J. Moore, Robby Anderson, and Terrace Marshall at WR. Moore and Anderson finished top 30 in Fantasy Points Per Game last season and possess Speed and Burst Scores in the 75th-percentile or higher. For comparison, Austin has an 80.7 (8th-percentile) Speed Score and 121.9 (43rd-percentile) Burst Score. Marshall has an alpha build and will face the Jets’ third corner. All in all, the Panthers receivers are set to feast week 1, and they may even be able to help Sam Darnold to fantasy relevance.

Is Sam Darnold the sleeper QB we should be talking about? Panthers quietly have the best trio of WRs in the league.

Marshall is the alpha stud with speed 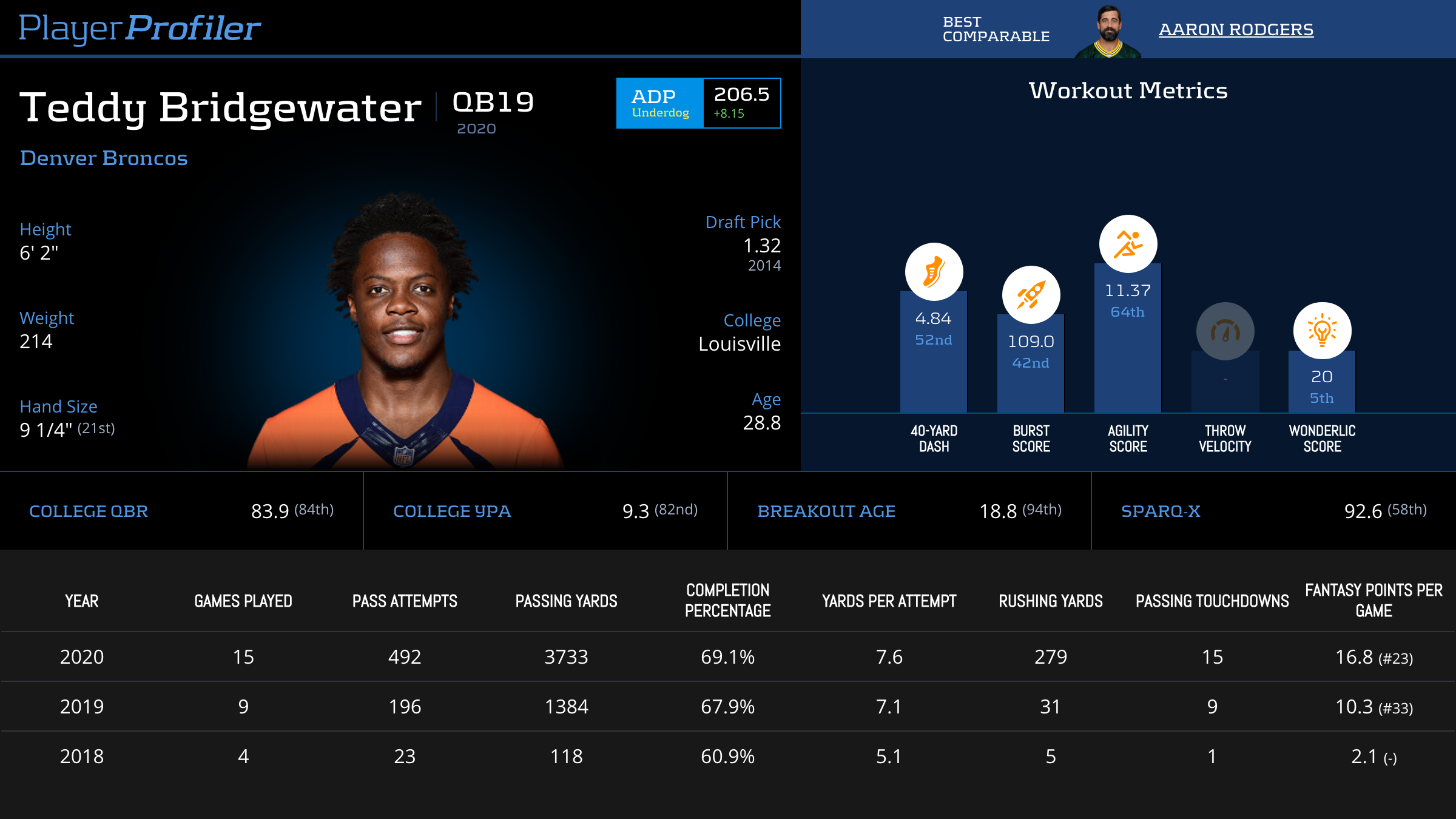 The Broncos will get more offensive opportunities than average in this game. The Giants defense was middling last season and starts a strong secondary. However, the offense looks atrocious and is likely to trail often. The defense won’t be terrible but will get put back on the field consistently with the offense’s failures, leading to more possessions for the Broncos and wearing down a good not great Giants defense. Teddy Bridgewater achieved a 7.87 (No. 2) Accuracy Rating and a 75.89-percent (No. 4) True Completion Percentage last season with a receiving corps of D.J. Moore, Curtis Samuel, and Robby Anderson. Bridgewater gets a corps of similar, if not better, talent in Denver with Courtland Sutton, Jerry Jeudy and Noah Fant, along with Javonte Williams and Melvin Gordon, both upgrades over last season’s RB, Mike Davis. Bridgewater is in an excellent Week 1 spot, and should draw attention from those looking for QB streaming options.

As I'm digging into some #FantasyFootball data via @rotounderworld
👀Teddy Bridgewater ranks 1st with a 7.9 Accuracy Rating & 20th with a 91.4 True Passer Rating 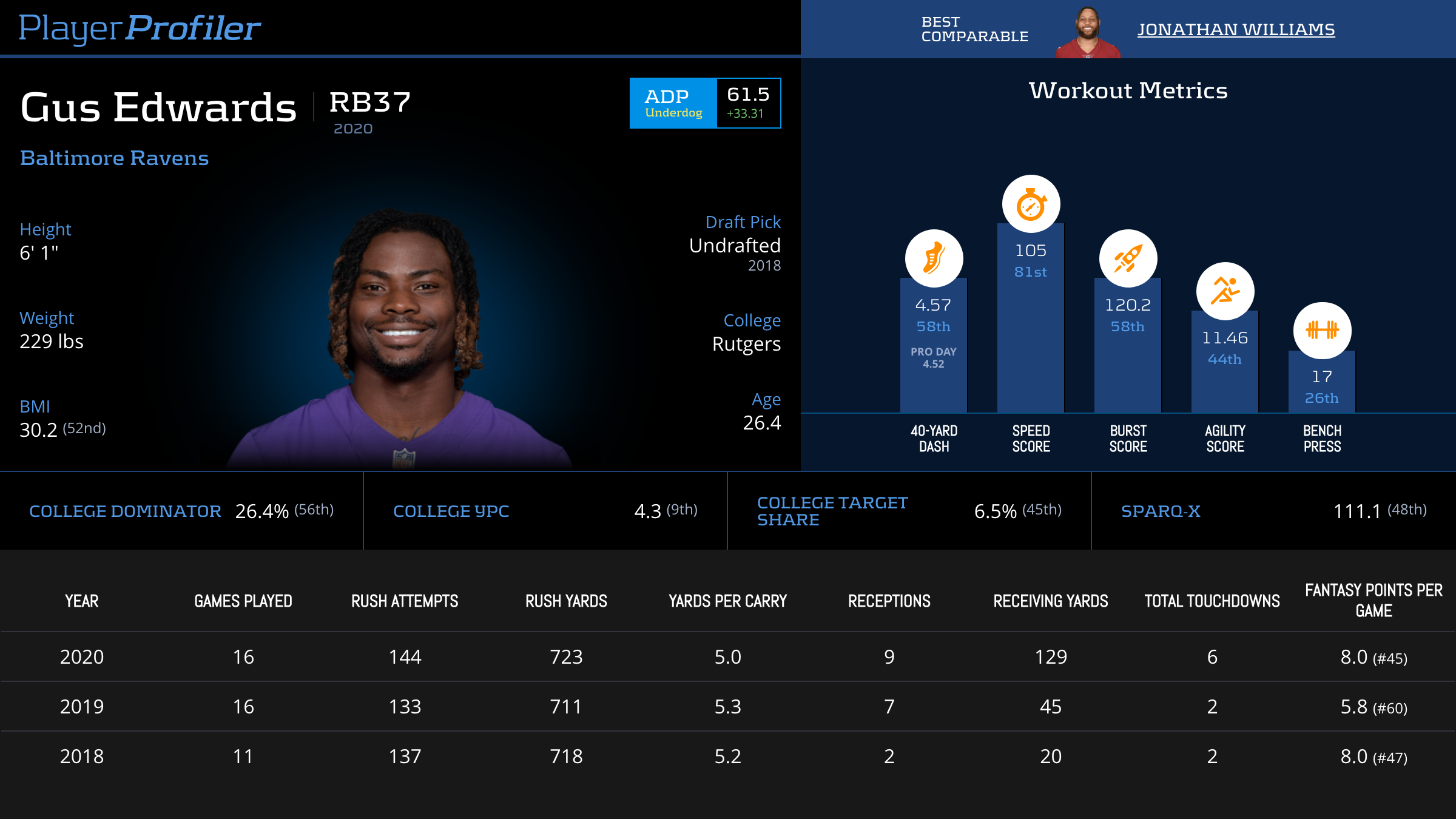 With the devastating injury to J.K. Dobbins, Gus Edwards is now the lead back in Baltimore. While Lamar Jackson will get his fair share of rushes, Edwards is Baltimore’s downhill rusher. He had a 6.25-percent (No. 7) Breakaway Run Rate last season and ranked top 10 in True Yards Per Carry every year of his career. Week 1, Edwards faces a Raiders defense who struggled mightily last season, ranking No. 25 in yards allowed and No. 30 in points allowed.

Las Vegas added Yannick Ngakoue and Solomon Thomas on the edge, but the defensive line lacks flare to stop the bruising Edwards. Projected starting defensive lineman Johnathan Hankins and Quinton Jefferson combined for 3 tackles for loss last season. 33-year-old Gerald McCoy hasn’t played since 2019. Nicholas Morrow is the only Vegas linebacker with speed comparable to Edwards’ speed. While he won’t get receiving work, Gus Edwards’ explosiveness will show in Week 1. 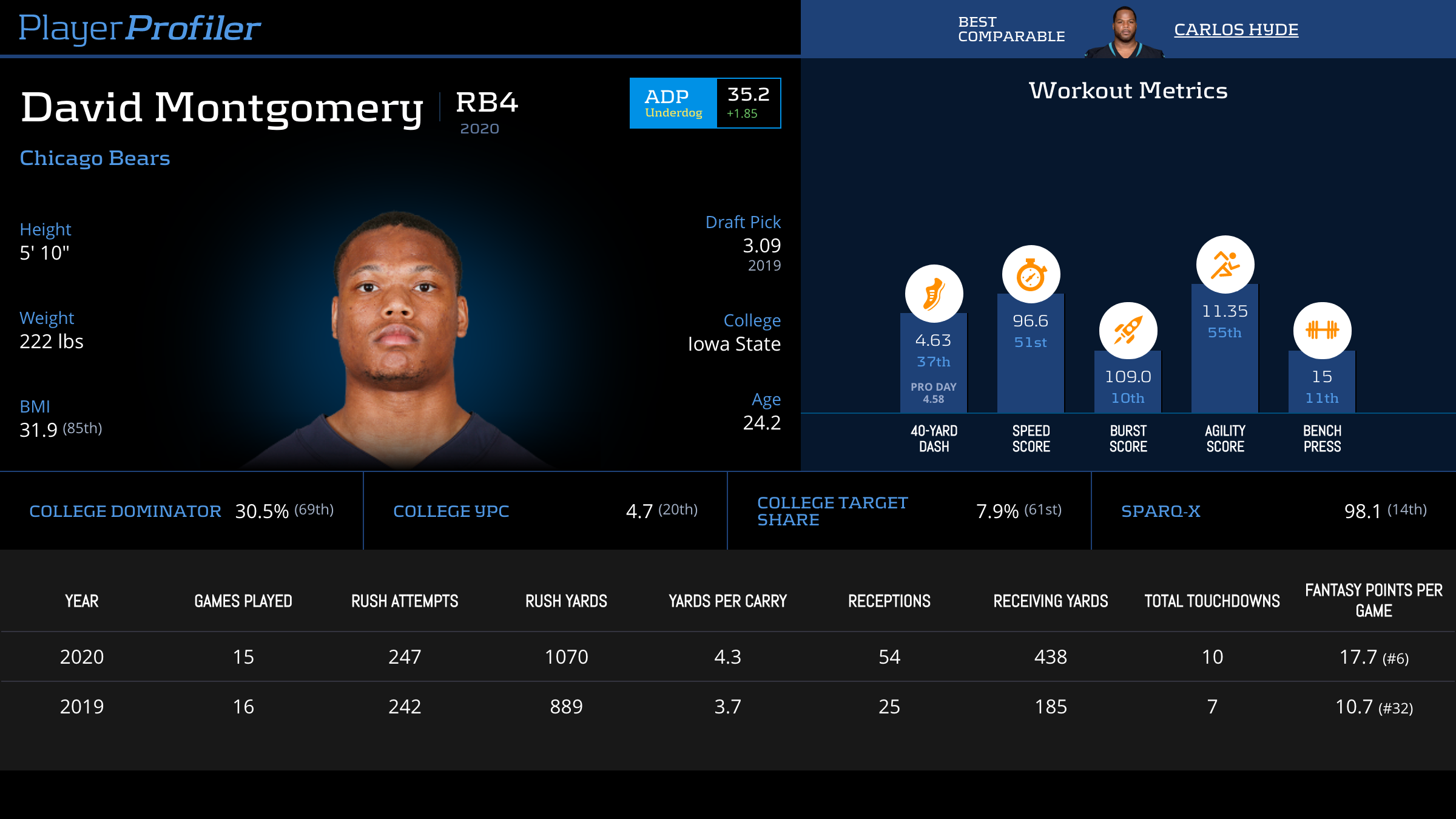 The Los Angeles Rams boast a top-tier defense headed by Aaron Donald. The Bears, meanwhile, are still (as of this writing) rolling out Andy Dalton Week 1 behind a shaky offensive line that lost rookie tackle Teven Jenkins. While David Montgomery surged at the back half of last season, he won’t be set up for success with Dalton and an iffy o-line against Donald and company. Donald’s Speed and Agility Scores are in the 98th-percentile or higher. He will get lots of attention from the o-line, leaving holes for guys LBs and DBs like Troy Reeder and Taylor Rapp to track down Montgomery with their 11.14 and 10.81 Agility Scores (both better than Montgomery’s). With the Rams offense looking solid with Matthew Stafford, the Bears will likely trail too, leading to less carry usage for Montgomery.

The Raiders are starting second year unproven wideouts Henry Ruggs and Bryan Edwards against Ravens starting cornerbacks Marlon Humphrey and Marcus Peters. Both are Pro-Bowlers and both allowed less than 1.75 Fantasy Points Per Target. Along the Baltimore defensive line, we see Pro-Bowlers Calais Campbell and Brandon Williams. RBs Josh Jacobs and Kenyan Drake are solid players by themselves, but Jacobs saw a 36.62 (No. 48) Run Blocking Efficiency last season. The offensive line just lost Rodney Hudson, Gabe Jackson, and Trent Brown, so that efficiency does not look to improve against Campbell and Williams. QB Derek Carr should be able to rack up yards, but you aren’t starting him in 1QB leagues against a stout defense with a worse o-line this season. Outside of star TE Darren Waller, no other Raiders look to fare well week 1. 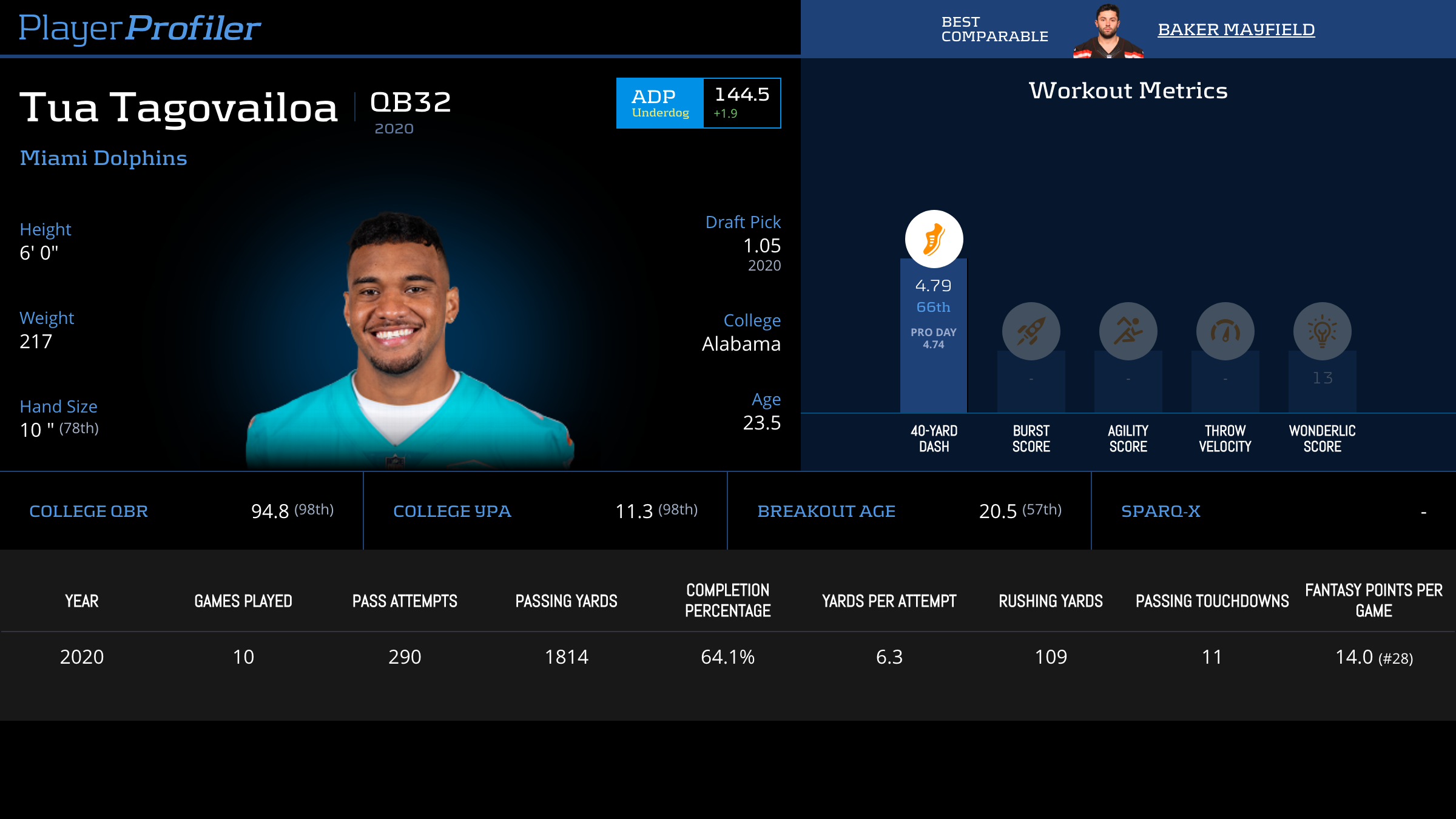 As accurate as Tua Tagovailoa was last season – 7.89 (No.1) Accuracy Rating – he did not put up big fantasy numbers, with 14.05 (No. 28) Fantasy Points Per Game. He also does not have the suspended Will Fuller for Week 1.

We're all obsessed with the rookie QBs but the Patriots front 7 is one of the big stories of the preseason for me. Judon, Uche, Barmore, Hightower…..whew baby https://t.co/AKY9Wlnbc4

The Patriots defense is still excellent despite missing Stephon Gilmore. They added edge rusher Matthew Judon in the offseason and still have Josh Uche, Chase Winovich, Dont’a Hightower, and more in the front seven. The secondary has J.C. Jackson as CB1, going up against one of Jaylen Waddle or DeVante Parker. Jackson had 15 (No. 5) pass break-ups last season and will receive safety help from the likes of Devin McCourty and Adrian Phillips. With a formidable secondary and scary defensive front facing the Dolphins’ middling o-line, Tua faces a tough Week 1 task.