When there is so much going on, what should fantasy gamers and sports fans focus on? This is the question I will answer for you in this series of articles entitled, “Lessons Learned.” I try to look beyond the obvious so won’t write, for example, that Christian McCaffrey is good. Having said that, this is Lessons Learned Week 8!

Since he entered the league, Tony Pollard has been a better running back than Ezekiel Elliott.

If not for Elliott’s contract, and Jerry Jones’s unwillingness to admit a mistake, Pollard would be Dallas’s lead back. To Elliott’s dismay, he sat out Week 8 against the run sieve known as the Chicago Bears while Pollard exploded for 131 rushing yards and three scores on just 14 carries. That’s 9.4 Yards per Carry, folks. Elliott has never put up 9.4 Yards per Carry in 99 career regular-season or playoff starts. In the 19 career games, when Pollard has been given 10 or more carries, he averages 5.9 Yards per Carry. Only two backs this year, Khalil Herbert and Travis Etienne, are averaging more. Only Rashaad Penny did better last year. 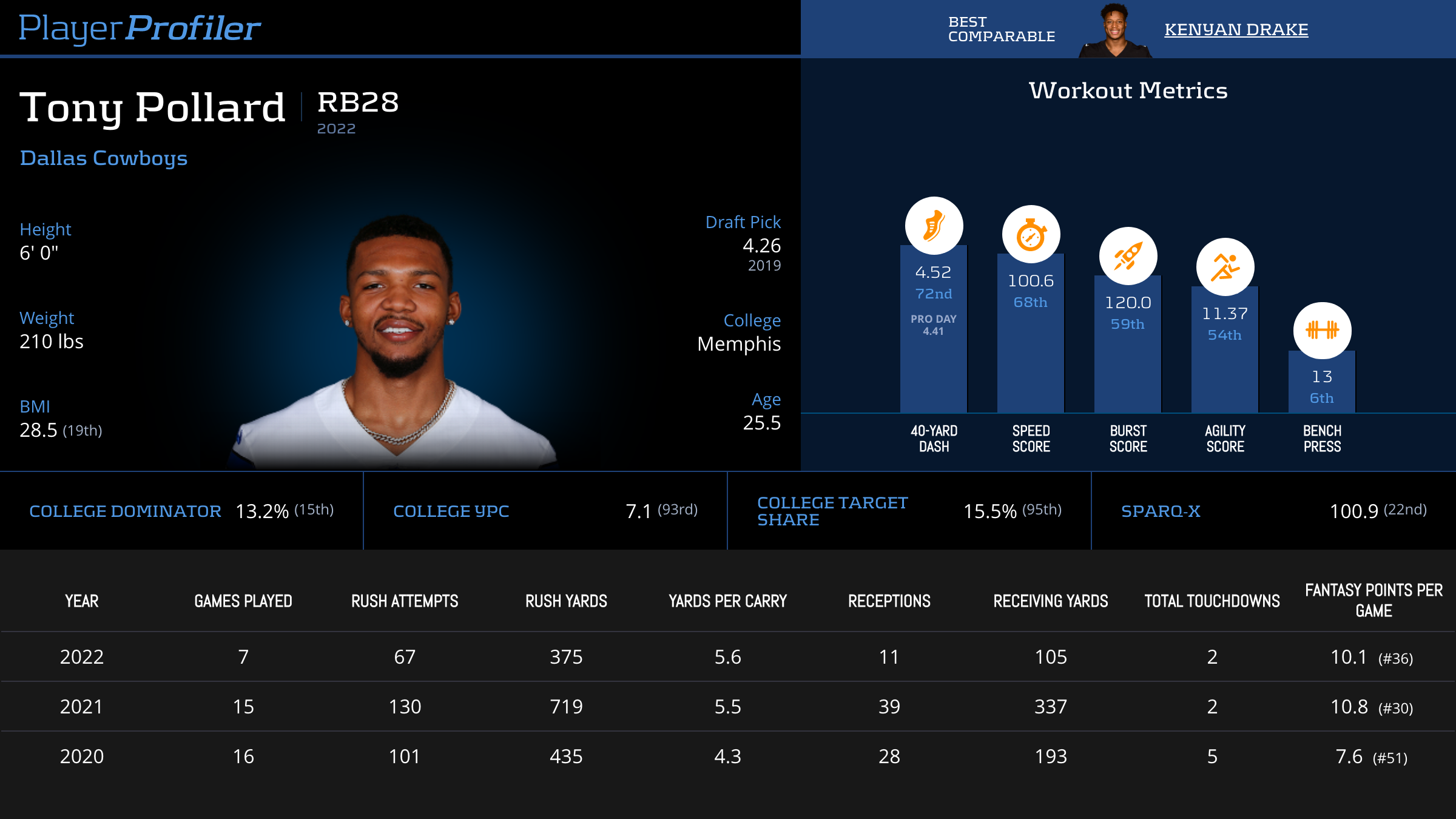 As has been the case for years now, Pollard bests Elliott in virtually every performance and efficiency metric. Pick a metric, any metric. Breakaway Run Rate?  Pollard’s 9.0-percent (No. 10) dwarfs Elliott’s 1.8-percent (No. 47). Yards per Touch?  Compare Pollard’s 6.2 (No. 4) to Elliott’s 4.1 (No. 50). Maybe you favor Yards Created per Touch? Pollard more than doubles Elliott there, too. We could go on, but you get the idea. Other than a solid Red Zone Conversion Rate, there’s been little to explain Elliott’s 62-percent to 43-percent Snap Share advantage.

Action: When Elliott returns to health, performance aside, it’s Elliott’s backfield. It’s a shame, but Pollard dynasty managers need to hang in there. They will eventually cash in that winning Pollard dynasty ticket.

This year’s NFL draft was the first in nine years in which no QB was selected among the top three picks. Over that stretch, 11 of the 13 top-three overall QBs have disappointed if not outright busted.  None of us have Baker Mayfield, Sam Darnold, or Mitchell Trubisky on our rosters even though each was top-three in the last 5 years. We’re not sure about Trevor Lawrence or Zach Wilson either, but initial returns are troubling.

As it stands now, only five of this year’s top-24 fantasy quarterbacks were former top-three picks. Let’s face it, the NFL draft is a bad indicator of fantasy QB greatness. If we can’t rely on the NFL draft, where can we look? Actually, it’s rather easy. We need quarterbacks who can throw just well enough to stay on the field and who can run. The more they can run, the better. Two-thirds of this year’s QB1s in Fantasy Points per Game rank top-12 in QB Rushing Yards per Game.

Looking to the Future

That’s more than the number of Accuracy Rating leaders among fantasy leaders. Let that sink in… for fantasy, it’s better to have a QB that can sometimes make a good throw but can run like crazy than to have a guy who can sit back and fire a ball perfectly into a tight window. It’s how Justin Fields can throw for 151 yards in Week 8 but put up 30 fantasy points. It’s how Lamar Jackson, with one 300-yard passing game this season so far, is the top fantasy QB.

So, let the touts rave about C.J. Stroud, who never runs, and Bryce Young, who rarely runs, is undersized, shorter, and more than 30 pounds lighter than Fields.  Watch their rookie fantasy rankings climb as NFL teams trade up to draft them early. We’ll sit back and let others draft them too high for fantasy. We’ll trade back and look for the next Lamar Jackson, Josh Allen, or Fields. In the next year, there’s a great chance that a running QB like Hendon Hooker outshines them all.

Action:  In rookie drafts, a highly-drafted quarterback is never guaranteed NFL or fantasy success. In fact, history says the odds are against them. The best fantasy quarterbacks run a lot. Make finding rushing skills a 2023 QB requirement.

3) The Vikings are the Least-Inspiring 6-1 Team Ever

The NFC North is a mess. Detroit, despite defensive improvements, still can’t stop anyone. The Bears have a lot of work to do on both sides of the ball. The Packers fell to 3-5 after Sunday night’s loss to the Bills. But sitting quietly over in that other corner of the NFC North is a Minnesota. No one is talking about the Vikings despite having a 6-1 record after edging the Cardinals on Sunday.

This Minnesota team, though, is not 6-1 good. The only team they’ve beaten with a winning record was Miami without Tua Tagovailoa. The Vikings are not running the ball particularly well. They are only No. 25 in Rushing Attempts and No. 21 in Rushing Yards per Pro Football Reference. Their 4.6 Yards per Carry is middle of the pack. Dalvin Cook, with an 8.4-percent (No. 4) Breakaway Run Rate in 2021, is at 3.2-percent (No. 38) this year.

Not Airing it Out

The Vikings are not throwing the ball downfield to their superstar WR Justin Jefferson, either. Jefferson’s Average Depth of Target has dropped from 12.0 in 2021 to 8.4 in 2022. Kirk Cousins‘ 6.5 Air Yards per Attempt is No. 32 amongst quarterbacks,  and his 51.5 QBR is No. 17.  It’s not their defense either, which has given up the No. 4 most passing yards and is bottom-10 in surrendering rushing touchdowns. 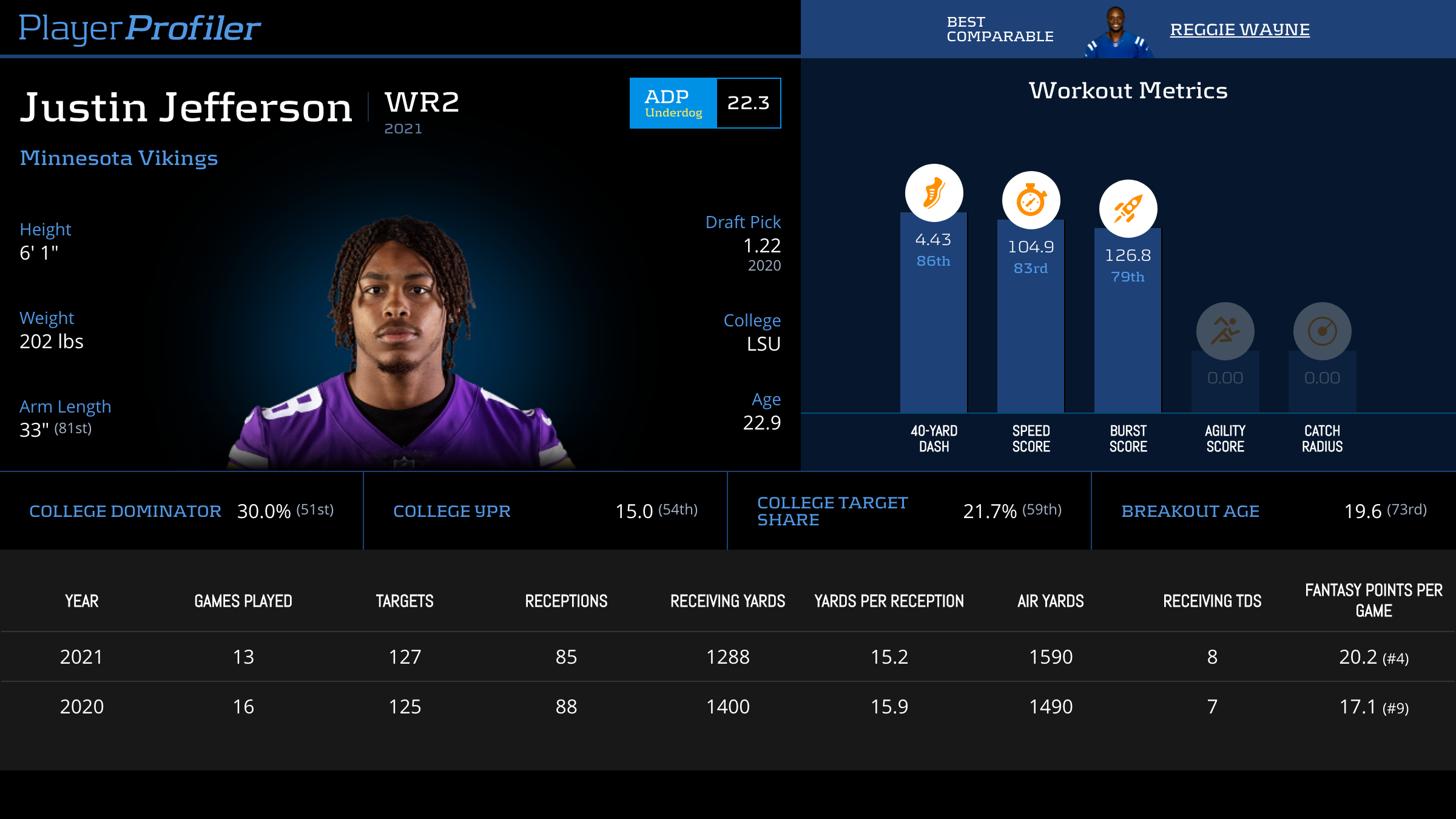 The Vikings are five games over .500 but only +29 in Point Differential. This is a middling team. But in the NFC North, that makes them the best.

Action: Don’t over-pay for Minnesota skill position players this year. In dynasty, be open to moving anyone not named Justin Jefferson. Dalvin Cook‘s dynasty value will never be higher. Kirk Cousins is just outside the QB1 range in Fantasy Points per Gam,e but he’ll be 35 before next year.

4) Travis Etienne is the Jacksonville Offense

Travis Etienne put up 156 yards on 24 carries Sunday. He averaged 6.5 Yards per Carry against a good Denver run defense. Etienne posted more yards running the ball than Trevor Lawrence could muster throwing 31 times.  While early returns show Lawrence to be a middling-at-best NFL quarterback, Etienne is showing the exciting skill set he projected as an NFL first-round pick out of Clemson.

After a modest start to the year, Etienne has averaged over 100 yards rushing at a stunning 7.4 Yards per Carry over his last four games. Etienne is Jacksonville’s star. The team admitted as much by shipping James Robinson off to New York.

Action:  Etienne is the only Jacksonville skill position player to be interested in. If league-mates still value the name Trevor Lawrence or any Jacksonville WR in redraft or dynasty, strike now.

D.J. Moore has been the Carolina Panthers’ top WR ever since he set foot on an NFL field. Entering the 2022 season, Moore ranked in the top 10 in receiving yards and eclipsed 1,150 yards receiving in each of those previous three seasons. This more than validated his 2022 WR15 ADP. But after just four games of being exposed to Baker Mayfield, folks began panicking on Moore. They benched Mayfield. Then, P.J. Walker took over as if that could have possibly made things worse. Well, just as we’d given up hope, our hero returned to his former ways, posting a combined 13 catches, 221 yards, and two scores over the past two weeks. If he’d only kept his helmet on after that late touchdown Sunday, his Panthers would be tied for first place in the NFC South. 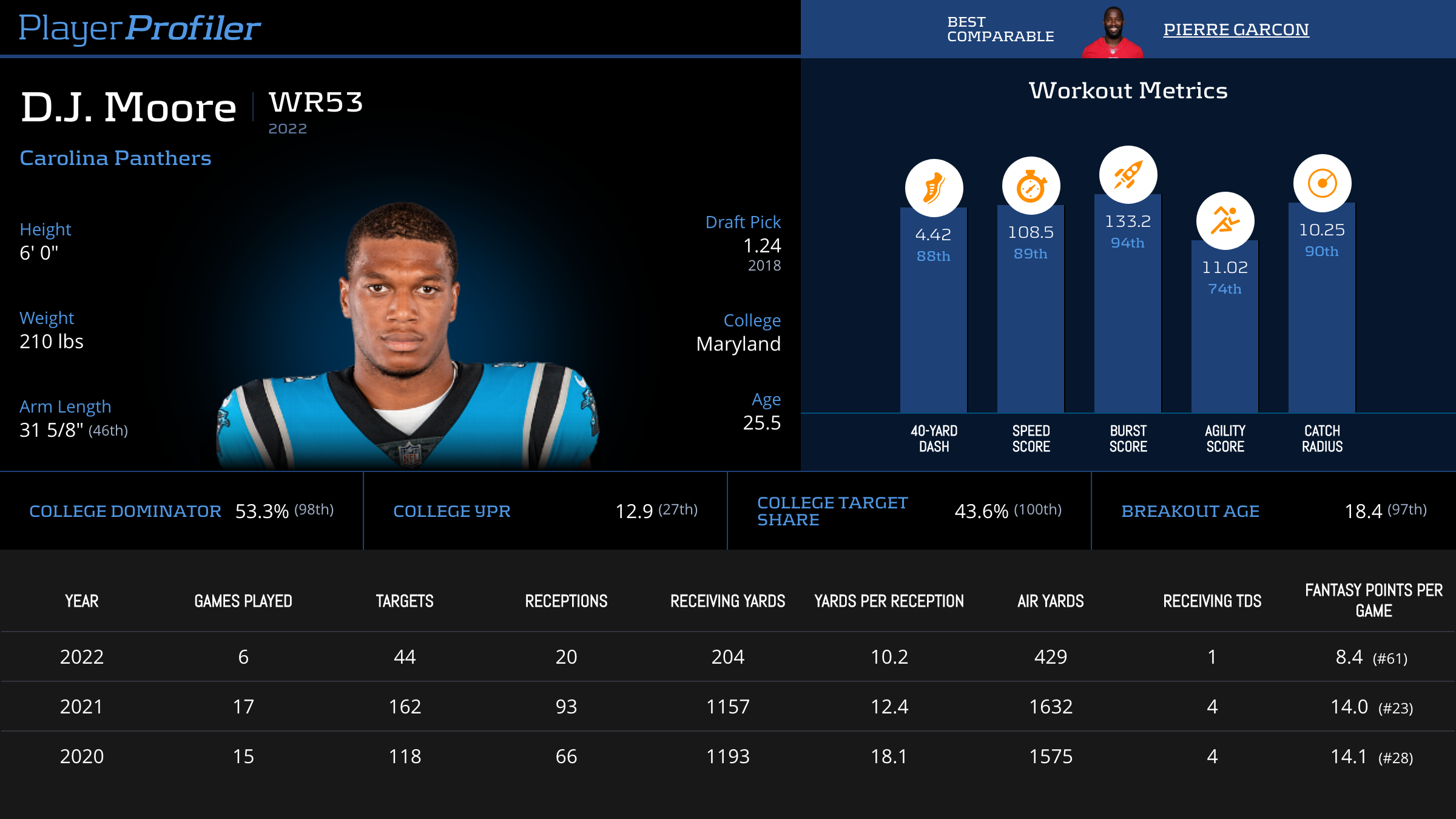 Kyle Pitts put up 12 touchdowns as a 19-year-old in the SEC and became the highest-drafted tight end in NFL history. After putting up 1,026 yards in his rookie season, he was quiet through Week 7 with only two TE1 weeks. Some folks decided that was all they needed to see and started jumping off the Pitts ship. However, barring an injury, a modest five-week stretch doesn’t mean a proven 21-year-old has suddenly lost his talent. We drafted Pitts early and have stuck with him every week. He has the upside we won’t get from any other TE outside the top two or three.

Action:  Always play your best players. Even after a few quiet weeks, talent is talent and will eventually win out. Don’t overthink it. Playing your most talented players is consistently your best chance to win.