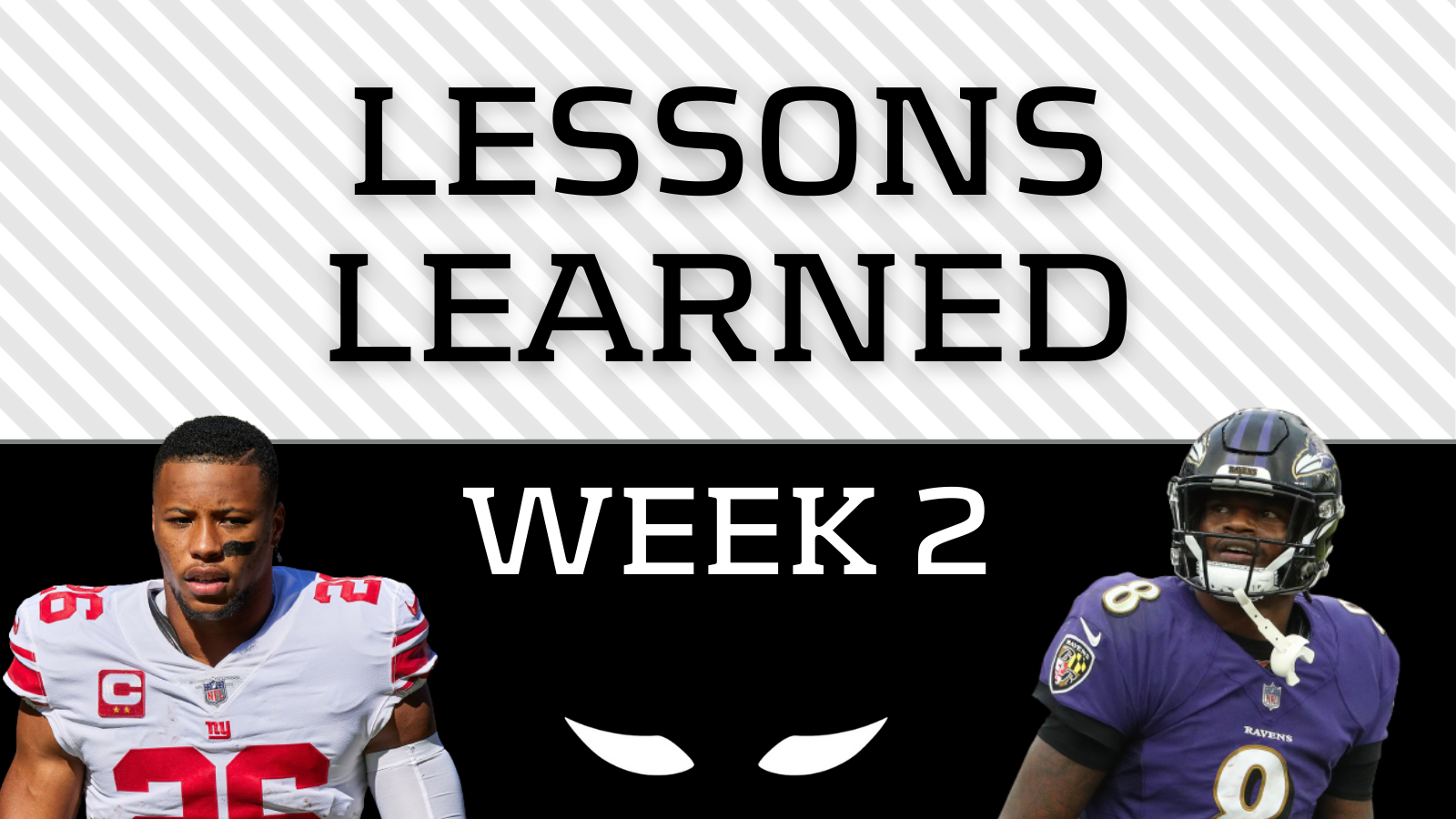 Back in the Giants’ Week 1 loss to Denver, Saquon Barkley played 48-percent of their offensive snaps and received 11 touches. In Week 2’s Thursday tilt, he played 58 of 69 snaps (84-percent) and handled 80-percent of their RB touches. No other Giants RB played more than 14-percent of the snaps or got more than three touches.

So much for easing Barkley into the season.

So Saquon is back to full bell cow status and we can cash in on the fantasy points that go with it, right? Well, being “the man” is great, but not quite as great behind, according to Pro Football Focus, the worst offensive line in the league.

This week, despite the G-Men putting up 29 points on the Football Team and leading much of the game, Barkley was not a difference-maker. Of his 13 carries for 57 yards, 41 came on a single carry.

Saquon can light up the highlight reel when given a hole. In 33 career games, he’s had 25 rushes of 20-plus yards and 11 of 40-plus. He needs those holes, though, because he doesn’t create a lot on his own. He broke one rushing tackle this week. In more than one third of his career games, he’s put up zero broken rushing tackles. In two thirds of them, he’s had at most one.

So, give him some holes and he’ll excite. Give him a bad o-line and a terrible rushing schedule, like he faces in 2021, and he’ll have an uphill battle this year.

Saquon Barkley is still finding his way, but playing a lot.

Handled 73% of long-down-distance situations and 100% of the two-minute offense.

He is an every-down back. Now he just needs the touches.#NYGvsWAS

Action: If you own Barkley, field offers. If you don’t own him, don’t look to add him because the price will be too high. He appears healthy and has significant name cachet. He’ll have have some highlight runs but, with that offensive line, not as many as his price would mandate.

Heading into 2021, Derek Carr was one of the latest of the late round quarterbacks with a consensus ADP well into mid-20s.

Yet, in Week 2, Carr led the Raiders to a road win in Pittsburgh, putting up 382 yards and 2 TDs against the vaunted Steeler defense, the same that had completely shut down Josh Allen and Buffalo’s top-5 passing offense in Week 1. Add this to a stunning Week 1 Raiders upset win in Baltimore, in which Carr put up 435 passing yards and 2 TDs, and you’ll surprisingly find him at the top of the NFL passing leaderboard with 817 passing yards, 4 TDs and 1 INT in two rough road games.

What is going on here?

Well, give credit where credit is due and, so far in 2021, that credit must go to Carr and head coach Jon Gruden. In Week 1, after Carr sent seven of his 10 first-quarter attempts Darren Waller‘s way, the Washington Football Team didn’t force him to look elsewhere, so he kept taking what was given, sending it to Waller another dozen times in the last three quarters. If it ain’t broke, don’t fix it!

When Pittsburgh made a point to take Waller away in week 2, Carr looked to young star Bryan Edwards, newcomer receiving back Kenyan Drake, and took a few deep shots to Henry Ruggs. Carr and Gruden adjusted and won again.

Action: It may be too late to get on board with Carr and the top components of the Raiders’ receiving corps. But, if any pieces of that group is still available, even a Hunter Renfrow or Henry Ruggs if another owner has tired of him, it’s worth getting a piece of this pie to see how it plays out. And, if someone has enough depth at QB, consider making an offer for Carr or, if that owner is sold on him this year, see what other QBs you might be able to acquire off his/her roster.

derek carr has the seventh most passing yards through two weeks in NFL history. normal season.

The Ravens, led of course by Lamar Jackson, have been top 3 in rushing attempts, yards and TDs the last three years. Even before Jackson came on board, though, and with Joe Flacco at the helm, they were still top 10 in all three categories.

Heading into 2021, after losing last year’s leading running back J.K. Dobbins and his backup, Gus Edwards, plus discarding 2020 No. 3 RB Mark Ingram, Baltimore just keeps running successfully. In Week 1, rookie Ty’Son Williams took 9 carries for 72 yards and a score. Combined with 86 yards from Jackson, Baltimore put up 189 rushing yards on the Raiders. In Week 2, the Ravens have put up over 240 yards at almost a 7.0 Yards per Carry clip – and three scores.

As always, they are being led by Jackson, but Williams and the other Raven RBs have put up over 140 yards as well.

In San Francisco, despite juggling multiple starting backs most seasons, Kyle Shanahan’s 49ers have consistently finished top 10 in rushing touchdowns and top half of both rushing attempts and yardage. Before joining San Fran, in his last year as Atlanta’s offensive coordinator, Shanahan’s Falcons were top 5 in both rushing yards and scores.

This year, when the 49ers lost Raheem Mostert and Jeff Wilson in the offseason, they leaned on sixth-round rookie Elijah Mitchell, who responded by posting 105 rushing yards in his first-ever NFL game in Detroit. In Week 2, facing one of the NFL’s tougher run defenses in Philadelphia, the 49ers held off the Eagles, running for more than 100 yards despite in-game injuries to their top three backs in Mitchell, Trey Sermon and JaMycal Hasty.

Action: If you’re desperate for RB help, scour both of these teams’ rosters to stuff the end of your bench. If you have room, even guys like Latavius Murray, Devonta Freeman or Trenton Cannon are free and worth a spot as your last guy. Keep an eye on their depth charts and injury reports and watch out for any players these teams might pick up. Even the last guy on these teams can turn into a big win for your roster.

In 2019, after whiffing on Dwayne Haskins in the first round, Washington added LB Montez Sweat and superstar WR Terry McLaurin. In 2020, they added Pro Bowl defensive end Chase Young and running back Antonio Gibson.

In 2020, per Pro Football Reference, the Football Team had an outstanding defense – No. 2 in Net Passing Yards per Attempt and tied for No. 2 in Net Yards Per Attempt. They were No. 6 in sacks with 47 despite only blitzing at a middling 32.4-percent rate. This team looked poised to take the next big step to competing for an NFC title so, this offseason, they bolstered their team with veteran talent, adding Ryan Fitzpatrick, Curtis Samuel and CB William Jackson III.

After losing Week 1 to the Los Angeles Chargers in Washington, the Football Team squeaked by the New York Giants 30-29 in Week 2. Their dominant defense has now given up 815 yards in two games at home. They gave up a 102 passer rating and 95 yards rushing to Daniel Jones, who finished 2020 with the 30th-ranked Passer Rating per Pro Football Reference. Washington hasn’t yet shown their trademark persistent defensive pressure.

Offensively, they lost Fitzpatrick in Week 1 and, while Taylor Heinicke filled in admirably in Week 2, it was not in the Football Team’s plans to rely on a QB with one career start in his first three years. Without Fitzpatrick or Samuel, they need to lean more on McLaurin and Gibson. While they fed McLaurin in Week 2, they should be giving Gibson more than 16 carries and 3.5 targets a game, especially against middling defenses like they faced in Weeks 1 and 2.

Action: After two unexciting performances by the Football Team, Washington is now 1-1 and in the bottom half of the league in most defensive metrics early in the season. Facing a tough Week 3 road game in Buffalo, wait until afterwards to see what the cost is on Washington players and, in particular, Antonio Gibson. His price may never be lower than if they stumble this week. With basically the same defensive unit that dominated in 2020, if you play in DST leagues, after the Week 3 game, they might be available, too. Just be cautious, though, of a really tough DST schedule, including games with Kansas City and Tampa Bay and two matchups against Dallas during fantasy playoff Weeks 14 and 16.