Has there been a player, heading into a fantasy football draft, where summoning the will to hit the draft button takes everything out of you? Any time he’s there for you to draft, you shrug and ignore him because you don’t really want him? I’ve felt that way about a myriad of players but especially so regarding Amari Cooper. Yes, he’s a talented player with numerous finishes inside the top 20 at his position, but I can’t ever get behind pulling the trigger on Cooper in drafts especially this season. There are a number of reasons for this, and we will discuss them in this article.

It seems harsh to penalize Amari Cooper for being inconsistent with his scoring output when the nature of the position causes different weekly results. You could even argue that consistency (or lack thereof) is overrated and difficult to predict. Fair enough. It makes sense too. Don’t we want players who have the capability to backpack our fantasy teams to wins by themselves with monster 30+ point performances? 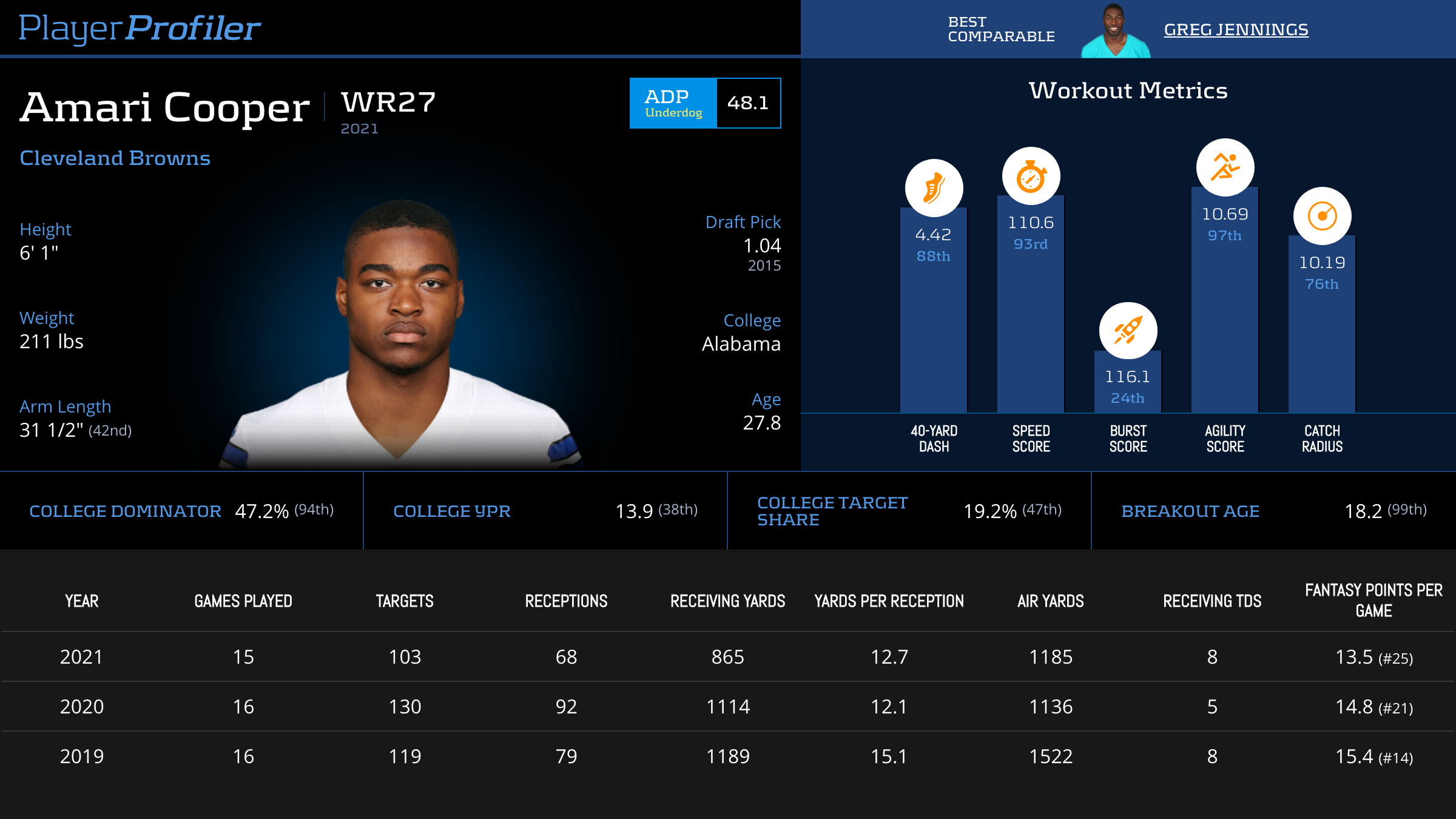 Cooper has very much fit that archetype. In Cooper’s seven-year career, he has nine performances with at least 25 points in half-PPR scoring. Half-PPR is the format I use in my redraft leagues, and I decided to use that for this purpose because it is harder to get the boom weeks. A fair baseline number to use with this format is 10 points. Corey Davis‘ 9.8 points per game in half-PPR scoring last year finished No. 36 among wide receivers. It seems fair that we should be able to expect a receiver that gets drafted in the middle rounds to hit that mark fairly routinely.

Cooper hasn’t been able to do that over his career. In his 108 regular-season game career, Cooper has cracked 10 half PPR points 56 times which is good for roughly 52-percent of his games. Perhaps that may be worth it considering Cooper’s weekly ceiling, but I’m not so sure. To Cooper’s credit, he was consistent from 2019 to 2020 once he got settled in Dallas after being acquired by the Cowboys midseason in 2018. From 2019 to 2020, Cooper registered at least 10 half PPR points 22 times in 32 chances (68.75-percent). That’s great, right?

The problem is that’s been more of an anomaly than the norm for Cooper. In Cooper’s five other seasons, he finished with at least 10 half PPR points in 34 of his 76 games. That’s good for just 44.7-percent of his games. Why is this? Those Raider teams early in his career weren’t always successful. Cooper hasn’t fared well against upper-echelon corners for most of his career either, and this factors into his inconsistent nature. Cooper has proven he can be effective, but that will be a much tougher ask this season now that he is in Cleveland.

It doesn’t take a rocket scientist to prove that Dak Prescott is a much better quarterback than Jacoby Brissett. I say Brissett because it is likely that Deshaun Watson will get suspended for at minimum most, if not all, of the upcoming 2022 season. The biggest difference between Prescott and Brissett is Prescott’s ability and willingness to push the ball downfield. Prescott finished last year as the No. 10 in yards per attempt (7.5) amongst quarterbacks, No. 8 in adjusted yards per attempt (7.6), and No. 13 in air yards per attempt (8.1) according to PlayerProfiler.com. 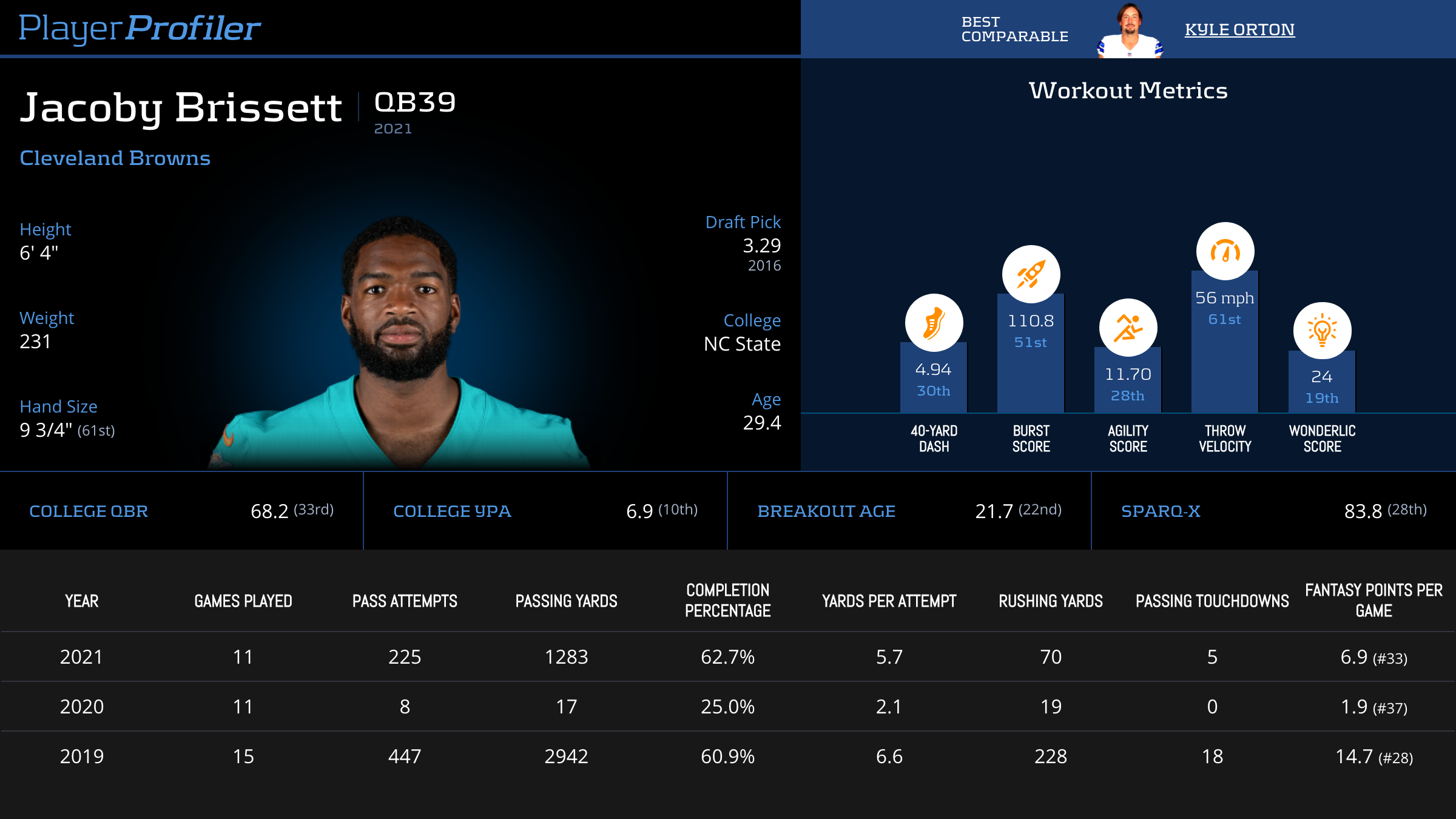 Brissett is a fine quarterback and about as well as Cleveland could do given the circumstances, but he is far from a world-beater. That’s shown up in the fantasy sphere with his ability to prop up star receivers. Brissett’s had three stints starting multiple games in a season. He played in 2017 and 2019 with the Indianapolis Colts and 2021 with the Miami Dolphins. Let’s just say the number one receivers for those teams at the time (T.Y. Hilton and Jaylen Waddle) were not the best fantasy versions of themselves with Brissett at the helm.

If you exclude the games where either Brissett or Hilton failed to play at least 50-percent of the team’s snaps, those two shared the field 23 times over Brissett’s two seasons as a starter. Going back to our 10-point half-PPR threshold, Hilton met that mark only nine times. He averaged 10.2 half-PPR points per game in those games. Granted, Hilton was battling injuries for most of the 2019 season and was in and out of the lineup as a result. Still, that per game average would’ve been the WR35 in that format last season, just between Terry McLaurin and Christian Kirk. When Hilton got to play with Andrew Luck for one last season in 2018, he averaged 14.36 half-PPR points per game which would’ve been good for the WR6 on a per-game basis.

Waddle didn’t fare much better. Of the six games Brissett and Waddle shared the field together, and played at least 50-percent of the team’s snaps, Waddle exceeded 10 half-PPR points twice. He averaged 7.85 points per game in the format. In contrast, in games where Tua Tagovailoa started or played the majority of the game, Waddle averaged 13.33 points per game. That ranked as the WR12 on a per-game basis in half-PPR scoring.

Adding insult to injury, the nature of the Browns’ offense will make it even harder for Amari Cooper to produce big-time weekly outputs. Ever since Kevin Stefanski was hired as the head coach for Cleveland Browns in 2020, and took over their offense, he has doubled down on establishing the run. Granted, it makes sense when you have Nick Chubb and Kareem Hunt, but that’s not what we want to hear when targeting wide receivers. In 2020, the Browns threw the ball 501 times, which ranked No. 28 in the NFL. They finished No. 28 in pass attempts again in 2021 with 520. There are 32 NFL teams, so that’s not ideal. Meanwhile, Cooper’s Cowboys finished No. 2 in the NFL with 639 pass attempts in 2020 and No. 6 with 647 attempts in 2021.

Dallas posted a 57.8-percent pass rate in 2021 and a 59.8-percent pass rate in 2020. Cleveland’s pass rate sat at 50.3-percent in 2020 and 51.7-percent in 2021. Cleveland has a clear run-first philosophy that will only be more pronounced without Watson for 2022. Not only does Cleveland run more often, but they also don’t call as many plays in general as Cooper’s former team. Over the last two seasons, Dallas ran 2,189 offensive plays from scrimmage, good for roughly 66 plays a game. Cleveland, on the other hand, ran 2,001 plays and about 61 plays a game. Fewer plays and a higher emphasis on running the ball on said plays don’t bode well for a wide receiver’s fantasy output.

Cooper is a very good wide receiver. He has finished as a top 20 receiver more often than not. However, I don’t see a path for him to reach that mark again in 2022. Considering his previous inconsistent nature, the huge downgrade at quarterback, and the transition to a slower, run-oriented offense, what exactly does Cooper have going for him? He is the number one receiver on the team and should walk into a 20-25+-percent target share, but that’s about it. His ADP on Underdog has dipped from a late fifth-round pick to a mid-sixth-round pick as the No. 31 receiver off the board. That’s a better price, but there are still other options going later than Cooper that I’d prefer including Elijah Moore, Garrett Wilson, Adam Thielen, Drake London, and Russell Gage, among others. Once again, I will be out on Cooper and am willing to be proven wrong.