Eagle-eyed regular visitors to PlayerProfiler would have noticed over the last few weeks that our player pages have begun to display a brand new metric. You can’t miss it because it’s in the first efficiency section. It’s called “Formation Adjusted Yards per Route Run.” Sounds exotic, and quite a mouthful, doesn’t it? But what exactly is it? It’s time to Meet the Metric.

The idea of tracking and showcasing this particular metric came from a rare in-person meeting of the PlayerProfiler Brain Trust in Las Vegas. It should surprise no one that the discussion was an argument with Nate Liss on one side valiantly arguing a point against a determined opposition on the other side of the table. But the idea wasn’t born out of a furious exchange of views between Nate and Matt Kelley, Cody Carpentier, Alex Dunlap, and pretty much everyone else on the team (except those of us that reside in the UK and weren’t invited, but those people are not IN THE SLIGHTEST BIT BITTER). Oh no.

For quite some time, the metric of Yards per Route Run (YPRR) has been used as a measure of efficiency especially with regard to wide receivers. This figure looks at how many routes a player runs and divides their total receiving yards by this number. It’s a much better way of judging efficiency than yards per reception. This can be bloated by players running few snaps and picking up chunk gains. But Yards per Route Run this requires deeper context.

Hayden Winks of Underdog Fantasy was one of the first to note the bias towards wide receivers who played in mostly two wide receiver sets against those in three-wide receiver sets. When there are fewer pass-catching options on a field, a player is likely to be able to post greater efficiency numbers when he commands a target. This has led some to track Personnel Adjusted Yards per Route Run, a metric favored by Nate Liss. However, the brains tracking the data for Player Profiler believed that Formation Adjusted Yards per Route Run do a better job of truly telling the tale of the tape.

Working it All Out

The boffins at Player Profiler HQ used data from 2020 and 2021 to chart players’ alignments on the field and the personnel groups they played in to calculate the expected yards per route run for different alignments in each specific personnel package. They found that the expected YPRR for a slot receiver in 11 personnel (one running back, one tight end, and three wide receivers) is 1.696. Lining up outside the numbers in 21 personnel (two backs, a tight end, and two wide receivers) shoots up to 2.66. The hard work did not stop there, of course. Every wide receiver’s routes were checked to calculate individual expected YPRR. This figure would then be subtracted from their actual YPRR to obtain a deviation from the expected figure. This would be added to the league average YPRR baseline to obtain that players’ Formation Adjusted YPRR. 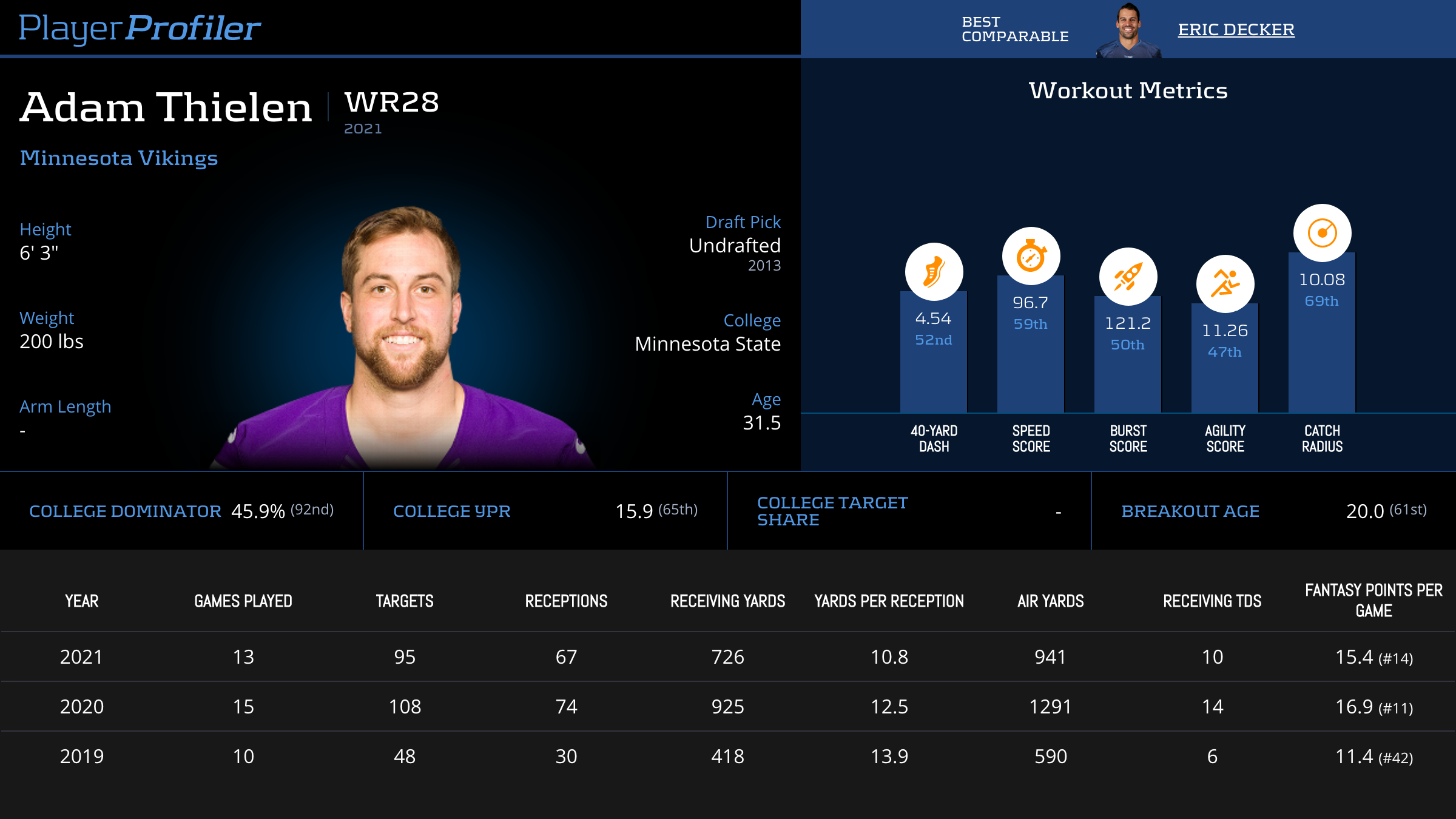 Got all that? Let’s get down to cases to better demonstrate the process, using Minnesota Vikings wide receiver Adam Thielen as an example.

At the top end of the scale, Cooper Kupp led the way with 3.32 YPPR and also with 3.29 Formation-Adjusted YPPR. Deebo Samuel, Davante Adams, Ja’Marr Chase, and A.J. Brown round out the top five in FAYPPR. At the other end, one name stands out for the sheer number of routes he actually ran. Robby Anderson ranked No. 7 among all wide receivers with 567 routes run in 2021. He was WR27 in terms of expected YPRR, but he ended up with just 0.91 which was the No. 9-lowest among qualifying wide receivers. At 0.80, his FAYPPR was No. 93 of 96.

Until we meet again.