Consistency is highly sought after by many in the fantasy football community. Since it’s human nature to avoid risk, we feel more comfortable putting a player in our lineup if we know he’ll reliably score 12-15 points compared to a player ranging from 5-25 points.

But is consistency a trait we can predict from year to year? Follow along as I use the power of statistics to better analyze the relationship between fantasy points and the consistency with which they’re scored.

It may seem like common sense that a lower standard deviation equates to more consistency, which equates to a more desirable fantasy asset. However, this logic misses out on one crucial aspect of fantasy football: we want the players in our lineup to score as many points as possible! Let’s look at an example below.

In 2021, receiver A and receiver B had identical standard deviations of 7.47. Our intuition would tell us that they were equally consistent, right?

Wrong. Receiver A is Cooper Kupp, who lapped the field among receivers this year with 25.9 PPR points per game. Receiver B is Michael Pittman, who was WR24 with 14.0 PPR per game. Just by looking at a simple chart of their weekly scores, it is obvious they weren’t equally consistent for fantasy purposes:

The coefficient of variation (CV) is a metric used to help contextualize the standard deviation of a series of numbers. To calculate it, we take each player’s standard deviation (7.47) and divide it by their average fantasy points. By applying this to Michael Pittman and Cooper Kupp, we can see that Kupp had a CV of 0.29 (7.47/25.9) in 2021 while Pittman had a CV of 0.53 (7.47/14). Notice that while they have equal standard deviations, Kupp is much more stable week to week. Pittman’s CV is 83-percent higher than Kupp’s.

By looking at WR seasons from 2015-2021 with over 100 PPR points, we can get a general idea for cut-offs we can consider “consistent” or “inconsistent.” I found 507 such seasons, roughly 72 per year. The following histogram shows how common different ranges of CV are amongst the 507 WR seasons. A histogram gives us a clean look at which ranges are more common in a distribution based on the height of each bar. 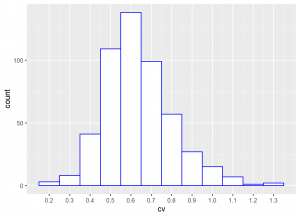 What Does It Mean?

How Predictable is Wide Receiver Consistency?

Now it’s time for the good stuff: let’s see if consistency is a repeatable trait among wide receivers. To do this, we’ll find all the seasons in our sample of 507 where that same receiver’s following season also made it into the sample. In other words, we’ll look at all the pairs of seasons where a receiver scored over 100 PPR points both years.

When we do this, each transition between seasons becomes a data point. Amari Cooper, who has hit the cutoff all seven seasons, accounts for six transitions, while Antonio Brown‘s run from 2015-2018 accounts for three transitions (2015-2016, 2016-2017, 2017-2018). With this method, we’re able to identify 207 relevant transitions across the span of these seven seasons.

Furthermore, we can look at whether CV is a predictable trait for receivers by sorting each “year 1” and “year 2” of every transition as consistent, average, or inconsistent. Then we look at the pairs and what percentage of consistent year 1’s lead to consistent year 2’s, and so on. The results are in the following table:

We can clearly see this is a much stronger relationship than CV. A receiver who falls into the elite bucket has a 79-percent chance of starter or better production the following year! A receiver who can’t break 10 PPR points per game has only a 30-percent chance of breaking into the starter or elite buckets. Most visually satisfying of all, there is a clear pattern across the diagonal of this chart, which indicates the most likely outcome for every receiver is staying in the same bucket as last season.

Putting It All Together

The final piece of this puzzle is uncovering the relationship between PPG and CV. Do wide receivers who score more points also score more consistently? Intuitively, we would expect there to be a relationship since you need to be scoring on a consistent basis in order to rack up a high PPG. Let’s see what happens when we plot the 507 seasons of at least 100 PPR points…

The data clearly shows the relationship between PPG and CV that we expected. We know that a lower CV indicates more consistent scoring, so the strong downward trendline on this chart indicates that higher scoring wide receivers are more consistent fantasy scorers. Therefore, we can assert that a receiver being consistent is not an isolated trait; instead, we should think of consistency as a byproduct of simply scoring points.

We can take this one step further by looking at the effect of PPG in year 1 on CV in year 2. With the stronger year-to-year correlation of PPG and the strong relationship between PPG and CV within the same season, we find that PPG in year 1 is predictive of CV in year 2. If you’re looking for consistency, you’re better off looking at the past year’s points per game, rather than the past year’s consistency!

Mike Williams in 2021 is the perfect player to consider in the context of this analysis. He finished as the WR14 in PPG by averaging 15.4 PPR points per game, but conversations about his outlook in 2022 are centered on his inconsistent production. His six games with more than 20 PPR points and seven games with fewer than 10 PPR points are worrying many drafters, yet his CV only checked in at 0.687, on the slightly inconsistent end of our “average” bucket. History would suggest that Williams’ CV will improve and he is likely to stay productive in fantasy. Then bake in the context of his contract extension, the fact it will be his second year in the Chargers’ new offensive system, and the development of Justin Herbert, and you’ve got a clear buy for 2022 despite the public’s concerns about his consistency.

This research shows that consistency is much less sticky year-to-year than points per game, and the two are strongly related within the same season. As a result, the past year’s PPG is as good (or better) at predicting the next year’s CV as the previous year’s CV. When you’re on the clock in your redraft leagues this year, don’t let your perceptions about a receiver’s consistency affect your decision.