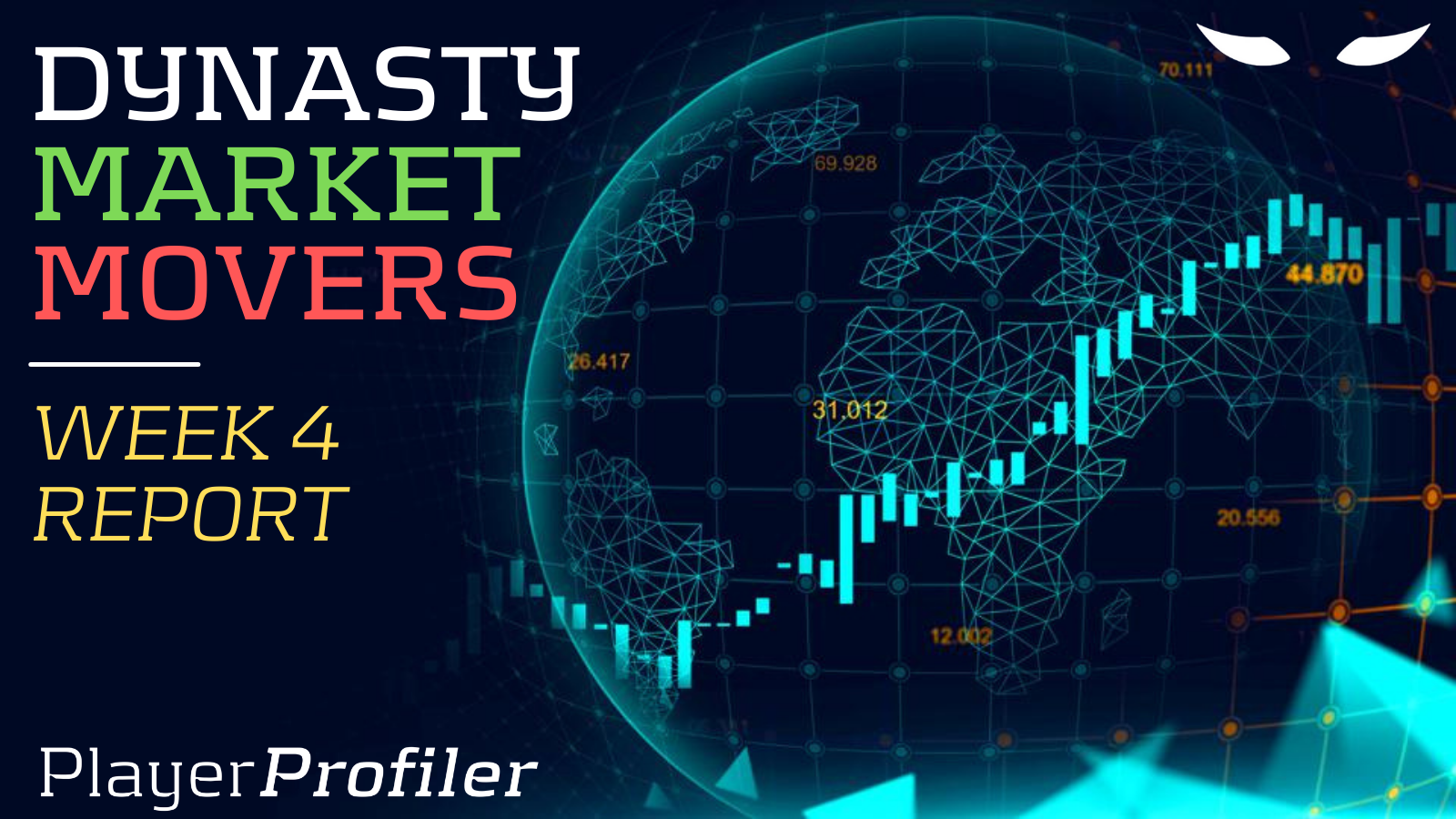 With four entertaining weeks of NFL action in the books, player values continue to rise and fall. In this rapidly changing environment, staying informed on the market trends, and consulting PlayerProfiler’s advanced stats and metrics are keys to making smart dynasty league decisions.

Here’s the fourth instalment of Dynasty Market Movers for 2021!

There’s a new name in the Top 5 of the QB dynasty rankings – Justin Herbert. Over the past two games, the sophomore has been solid. He’s thrown for 503 yards with zero interceptions and seven passing touchdowns. This has produced QB2 and QB12 weekly fantasy football finishes.

On the year, Herbert owns a robust True Passer Rating of 104.4 (No. 11), a True Completion Percentage of 75.8-percent (No. 8), and an Accuracy Rating of 8.0 (No. 4). Sitting atop the AFC West, the Chargers are slinging the rock at the NFL’s fourth highest rate (41.3 Team Pass Plays Per Game). Herbert will look to solidify his QB5 ranking (up two spots) versus a stout Cleveland defense in Week 5.

In college, Kenny Gainwell stood out in a loaded Memphis backfield. A month into the NFL season, it appears to be deja-vu in Philly. The rookie saw a season-high 37.1-percent Snap Share versus the Chiefs in Week 4. Miles Sanders received similar snaps to his 64.1-percent (No. 13) season average. Gainwell is still far from taking over the backfield in terms of playing time, but he’s certainly outperforming in it.

Being above consensus on Sanders over the summer is not looking good 🥶 pic.twitter.com/6MT8l0NVk2

On the season, Gainwell has 19 carries and earned 18 targets, compared to Sanders’ 37 and 14, respectively. While the two are equal in terms of True Yards Per Carry (4.4), Gainwell has been the more efficient back. He leads his teammate in metrics such as Evaded Tackles (7 to 4), Juke Rate (21.9 to 8.3-percent), and Yards Per Touch (6.2 to 5.7). Gainwell accrues 14.29 Lifetime Value points to jump eight spots to RB28. On the other hand, Sanders loses three spots to slip to RB20.

D.J. Moore has taken control of the alpha receiver role in Carolina. Heading into Week 5, he seen a 30.7-percent Target Share (No. 8). Moore’s 43 targets practically doubles the Panthers’ next highest targeted player, which is Robby Anderson with 22. It’s definitely a good time to be holding D.J. Moore stocks in dynasty.

On the year, Moore has 30 receptions (No. 2) for 398 yards (No. 4) and three touchdowns – just one TD shy of his career high. Moore has 155 yards after the catch (No. 3) and is keeping pace with Davante Adams who leads the NFL with 31 catches. Proving he’s elite, the talented Moore ascends into a Top 10 ranking (WR8).

After posting a dreaded fantasy goose-egg in Week 1, Mike Gesicki has been trending up. With Jacoby Brissett starting under center the past two weeks, Gesicki has drawn a team high 18 targets, catching 15 of them for 143 yards and a score. He has delivered TE3 and TE7 fantasy performances during this time.

Ben Roethlisberger has struggled mightily since the first snap of 2021. This shouldn’t come as a surprise, since he wasn’t necessarily sharp to close out 2020. Big Ben leads the league in Danger Plays (20) and Interceptable Passes (18). He’s averaging a weak 6.1 Yards Per Attempt (No. 31) with an awful True Passer Rating of 48.4-percent (No. 30).

The Podfather has seen enough of these two🚀 pic.twitter.com/zgZ5ZXG3l9

Four weeks and three losses into the Steelers’ 2021 campaign, Roethlisberger has yet to post a Top 20 QB fantasy finish. In fact, his best result is a 15.2 point QB23 performance in Week 3. It’s safe to say that his 0.29 Fantasy Points per Dropback (No. 32) isn’t going to get the job done on starting fantasy rosters. The stock of the 39-year-old signal caller continues its decent losing another four spots to QB38.

Ty’Son Williams lost a position leading 20.80 Lifetime Value points to plummet 23 spots to RB68 on PlayerProfiler’s dynasty rankings. The 2020 UDFA has taken a back seat in Baltimore, being designated a healthy scratch in Week 4.

Since Week 1, Williams’ fantasy production has declined with each outing. Despite a consistent 48.2-percent Snap Share, he hit rock bottom in Week 3 with 22 scoreless yards on five carries against the Lions. Perhaps the uninspiring Week 4 production from the veteran trio of Latavius Murray, Le’Veon Bell, and Devonta Freeman get Williams back on the field against the Colts in Week 5.

This is not the start to the season anyone envisioned for Brandon Aiyuk. The 2020 first round pick has 11 targets (No. 87) in four games and is scoring an average of 4.7 fantasy points per game. The metrics aren’t great either.

There appeared to be positive signs after Week 3 when Aiyuk caught four of six targets for 37 yards and a TD. However, it all came crashing back down against Seattle. Playing 68.5-percent of snaps in Week 4, he drew three targets ending the game with a single reception for scoreless 15 yards. Kyle Shanahan noted that the second year wideout is “not there yet”, and unfortunately his stock is trending down.

For fantasy purposes, Robert Tonyan hasn’t made much of an impact through the early part of the season. Paying about half of the snaps over the first two weeks, his Snap Share rose to 74-percent that past two games. In Week 4 versus the Steelers, he nearly matched his target share from the first three weeks with a season-high seven targets. Unfortunately, he was able to only haul in two of them for eight yards.

Tonyan excelled in 2020, ending the season with  52 catches for 586 yards and tying Travis Kelce with 11 TDs (No. 1). In 2021, Tonyan has eight receptions for 74 yards and a TD. He is averaging just 5.4 fantasy points per game (No. 30) which is quite a drop from the 11.0 (No. 6) last year. While Baby Kittle probably won’t reach the heights of last season, there should be better days ahead. For now, he dips five spots and to fall outside the Top 20 TEs on the dynasty rankings (TE21).