League Winners: Who to Acquire Before Midseason 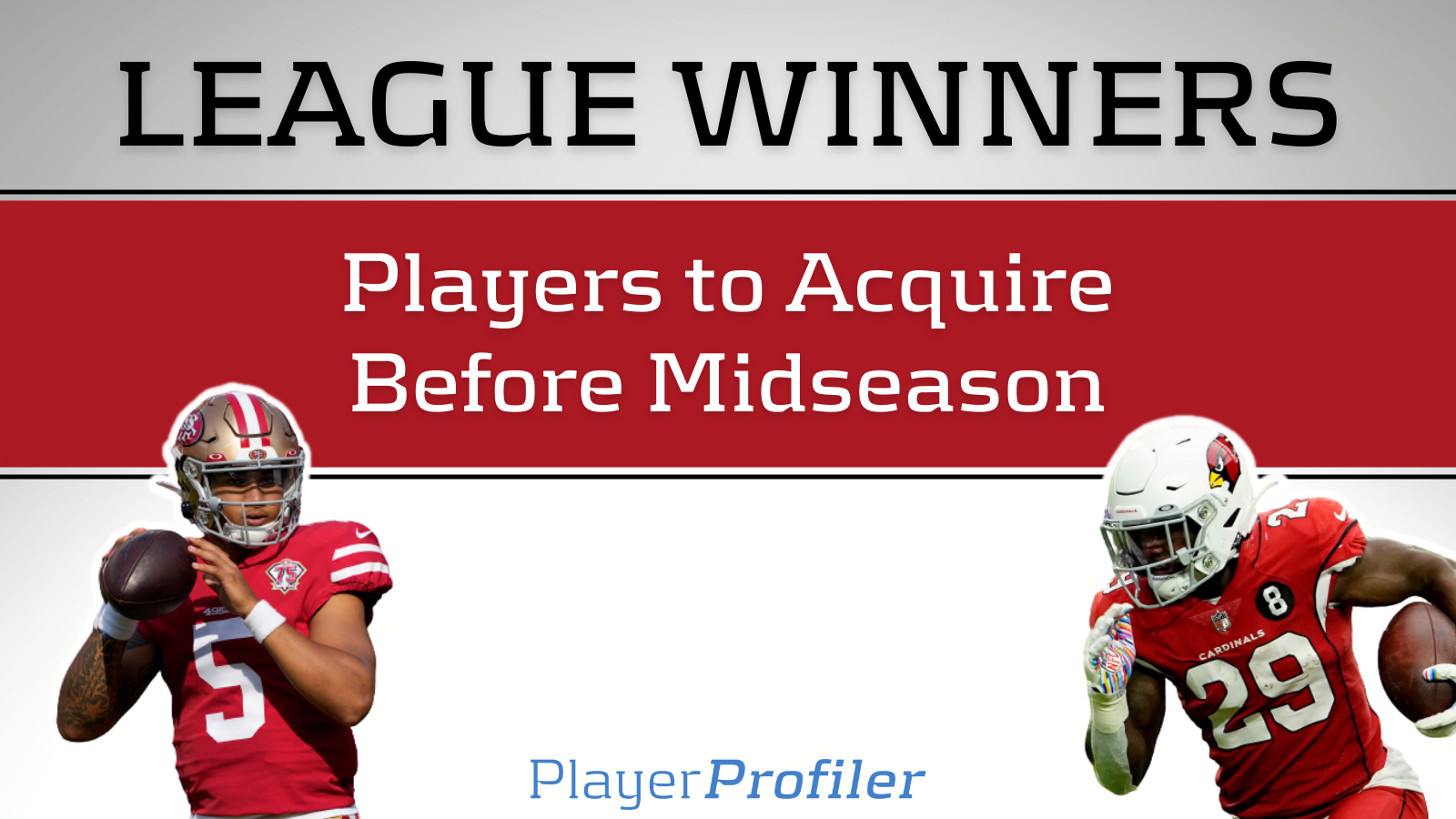 At the waining weeks of the NFL season and leading up to the fantasy football playoffs we all hear about league winners. Well yeah, thanks for telling me about league winners in week 13 when they’re practically unaffordable. This year especially, they’re no handcuffs on waivers to snatch up. The definition of league winner in fantasy has changed. It’s no longer a guy you can pick up on waivers when a star running back goes down, the community has gotten too smart for that. Tony Pollard is rostered, A.J. Dillon is rostered.  This year league winners are affordable trade targets before they’re bonafide studs and here are mine.

Que the Undertaker gongs, because the deadman is here. Trey Lance has arrived. As unfortunate as Jimmy Garoppolo‘s injury is, we may have a Lou Gehrig-Wally Pip situation going on down in San Francisco. It’s looking likely that this Sunday will be Lance’s first career NFL start against the Arizona Cardinals.

In Lance’s spell of Garoppolo, he looked explosive but still raw. He wasn’t accurate and his throwing motion was slow. What he also showed was his rushing and big play ability. We’ve seen what high rushing volume has done to quarterbacks’ value. Think of Jalen Hurts. In one half of football, Lance finished with 157 passing yards and a touchdown along with 7 rushes for 41 rushing yards, good enough for 24.1 points in 6-point TD leagues. Kaboom. His strength of schedule? Ranks No. 9 overall with a playoff schedule of Atlanta, Tennessee, and Houston. Currently sits with a +34.2 Production Premium which ranks No. 1 overall. As long as Lance is starting in San Francisco, he is startable and has league winning upside.

Chase Edmonds has been a PPR darling this season thus far. His 22 targets and 20 catches are both good enough for No. 3 among running backs. Edmonds has also settled into a 60-percent plus snap count for a NUCLEAR offense that will score on anyone, as we’ve witnessed with the Los Angeles Rams.

His issue is about getting into the end zone and in his way is 6-1, 233-pounds of James Conner. Conner has seemed to cement himself as the goal line back and that role is not going away. He far and way passes the eye test, running over fools at the one-yard line with no regard for human life. Outside the near goal line though is fair game. Edmonds saw four receiving touchdowns last season, and with the way the Cardinals are playing, those touchdowns are coming. And when they do, watch out.

If Darrell Henderson plays the rest of the season he will finish as a strong RB1. Henderson currently has everything going for him. 84.9-percent Snap Share (No. 2), 79.7-percent Opportunity Share (No. 5), 62.9-percent Route Participation (No. 5), 4 Breakaway Runs (No. 3), 3 Goal Line Carries (No. 7), all while missing a game with a rib injury.

Henderson has been efficient on a strong Rams offense that will see themselves moving the ball at will. Most importantly, he is DOMINATING playing time. His next string of games include the Giants, Lions, Texans, and Titans. The only tragedy that can ruin this season for Henderson is injury which has been a problem of his in the past. Hopefully this is the season he can put this behind him and eat.

Before the season I was banging the Michael Thomas drum all day long. Projected him to be a target hog on a high volume offense commanded by Jameis Winston. Four weeks into the season, there is still no Thomas and the Saints are nowhere what I thought they’d be. Sean Peyton has turned them into a ground and pound team that relies on defense. Winston has attempted 86 passes (No. 30), 10 Deep Ball Attempts (No. 27), and has 653 Air Yards (No. 30). Yuck. What’s changing?

Thomas is expected to return Week 7. I expect him to completely open up this offense and finally give the Saints another dimension they so desperately need. Do I expect them to be high flying through the air? No, but they will increase their passing volume significantly. Finally Winston can get the ball go to a weapon in the passing game. We fell in love with Marquez Callaway in the preseason, myself included, but Callaway went undrafted and it was unfair to expect him to breakout so easily. Deonte Harris has juice in the open field but he’s also went undrafted. Thomas is a stud and has been the moment he stepped into the league. Once he’s back he will lead the league in target share and be a PPR superstar again. Go get Thomas before your league mates remember who he is.

The Kyle Pitts breakout has not gone according to his hype train of lunatics suggested, thus far. Pitts’ expectation was to be the best rookie tight end of all-time. A little unfair, but according to everything we heard about this man, possible?

As historically bad as tight ends have been their rookie year, it may not be enough to derail Pitts’ breakout. I’m not saying that he will be bad, in fact he has every indication of the opposite. 98th-percentile speed score, 79th-percentile burst score, 85th-percentile catch radius. His raw talent is unquestioned but that’s not what will make him productive this season. He has 135 Routes Run (No. 3), 26 Targets (No. 6), 219 Air Yards (No. 6), 6 Red Zone Targets (No. 2). The Falcons are using him and its only a matter of time before his production matches what his metrics suggest. Go get him from the disappointed owner who drafted him.