The penultimate week of the fantasy football season is in the books. Dynasty Market Movers is here to uncover key risers and fallers on PlayerProfiler’s dynasty rankings. Congratulations to those managers who were able to survive a challenging Week 16 slate. It’s time to bring home those championships!

Have yourself a day, Joe Burrow! The Bengals quarterback balled out last Sunday completing 80.4-percent of pass attempts for a colossal 525 yards and four touchdowns. His big day set a new franchise record and placed Burrow at fourth on the NFL’s all-time list of single game passing yard performances.

In 15 games, Burrow has thrown for 4,165 (No. 6 among qualified quarterbacks) yards and 30 (No. 7) TDs. He enjoys a league-best 9.70 Supporting Cast Efficiency rating, which has translated to a 19.5 (No. 1) Production Premium. Trending up, his stock gains a position leading 7.8 Lifetime Value points this week. Since early in the 2021 season, Burrow has gained over 40 Lifetime Value points ascending from QB11 to QB7.

In his second game back from injured reserve, Michael Carter ran the ball 16 times (four red zone) and caught two of three targets for 124 total yards. His Snap Share rose to 74.1-percent,  up by nearly 20-percent from the previous week.

When a QB throws for 500-plus passing yards someone has to benefit – in Week 16 that was Tee Higgins. The 22-year-old former Clemson Tiger, torched the Ravens hauling in 12 of 13 targets for 194 yards and two touchdowns. He finished semi-finals week as the WR1 with 43.4 fantasy points.

A fourth round selection in the 2020 NFL draft (No. 128 overall), Gabriel Davis has been productive of late. Prior to sitting out Week 16 on the Reserve/Covid-19 list, Davis delivered fantasy gamers a career high 25.5 fantasy points (WR4) in Week 15 versus the Panthers.

With Emmanuel Sanders injured, Davis saw 84-percent of snaps in Week 14, following this up with 88.5-percent in Week 15. In this two game span, Davis earned 15 total targets (five red zone), scoring three times. With 1.96 (No. 14) Target Separation, the sophomore receiver gets open, especially in the end zone. Trending up, Davis accrues 9.74 Lifetime Value points and jumps seven spots to WR41 in dynasty.

Since Week 10, Russell Wilson has produced a QB1 fantasy performance just twice (QB9 in Weeks 12 and 14). Over this seven game stretch, Wilson has averaged 13.8 Fantasy Points Per Game, scoring over 20 points only once (Week 14).

It’s not a surprise that Wilson’s metrics are down from recent years. For example, his passing touchdown rate has dropped to 5.2-percent with a 47.6 (No. 19) Total QBR. This season, the veteran has rushed for a mere 154 yards (12.8 per game), as compared to 32.1 per game in 2020. Wilson loses 4.22 Lifetime Value points and slips to QB9 on PlayerProfiler’s dynasty rankings.

Myles Gaskin has taken a back seat in the Miami Dolphins most recent running back committee. In the last two contests, he’s played about one-third of snaps and has 13 total carries. The end result for fantasy: scores of 5.4 (RB45) and 2.6 (RB63) points.

After a solid stretch in the first half of the season, Chuba Hubbard‘s momentum has hit a wall. Since Week 9, Hubbard has failed to produced more than 41 rushing yards in a single game reaching the end zone just twice. The rookie loses 8.11 Lifetime Value points and three spots to fall to RB37 in the latest rankings update. 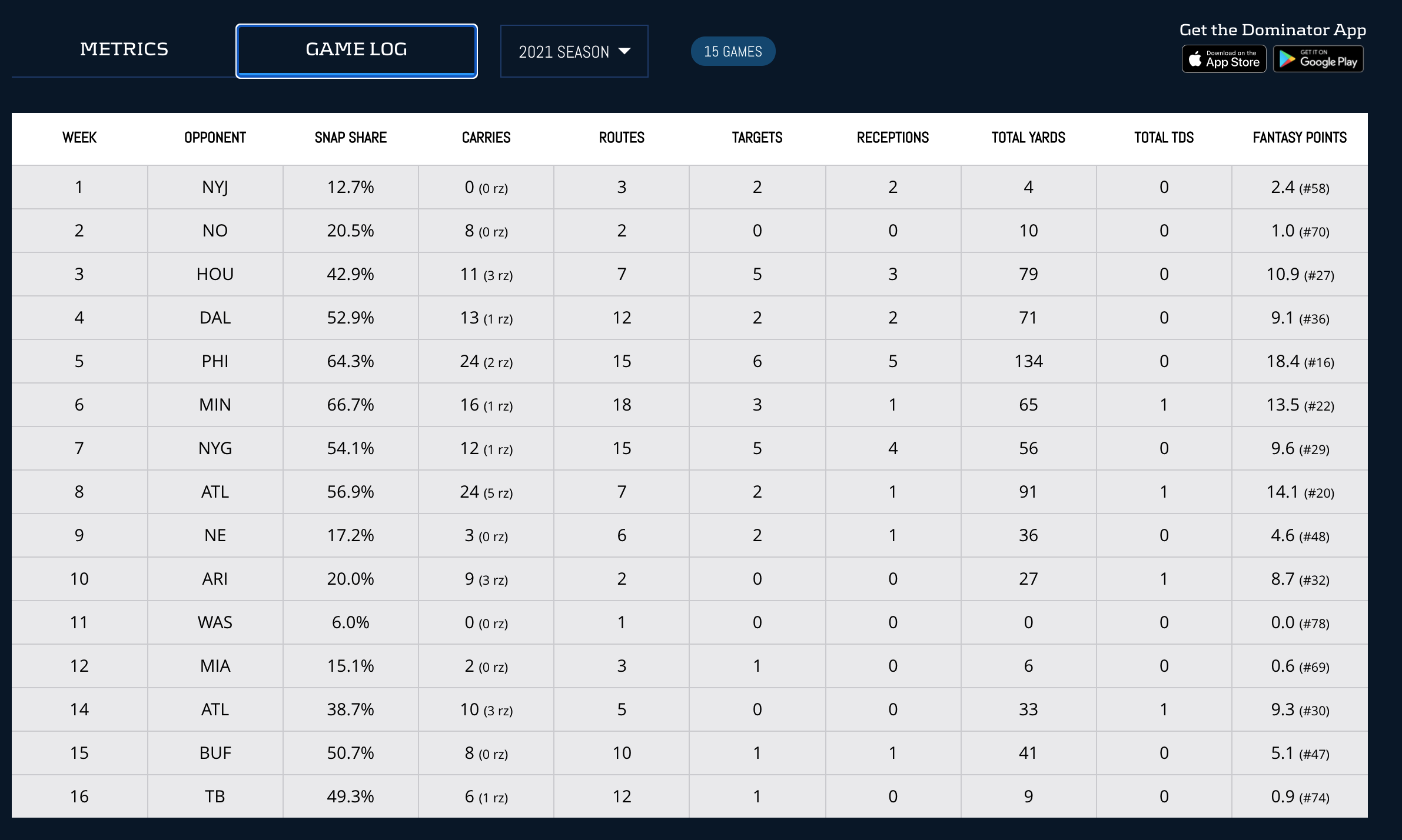 Despite Christian McCaffrey‘s absence, Hubbard has finished as RB30 or worse in the last three games. His production has trended down each game with Ameer Abdullah in the mix and the Panthers offense sputtering. Better days are likely ahead for the rookie RB, however he’s tough to trust in 2021.

D.J. Moore is good at football, but the individuals tasked to deliver him the pigskin have struggled mightily. For those requiring evidence, how about a 4.63 (No. 83) Target Quality Rating and a 69.4-percent (No. 88) Catchable Target Rate. The outcome, Moore has not been able to muster better than a WR20 finish since Week 4.

Despite the mediocre QB play and Panther’s struggling offense, this talent wideout has still managed to deliver fantasy managers a useable 14.3 (No. 24) Fantasy Points Per Game. Imagine Moore’s outlook with a more competent signal caller in Carolina. Producing as a WR2, Moore still loses 9.03 Lifetime Value points and two spots to slip to WR13. Offseason changes are around the corner, fingers crossed for Moore.