The Terry McLaurin contrarian play narrative continues after an underwhelming 7 fantasy point performance last week in a blow out against the Cowboys. McLaurin has still seen at least 65 Air Yards the past four games despite averaging 4.8 fantasy points per game during this time span. Something has to give. Perhaps it does  or perhaps it doesn’t this week against the Eagles.

I'm sitting him in the fantasy championship

However, I am starting Antonio Gibson vs PHI (bottom third run D according to @fboutsiders)

Vs DAL in Week 16 the pic.twitter.com/yW6PuSq1nf

D.J. Moore has seen double digits targets the past four weeks and is averaging 113 Air Yards during this same time period. He has also scored double digit fantasy points the past four games. Somehow he is priced at only $5,600. Fantasy football doesn’t have to be hard. He is buy low and should be rostered in all formats.

I would start in Week 17 is DJ Moore, currently my WR15 in weekly projections

Strong usage even without any TDs in this stretch

Allen Robinson last played in week 14 amassing 71 Air Yards on six targets but only scoring 3.4 fantasy points. He actually out targeted and saw more Air Yards than teammate, and fellow Air Yards Value play, Darnell Mooney. Robinson’s price of $3,800 adequately reflects his fantasy production thus far as he is the WR92 on the season. But, his price does not reflect his nearly identical Air Yards usage on a per game basis with Mooney when both are healthy. Outside of Robinson there aren’t many other high upside dart throws priced below $4,000 this week.

After DeAndre Hopkins‘ season ending injury many expected A.J. Green to seize the plurality  of those vacated targets. However, it has been Christian Kirk (DK: $5,800) who has out paced Green in Air Yards 195 to 117 and targets, 21 to 11. Green is still heavily involved in the Cardinals passing attack running 35 routes the past two games, and is a viable tournament dart throw.

Van Jefferson posted his worst fantasy outing last week scoring only 1.6 fantasy points. However, he still saw 73 Air Yards and six targets. There is no better time for him to be a contrarian play in your lineup than this week. He faces a severely hobbled Ravens secondary and has the potential to explode.

Kenny Golladay is averaging 91.25 Air Yards and seven targets over the past four games. Unfortunately, he has been unable to translate this opportunity into fantasy points averaging only 5.9 fantasy points. He will likely struggle to be fantasy relevant in week 17 however the opportunity he is receiving should at some point led to a big game.

The Robby Anderson renaissance continued into week 16. Since Joe Brady’s dismissal Anderson has seen over 100 Air Yards in two of three games and at least eight targets in each contest. He continues to be priced closer to his floor than his ceiling and makes for a great play in all formats. 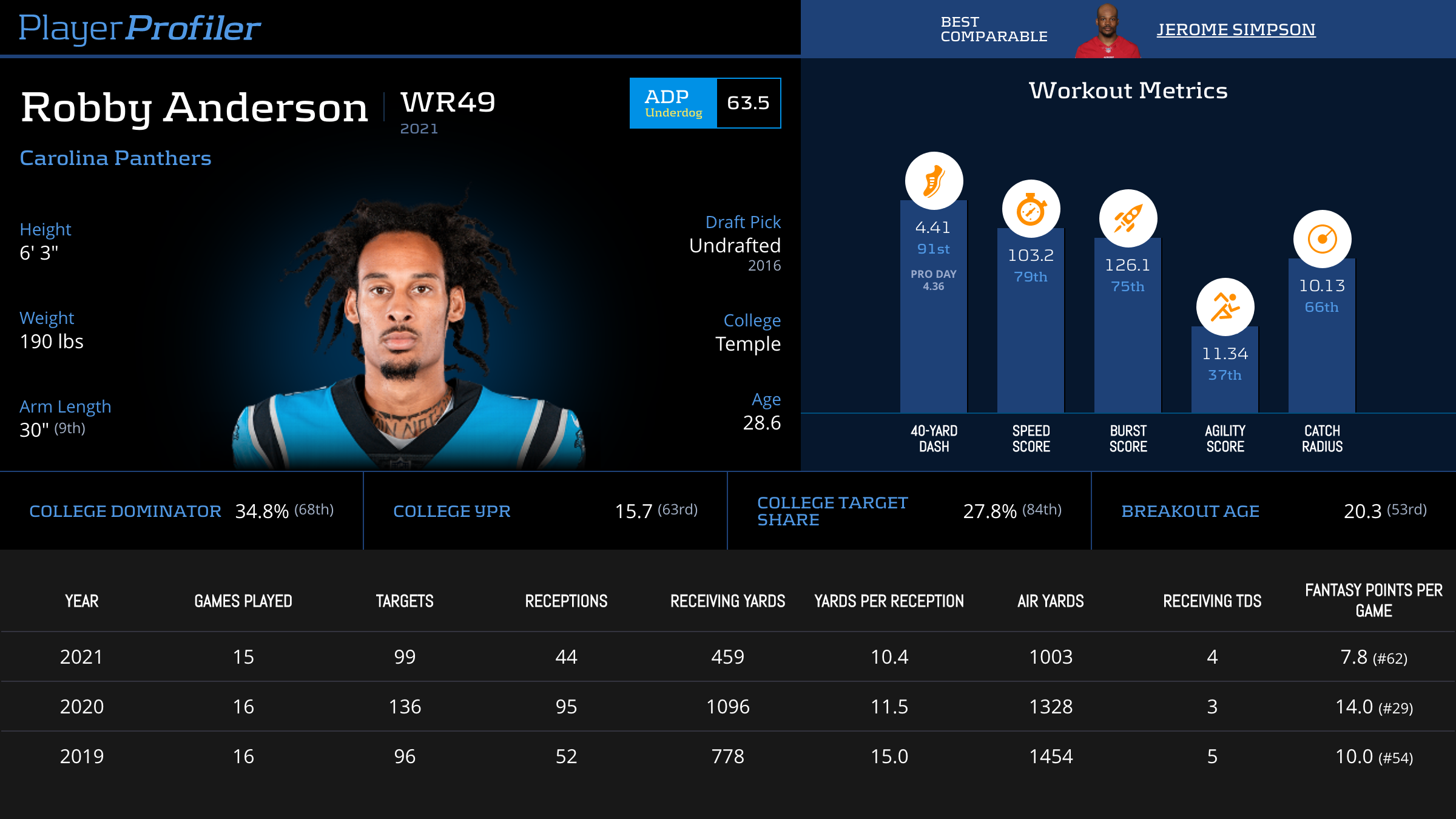 Marquez Callaway has led the Saints in targets the past two weeks. Taysom Hill will likely be throwing him the football this week. The last time Hill and Callaway played, Callaway led the Saints in Air Yards and finished with 17.2 fantasy points. Against a Stephon Gilmore-less Panthers defense, Callaway has boom potential again this week and should be considered a low cost tournament option.

Jakobi Meyers remains the best way to gain exposure to the Patriots passing game. He has seen at least eight targets the past two games and has eclipsed double digit fantasy points in each contest. He is an ideal high floor cash play.

Emmanuel Sanders appeared poised to return to the Bills lineup this week after missing last week with a knee injury. However, he missed practice on Thursday and Friday and may not play. If he suits up, look for him to continue soak up Deep Ball targets (18, No. 23) from Josh Allen. If he doesn’t play, Gabriel Davis (DK: $5,000)  makes for a great analogously priced pivot to include in any Allen – Kyle Pitts stack.

We briefly touched on Darnell Mooney when discussing his teammate Allen Robinson above. Mooney is by far the more reliable fantasy option as he is the WR27 on the season compared to Robinson who is the WR92. He is also not recovering from COVID and has posted double digit fantasy points the past two games. Mooney is a recommended play in all formats.

Marvin Jones and the Jaguars have an implied team point total of 13 points against a stout Patriots defense this week. He is perhaps a bit too contrarian of a play despite finishing as the WR20 in fantasy points last week while seeing 157 Air Yards. However, at only $4,400 he makes for a low cost tournament dart throw that has the peripheral stats to greatly outperform that price.

Good luck to everyone in Week 17. Happy New Year, and may all your Air Yards be realized.