The High Value Touch DFS Index is here to help you find the best plays for the dollar in DFS. This is done by looking at leaders in Carries Inside The 10-Yard Line Per Game and Targets Inside The 10-Yard Line Per Game and comparing their prices on DraftKings and FanDuel to create a rating. We weigh targets higher than carries and take it a step further to weigh it higher on DraftKings (PPR scoring) vs. FanDuel (Half PPR scoring). We look at these touches close to the end zone because touchdowns lead to fantasy points, and fantasy points lead to cashing our lineups in DFS!

I am writing this up as of 12/30/2021. The league is experiencing an outbreak in COVID. Check the news, players could be held out at any time and as we saw in previous games could get moved to other dates. Stay up to date on the latest news. If anyone listed here is out, don’t play them.

This is a big slate, 14 games because we did not have a Thursday night football game and we do not have any bye weeks. With so many running backs available in our player pool, how does the index look this week? Let’s check it out!

James Conner is a game-day decision, so will have to check the news on Sunday to see if he plays. He did have a limited practice today (Friday), so that is encouraging. The last time both Conner and Chase Edmonds played, Week 15 against Detroit, Conner had eight carries and Edmonds had six carries. Conner had a 43.2 percent Snap Share. Conner’s 1.93 carries inside the 10-yard line per game is No. 2 among running backs on the slate and No. 4 among running backs overall. He has multiple touchdown upside, but splitting carries somewhat evenly with Edmonds cuts into his floor.  If one looks at his performances in Week 15, Week 6, Week 2, and Week 1, when he does not score touchdowns he doesn’t score many fantasy points.

Additionally, this is a team that is on a three-game losing streak, averaging just 17 points per game over that span. Is he a 1-2 percent dart throw to put into a couple of MME lineups? Sure. Because he would have to score more than one touchdown to hit value at his price, and those are impossible to predict, I’d look elsewhere for cash games, single entry, and 3 max lineups.

David Montgomery comes in at No. 4 this week against the New York Giants. His 1.64 carries inside the 10-yard line per game are No. 6 among running backs on the slate. The Giants are the No. 26 rushing defense in the NFL, allowing 125.3 rushing yards per game. The combination of the amount of work inside the 10-yard line, his price, and his opponent makes him cash game viable this week. You could roster him in tournaments as well, although he could be the most popular running back on the slate.

Jordan Howard has become a staple on the list here in the late season. His 1.83 carries inside the 10-yard line per game are No. 3 among running backs on the slate, and No. 5 among all running backs. The split of the touches is difficult to predict in Philadelphia. Last week, Boston Scott had 12 carries, Howard had nine carries (season-low), and Miles Sanders had seven carries after getting hurt. He is someone I would consider in cash games as a punt type of a play if I had a specific strategy to target several high dollar players, however, he does not have the upside for tournaments. When he scored two touchdowns in a game, he scored just 17.7 fantasy points. Add the fact that Washington has the No. 8 rush defense, and Howard is not someone I am planning to roster this week. 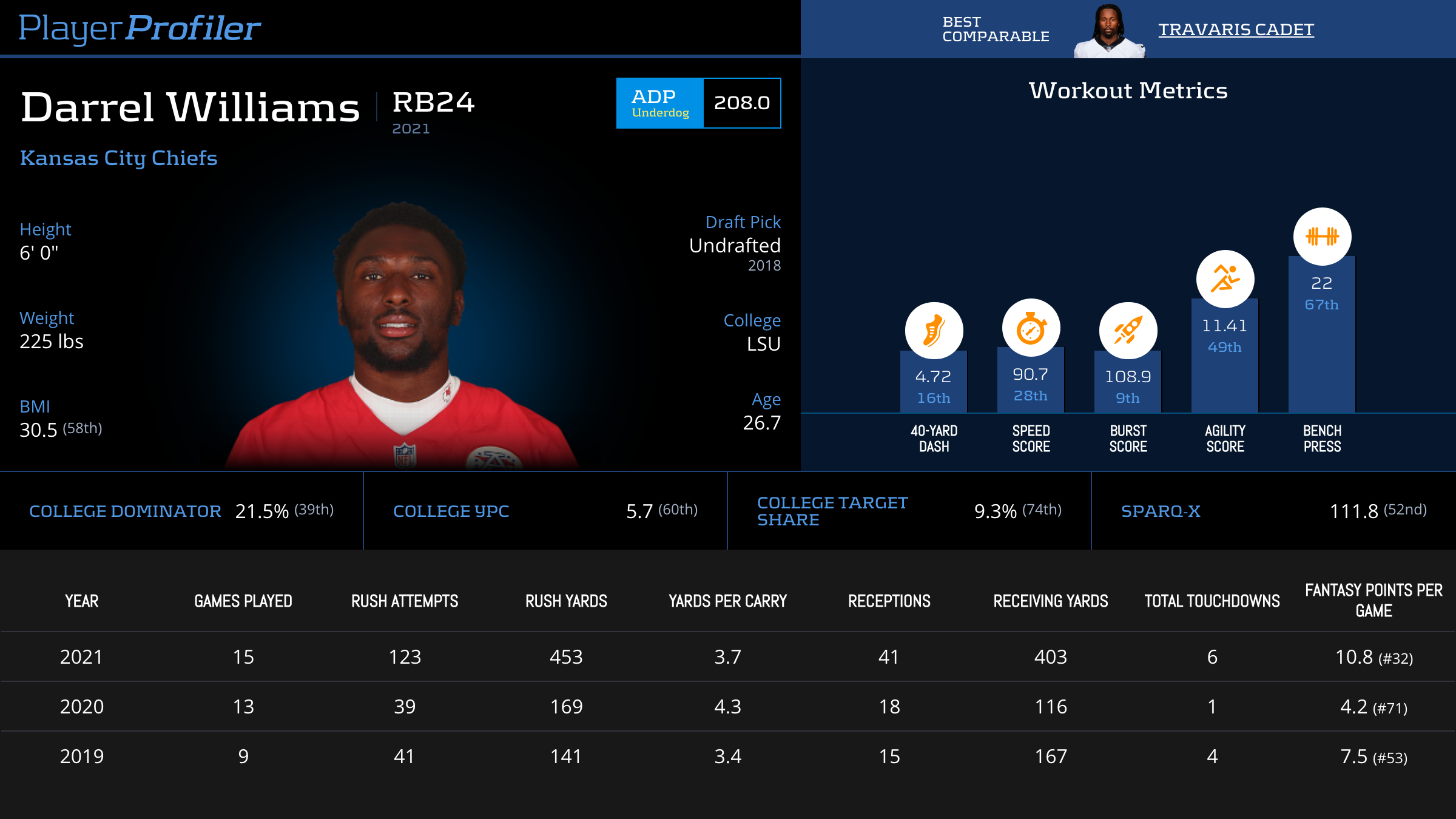 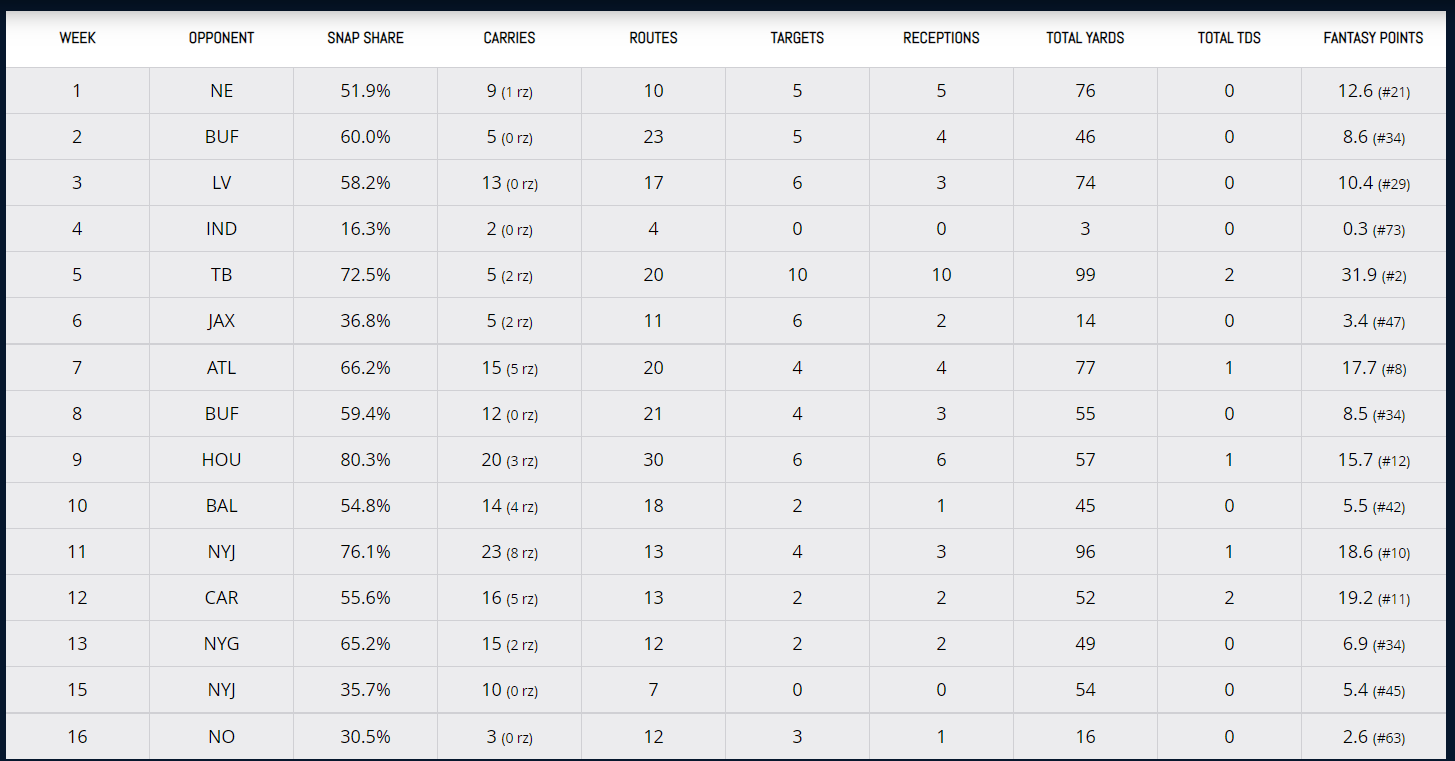 Myles Gaskin finds himself No. 1 on the list, due to him averaging the most targets inside the 10-yard line on the slate at 0.4 per game and his low price. Gaskin has had a declining role in the offense, having just three targets and three carries last week and zero targets and 10 carries two weeks ago. His last red zone carry was three games ago in Week 15. Gaskin is someone to cross off the player pool.

Zack Moss is actually the No. 1 running back in the index. He had not been playing, getting healthy scratched multiple times. He did play last week against New England with a 28.6-percent Snap Share. In that game, he had just three carries and one target. I cannot recommend him but wanted to explain his omission in the above index and inclusion here.

David Montgomery is the top value play at running back this week and would use in both cash games and tournaments. The remaining players in the index are in shared backfields. If they come up in a lineup generator for MME entries into tournaments, that is fine, but they are too risky for cash games, single entry, and three-max tournaments.

We will come back for Week 18 with an update to the index! Best of luck in Week 17!