Courtland Sutton finds his way on the Paying Up section yet again this week. However, the return of Jerry Jeudy stymies some optimism for a boom week coming from Sutton. Last week upon Jeudy’s return to the lineup Sutton saw only 56 Air Yards, with Jeudy and Tim Patrick finishing with 36 Air Yards and 42 Air Yards, respectively. Regardless, Sutton led the trio in Air Yards on the week and faces a Cowboys secondary that can let up some big plays. He is recommended play in all formats however his upside is muted with Jeudy now back in the fold.

D.J. Moore‘s fantasy season has been a a wild roller coaster. Through his first four games, Moore averaged 22.4 Fantasy Points Per Game and averaged 110.5 Air Yards per game. However, in his last four games Moore has averaged only 10.7 Fantasy Points Per Game despite averaging roughly the same, 103.5 Air Yards, on a per game basis. This recent lack of production has driven down Moore’s price and he is without a doubt a buy low.

With Sam Darnold highly questionable and P.J. Walker in line to make a potential spot start at quarterback, Moore is likely to have low exposure and makes for a great contrarian play in tournaments this week.

Kenny Golladay‘s Week 9 status is up in the air as he continues to nurse a knee injury that has sidelined the former prized free agent acquisition since week five. Golladay leads the Giants in Air Yards in games that he has started and hasn’t left early due to injury. In games where he has played over 80-percent of the snaps he has averaged over 100 Air Yards per game. If he plays, he makes for a great value based play. If he doesn’t and you are looking to gain exposure to the Giants offense, teammate Darius Slayton (DK: $4,800), who ranks just below Golladay on the Air Yards value list, makes for a good dart throw as well.

After multiple appearances on this list last season, Tim Patrick finally makes an appearance this year. Averaging 11.3 Fantasy Points Per Game, Patrick left off where he finished last year, averaging double-digit Fantasy Points Per Game. A consistent scorer of double digit fantasy points, Patrick has crested that mark in five of eight games this season. However, he has failed to finish higher than the WR22 in any given week.

Jerry Jeudy’s return muddied the fantasy outlooks for Sutton, Tim Patrick, and himself

Bryan Edwards had been sharing field stretching duties in the Raiders offense as he and Henry Ruggs are within the top five of qualified wide receivers in Average Target Distance. With Ruggs no longer in the NFL to share the field with, Edwards could see a few additional targets each game as the Raiders passing attack consolidates targets. Averaging only 4.3 targets per game, he will either have to see more opportunity or come down with a long touchdown to be a worthy tournament dart throw.

Christian Kirk appears posed to see an uptick in usage this Sunday. DeAndre Hopkins may sit. A.J. Green is on the COVID list and may not play as well. Unfortunately, Kyler Murray may be sidelined with an ankle injury meaning Kirk may see targets from backup Colt McCoy. 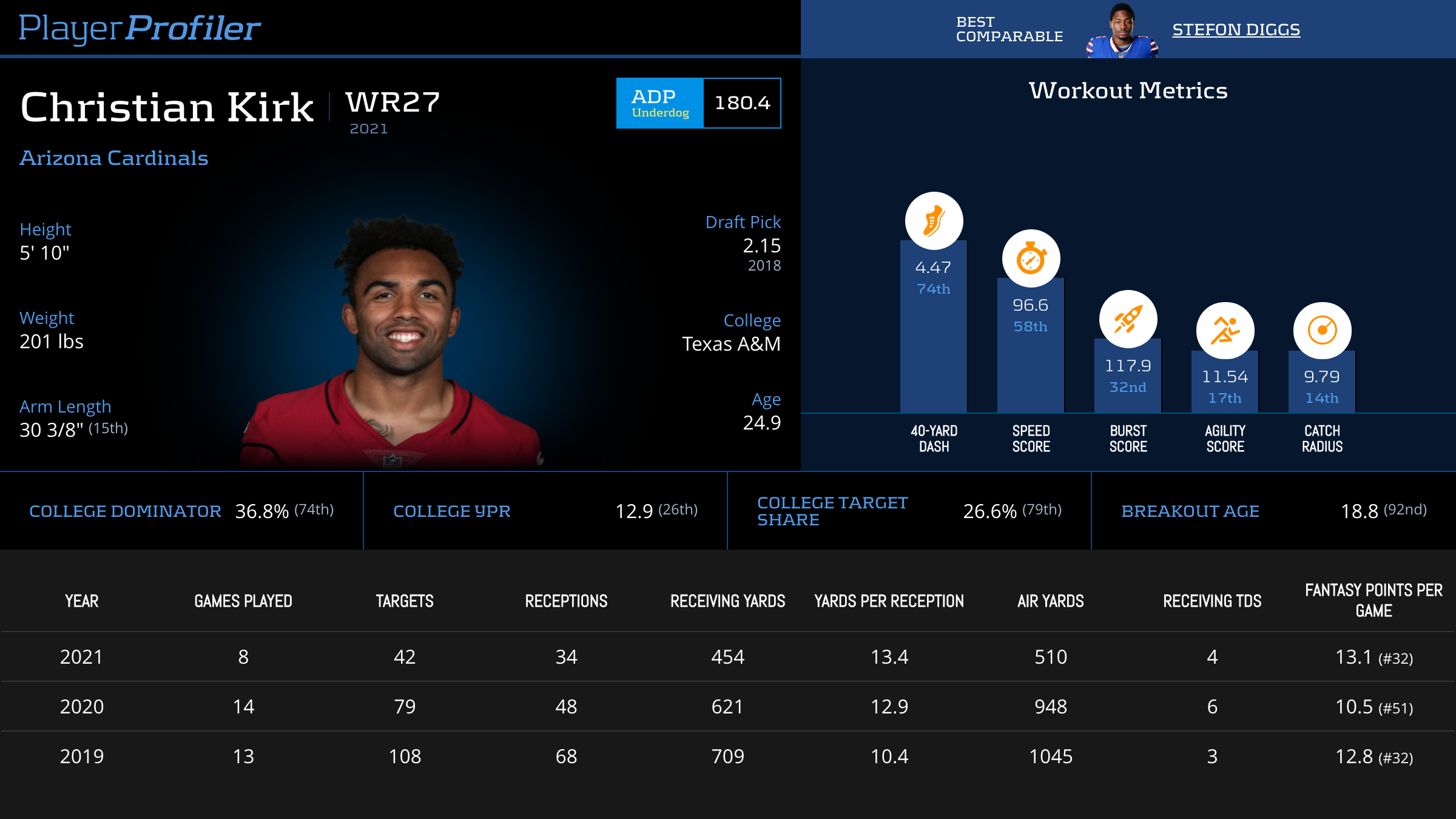 Regardless of who is under center Kirk looks like a good bet to lead the Cardinals in targets and Air Yards in Week 9 and makes for a recommended cash play.

Marquez Callaway‘s fantasy production has taken a hit since Tre’Quan Smith returned to the starting lineup. In the past two games, with Smith healthy, Callaway has averaged only 6.1 fantasy points. While he still leads the Saints in Air Yards during this time, his Week 9 prospects also have taken a hit with Trevor Siemian replacing the injured Jameis Winston at quarterback. While Callaway is set to square of against an exploitable Falcons secondary, it hard to see his Week 9 upside based on recent developments and he should be considered a cash play only.

Tee Higgins is the most exciting name I see on this list. He is about even with teammate Ja’Marr Chase in targets since his return from injury in week five and only trails Chase by two Air Yards during this time.

While Chase is a value of his own at $7,600, Higgins is essentially a $2,300 discount on the same passing game opportunity. For this reason, Higgins is a preferred play in all formats.

Robby Anderson saw one target and scored zero fantasy points last week. He is so close to being booted from this list like 2020 A.J. Green.

Whether you call them Prayer Yards, or Fail Yards, Anderson has to produce something before any sane person places him in a DFS lineup.

Nelson Agholor has led the Patriots in Air Yards the past two weeks. As we have noted before, he is the field stretching option for the Patriots, averaging 14.6 (No. 6) yards per target. He has the potential to go boom in any week based on this usage and should be continually sprinkled into tournament lineups.

We are already talking about a few of them as among the absolute best of the best. CeeDee, Jefferson and Chase — and not to mention Jeudy, Higgins, Claypool, Waddle, Devonta Smith, Bateman, Toney, and that’s just off the top of my head. https://t.co/mudWPJoVKy

DeVonta Smith is setting up again as the contrarian play of the week. He scored only 2.5 fantasy points last week against the hapless Lions in a game where his team scored over 40 points. With key injuries to the Chargers secondary this week, Smith should be able to rebound in a game that the Eagles may be forced to throw a lot to keep up with the Chargers.