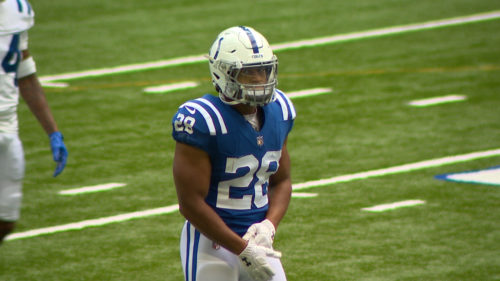 We got our ass kicked in Week 5, hitting on just one Touchdown Dance prop. D.K. Metcalf and Adam Thielen salvaged what was a miserable day of props, with a four-touchdown win on Sunday Night Football. In Houston and Atlanta, we got no help from Calvin Ridley or James Robinson while both were gifted easy matchups.

We’re going to make this one easy, no overthinking. Take the common sense matchup, and run with it. Call it chalk if you will. On other Daily Fantasy Sites, playing chalk might hurt your chances of winning, not on Monkey Knife Fight. Use Derrick Henry and Jonathan Taylor at free will. While both immediate backups are injured, the big dogs should eat.

The Tennessee Titans are 11-2 since Week 10 of the 2019 season. They lost to Houston by three in Week 15 and in the AFC Championship to eventual Super Bowl Champion Kansas City. In those 13 games, Derrick Henry has scored a touchdown in nine and multiple touchdowns in six. Houston is giving up the fourth-most touchdowns to running backs, and ranks No. 32 against the run. 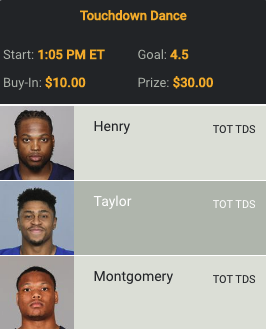 Jonathan Taylor has 19 Red Zone touches in five games, good for No. 9 among qualified running backs. Taylor has turned those 19 opportunities into three (No. 15) touchdowns. Indianapolis plays a depleted Bengals defense that lost defensive line starters Sam Hubbard and D.J. Reader last week. The Bengals are No. 31 against the run in 2020, and without their top run defender in Reader, expect Taylor to melt this game away on the ground.

The David Montgomery experiment in Chicago has been a wild and underwhelming one. Since the Tarik Cohen injury, Montgomery has 30 touches and 116 yards (3.86 yards per touch) while playing two top-six defenses. That changes in Week 6. Carolina has given up the most touchdowns to running backs since the beginning of 2019, and Pro Bowl run-stopper Kawann Short was sent to IR this week.

This Jets vs Dolphins matchup has extreme shootout possibility. Both teams rank bottom five against receivers in yards and bottom five in touchdowns to running backs. Over each of the last two games, DeVante Parker and Preston Williams have combined for over 125 yards receiving. New York’s outside corners Pierre Desir and Blessuan Austin each rank outside the top-60 in the PlayerProfiler’s Cornerback Rankings. 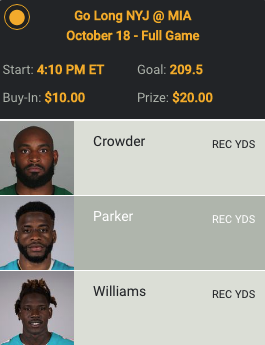 Jamison Crowder has played in three games this season, recording 10-plus targets and 100-plus receiving yards in each while scoring two (No. 15) touchdowns. With Byron Jones healthy and playing on the outside, expect Crowder to continue as the top receiver in New York with Denzel Mims, and Breshad Perriman out.

Heading back to Miami for Prop No. 3 this week. For the same reasons we like Jamison Crowder in the Go Long Prop, we Love him in this More/Less. Crowder has seven, seven and eight receptions in the three games he has played. Drawing a Week 6 matchup against Nik Needham, PlayerProfiler’s No. 72-ranked cornerback, Crowder is due for another boom week. 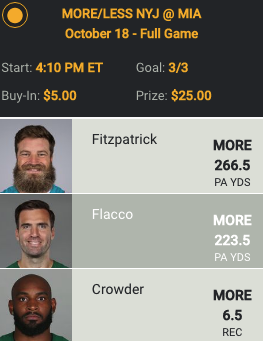 For Crowder, Preston Williams, and DeVante Parker to all go off in Week 6, adequate quarterback play is mandatory. Joe Flacco knocked some rust off against Arizona, throwing for 195 yards on just a 54.5-percent completion percentage. With a shootout looming in Miami, expect Flacco to let it loose against a Dolphins defense allowing 275 passing yards per game.

In true Fitzmagic fashion after a Week 1 loss to New England that featured three interceptions, Ryan Fitzpatrick has rallied off three 315-plus yard passing games since Week 2, going 2-2 and losing to Seattle and Buffalo by one score. With an 87.5-percent Catchable Target Rate when targeting DeVante Parker (No. 6), expect Fitzpatrick to blow past the 266.5-yard projection on Sunday.

In Week 2, rookie Chase Claypool burst onto the scene with an 85-yard touchdown reception. Since then, his Snap Share has doubled from 36.5-percent up to 72.7-percent. In Week 5, with Darius Slay as his main defender, Claypool took the Eagles for a crazy 7-110-3 stat line in the air. With Diontae Johnson hobbled, Ben Roethlisberger will rely on Claypool and JuJu Smith-Schuster, who has a 73.4-percent (No. 13) Slot Rate and 120.5 (No. 13) Yards After Catch. 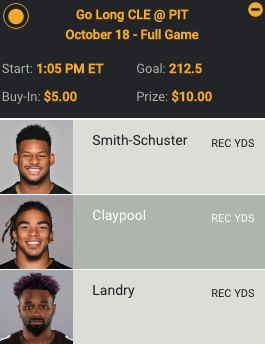 Odell Beckham missed practice again Friday with an illness and is listed as questionable for Sunday. Jarvis Landry will continue to move all over the field and accrue upwards of 10 targets. Steelers slot cornerback Mike Hilton, PlayerProfiler’s No. 95-ranked corner, has given up 90-plus yards on six receptions in each of the last two games.

Grab a drink, and Tune in to the Prop Cast Happy Hour on YouTube Friday Night to see The Podfather walk you through this 8/8, More or Less Gauntlet that features eight quarterbacks from the Early Game Window! 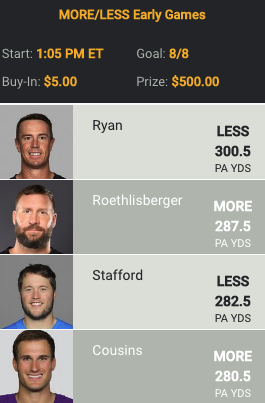 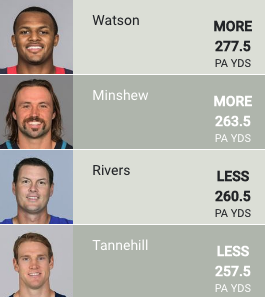 The Podfather’s Week 6 Prop of the Week