Each week, fantasy players question which of their players to insert into lineups and which to bench for that week. A key component in that process is highlighting easy or difficult matchups for players. While an easy matchup does not guarantee a player to have a great performance, it’s certainly a better bet. In this weekly piece, I shine the spotlight on a few different matchups to keep an eye out for as you make your lineup decisions. This is the Matchup Monitor Week 5!

The Patriots backfield is still split between Rhamondre Stevenson and Damien Harris. Yet, both deserve consideration for your lineups in Week 5. Both average just under five yards per carry, with Harris having the edge in carries. Meanwhile, Stevenson gets viable usage in the receiving game with Ty Montgomery out. 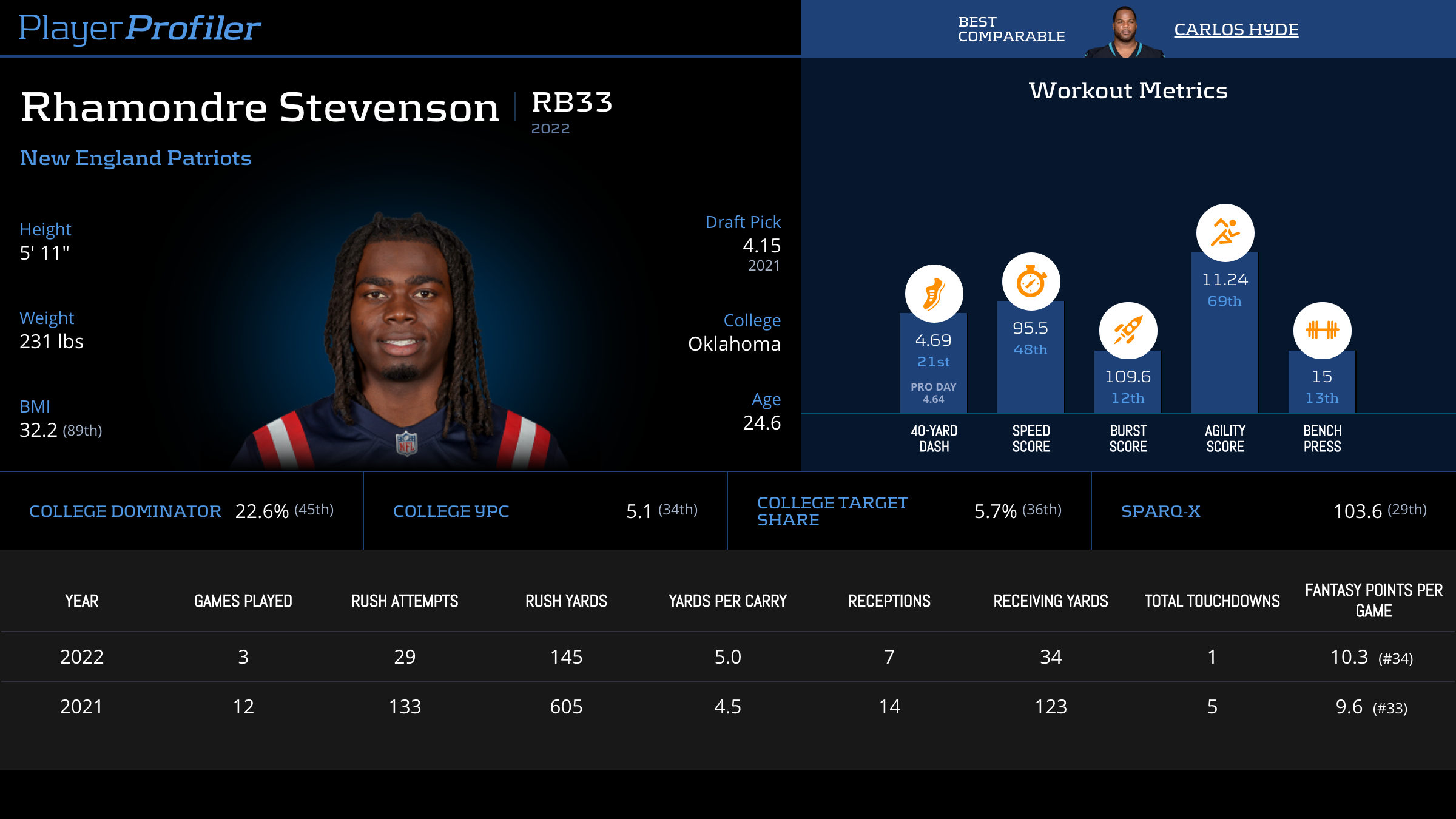 The Detroit Lions are one of the highest-scoring offenses in the league, but they are also one of the worst defenses in the league. Detroit has allowed over 100 yards rushing in three out of four games this season. This includes two games allowing over 200 yards rushing. Expect Stevenson and Harris to also get plenty of touchdown opportunities with the Lions yielding 10 rushing touchdowns this season. With Bailey Zappe potentially at QB, New England will look to lean on its RB duo more. Stevenson and Harris will have enough opportunity against a soft run defense to be utilized in fantasy lineups this week.

Yes, Travis Etienne has been a fantasy disappointment this season. He is yet to live up to his fantasy draft capital. However, he isn’t necessarily getting significantly fewer opportunities than James Robinson. In non-blowout games, Etienne’s Snap Share has been close to 50/50 with Robinson. He even had the same number of carries as Robinson in Week 4. 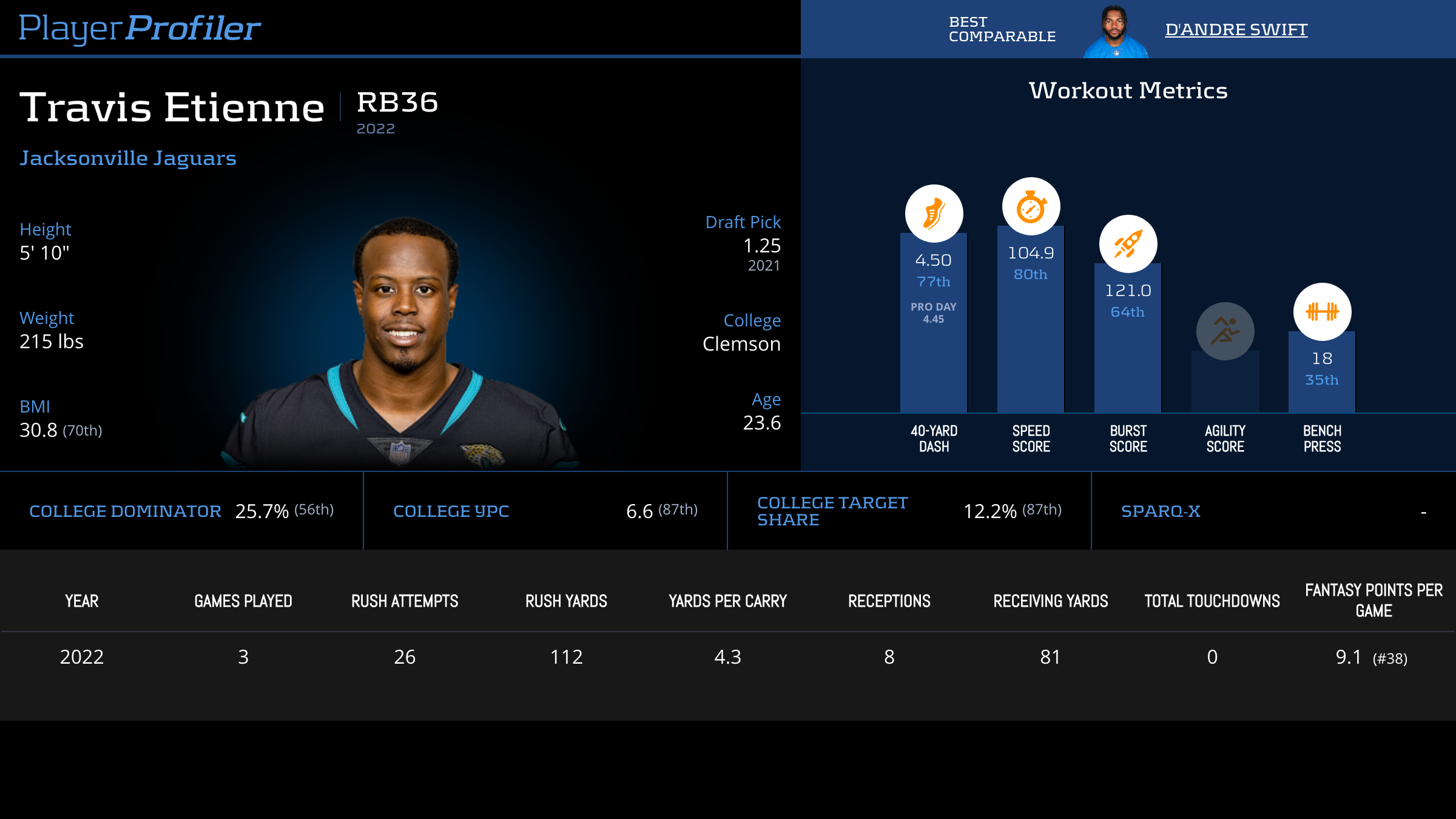 The Texans have allowed over 100 yards rushing to opponents in three out of four games this season. They have also allowed at least nine RB receptions in two of those games and yielded six total touchdowns to RBs. Etienne is the pass-catching back in Jacksonville. He’s seen 11 targets to Robinson’s seven so far this season. The matchup against Houston in Week 5 is the spot for Etienne to finally come through for fantasy owners.

Travis Etienne out-snapped James Robinson in Week 4 for the first time since Week 1. Robinson's 46% snap rate was the lowest of the season for him. Not a surprise given game script, but noteworthy.

Miami has allowed over 300 passing yards to opponents in each of its last three games. The Dolphins’ secondary has given up eight touchdowns and brought down just one interception in four games this season, struggling against chunk plays. 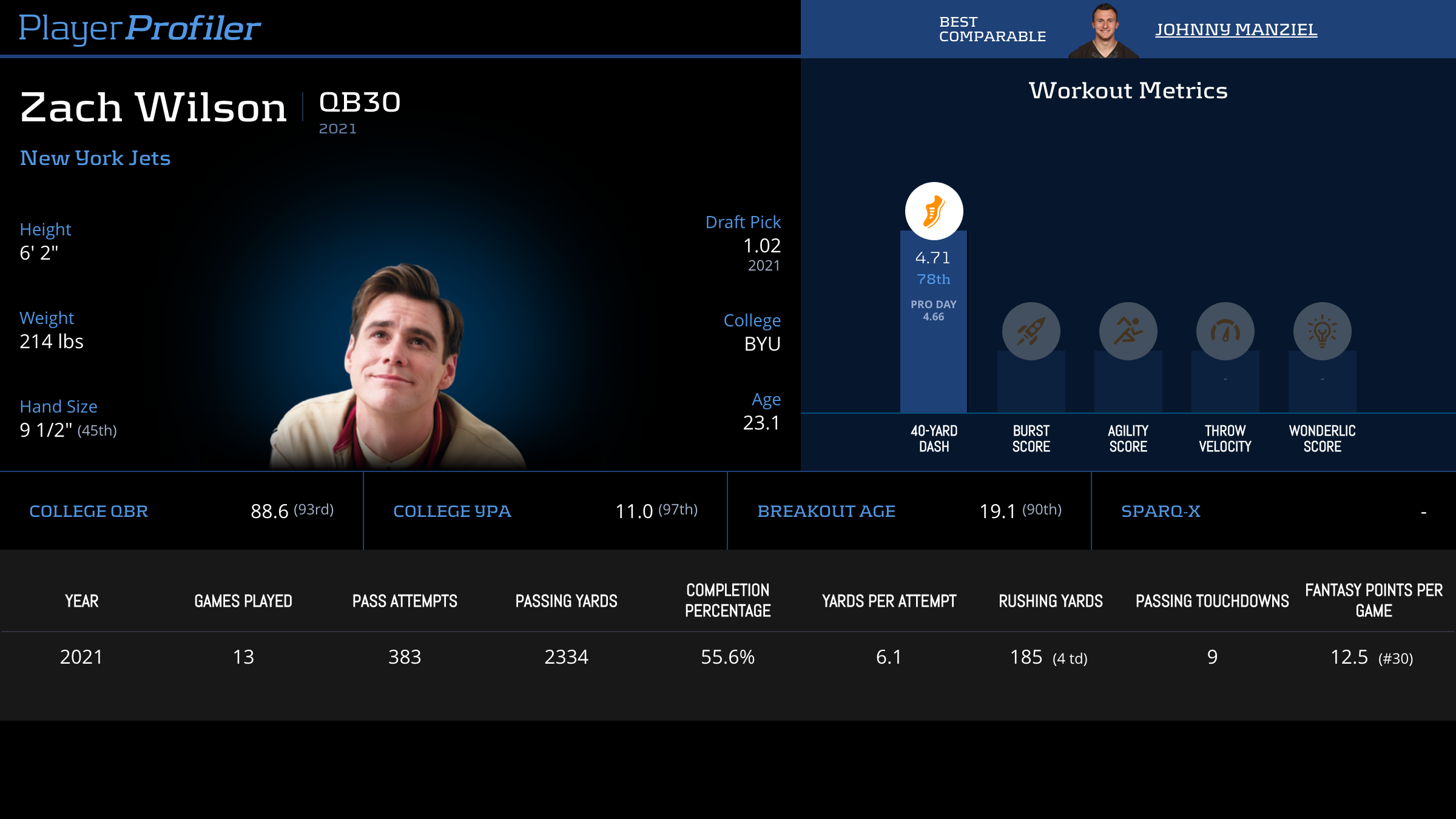 Zach Wilson just returned to action with a 252-yard, one touchdown, and two interception performance in a win against Pittsburgh. His stat line looks underwhelming, with him completing 50-percent of his passes, but he has upside with the Jets’ weapons. A young and dynamic receiving corps facing a struggling secondary will help Wilson’s prospects this week. He also has value as a rusher as he produced 185 rushing yards and four rushing touchdowns last season. Wilson is perhaps a bottom-of-the-barrel option for fantasy, but he has upside in a fruitful Jets offense facing a good matchup that may be more competitive than expected with Tua Tagovailoa out.

The Bills’ defense is still as stout as ever. They are allowing under 200 passing yards per game and shaping up as a deathly matchup for opposing QBs. They are also deadly against opposing TEs. The Bills’ defense has not allowed more than 40 TE receiving yards in a game this season. Most notably, Buffalo just held star TE Mark Andrews to two receptions for 15 yards. 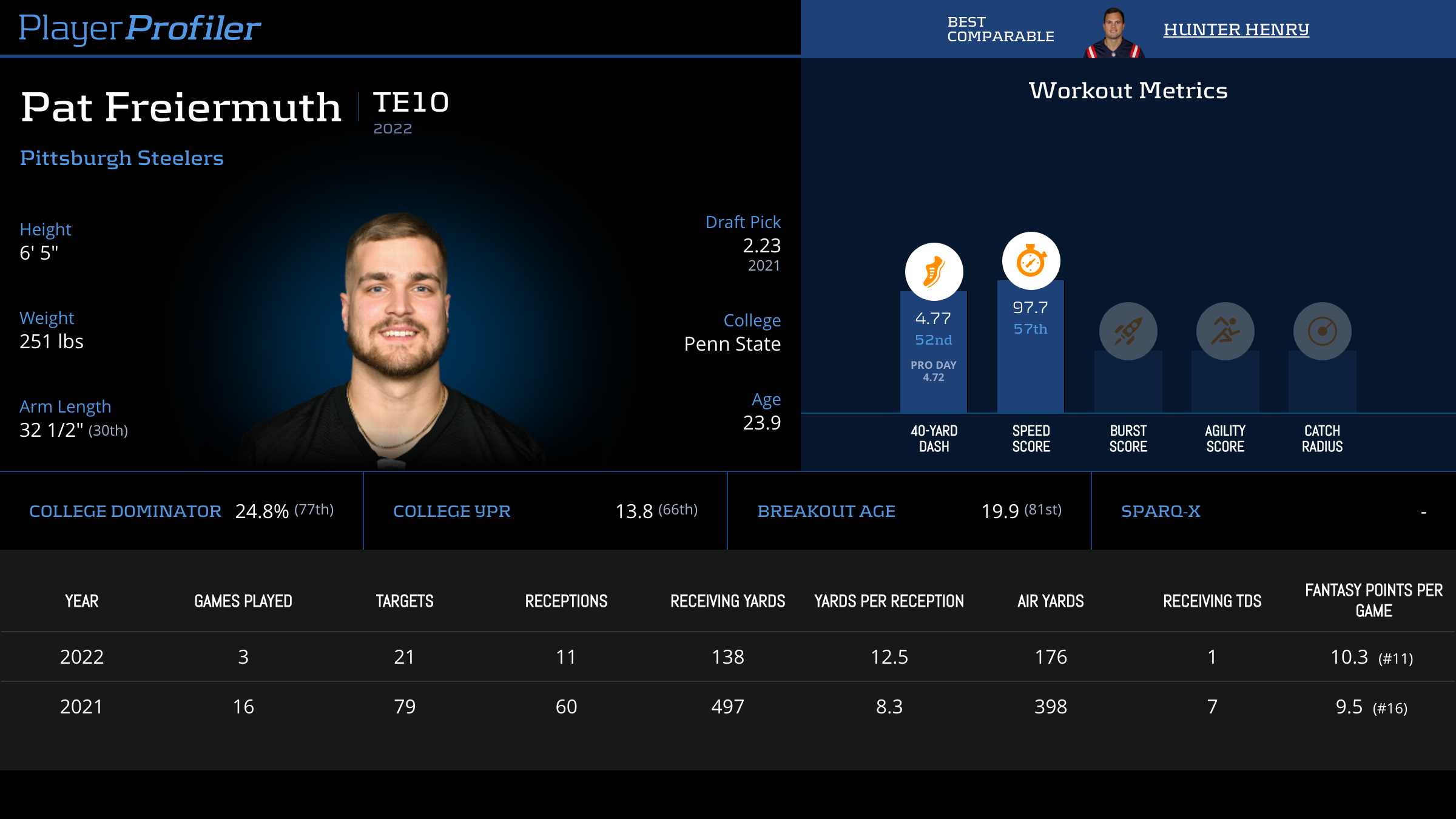 Pat Freiermuth has 30 targets on the season. Rookie Kenny Pickett targeted him often in his debut. It may be tempting to take a chance on Freiermuth’s volume, but he now faces the best defense in the league. With the Pittsburgh offense still adjusting to Pickett at QB, he is unlikely to get viable production in fantasy lineups. Staring down an excellent Bills defense, with a rookie throwing to him, Freiermuth is likely best left on benches.

After back-to-back duds to start the season, the Derrick Henry train is back on track. Henry has been dominant in games that Tennessee has won. He’s succeeded when he gets usage in the passing game. However, he faces a tough Washington defensive line in Week 5. 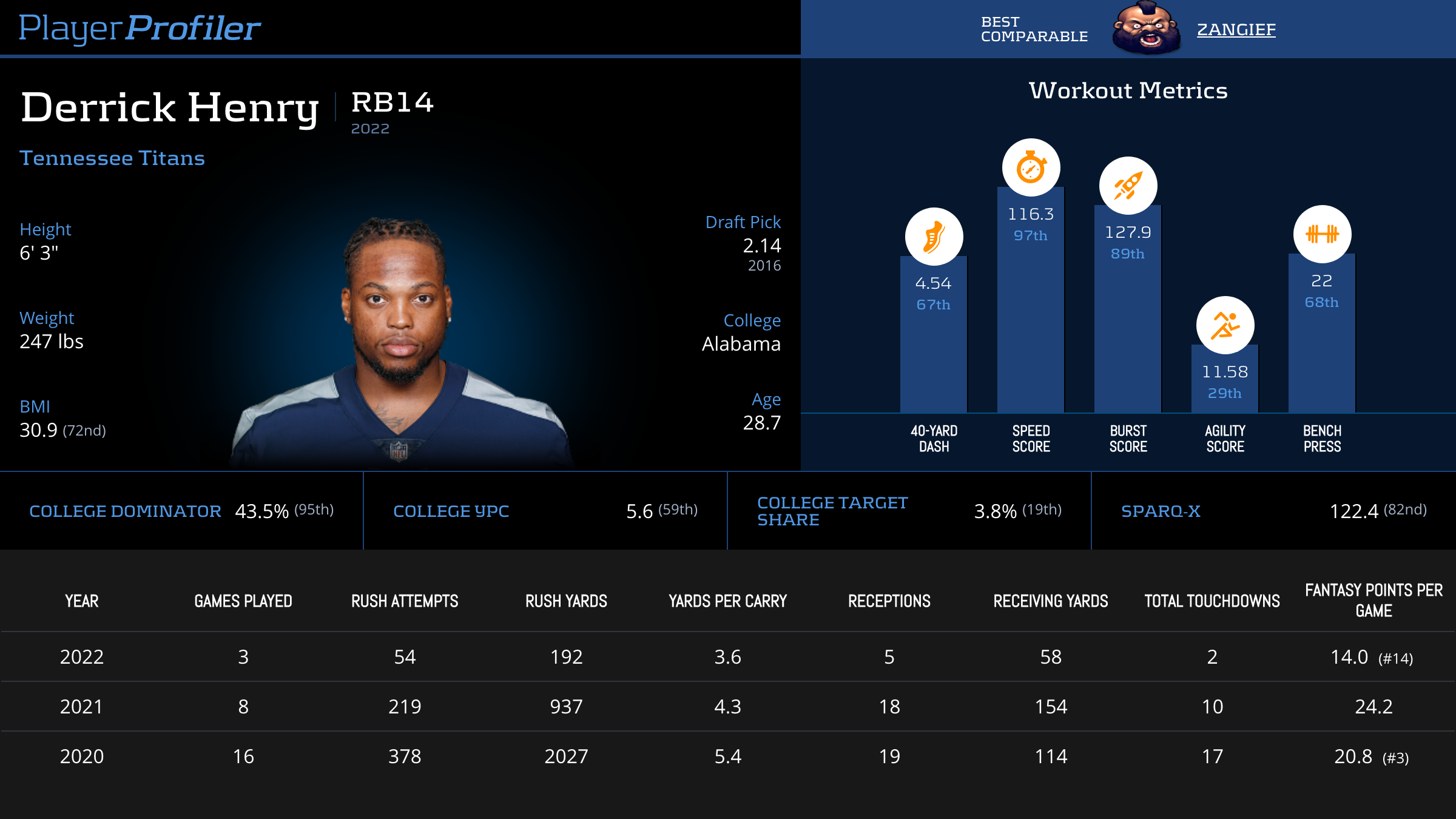 The Commanders allowed less than 100 yards rushing in each of their last two games. The way to beat Washington has been through their air. The Washington secondary has allowed 10 passing touchdowns as opposed to one rushing touchdown. Opposing RBs also average just under three receptions per game against Washington. This may be more of a game for Ryan Tannehill and Robert Woods than Henry. He will probably still be in redraft lineups this week, but exercise caution for DFS plays involving Henry.

The Cardinals’ defense has been solid against the run this season. They have allowed three rushing touchdowns in four games, holding opposing RBs to less than 80 rush yards in each of their last three games. 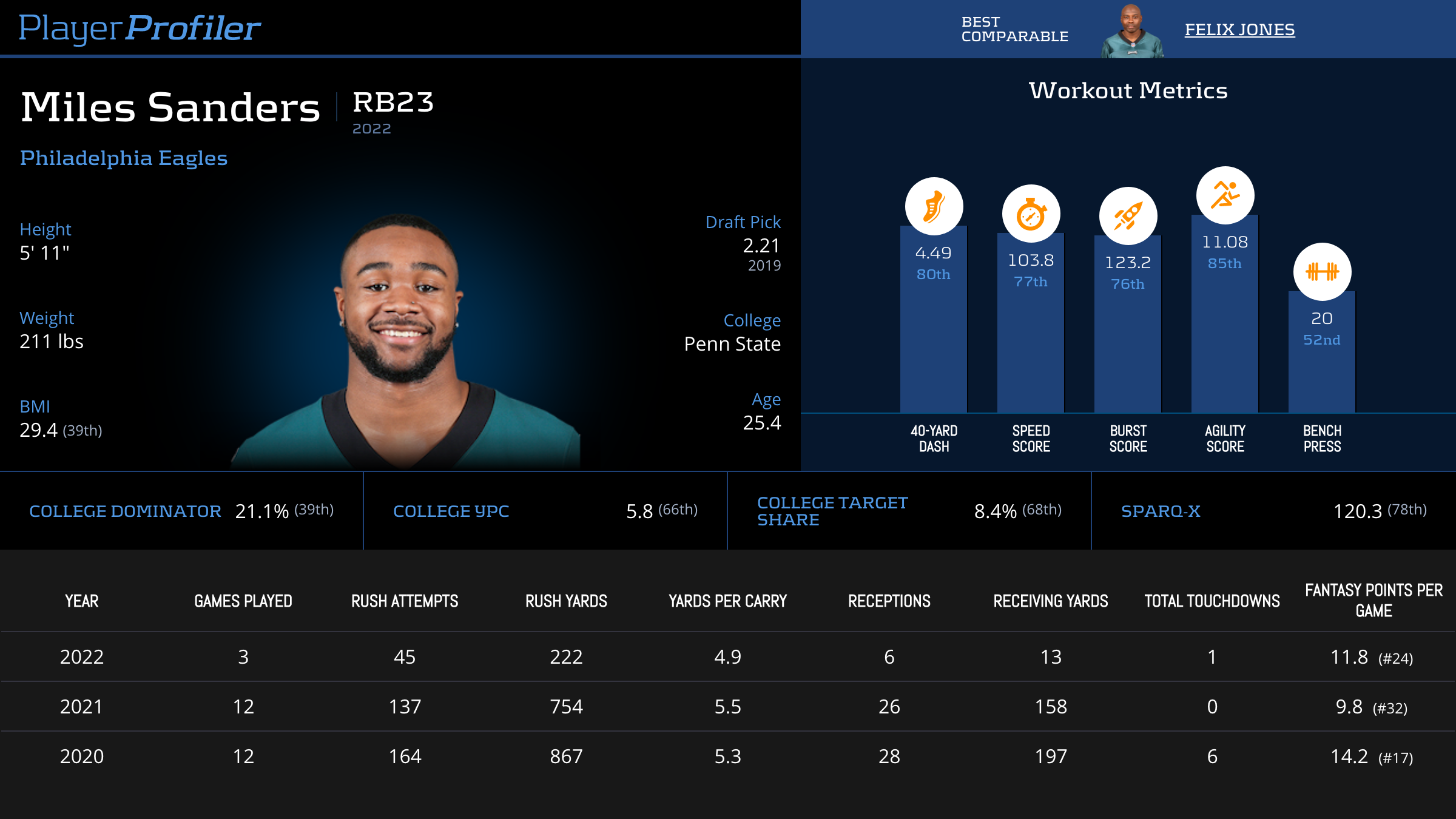 Miles Sanders is the head of the Eagles’ backfield, mostly splitting carries with Jalen Hurts. While Sanders dominates RB touches now, his overall Snap Share is still less than 60-percent, and Hurts is a continuous threat to take rushing touchdown opportunities. Expect the Cardinals and Eagles to play to their respective strengths in a shootout through the passing game this week. Jalen Hurts and A.J. Brown are in for big weeks, but Sanders is in line to be left behind against a solid run defense in what will be a high-scoring, passing-dominated affair.