My esteemed colleague Shervon did a wonderful job highlighting players who saw their stock rise after the NFL Scouting Combine in Indianapolis over the last week. I highly encourage you to go and read that piece, which you can find here.

My job with this piece is to shine the light on 10 prospects who may have actually hurt their draft stock over the last week. Hey, as Journey themselves told us “Some will win, some will lose.” And do you want to live in a world where Journey is wrong? Of course, you don’t.

It’s usually good for someone to stand out in a crowd. A way of setting yourself apart from your competition can lead to good things down the line. I say usually, of course, not all the time. Turning up at the NFL Scouting Combine and presenting 1st-percentile-sized hands is going to make you stand out. But not in the way that Kenny Pickett would have liked. His late 21.3 (35th-percentile among qualified quarterbacks) Breakout Age, 60.9 (14th-percentile) College QBR, and 7.3 (21st-percentile) yards per attempt average were already counting against him in the eyes of many. His 1st-percentile hand size will likely add fuel to a fire among evaluators for whom this metric is gospel. He saved his week slightly with a 4.73 (75th-percentile) 40-yard dash, the third-fastest among quarterbacks. But when only eight quarterbacks run the drill, is it that impressive a feat?

Isaiah Spiller chose not to run the 40-yard dash in Indianapolis, satisfying himself with the vertical and broad jumps. He may come to regret his decision when the draft rolls around. Spiller managed 114 on the broad, tied for the shortest among all running backs with Zonovan Knight. He then managed 30 on the vertical, which was the second-worst effort among the 31 backs to perform the drill.

WE”VE GOT a NEW METRIC to introduce to yous – @noahmoreparties and @breakout_finder present – the BOX-ADJUSTED EFFICIENCY (BAE) RATING 😎https://t.co/irxq0wEjcz

Spiller’s deeds at the Combine see him posting a 108.0 (7th-percentile) Burst Score. He rushed for almost 3,000 yards in college at a 5.5 yards per attempt average while also catching 74 passes across three seasons. He better hope evaluators put more stock into these numbers than what he left on the fast turf of Lucas Oil Stadium.

We liked Kyren Williams before the Combine. Back-to-back seasons with more than 1,000 rushing yards, 35 receptions, and 300 receiving yards are easy things to get behind. We also really like his 12.5-percent (88th-percentile) College Target Share. What we don’t like, however, are 4.65 40-yard dash times on a historically fast track. Particularly when the player in question weighs 194-pounds. No sir, we don’t like it at all, since it led to an 83.0 (8th-percentile) Speed Score. 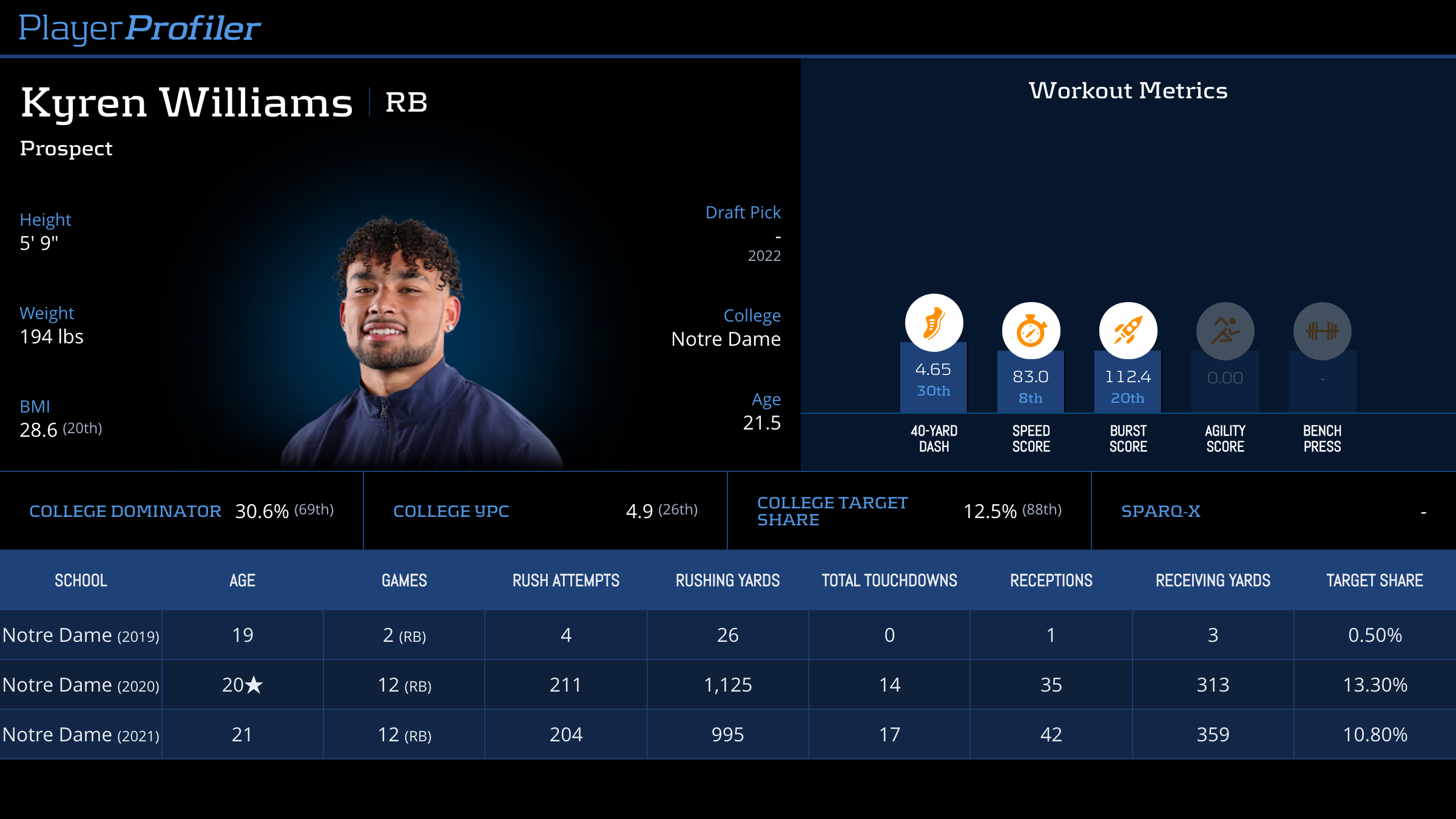 Just to show that his poor showing at the 40 was no fluke, Williams then jumped 116 in the broad and 32 in the vertical. This gave him a 112.4 (21st-percentile) Burst Score. Not a great week Kyren, and the margin for error at your Pro Day is practically non-existent now.

Back-to-back seasons with more than 1,400 rushing yards from Sincere McCormick had piqued our curiosity, especially allied to three consecutive seasons with at least 20 receptions. McCormick coming out early after three seasons with the University of Texas-San Antonio also grabbed our attention. So you can understand why our interest has eased off after his week in Indianapolis. He logged a 4.60 (46th-percentile) 40-yard dash, a time only two backs couldn’t match or beat, at 205-pounds, giving him a 91.6 (32nd-percentile) Speed Score. He did OK in the vertical jump, touching the tip at 33.5 (12th-best among all backs), but then performed an underwhelming 116 broad jump. This gave him a 115.0 (31st-percentile) Burst Score. We sincerely hope this is not the best he can do.

Tyler Allgeier was a force to be reckoned with at BYU. An absolute beast, some might say. Allgeier went to Indianapolis armed with a 35.8-percent (84th-percentile) College Dominator Rating, 5.8 (66th-percentile) yards per attempt average, and 10.0-percent (77th-percentile) College Target Share. With these feats in his back pocket, what did we go on to do at the Combine? Well, not a lot to wow the watching world, to be honest. 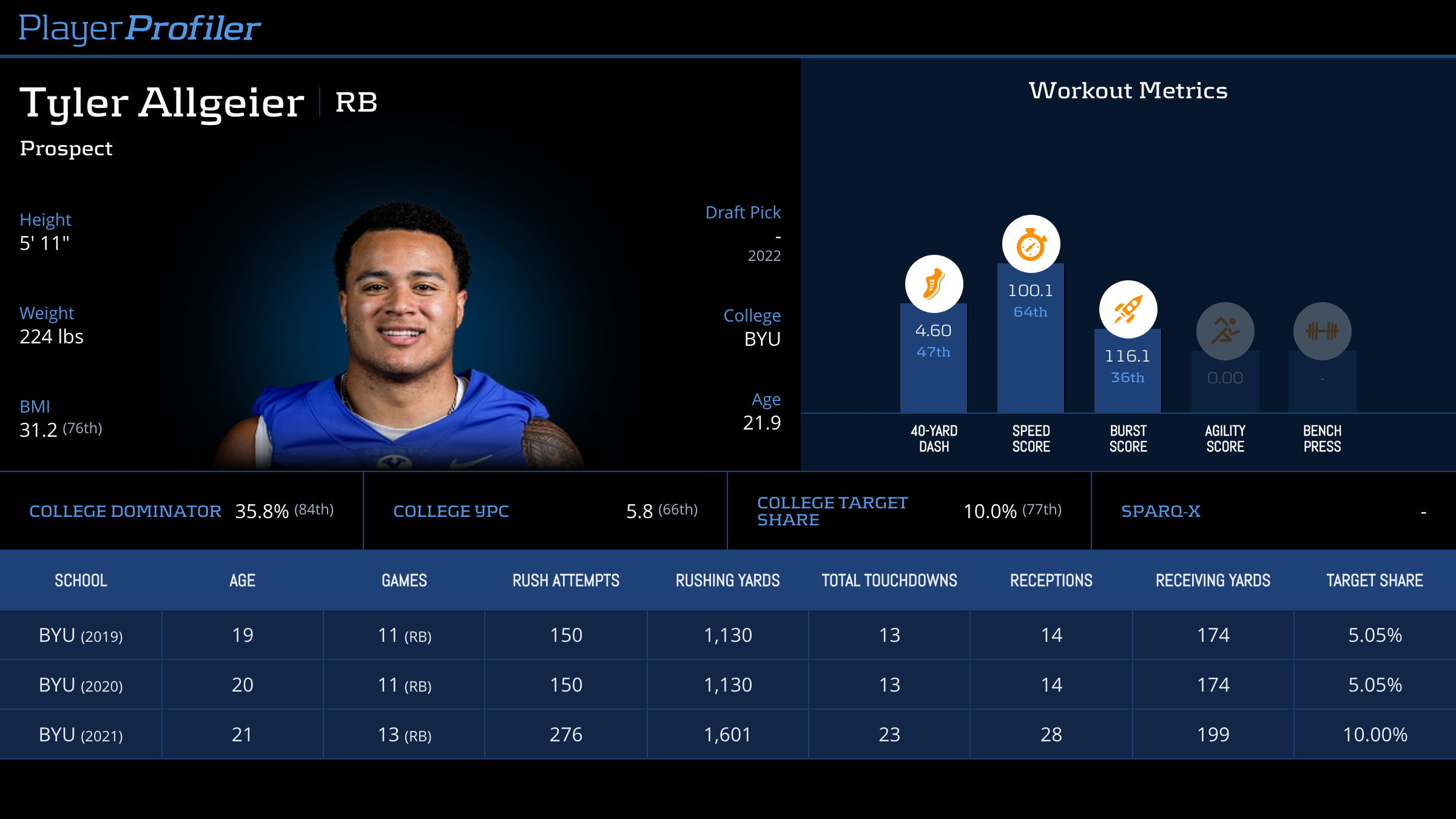 Jerrion Ealy didn’t do a lot wrong in Indianapolis, let’s be honest. He led all running backs with a 128 broad jump and was No. 7 with a 34.5 vertical. Ealy’s deeds in these drills gave him a 122.7 (72nd-percentile) Burst Score. His 4.52 (71st-percentile) 40-yard dash could have been better, of course, slotting in as the 15th-quickest at the Combine. But it’s still 71st-percentile speed, right? Well, it is, and it isn’t. Ealy measured just 5-8 and tipped the scales at 189-pounds. These measurements, allied to the 40 time, give Ealy a 90.6 (28th-percentile) Speed Score. He’s likely projected as a receiving back in the NFL, and his week at the Combine has probably ensured this is his ultimate ceiling…if he’s lucky.

David Bell ticked an awful lot of boxes for us after his college career with Purdue. Bell boasts a 35.1-percent (69-percentile) College Dominator Rating, with an excellent 28.7-percent (86th-percentile) College Target Share, topped up with an elite 18.7 (94th-percentile) Breakout Age. In two and a half seasons with the Boilermakers, Bell averaged eight receptions and 101 yards per game with two seasons of more than 1,000 yards. We were excited to see what he would do when he got to Indianapolis. 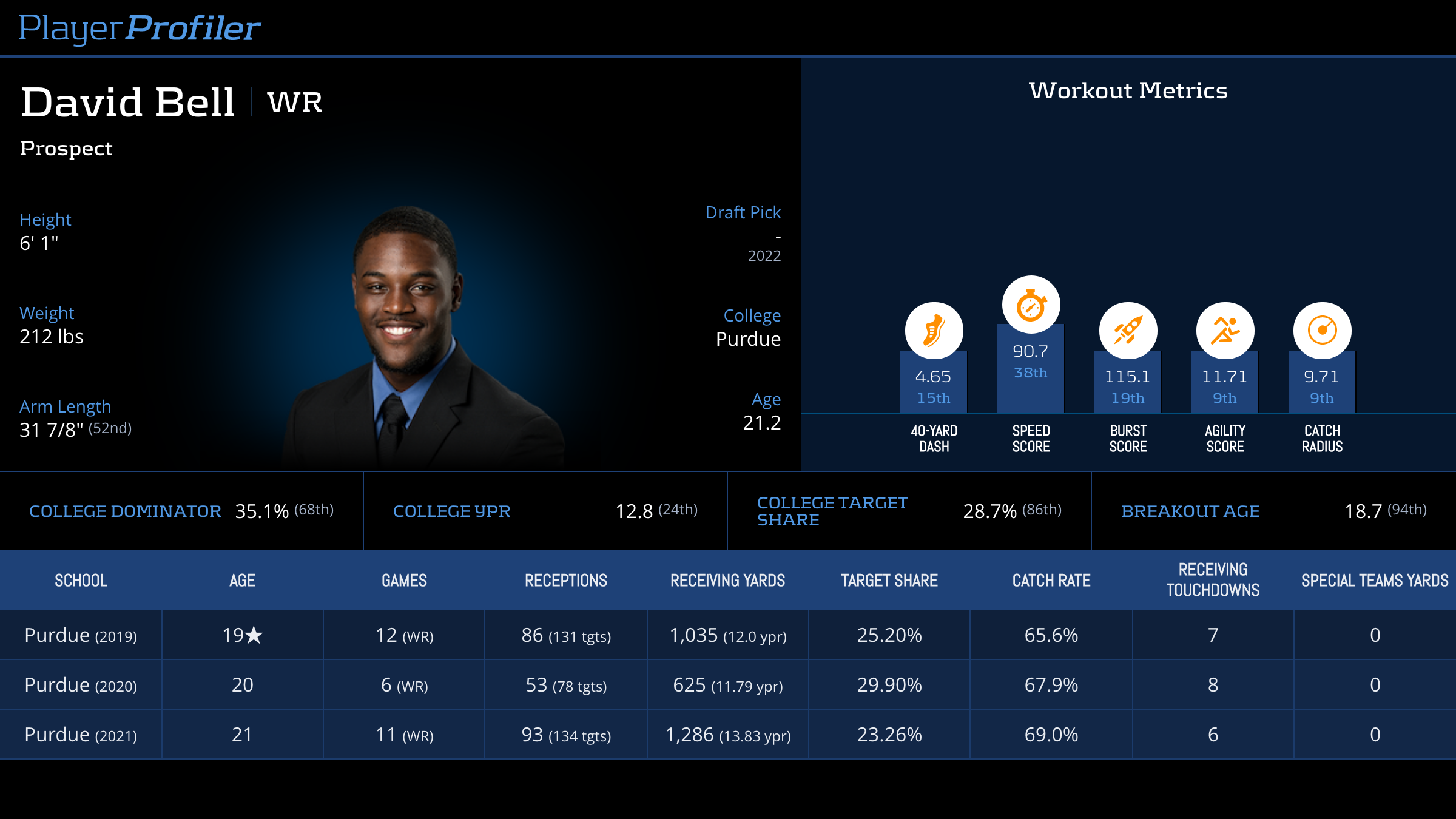 The emotion we are feeling now is not excitement, I assure you. Bell had a week he would like to forget and forget quickly. He posted a 4.65 (15th-percentile) 40-yard dash, the second-lowest among all participating wide receivers. He then doubled down on the disappointment with a 4.57 short shuttle, the slowest of the group. His Speed, Burst, and Agility Scores all make for uncomfortable reading. All of this coming after Bell revealed a 9.71 (10th-percentile) Catch Radius. Wow, and not a good wow.

Slade Bolden needed a strong week at the Combine to ensure he’d be known for more than just being the best buddy of Mac Jones. With the Combine in the rearview mirror, Bolden is known for being the best buddy of Mac Jones. He wasn’t a dominant force for Alabama, with a 7.1-percent (2nd-percentile) College Dominator Rating and 10.8-percent (12th-percentile) College Target Share. But now we know that not only was he not productive, he’s also not athletic either. No one logged a slower 40-yard dash than Bolden’s 4.66 (13th-percentile) mark, leading to a 79.6 (10th-percentile) Speed Score. He was No. 29 of 34 prospects with 32.0 on the vertical. Tre Turner and Reggie Roberson are the only players to have performed worse. That’s “good” for a 10th-percentile Burst Score, and not good for Bolden’s chances of a long, illustrious NFL career.

Romeo Doubs is unusual among this list in that he was hurt by what he DIDN’T do in Indianapolis. Namely, nothing. He didn’t participate in the on-field drills, missing out on a chance to show just how fast and agile he might be. Doubs’ production profile is certainly intriguing, with a 19.4 (80th-percentile) Breakout Age allied to a 32.9-percent (62nd-percentile) College Dominator Rating. He gained more than 1,000 yards in each of his final two seasons with Nevada, scoring a combined 20 touchdowns in that span. He certainly looks the part of an NFL wide receiver given his size. It’s just a shame that we may have to wait until March 21st for his Pro Day to answer our questions about his athleticism.

There is no Kyle Pitts in this year’s tight end class. There is plenty of depth at the tight end position, with a host of players doing their bit to move up draft boards. Charlie Kolar was thought to be one such player. But he decided not to take part in the athletic testing at Indianapolis. This decision was particularly annoying, given how productive he has been for Iowa State over the last four seasons. Kolar owns a 20.6 (66th-percentile) Breakout Age. In the last three seasons, he has had 157 receptions for 2,044 yards with 20 touchdowns. 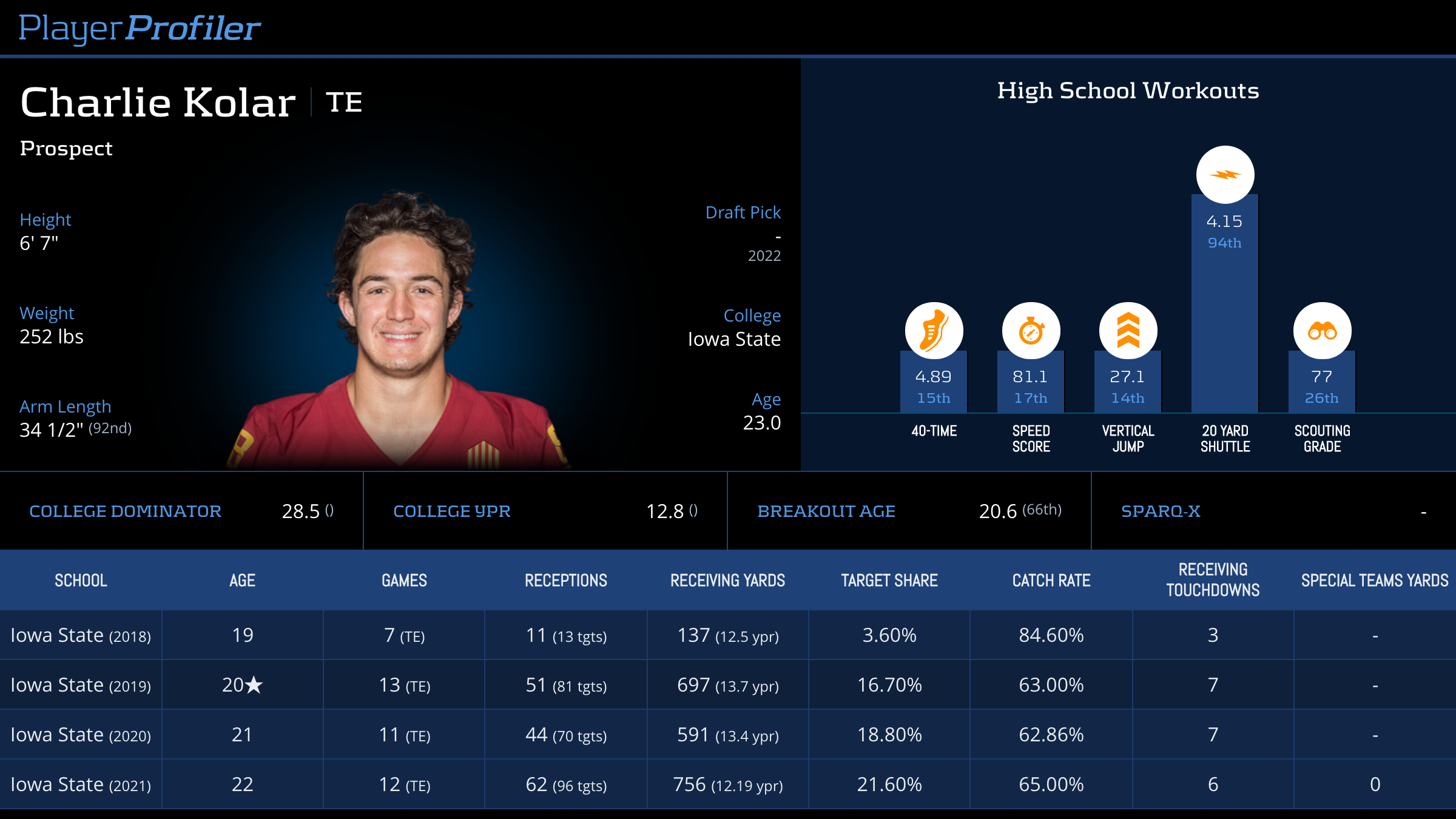 As a tight-end enthusiast, I would like to think that Kolar’s athleticism has increased since his high school measurements. But we will have to wait and see, won’t we?

On to the Pro Day circuit!