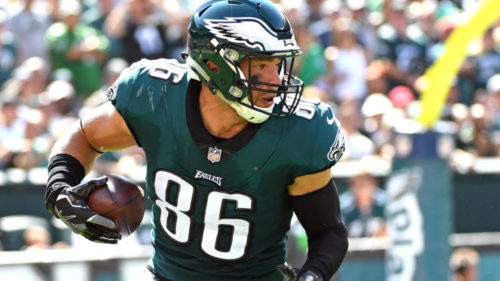 Week 6 brought an abundance of activity to the dynasty stock market. Rookie wide receivers Chase Claypool and Justin Jefferson continue to shine bright, while veterans such as JuJu Smith-Schuster sadly struggled. It’s prove it time for Week 2 market faller Carson Wentz with the prospect of increasing snaps for rookie Jalen Hurts on the horizon. Wentz is now up to nine interceptions on the year and the Eagles have a disappointing 1-4-1 record. Week 1 Market Watchlist candidate Harrison Bryant‘s stock may once again rise with teammate David Njoku reiterating his request for a trade. Oh, and if that isn’t enough news, it’s Tua time in Miami. With wide receivers dominating Dynasty Market Movers of late, the Week 6 report turns its attention to an RB and pair of TEs.

With positive Game Script on his side, Kenyan Drake bounced back in Week 6 to give life to his sliding dynasty value. He continued to receive plenty of rushing opportunities, but his usage in the passing game remains limited. Drake’s fantasy score was inflated by a 69-yard touchdown run in garbage time. With the Seahawks on the slate for Week 7, the Game Script may not be as friendly. Dynasty managers have been given an opportunity to cash out on the soon to be 27-year-old veteran.

With the Las Vegas Raiders and New Orleans Saints on bye, the market momentum slowed on last week’s featured movers Henry Ruggs and Marquez Callaway. The break in the schedule hopefully helped savvy dynasty managers acquire them at value.

Back in July, I wrote a piece comparing the advanced stats and metrics of the 2020 running back draft class with the vaunted 2017 class. In case you missed it, here is the list of the bellcow profile RBs from those two classes that check all these boxes; College Dominator Rating above 20.0-percent, Speed Score over 100.0, at least 6.2 College YPC, and a 10.1-percent College Target Share or higher:

Well, it took a few weeks, but Swift arrived in a big way in Week 6. No one is sleeping on the talented rookie after this performance.

In the tilt against the Jaguars, Swift saw the field on 37.1-percent of the snaps, touching the ball a total of 17 times. He turned this into 123 total yards and a pair of touchdowns. Swift rushed for an impressive 8.3 yards per carry and caught three passes for seven yards. With four targets, he was once again the RB target leader for the Lions.

Kerryon Johnson isn’t much of a factor in Detroit (and probably never was), but the ageless Adrian Peterson refuses to slow down and will likely continue to be involved. Peterson actually had 15 carries in Week 6 compared to 14 carries for Swift. While Peterson may cap the rookie’s ceiling in the short-term, Swift looks the part of a cornerstone piece of dynasty teams for years to come.

The days of Zach Ertz being a locked-in set-it-and-forget-it TE1 have abruptly come to an end. To make matters worse, he’s now sidelined with a high-ankle sprain. Ertz is without a contract extension, and despite a lack of competition in the passing game, his performance on the season has underwhelmed.

Ertz has fallen to No. 11 in PlayerProfiler’s dynasty tight end rankings. His falling stock means a rise in value for Dallas Goedert, who is eligible to come off IR and will soon see action. Expect the third-year TE’s stock to rise. At this point, dynasty managers hoping to extract reasonable value from Ertz’s stock need to hope for a November 3rd trade deadline deal or a more positive outlook in free agency.

In traffic, what a TD for hometown kid, @ColeKmet! ?

The offseason addition of Jimmy Graham has allowed the Bears to ease the 21-year old into the pros. On the season, Kmet has a 32.1-percent (No. 69) Snap Share and has drawn five (No. 63) targets. Last week, he ran seven routes, catching both of his season-high two targets. The athletic tight end scored his first career touchdown on Sunday. Look for Kmet’s role to increase as the season moves along. Monitor his usage. Those in need of future TE production should find a way to stash him in dynasty formats.