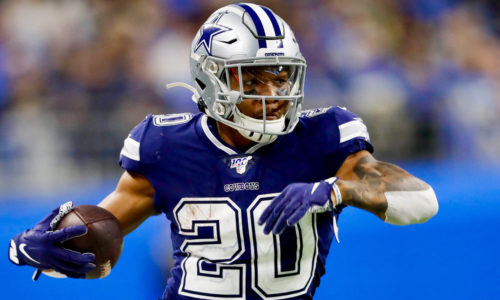 The penultimate week of the fantasy football season is in the books and some recent trends have been reaffirmed. Featured over the last few weeks, Jonathan Taylor and David Montgomery continue to accrue value gaining another 32.22 and 43.30 Lifetime Value points, respectively. After another poor showing and a demotion to a backup role, Todd Gurley’s stock fell further and lost another 11 spots. Let’s dig a bit deeper to uncover more risers and fallers on PlayerProfiler’s dynasty rankings.

Tony Pollard made good on his shot at a lead role following Ezekiel Elliott‘s surprise inactive designation in Week 15. Playing 92.9-percent of the snaps versus the 49ers, Pollard rushed a dozen times for 132 total yards and two touchdowns, going six of nine in the passing game. He was the fantasy RB1 on the week.

Ezekiel Elliott hasn’t reached that in a game since Week 14 of 2018.

Battling lower body injuries for much of the season, third-round rookie Darrynton Evans saw his first game action since Week 5. Tasked with clean-up duty in the Tennessee’s 46-25 rout of the Detroit Lions, Evans had eight carries for 30 yards and added two catches for 27 yards. He also scored his first career touchdown. He showed his 4.41 (96th-percentile) speed on a checkdown for a 24-yard gain. With D’Onta Foreman a healthy scratch and Jeremy McNichols used sparingly, Evans made a strong case to be the lightning to Derrick Henry‘s thunder. He moves up 10 spots to RB44 on the dynasty rankings. Keep an eye on the 22-year old heading into next season.

Brandon Aiyuk was featured as a market riser back in Week 7. In five games played since then, he has 39 receptions for 453 receiving yards and four touchdowns. In 11 games, he has a team leading 733 (No. 31) receiving yards despite playing with a backup QB for a sizeable chunk of the season. Averaging 16.4 (No. 13) Fantasy Points per Game, he sits second to Justin Jefferson among rookie wide receivers.

Hall of famer Jerry Rice holds the 49ers franchise receiving record for a rookie at 927 yards in 16 games. Aiyuk is 214 yards away from the 1985 record, and regardless if he sets a new mark, he’s in good company. His dynasty stock has been steadily climbing, moving up another five spots to WR12.

The youth movement is on in Philadelphia and sixth-round rookie wide receiver Quez Watkins would like to join the party. Incorporated into of the gameplan over the last two games, Watkins has played about a quarter of the snaps. In his second career game in Week 15, he saw a slight uptick in routes run and snaps. He caught three of his season high four targets for 40 yards and a touchdown.

Watkins caught a short screen pass from Jalen Hurts, spun away from oncoming defenders and turned on his 4.35 (98th-percentile) jets on his way to a 32-yard score. With Travis Fulgham‘s playing time and production decreasing, Watkins looks to build on his opportunities and make a late season case for himself. One of the biggest overall movers on the dynasty rankings, Watkins vaults 23 spots to WR95. Stash where possible.

Marcus Mariota had an impressive night in his Raiders debut in Week 15 and made a bit of extra spending money along the way. With Derek Carr quickly ruled out with a first quarter groin injury, Mariota completed 17 of 28 passes for 226 yards and one touchdown. He racked up another 88 yards and a touchdown on the ground en route to an OT loss to the Chargers. Mariota pushed the downfield attempting six Deep Balls, much more aggressive than Carr’s rate of 3.7 per game. It’s yet to be seen if Mariota will see action in Week 16, but in the meantime he jumps 16 spots in dynasty to QB34. The 2014 Heisman Trophy winner makes for an interesting offseason stash in 2QB and Superflex dynasty leagues.

For fantasy purposes, Connor has had good performances. In fact, he has seven games in 2020 scoring inside the top 20 RBs – albeit his output has been boosted by touchdowns. The problem is that there have not been many of these good games of late. Conner hasn’t surpassed 100 total yards since Week 7 and has only done so four times this year. He has a  4.0 (No. 47) True Yard Per Carry average and sees just 2.7 targets per game. Connor’s dynasty stock drops three spots, moving outside the Top 30 at the position to RB31.

Wayne Gallman gave fantasy managers a strong stretch of games between Weeks 7-12. He reached the end zone in all of those games. However, his carry totals have dropped in each of the past three weeks, he has not scored, and his production is trending downward as a result. In Week 15 versus the Browns, Gallman ran nine times for 29 yards. He was not targeted. Alfred Morris rotated in and Dion Lewis caught both running back targets. To make matters more crowded, Devonta Freeman has been designated to return from injured reserve. The 26-year old Gallman falls five spots in the dynasty rankings and slips to RB43.

Michael Thomas has had a season to forget in 2020. A high-ankle sprain, hamstring injury and a teammate scuffle have limited him to 40 (No. 62) receptions for 438 (No. 72) receiving yards in seven games played. This is a far cry from his league leading 149 receptions and 1,725 receiving yards a year ago. 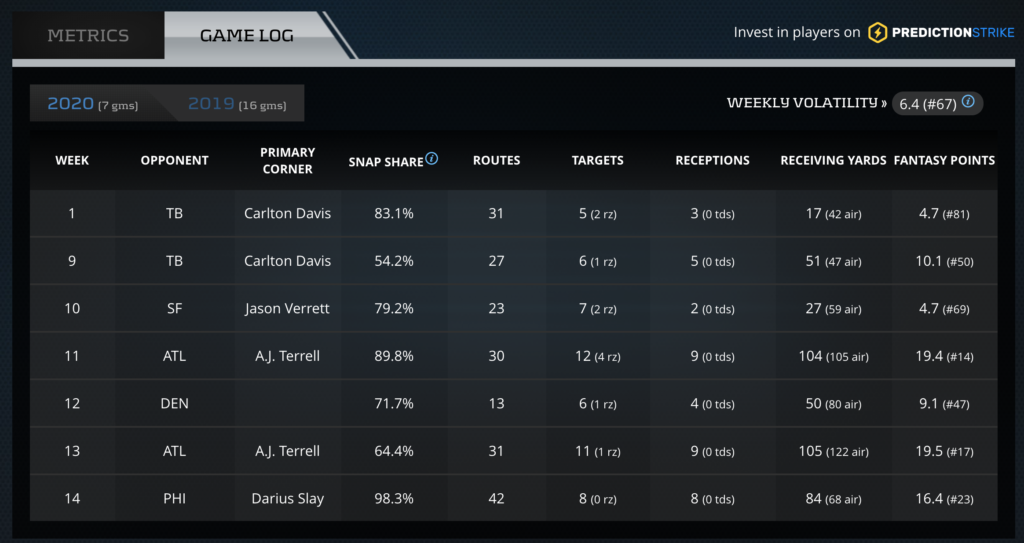 With his ankle injury nagging and with high postseason hopes, the Saints opted to place Thomas on injured reserve heading into Week 15. Obviously, this ends his availability for dynasty leagues in 2020. Hopefully a return to form in the post season can help to rejuvenate his dynasty stock. For now, the soon to be 28-year old is among the biggest losers Lifetime Value points, slipping from WR8 to WR11 on the rankings .

The much talked about lack of receiving options in Green Bay hasn’t helped Marquez Valdes-Scantling become a more consistent option in 2020. In 13 outings this season, he has produced 6.6 or less fantasy points seven times and fewer than one point in three of those games. However, he also has four outputs with 19.3 fantasy points or more. The past three weeks have been especially volatile, with a 20.5 (WR12) Week 14 performance bookended by games with -0.4 and 0.0 points. Unsurprisingly, Valdes-Scantling’s targets have also been all over the map on a per-game basis. He has a season high of eight targets and a low of just one. Nearly impossible to trust in fantasy lineups, MVS drops another eight spots in the rankings to WR85 – he’s down 16 spots over the past three weeks.

Reunited with coach Frank Reich, his offensive coordinator with the Philadelphia Eagles, Trey Burton has had TE1-level moments this year. Three of them to be exact (Week 6, Week 8 and Week 12). Recently, Burton has seen season low Snap Shares and target numbers. He was not targeted in Week 14 and has five total targets for two receptions for 19 yards in the last three games.

The 29 year old sits at TE49 after losing 11 places in the dynasty rankings. Entrenched in a TE committee and a distance option in the Colts’ passing game, hopefully Burton is not clogging your dynasty roster.