The 2021 NFL season has finally arrived, and with that comes the return of The Infirmary! Though it is a strange feeling to hype up a written piece pertaining to injuries, someone has to do it. As horrible as they are, injuries do provide one positive outcome- opportunity for others. Identifying where the opportunity will land is key, but not always as clear cut as some might think. The current Ravens backfield situation is a prime example (more on that later). But the first Sunday of football has arrived, and it’s the least crowded The Infirmary will be all year, so let’s get to it!

Tre’Quan Smith is set up for a big year due to Michael Thomas‘ injury situation. Though Marquez Callaway is the clear No. 1 and the beneficiary of Thomas’ absence, Smith was poised to handle the field opposite him. Now, moved to IR with a bad hammy, he’ll have to wait at least three weeks before returning to the field. Meanwhile, the wide receivers behind him are Deonte Harris and Lil’Jordan Humphrey. No one should be excited about these players.

However, the Saints did sign veteran Chris Hogan this offseason, and that is more a compelling option for this writer. He has experience, including time as a trusted member of the Patriots, and is more athletic than Harris and Humphrey (It’s true, it’s damn true). Though his 40-Yard Dash was average, the other workout metrics were all above average, including a 10.90 (86th-percentile among qualified wide receivers) Agility Score. He’s certainly worth a flyer in deeper leagues, in case Jameis Winston takes a liking to him.

Obviously the biggest names on the list are Saquon Barkley and Austin Ekeler, especially given the position they play. For Barkley, this is the end of a long rehab on a torn ACL. There was concern earlier on the offseason he may not be quite ready for Week 1, yet it sounds as though he’s good for the opener. Sure, there’s the possibility he’s on some sort of snaps count, but there’s no reason to get cute here. If Barkley suits up, plug him in. As for Ekeler, the hamstring issue is new and is not great news. These hammy issues tend to linger for players, and could certainly be something that hampers the Chargers back from the beginning.

Recall Adam Thielen‘s hamstring injury from 2019; he attempted to play a week after it happened but didn’t last and missed several games after. It’s a situation that needs monitoring. As for who steps in if Ekeler can’t go? That looks to be Joshua Kelley and rookie Larry Rountree. Justin Jackson should maintain his role regardless. Without Ekeler in the lineup, this could turn into a full blown committee, but there’s still hope for Kelley truthers out there. Everyone just needs a reminder of the man’s potential, that’s all. 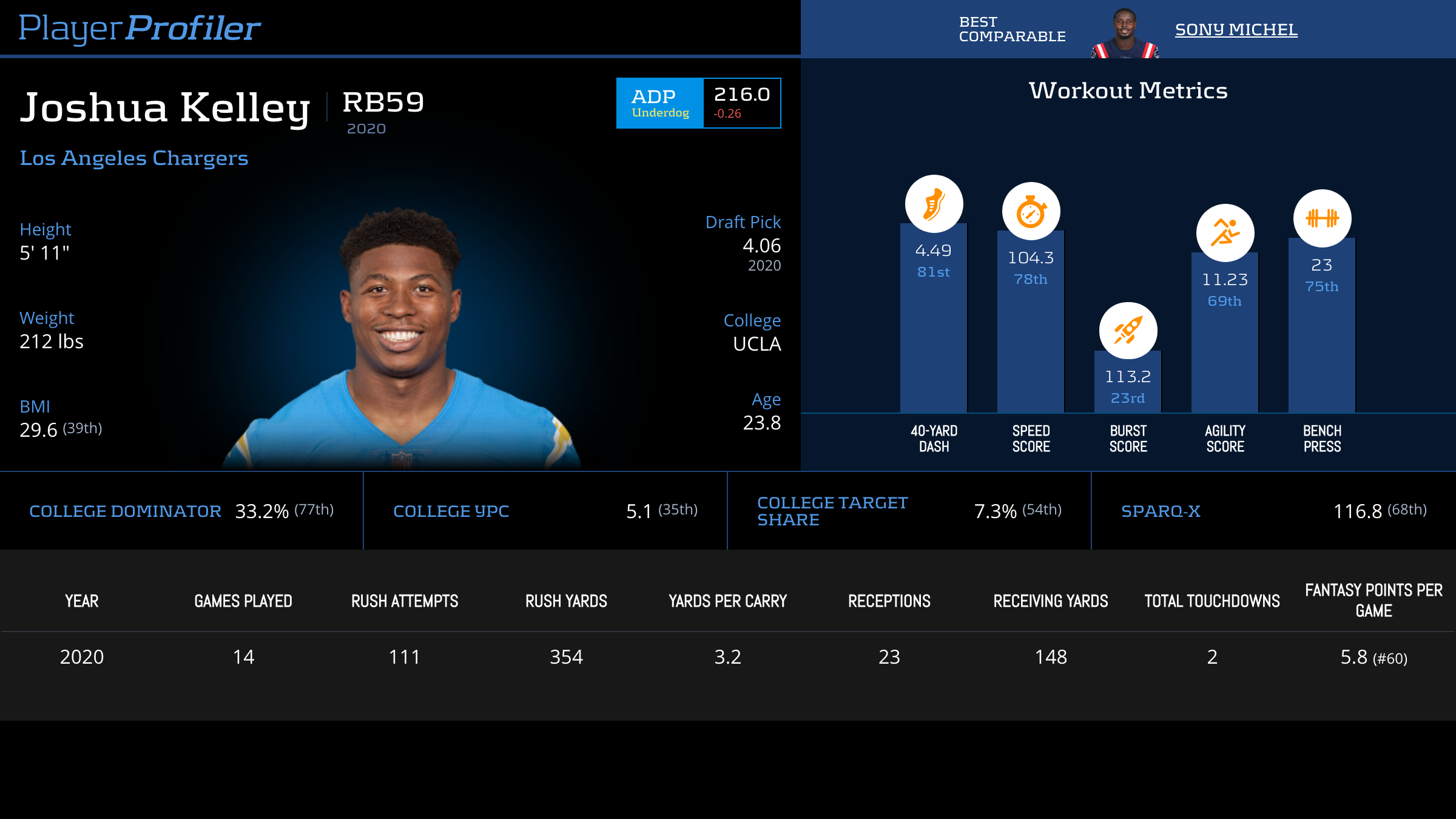 At the wide receiver position, most seem likely to play this week. The one with the most concern seems to be Odell Beckham, who has been recovering from a torn ACL himself. Should he be activated for the game, Beckham could have a big day against in what is a probable high-scoring affair against the Chiefs. Assuming, that is, that the “connection” issues between he and quarterback Baker Mayfield are settled. Darnell Mooney is the other significant wideout on the list, though a match versus the Rams defense with Andy Dalton throwing the ball will likely not yield exciting results anyway. Better to hold off on Mooney for another week.

The running back situation of the Baltimore Ravens is an unenviable one. Not only was J.K. Dobbins lost for the year, but so were Justice Hill and Gus Edwards. That leaves Ty’Son Williams… yeah. A 2020 undrafted rookie out of BYU, Williams does have some speed to him, evidenced by his 4.53 (71st-percentile) 40-Yard Dash and 104.5 (78th-percentile) Speed Score. However, there is no data on the other workout metrics, and his College Dominator Rating, College YPC, and College Target Share are unimpressive. 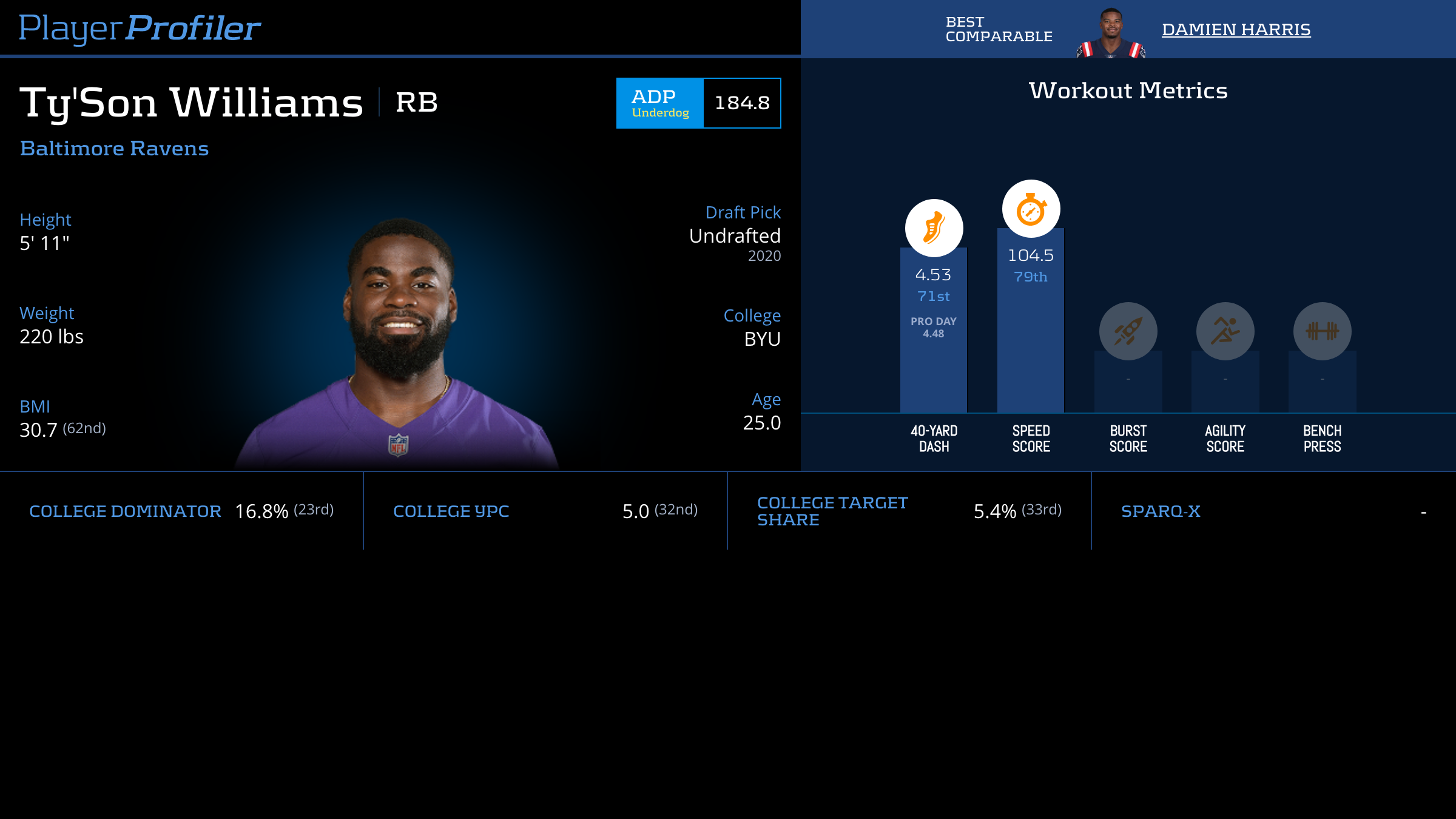 The flock did sign a trio of veterans in Le’Veon Bell, Devonta Freeman, and Latavius Murray, the latter of which is very interesting. Out of the three, Murray would seem to have the most “gas left in the tank” and fits Edwards’ role perfectly. Expect Murray and Williams to share the workload for at least Week 1, but let’s be real about this, folks. This all likely means that Lamar Jackson will just run it himself more than he ever has, and perhaps, lean more on that passing game like they intended. Either way, it’s hard not to see these running back injuries as a potential bump for the former MVP.

Once again this must be said… The Infirmary will never be so quiet again!!! This is the way of the football, my Mad friends. Injuries are just a “part of the game,” as they tend to say. The battlefield will only consume bodies from here on out, so be prepared. And when it comes to preparation, there’s no better spot for injury news and analysis than The Infirmary! Good luck to all on this opening Sunday!