Patrick Mahomes posted his highest yardage total in Week 6 and looks to pick up where he left off for Week 7. Of the highest totaled Week 7 games, the Chiefs/Titans game has the closest Vegas point spread (5.5). The game itself has the highest game total (57.5) and seems the likeliest for a shootout (or whatever it’s called when you’re having to keep up with Derrick Henry).

The Titans defense shouldn’t give Mahomes much trouble as they have had a slew of injuries on the defense. Whether by injury or poor play, the Titans defense has become a bottom 10 defense in yards allowed and touchdown passes allowed to opposing quarterbacks (h/t Pro Football Reference). Mahomes’ 40.3 Attempts Per Game, 319 Air Yards Per Game and 18 Passing Touchdowns are all top three at the quarterback position. Pair him with Tyreek Hill with a Derrick Henry runback for maximum returns.

Rodgers has been a serviceable fantasy quarterback, cobbling together some solid 20-plus fantasy point efforts in recent weeks. The Washington matchup could be what’s needed to push Rodgers into that 30-point range for tournament viability. On average, the Football Team is allowing opposing quarterbacks to score 29.5 DKPt per game (No. 1). In what could equate to some positive regression, consider Rodgers’ 5.16 (No. 7) Deep Ball Attempts Per Game despite completing only 29-percent (No. 25) of such passes. What better matchup than this one to boost up that Deep Ball Completion Percentage and rack up some fantasy points as well?

At $5,700, Matt Ryans‘ ceiling is pretty much baked into his price. He hasn’t been all that bad either recently with three of his last four games reaching 22 or more fantasy points. Atlanta’s 25 point total and No. 12 aFPA matchup against the Dolphins puts him firmly in play. Furthermore, only Tom Brady and Justin Herbert have more Attempts Per Game. You can certainly do worse at such a bargain salary.

“I’ll Never Be Like Other People, But That’s Alright Because I’m Cordarrelle”

Cordarrelle Patterson‘s re-emergence has to be one of this seasons’ biggest surprises. The former first rounder had been mislabeled a “bust” before finding a fit with the Falcons for his dual-threat skillset. After a handful of useful fantasy outings, the knock on him (on Twitter at least) was his low 30-percentish Snap Share.

In Week 5 however (heading into the bye), Patterson saw a season high in both carries and snaps (14 carries on a 59-percent Snap Share). Patterson’s No. 1  marks in Receiving Yards Per Game (59), Targets Per Game (6) and Receiving Touchdowns (4) are even more impressive considering the early bye. Expect the Falcons to phase out the mostly ineffective Mike Davis and opt for more worthwhile touches for Patterson.

The DraftKings algorithm hates Darrell Henderson. His $6,600 price tag just doesn’t jibe with his workhorse role. Henderson’s 80-percent (No. 2) Snap Share proves his involvement in the offense regardless of the situation for the Rams. This spot sets up especially nicely too against the Lions, who rank dead last in aFPA to running backs. The cherry on top here is the Rams’ hefty team total (33) that has been bet up by Vegas sharps since the market opened at 31. Expect a blowout in this one and Henderson to be a big reason why.

The “big dog” Derrick Henry is very much in play regardless of his slate-high $9,200 price tag. He leads the NFL in every imaginable running back category and seems unstoppable for opposing defenses. I’m only mentioning him here because his 14-percent projected ownership seems low given the matchup with the Chiefs (No. 31-ranked DVOA). Do not fade Henry.

D.J. Moore is going completely overlooked in Week 7 after a few disappointing weeks. Moore’s raw projection of 18 fantasy points (No. 6) doesn’t quite match up with his projected low ownership being outside the top 20. The time to buy is now since the public is annoyed with a couple of dud performances. 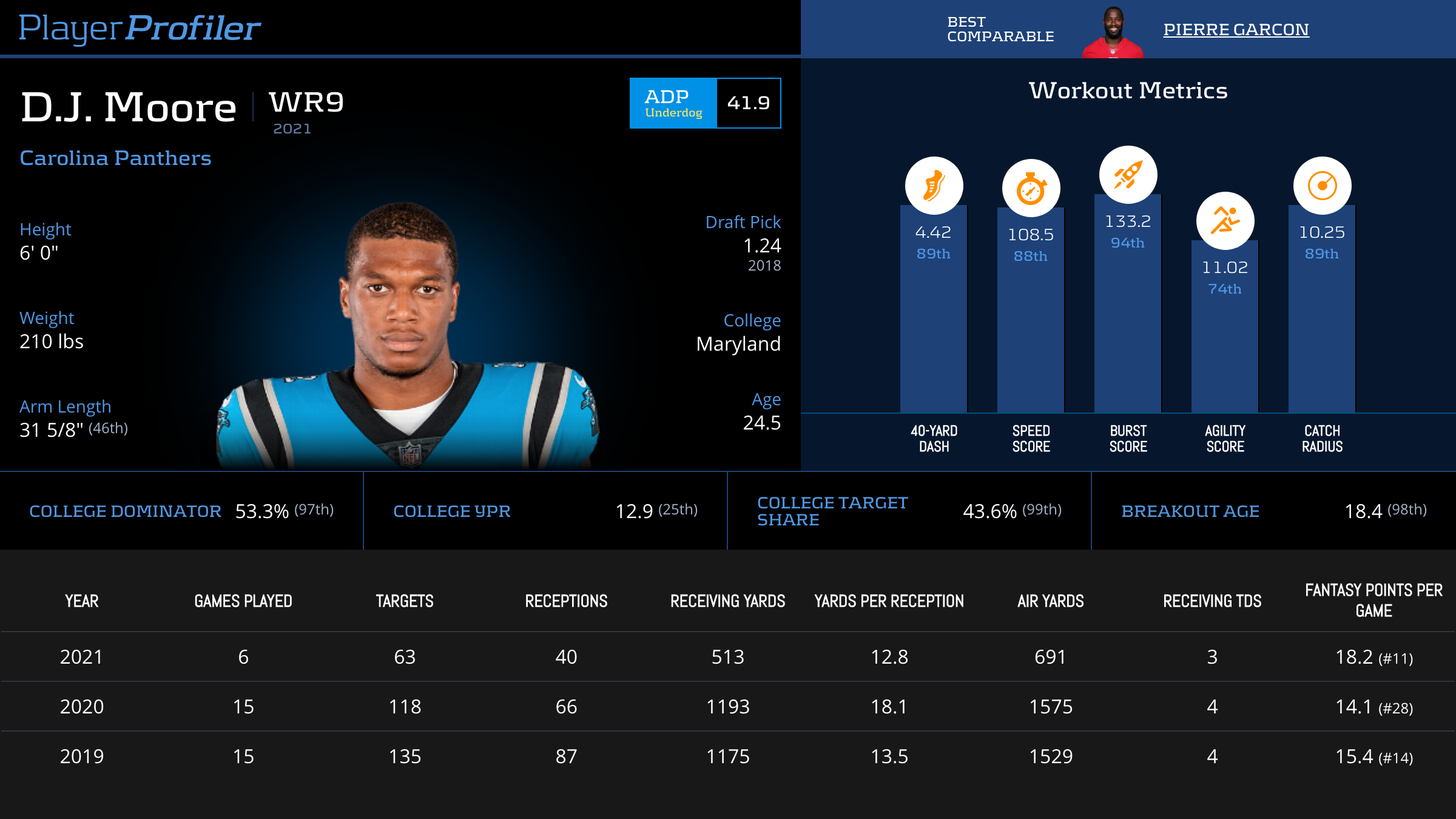 There are a few reasons to be optimistic in rostering Moore in Week 7. Regardless of his pedestrian Week 6 output of five catches for 73 yards, he still saw 13 Targets (Tied for No. 3) with 222 (No. 2) Air Yards. This season, Moore’s impressive 29.57-percent (No. 5) Target Share and 100-percent (No. 1) Route Participation should give fantasy gamers hope moving forward. If that’s not enough, the Giants are also allowing an average of 44 DKPt to opposing receivers (No 4).

While Davante Adams is seemingly good chalk once again, an interesting leverage play can be found in one Allen Lazard. While the love fest between Adams and Aaron Rodgers is no secret, there is opportunity for a player like Lazard to pop off for a good game. In Marquez Valdes-Scantling‘s absence, Lazard has seen a significant boost in playing time. Week 6 saw him matching Adams’ Snap Share (each with 85-percent) and Target Share (each with 23.8-percent). At just $4,200 and a projected ownership of 0.9-percent, the value and leverage in rostering Lazard makes sense for GPP. I particularly like the Rodgers/Adams/Lazard triple stack sans Washington runback. Washington ranks last in receptions and yards allowed to opposing receivers.

DeAndre Hopkins certainly deserves a mention given his team’s massive team total (32.25) against his former team. Hopkins has yet to put up a 100-yard game with a touchdown but that is well within his range of outcomes. Kyler Murray‘s proclivity to spread the ball around has rightfully scared off some fantasy gamers from paying up for Hopkins. However, he edges out his teammates with a 20.8-percent Target Share and also separates himself with his touchdown production. His six Total Touchdowns is twice as many as any other Cardinals receiver. In MME, experiment with a few iterations of a Cardinals double stack by including Hopkins with A.J. Green, Rondale Moore, Christian Kirk, or even newly signed tight end, Zach Ertz.

There are some stud tight ends on this week’s slate but I’m good to pay down at the position too. Zach Ertz is one such pay down option that is attention worthy. With Maxx Williams on the shelf with a knee injury, the Cardinals opted to trade for the veteran tight end to fill the position.

Ertz’s change of scenario could be revitalizing for his fantasy production (at least this week… sorry Podfather). In Philadelphia he was sharing snaps and targets with Dallas Goedert, but in Arizona there is no competition (from tight ends). There are definitely a lot of mouths to feed in this offense, but Ertz should see the field plenty in a game with a huge total. The Texans have the second-worst aFPA defense against tight ends. At $3,900, he’s at the very least a player to pepper into your MME.

Rostering Tyler Higbee gets you some serious leverage over a justifiably chalky Cooper Kupp and Darrell Henderson. While Higbee hasn’t had a slate-breaking game this season, he’s on the field a ton for the Rams. His 100-percent Snap Share in Week 6, for example, was Ricky Seals-Jones–esque. He’s inexpensive, always on the field and his team has a 33-point total in what should be a blowout. If that’s not enough to sway you, consider the fact that he also owns a 27-percent Red Zone Target Share.