Calvin Ridley has transformed into the Air Yards Value king over the course of the past two weeks. During this time, he has seen over 200 Air Yards and at least 12 targets in each game. He finished as the WR3 in Week 14 and the WR1 in Week 15. Somehow, despite this production, Ridley is not the highest priced receiver on the slate. Exploit this error by DraftKings and make Ridley a mainstay across all formats.

Marquise Brown has finally started to realize some Air Yards. After the sophomore wide receiver bottomed out posting zero fantasy points in Week 11, he has averaged 15.6 fantasy points from Week 12 onward. There have been two games during this time that he has seen at least 90 Air Yards. While he is projected to see a lot of coverage from James Bradberry this week, his price being under $6,000, makes him a worthy dart throw in tournaments.

Keelan Cole found himself in the same spot last week on the Air Yards Value List and woefully disappointed. He saw only 13 Air Yards and finished with 4.2 fantasy points. With the Jaguars turning back to Mike Glennon at quarterback, Cole’s production may continue to lag in fantasy. His best game that Glennon completed start to finish occurred in Week 12 when Cole finished with only 7.4 fantasy points despite seeing 118 Air Yards. Priced at only $3,500, he presents as an intriguing low priced option in all formats.

T.Y. Hilton‘s fountain of youth juice must have been slightly watered down prior to him consuming it before last week’s game. The 31-year old veteran finished as the WR41 on the week. Still, he scored double digit fantasy points for the fourth consecutive week and saw over 75 Air Yards with six targets. 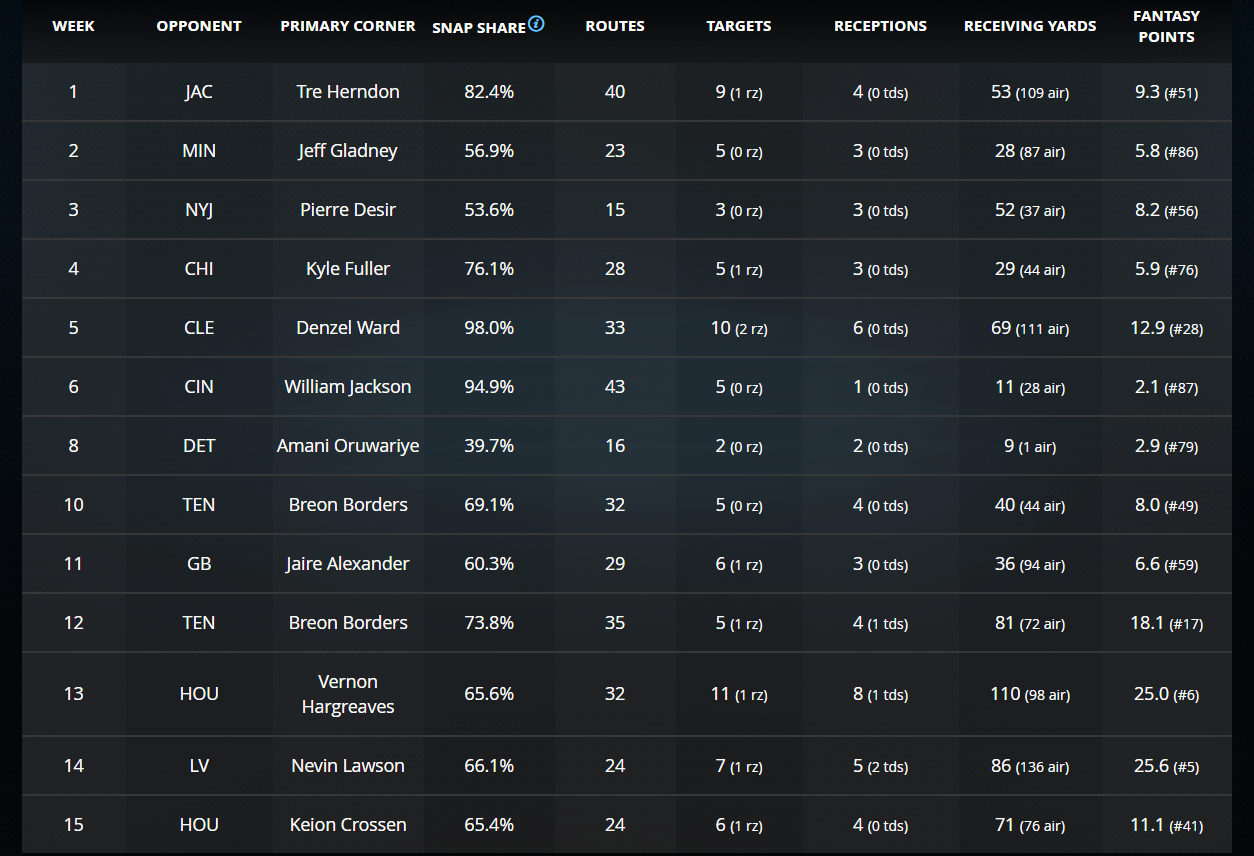 Hilton may not have enough juice again this week to overcome a tough matchup against Joe Haden and the Steelers secondary. However, his involvement in the Colts passing game makes him a salary saving option in cash formats.

Denzel Mims‘ opportunities on the Jets offense have dwindled lately. The rookie wide receiver is being out-targeted substantially by Jamison Crowder seeing only seven targets to Crowder’s 15 since Week 13 when both players have been active. Mims also only saw 15 Air Yards last week. However, he is $900 cheaper than Crowder and, for this reason, presents as a low cost option, albeit with a low ceiling and middling floor.

Darnell Mooney has yet to have the type of splash week that his 13.2 (No. 22) Average Target Distance suggests he is capable of. However, he has posted two consecutive double digit fantasy points outings and snagged two touchdowns over the past two weeks. 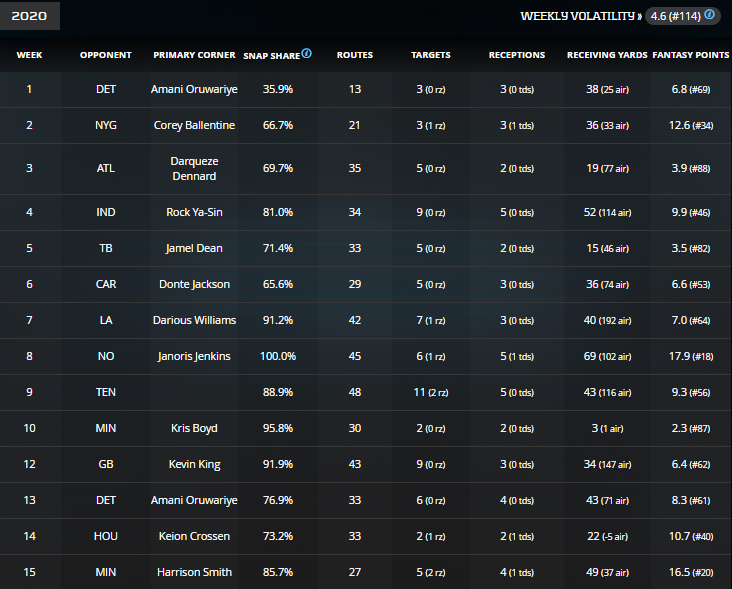 He is clearly Chicago’s secondary receiver behind Allen Robinson. Mooney is a recommended play across all formats. If he is able to snag a Deep Ball, he could very well be a slate winner.

Mike Williams is the west coast version of Marquez Valdes-Scantling. Or least he plays that role when he is healthy. Last week, Williams was a game time call due to a back injury and only saw two targets with 20 Air Yards. This week, he has avoided the injury report and appears to be healthy against a Denver secondary that can be exploited.  Save him for some of your tournament lineups.

Michael Gallup was out-targeted and out-gained in Air Yards by CeeDee Lamb last week, however Gallup remains the Dallas receiver to roster in daily fantasy.

DraftKings still hasn’t caught on to the fact that Gallup leads all Cowboys wide receivers in both targets and Air Yards over the past four weeks. Still priced cheaper than Amari Cooper and CeeDee Lamb, feel free to insert him into every lineup you have. 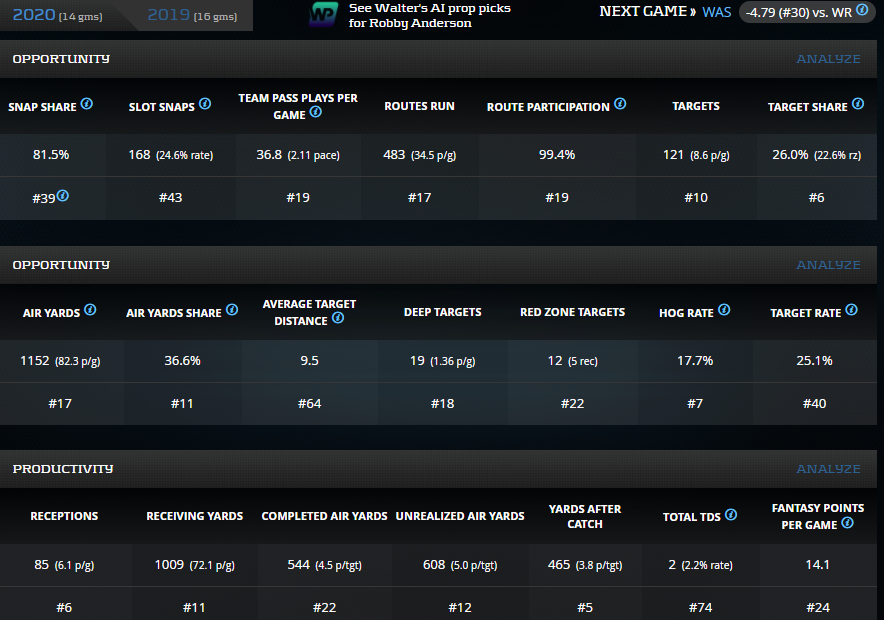 Granted he is coming off his worst fantasy game this season, posting only four fantasy points last week. However, he primarily saw coverage from Jaire Alexander, one of the best corners in the game. Couple this fact with Anderson’s  year to date production, and $5,500 seems like a discount that can only happen after Christmas. Anderson is the recommended play in all formats.

D.J. Chark‘s disappointing season continued with Gardner Minshew back behind center last week. Chark has failed to eclipse double digit fantasy points in five consecutive games. Regardless, he continues to see large quantities of Air Yards, averaging almost 100 per game during this same time period. This makes him worthy of some exposure in tournament lineups.

Darius Slayton had a double digit fantasy point outing last week for the first time since Week 10. He has now seen over 100 Air Yards in two consecutive weeks and appears to be reestablishing himself as part of the Giants offense.

With Daniel Jones expected back under center this week against the Ravens, Slayton will look to continue to reemerge as a fantasy producer. While he may be a sell in dynasty formats, he is a great tournament option this week.

On the off chance that Jeudy just needed some additional time for the ankle to get fully healthy he is worth a tournament dart throw. However, beware that his recent usage suggests a different trend for his fantasy potential.

Good luck to everyone in Week 16. May all your Air Yards be realized.