Entering Week 15, knowing who to start is imperative. All of our fantasy football assets are at our disposal. Last week, we suggested to pivot from Kyler Murray and Alvin Kamara. This week, quarterback streamers should add Drew Lock, while the “Running Backs Don’t Matter” crowd needs to beeline it to waivers for Gus Edwards.

We know that the biggest question you have every week is who to Flex, so we provide you a handful of players to target specifically for the week at the position. Stats don’t play favorites. For more takes, watch our weekly Top 10 Takeaways show:

Let’s use PlayerProfiler’s advanced stats, metrics, and analytics to unearth trends for fantasy football. Below are key statistics to know while following along:

Coming off his best game to date as a pro, Drew Lock rolls into a juicy matchup against Buffalo. As good as the Bills defense has been recently, they’ve allowed five passing touchdowns in their past two outings combined to Nick Mullens and Ben Roethlisberger, respectively. The unit fields a middle-of-the-pack 15th-best (5.5-percent) Pass DVOA, while the game’s implied 50-point total sit at the sixth-highest of the week. For his best part, Lock has managed a 6:2 TD:INT ratio in his past two outings, establishing strong synergy with Tim Patrick and K.J. Hamler along the way.

Mark Ingram has totaled six carries over the past two weeks, including zero last week. Meanwhile, Gus Edwards and J.K. Dobbins have split the backfield carries 24-14 in that span. That’s a 36.8-percent carry share for Edwards on a Ravens team averaging 32.6 (No. 2) Team Run Plays Per Game. We’d love to see his 33.3-percent (No. 64 among qualified running backs) Snap Share expand, but it’s clear he’s likely toting the rock when he’s on the field.

Dobbins totaled both green zone touches last week. However, that didn’t stop Edwards from rumbling for two touchdowns himself. Edwards fields a 4.7 (No. 9) True Yards Per Carry mark on the season, adding eight (No. 6) Breakaway Runs, showcasing his elusiveness. Dobbins or Edwards, who should you Flex? The answer is both, while Edwards is more widely available. The Jaguars, Baltimore’s opponent this week, allow the fourth-most fantasy points to opposing backs, while their rush defense is the eighth-worst in DVOA.

As of this writing, the statuses of DeVante Parker and Jakeem Grant are unknown. That said, Lynn Bowden totaled a season-high 76.7-percent Snap Share, 44 routes run, nine targets, seven receptions, and 82 yards. That was good for 15.4 (No. 25) fantasy points. His nine targets on 48 pass attempts converts to a 18.75-percent Target Share and a 20.4-percent Target Rate.

lynn bowden was destined to be an nfl wide receiver, not a gadget player.

The matchup this week is not great against the Patriots – they allow the fifth-fewest PPR fantasy points to receivers – but Bowden, with his 59.1-percent Slot Rate, should avoid Stephon Gilmore. All told, position eligibility as a back or receiver and standing in as Tua Tagovailoa‘s No. 1 receiver prop Bowden up to Flex territory. Still, monitor Parker and Grant throughout the week. 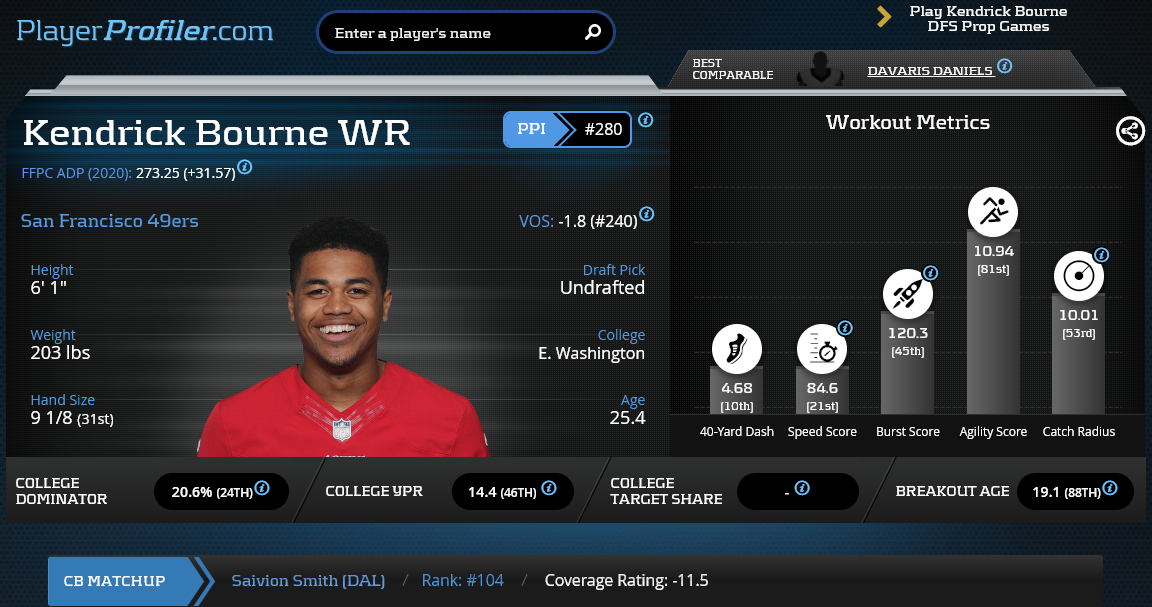 For the season, Bourne has an 85.5-percent (No. 53) Route Participation mark. The 49ers average 38.4 (No. 15) Team Pass Plays Per Game, acting as an extension of their run game, with Nick Mullens totaling a lowly 6.1 (No. 34) Air Yards per Attempt. Bourne is most appealing as a Flex in PPR formats, but those receptions still lead to yardage. Lock him in all formats.

As of this writing, Julio Jones‘ status this week is unknown, but we know Russell Gage has totaled 19 targets in the past two Jones-less games (Weeks 11 and 14). Gage has parlayed the opportunity into 12 receptions and 140 receiving yards. That’s good for two top-36 weekly finishes – he even threw for a touchdown! The Falcons head home this week for a matchup against the Buccaneers. The defense allows the 11th-most PPR fantasy points to receivers, while the matchup possesses the third-highest implied point total (50.5) of the week. Heading into an offseason of uncertainty, this may be Matt Ryan‘s swan song at home.

Laviska Shenault totaled just seven targets with Mike Glennon under center, but with Gardner Minshew back in the fold, he’s coming off an 11-target game. He converted the opportunity to six receptions, 49 receiving yards, and a No. 38 weekly finish. He totaled 110 Air Yards as well.

didn’t really play in) paired with an actually good NFL QB. Wheels up ?

Laviska Shenault is a BUY in dynasty, and is putting together a fine rookie campaign.

I’ll leave you with Shenault’s 36 yard reception from week 7, where you can get a taste of his elite YAC ability. pic.twitter.com/9mVhImJ52T

Although the Ravens defense fields the 11th-best Pass DVOA, the unit has allowed five receiving touchdowns over the past four games. A bet on Shenault is a bet on him scoring and he and Minshew moving in lockstep.

Since we’re recommending Drew Lock for the quarterback streaming community, let’s stack it up with K.J. Hamler. We’d love to see Hamler expand upon his 59.6-percent Snap Share and three targets from Week 14, but he’s no more than an all-or-nothing dart throw Flex – if you need upside. He’s coming off a 2-86-2 receiving line, with 90 Air Yards. As stated above, the Bills defense ranks middle of the pack in pass DVOA — 15th-best.

Tyron Johnson totaled a season-high 75.7-percent Snap Share, 36 routes run, and seven targets in the absence of Big Mike Williams. The former parlayed the opportunity into a 6-55-1 receiving line. That was good for 17.5 (No. 21) fantasy points. 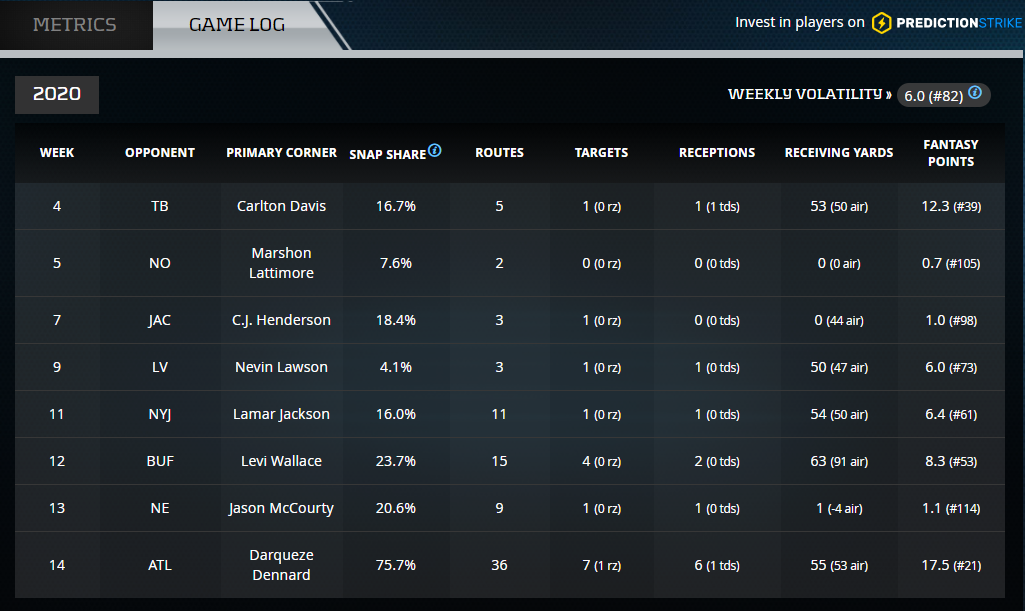 If Williams can’t suit up on a short week against the Raiders, Johnson steps into his role in a game with the highest implied point total (53) of the week. For perspective, Williams posted a 5-81 receiving line on seven targets in these teams’ first matchup. The Raiders also allow the 14th-most PPR fantasy points to receivers, while their pass DVOA rating is the 12th-worst.

A bet on Tyler Higbee this week is a bet on the matchup. The Jets allow the most PPR fantasy points to tight ends, allowing a touchdown in each of their past four outings — a total of six in that span. The Jets defense ranks last in Pass DVOA as well. The Rams average 37.8 (No. 16) Team Pass Plays Per Game, and Higbee possesses a 10.6-percent (No. 29) Target Share, but again, the matchup is what draws us toward him.

Cole Kmet has quietly commanded seven targets in consecutive games. He’s now a full-time player, too. Kmet has a top-8 weekly finish in one of his past two games, totaling nine receptions, 78 yards, and a touchdown in that span. His seven targets last week converts to a 21.2-percent Target Share.

Mitchell Trubisky is coming off a three-touchdown game. Next up: the Vikings, allowing the 15th-most fantasy points to quarterbacks. If Kmet’s Target Share holds up, we also love the matchup. The Vikings have allowed 80-plus yards or a touchdown to tight ends in three of their past four outings.