PlayerProfiler’s Player Popularity Index (PPI) tracks individual player profile page views over the past 30 days and ranks them accordingly. Each week, this article will highlight the five highest-ranked players and use our advanced stats and metrics to provide fantasy football insight on each. Following Sunday’s action and prior to Monday Night Football, the PPI pinpointed the following top-five trending players for Week 14: 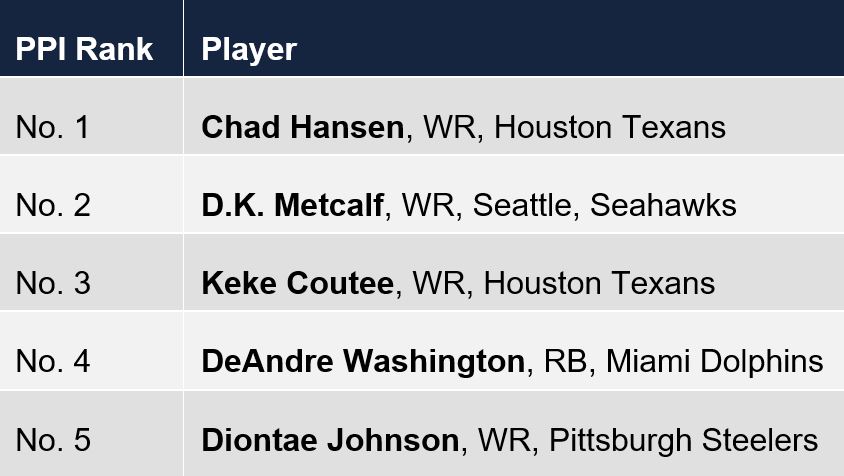 A week after making a splash in his first start since 2017, Chad Hansen led a depleted Texans pass-catching corps in receiving. Without Will Fuller (suspended), Brandin Cooks (foot/neck) and Randall Cobb (injured reserve, toe), Hansen and Keke Coutee were thrust into the limelight. Hansen caught all of his team-high seven targets for 56 yards and no touchdowns. It followed last week’s five catches for 101 yards against the Colts.

After a blowup game in Week 13 (8-141-0), Coutee came back to Earth but caught all three of his targets for 24 yards and a score. He saw two fewer targets than teammate Steven Mitchell, but Deshaun Watson looks his way in the red zone, where Coutee has earned five targets across the past three games.

Fantasy Implications: Hansen, unknown to the masses before last week, remains an intriguing waiver wire target for playoff-eligible teams. Given his consistent usage over the past two games, he looks locked into the tertiary role at the least. He also deserves consideration in deeper dynasty leagues, but faces an uncertain path to a meaningful future role. Coutee carries less upside in the short term, but plays a majority of his snaps out of the slot. His role is secure with Cobb out, but his Target Share fluctuation makes him harder to trust.

Key Metrics: After averaging 20.2 yards per reception in Week 13, Hansen’s YPR dropped to 8.0 with a long play of 15 yards. However, given that he faced a primary cornerback matchup against Kyle Fuller, he produced a solid game.

Metcalf Cements Himself as Mr. Popularity

Fantasy gamers love D.K. Metcalf. He’s now appeared in 7-of-9 PPI rankings articles this season. He kept up his torrid pace by posting a 6-61-1 line on eight targets against the Jets. His 1,180 receiving yards trail only the 1,250 put up by Travis Kelce, and his 10 TDs rank No. 5 in the league.

Metcalf ‘s score came against Jets rookie cornerback Bryce Hall on 2nd and goal inside the 5-yard line. He sold an inside move with precision footwork, then burned Hall on an end zone fade before catching a dime from Russell Wilson. Another week, another Metcalf highlight reel. To put the icing on the cake, he climbed into the stands and commandeered a video camera before pretending to film the action on the field.

Fantasy Implications: Metcalf’s rise to No. 1 in PlayerProfiler’s dynasty wide receiver rankings makes him a challenging dynasty acquisition. Fantasy managers may need to make any offer a “Godfather” offer at this point. In redraft, he projects to appear on league-winning squads in all formats.

Key Metrics: Showing his mettle not only in fantasy land but in how he helps the Seahawks win games, Metcalf ranks No. 1 among qualified receivers in Expected Points Added with a +78.2 mark. EPA measures the value of individual plays by calculating the expected points scored based on the down, distance, and field position situation at the start of a play and contrasting it with the situation at the end of the play.

For the second time in the past three games, DeAndre Washington saw the lion’s share of Miami’s carries. He again failed to do much with the workload. Despite Salvon Ahmed‘s success in backing up Myles Gaskin, Washington didn’t impress. In his two spot starts – in Week 12 vs. the Jets and Week 14 vs. Kansas City – he tallied 84 yards rushing on 26 attempts (3.2 yards per carry). His passing game work during that span doesn’t instill confidence either. He caught 4-of-9 passes for 28 yards.

The Dolphins placed Gaskin on the Reserve/COVID list after he tested positive for the virus. With Gaskin in jeopardy of missing multiple weeks and Ahmed’s availability uncertain due to a shoulder injury, Washington appears destined to draw another start in Week 15. Miami draws New England and then Las Vegas to close out the fantasy playoffs.

Fantasy Implications: Fantasy managers lacking better options should consider adding Washington in redraft leagues. But his underwhelming spot starts make him best left on the waiver wire unless the situation is desperate. A matchup against the Patriots offers a glimmer of hope for him to make an impact. New England just yielded a monster performance to Cam Akers (29 carries for 171 yards). Kenyan Drake (22-78-2) also enjoyed a solid outing recently.

Key Metrics: Washington has failed to score on all nine of his red zone carries this season.

Diontae Johnson has dropped eight passes prior to Week 14’s game, the most among receivers this season. He dropped two more in the first half against Buffalo and found himself watching from the sidelines. Coach Mike Tomlin made good on his promise to remove from the game any player who couldn’t “make routine plays routinely.” He still earned seven targets, catching four for 40 yards. It marked the first time since a Week 8 dud against Baltimore, and only the fourth time this season, that Johnson failed to see 10 or more targets.

Drops are a concern for any receiver, but they’re amplified for Johnson given the abundance of talent in the Steelers receiving corps. It’s doubtful he falls out of favor with Tomlin, but a bounce back performance in Week 15 would help.

Fantasy Implications: Johnson needs to rebound in Week 15 and draws a beatable Bengals secondary, so roll him out in the fantasy semis. In Week 10 against Cincinnati, he caught six passes for 116 yards and score, finishing as the WR5. However, his overall lack of efficiency puts a damper on his dynasty outlook. His role appears safe for now, with the Steelers having signed him through the 2022 season.