Maximizing your fantasy points per salary dollar is the key to cashing in DFS. If you want to afford the best cash plays on the slate, dumpster diving for underpriced value plays is the way to go. With multiple injuries already shaking up some projected workloads, there is plenty of value on the DFS main slate. Here are the best DFS Flex values for Week 3 based on PlayerProfiler’s advanced stats, metrics, and analytics.

A late-week scratch for Zack Moss has thrust Devin Singletary into a near free square RB role. Moss had commanded a 41.2 percent (No. 35 among qualified running backs) Opportunity Share, siphoning 20 touches from this backfield through two weeks, including a whopping nine (No. 10) Red Zone Touches. The Bills won’t put the dusty T.J. Yeldon into Moss’ role, meaning Singletary will be absorbing most of those opportunities.

The game environment also looks to be a smash. Josh Allen is an MVP candidate through two weeks. After his first career 300-yard passing game in Week 1, he followed up with 417 yards and four scores against the Miami Dolphins. The Bills have let him air it out and the entire offense has benefitted. The Rams aren’t a pushover defense, but their offense has looked efficient and capable of putting up monster point totals.

Zack Moss vs. Devin Singletary: Who is the better RB for fantasy football on the Buffalo Bills? pic.twitter.com/kLRPIuPkB8

The real way to attack the Rams is on the ground. They rank No. 27 in Defensive Rushing DVOA and have allowed Miles Sanders and Ezekiel Elliott to rack up 258 scrimmage yards and three touchdowns in two weeks. Singletary has shown a solid receiving floor with 10 (No. 6) targets through two weeks, so we can project him for workhorse touches in a soft matchup. At $4900 on DK, he’s a solid cash game option. 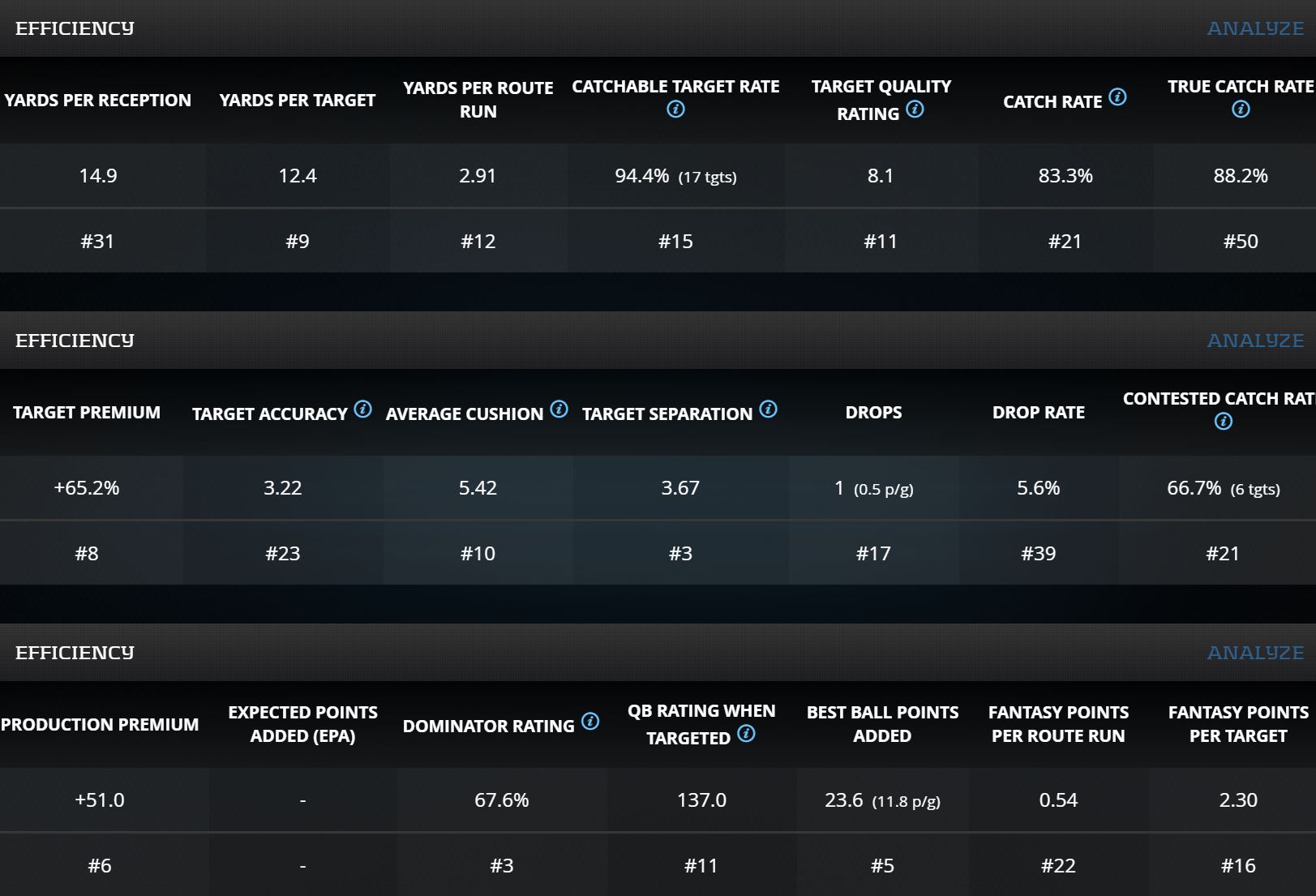 After racking up back-to-back 100-yard games, Anderson takes on the Los Angeles Chargers. They did an excellent job of shutting down the Chiefs offense for three quarters, so we can’t expect an efficient game from Panthers receivers. What we can expect is shadow coverage with Casey Hayward on Moore and Chris Harris on Anderson. Neither Chargers CB is particularly fast, and we saw Tyreek Hill separate from Harris and his 4.53 (44th-percentile) speed last week for a long score. Given that both Anderson and Moore run sub-4.45, we should see some big plays this week.

In two straight weeks, we’ve seen the Panthers fall behind and air the ball out in the second half. The Chargers had life on offense with Justin Herbert running the show, so we should expect a similar game flow. Pencil the efficient Anderson in for another 7-10 targets and play him at $5200 on DK and $6100 on FD.

With Sterling Shepard landing on IR, Darius Slayton is the clear alpha receiver in the Giants offense. He already showed what he can do with that role in Week 1, where he rang up 102 yards and two touchdowns on an elite Pittsburgh secondary. He struggled against an equally talented Chicago secondary in Week 2, but the usage was still there. His 34.8-percent (No. 18) Air Yards Share is double the team’s next closest pass catcher; Sterling Shepard at 16.9-percent (No. 60). Slayton will continue to thrive in this role with his 4.39 (95th-percentile) speed.

His matchup is also insanely good given the San Francisco’s recent injuries. Their pass rush is now nonexistent without their two starting defensive ends, which will give Daniel Jones plenty of time to find Slayton deep. They are also down Richard Sherman, leaving Emmanuel Moseley, K’Waun Williams, and Akhello Witherspoon behind. The former two were undrafted and the latter has been benched on multiple occasions since 2019.

Slayton is an underpriced smash play against this banged-up defense. Expect double-digit targets given New York’s offensive injuries in this soft matchup. He should be a high-floor, high-ceiling lock in cash lineups this week.

The Cowboys continue to be an easy DFS target given their soft defense and aggressive offense. They currently run 2.98 offensive plays per minute, which is easily the fastest Pace of Play in the PlayerProfiler database. These elevated play totals lead to explosive shootouts and plenty of opportunities to score fantasy points. That will continue this week when they take on the Seahawks, who are officially letting Russell Wilson cook. This matchup has the highest total on the slate at 56.5, so getting in on this game will be necessary, albeit chalky.

The best exposure comes in the form of CeeDee Lamb. He’s the cheapest Cowboys WR on DK at $5400, but he is set up the best. Lamb currently leads the NFL in slot snaps with 109 and has already surpassed Michael Gallup, with 15 (No. 23) targets to Gallup’s 10 (No. 51). The Seahawks have given up massive games to slot receivers Russell Gage and Julian Edelman in back-to-back weeks. Lamb will feast in this matchup.