Few times in a season does a player emerge that’s truly worthy of a high priority pickup. The league-winning move may be one that doesn’t require any FAAB dollars to be spent. A key to winning consistently in fantasy football is using advanced stats and metrics to identify potential breakouts before they happen. Stashing players that would become hot adds with a big game before others have a chance to acquire them is a winning strategy in any format. Of course, this is much easier said than done.

When it comes to picking up, and sometimes starting, players that no one else in the fantasy community wants, pinpointing hits with any consistent success is inherently difficult. Entering any given week, these widely available players have enough obstacles to overcome on the path to consistent fantasy relevancy to keep the general public off of them. Still, this early in the season, there’s plenty of free meat to pick from the proverbial fantasy football bone. These are the perfect players to stash for owners who find themselves with a free roster spot after an IR stash or two.

James Robinson can be classified as a success after starting in Week 1 as an undrafted free agent and handling 100-percent of Jacksonville’s RB carries. Though he only generated 10.0 fantasy points and should’ve been on your roster well in advance of Week 1’s kickoff.

Van Jefferson‘s production suffered from rotating with Josh Reynolds in LA’s No. 3 receiver role. The Rams starting the year with a dramatic drop in Pace of Play (2.09 plays per minute of offensive possession) compared to last season’s 2.38 (No. 3) mark didn’t help. Though it’s worth noting that Jefferson did haul in Jared Goff’s only Deep Ball Attempt for a 31-yard gain.

We were on the right track in targeting Lions and Bucs WRs. We just chose the wrong ones, going with Marvin Hall and Justin Watson over Quintez Cephus and Scott Miller. With Kenny Golladay and Chris Godwin set to miss Week 2, we can run it back with Watson and Hall, while also adding Cephus and/or Miller to the bench stash rotation.

After drawing praise from Tom Brady near the end of the summer, Miller caught five of six targets for 73 yards against the Saints, tying him with O.J. Howard for second on the team behind a healthy Godwin. Miller looks like a fast Wes Welker, and his next game comes against a Panthers team that just gave up 34 points to the Raiders.

Cephus, a fifth-round rookie, drew 10 targets in his NFL debut. Though he only caught three for 43 yards, he did unexpectedly rank No. 9 among qualified wide receivers with 129 Air Yards. He’s among the only rookie receivers who look to have an established role entering Week 2, which makes him stash-worthy.

Logan Thomas should have been the call at TE over Dan Arnold, and was even mentioned in the Arnold blurb. The Cardinals split TE snaps between Arnold and Maxx Williams in Week 1, but Williams has already been ruled out for this week. Arnold shouldn’t threaten the Snap Shares of the Arizona wide receiver group, but can be stashed for one more week in TE-premium formats.

Frank Gore was the trendy (?) waiver pickup after the Jets put Le’Veon Bell on IR. However, Josh Adams played 13 snaps, which was only one fewer than Gore. He registered two targets, two catches, two carries and a touchdown in the team’s final offensive drive.

Gore is the nominal starter while Bell is out, with Kalen Ballage likely to see some (unnecessary) work. Adams offers more bell cow upside than both, which is what we aim for with our bench stash RBs. His Best Comparable Player is Javorius Allen, in a good way. Lamical Perine, the original Bobcaster himself, being ready to contribute would further muddle this already uncertain situation, but Adams is the play for now. Though we’re not looking to start any of these guys against the 49ers this week unless absolutely desperate.

With Phillip Lindsay‘s turf toe injury potentially costing him a few weeks, we know it’s wheels up for Melvin Gordon. Royce Freeman only played six Week 1 snaps, not making it onto the stat sheet until Lindsay got hurt. Though Freeman logged a carry and caught a pass on those six snaps in the same fourth-quarter drive. It’s worth reminding everyone that Freeman out-targeted Lindsay 50-48 in 2019 despite trailing him in both Snap Share and Opportunity Share on the year. Gordon, despite a 64.4-percent (No. 13) Snap Share, only drew three (No. 25) targets in the opener, though he did catch all three.

In a year where teams are giving their star players the bubble wrap treatment more than usual, it’s easy to see Freeman working his way into a more meaningful role than any fantasy gamers expect. Especially given that Gordon owns the No. 14-ranked Injury Probability among RBs on PlayerProfiler. Freeman, with his league-winning profile, needs to be stashed on deeper benches .

Among the more underreported Week 1 stories was Todd Gurley, presumed bellcow back in Atlanta, only logging a 48.0-percent (No. 23) Snap Share. Despite this, he did register a 67.9-percent (No. 11) Opportunity Share. Though it was disappointing that he couldn’t produce more given his 96.4 (No. 10) Run Blocking Efficiency rating. Brian Hill and Ito Smith both logged 25.3-percent (No. 63) Snap Shares behind him. Smith recorded one four-yard carry and caught all three of his targets, though he only managed two receiving yards. Hill had three carries for 12 yards and caught both of his targets for eight.

The time to acquire Tre’Quan Smith was days ago, before Michael Thomas was ruled out for Week 2. If he’s still available in your league, you’re running out of time to strike. The dreaded high-ankle sprain (or, as we call it around these parts, the High-Ankle Fucked) killed the momentum of many a fantasy season in 2019, including Smith himself, though his overall efficiency remained high on only 25 (No. 120) targets.

Even when Thomas returns, there’s no telling whether he’ll return to his usual form. We at the Underworld have waxed poetic about Smith for years, waiting for him to come into an opportunity like this. He now spends the next few weeks facing off against the Raiders, Packers and Lions. You know what to do.

Before the 2020 season began, it was opined that Trent Taylor could finish third on the 49ers in receptions behind George Kittle and Deebo Samuel. With both players out, that prediction can still come to fruition. Though it was discouraging to see Taylor manage a measly 36.2-percent (No. 101) Snap Share in a game where both Samuel and rookie first-round pick Brandon Aiyuk were out. On the plus side, he tied with four other players for the team lead with five targets, though he only caught two for seven yards. Still, we don’t care about the low counting stats as much as we care about his 23.8-percent (No. 6) Hog Rate and three (No. 2) Red Zone Targets.

Taylor is an ostensibly better version of Wes Welker and is best deployed in the slot. Though he only played 12 (No. 43) Slot Snaps in Week 1, he led all 49ers receivers in that regard and his 57.1-percent Slot Rate ranked No. 25. Aiyuk’s looming debut and Mohamed Sanu‘s addition may throw things into flux, but Taylor shouldn’t be forgotten about with San Francisco preparing to take on the Jets in Week 2.

It’s likely the Monmouth University alumni blood in me, but I’m not forgetting about Chris Hogan, and neither should you. Yes, the Jets are an on-paper dumpster fire entering Week 2. That said, both Jamison Crowder and Denzel Mims are out and Breshad Perriman is not operating at 100-percent. Hogan only caught one of four targets for zero yards in his Jets debut, but that doesn’t matter as much as the projected opportunity spike he’s set to enjoy. He already logged a 100.0-percent Snap Share in his first game with the team, and is now set to become an active member of a passing game that will spend a good amount of time in comeback mode.

In four of the previous six seasons, Hogan has recorded a positive Target Premium. This metric measures the percentage of additional Fantasy Points per Target that a wide receiver or tight end generates over and above the other pass receivers on his team. This metric is useful when examining the impact of a quarterback upgrade on a wide receiver’s future production. Especially when that player is switching teams. It was the argument to not forget about him last year when he played for the Panthers, though a knee injury derailed his lone campaign in Carolina. Though he shouldn’t be started in any but the deepest of leagues, it’s not out of the question for him to produce usable numbers against a 49ers defense that just lost Richard Sherman to IR.

George Kittle is expected to only miss one game with a knee injury suffered in Week 1. Knee injuries can be tricky though, plus teams have been overly cautious with their star players. Jordan Reed only managed a 15.5-percent (No. 61) Snap Share due to Kittle’s presence, and only played five (No. 30) Slot Snaps in Week 1. Though his 55.6-percent Slot Rate ranked No. 2 among all tight ends and only behind Trent Taylor among 49ers pass-catchers. His 22.2-percent Hog Rate also ranked No. 2 among all tight ends, meaning he was already a passing game focal point when on the field. Reed is not dead yet; he’s worth a stash and a possible spot start against the Jets. Especially in TE-premium formats.

Jimmy Graham may be old and washed, but he saw a tremendous amount of opportunity in his Bears debut and next faces a traditionally TE-friendly Giants defense. That alone is enough to earn a recommendation from me. Plus, early returns indicate that he’s not dead just yet. 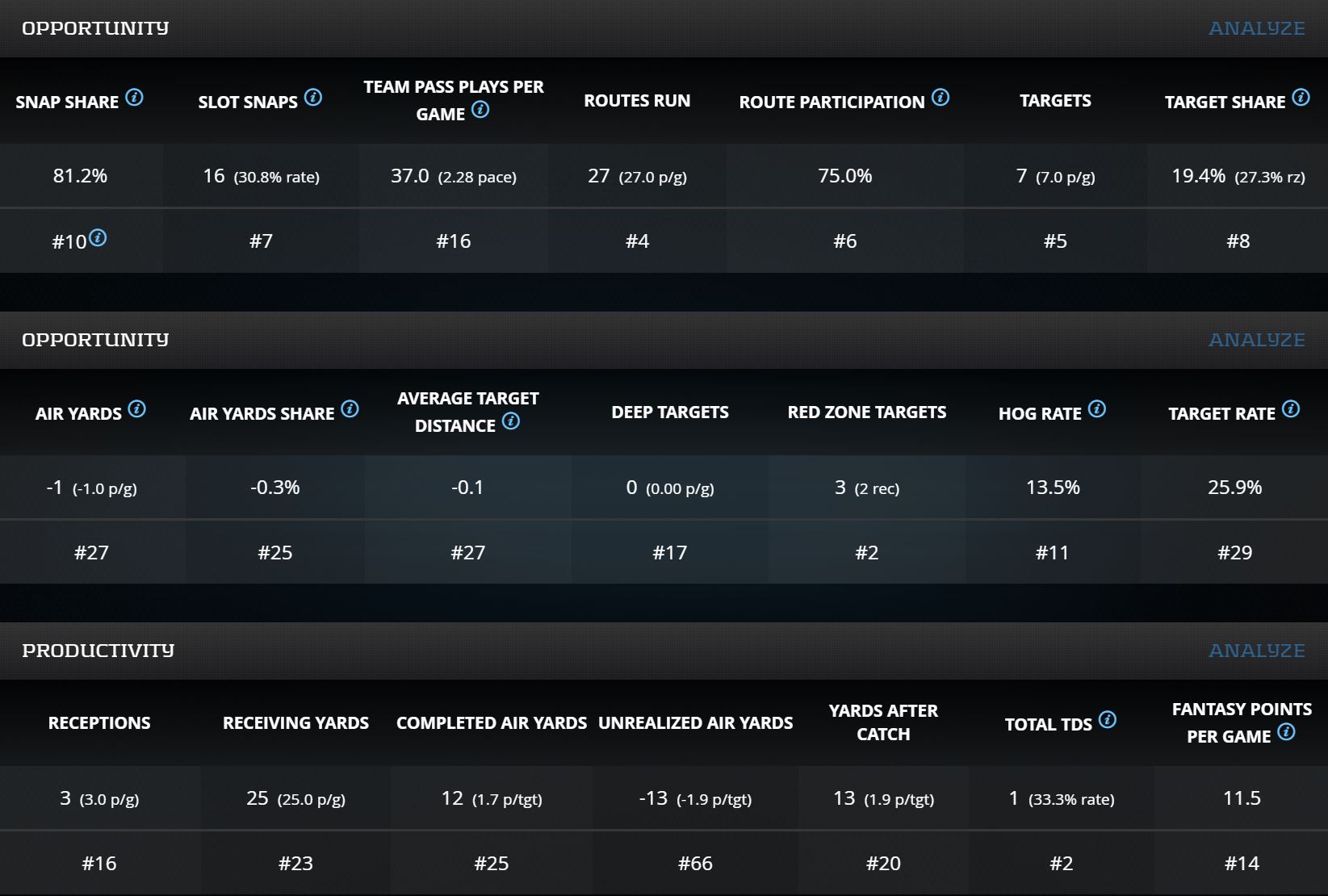 With Jack Doyle out for at least Week 2 and Trey Burton still parked on IR, and with Blake Jarwin set to miss the rest of the season with a torn ACL, Mo Alie-Cox and Dalton Schultz are opportunity-based stashes.

Former fourth-round draft pick Schultz is an intriguing enough athlete and did record a 66.7-percent (No. 26) Snap Share with 16 (No. 7) Slot Snaps and a 36.4-percent (No. 5) Slot Rate. It’s just hard to see him cutting much more into Dallas’ WR opportunity than Jarwin would have, which makes him a wait-and-see stash until proven otherwise.