The hyper-efficient A.J. Brown headlined a list of players tweeted by Evan Silva ranking the 2019 rookie wide receiver class in order of Yards Per Pass Route. Scrolling down, it seemed that the talented receivers were towards the top and the busts were near the bottom. Naturally, I became curious about which efficiency metrics are the most predictive in determining a wide receiver’s success in his second season. Today, we experiment with advanced stats and metrics to identify any correlation between year one efficiency and year two production.

For this case study, we’ll use the 2017 and 2018 wide receiver classes. These classes are fresh in everyone’s mind and will be a large enough sample to confirm a correlation. Using the Playerprofiler Data Analysis Tool, I uploaded their Yards Per Pass Route, Targets, Air Yards Per Game, Yards After Catch Per Reception, and Fantasy Points Per Game. Points on a per-game basis allow injuries to have much less of an effect on the data. To filter out the undrafted free agents and non-factors, players with less than 100 pass routes ran were removed from the list. With anything less, there isn’t a large enough sample size to give Player X’s efficiency metrics any weight. There were 32 players who logged at least 100 routes ran in their rookie year.

Below is a chart showing the correlation between the metrics mentioned before. Surprisingly, targets were the most sticky in terms of year two production with a correlation value of 0.554. The only metric chosen that was opportunity-based instead of efficiency-based was the number of targets. Bummer, but on second thought not really.

While targets are a measure of opportunity, they also measure skill. It takes talent to earn volume early in a receiver’s career. In terms of future success, it makes sense for targets to be predictive. Receivers who demand targets in their rookie year are special players. Among the sample, four of the top five receivers in rookie targets have been hits at the next level. This list includes Cooper Kupp, Calvin Ridley, Courtland Sutton, Keelan Cole, and D.J. Moore. Below are the top 10 receivers in rookie year targets from 2017 to 2018.

The correlation in rookie targets to sophomore production is great, but doesn’t do much in giving us information at the top end. Of the top 10 in targets, four underproduced in year two. What separates Cole, Antonio Callaway, Marquez Valdes-Scantling, and Zay Jones from the elite producers? Yards Per Pass Route. Aside from Sutton, the receivers on this list with less than 2.0 Yards Per Pass Route underproduced in their second seasons. Filtering out any receiver who didn’t eclipse the 50 target mark in year one, the correlation between Yards Per Pass Route and Fantasy Points Per Game increased from 0.246 to 0.587, establishing a clear connection past the 50 target threshold.

Using this information, we now have a leg up over our dynasty league mates. Following the Yards Per Pass Route among receivers earning the prerequisite targets allows us to read tomorrow’s newspaper. Below is a chart showing the 2019 rookie receivers in terms of Yards Per Pass Route. Each player saw at least 50 targets.

At first glance, A.J. Brown jumps off the page with 3.46 Yards Per Pass Route. Not only is this No. 1 among rookie wideouts from 2017 to 2019, but it was also good enough for No. 1 in the league last year. Brown was hyper-efficient in his rookie year, and the data points to him being a stud in his sophomore season. This is valuable information, but already largely known. Upon further examination, the data suggests this crop of receivers is oozing with talent. Brown, Hunter Renfrow, Terry McLaurin, Deebo Samuel, Marquise Brown, and D.K. Metcalf are top ten in Yards Per Pass Route among rookie receivers since 2017. They’re in a tier with studs such as Moore, JuJu Smith-Schuster, and Cooper Kupp. At the top, the 2019 crop of rookie receivers are must-buys in dynasty. Below are the top 10 rookie receivers in Yards Per Pass Route from 2017-2020: 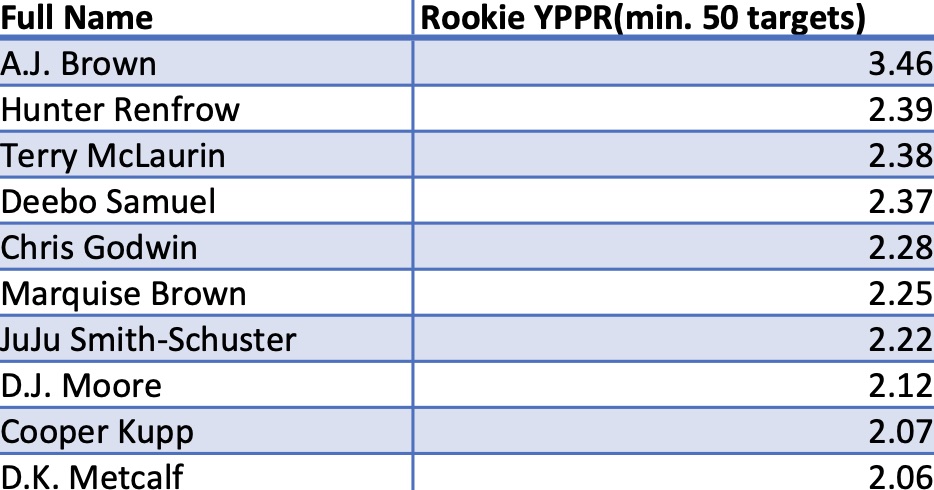 With this data, it’s easy to identify Renfrow as a sneaky buy in dynasty. He was second in the class in Yards Per Pass Route only to Brown. In addition to his efficiency, he earned 71 targets. From day one, he earned opportunities and was efficient on the field. There’s not much more we can ask. The Raiders did add talent to their receiving corps with Henry Ruggs, Lynn Bowden, and Bryan Edwards, but Renfrow will still see his share of the targets in year two. It’s easy to see him becoming a producer in the slot, having already logged 66.8-percent of his snaps there in 2019. With all of this in mind, he is still disrespected in dynasty leagues going as the WR80 in FFPC start up drafts. At that price, the juice is definitely worth the squeeze.

Not only can this information tell us who to target, but it can give us warning signs on who to fade in this class. Andy Isabella’s 3.1 Yards Per Pass Route looks much less impressive in the context of his 13 rookie season targets. The Cardinals ran 4-5 wide receiver sets a league-high 31.9-percent of the time and he still couldn’t earn looks in a weak receiver room, seeing fewer targets than the likes of Damiere Byrd, KeeSean Johnson, and Pharoh Cooper. In the context of the data, he becomes an easy fade despite the hype around his prospect profile.

On the surface, targets are the most predictive metric in terms of rookie to sophomore production. A player who is talented enough to earn targets in the NFL as a young rookie will pan out for the most part. This information was helpful, but it’s the Yards Per Pass Route within the context of targets that takes the cake. If a receiver can not only earn opportunity in year one but perform efficiently, they become clear candidates to exceed expectations in year two.