Devonta Smith cooled off last week posting only 10.1 fantasy points against Marshon Lattimore and the Saints. However, Smith has averaged 14.5 Fantasy Points Per Game over the past four weeks. Up against another top corner in James Bradberry, Smith may find it difficult to post more the 20 FPPG like he did in Weeks 9 and 10, however his floor remains high based on his share of Air Yards in the Eagles offense. He is a recommended play in all formats.

Last week, we hoped D.J. Moore would be unlocked by Cam Newton, and the results were satisfactory. Moore saw seven targets, hauling in five receptions for 50 yards and a touchdown. He also saw 60 Air Yards and should continue to be Cam’s primary target at the wide receiver position.

D.J. Moore is the eighth-most targeted WR versus single-man coverage (30%).

The Panthers play the Dolphins this weekend — the No. 1 man-coverage defense (48%).

Moore is going to get some big-play chances this weekend.

Leading the Panthers in Air Yards on the season, Moore makes for a great play in all formats considering his success against man coverage.

Last week, we crammed Quez Watkins into this spot over some other wide receivers with the idea that Dallas Goedert would miss the game, opening up some more opportunity for Watkins. Unfortunately for Watkins, Goedert was active and Quez only saw one target and six Air Yards. No such list-making gymnastics is needed this week as Watkins is truly number ten on the value list. 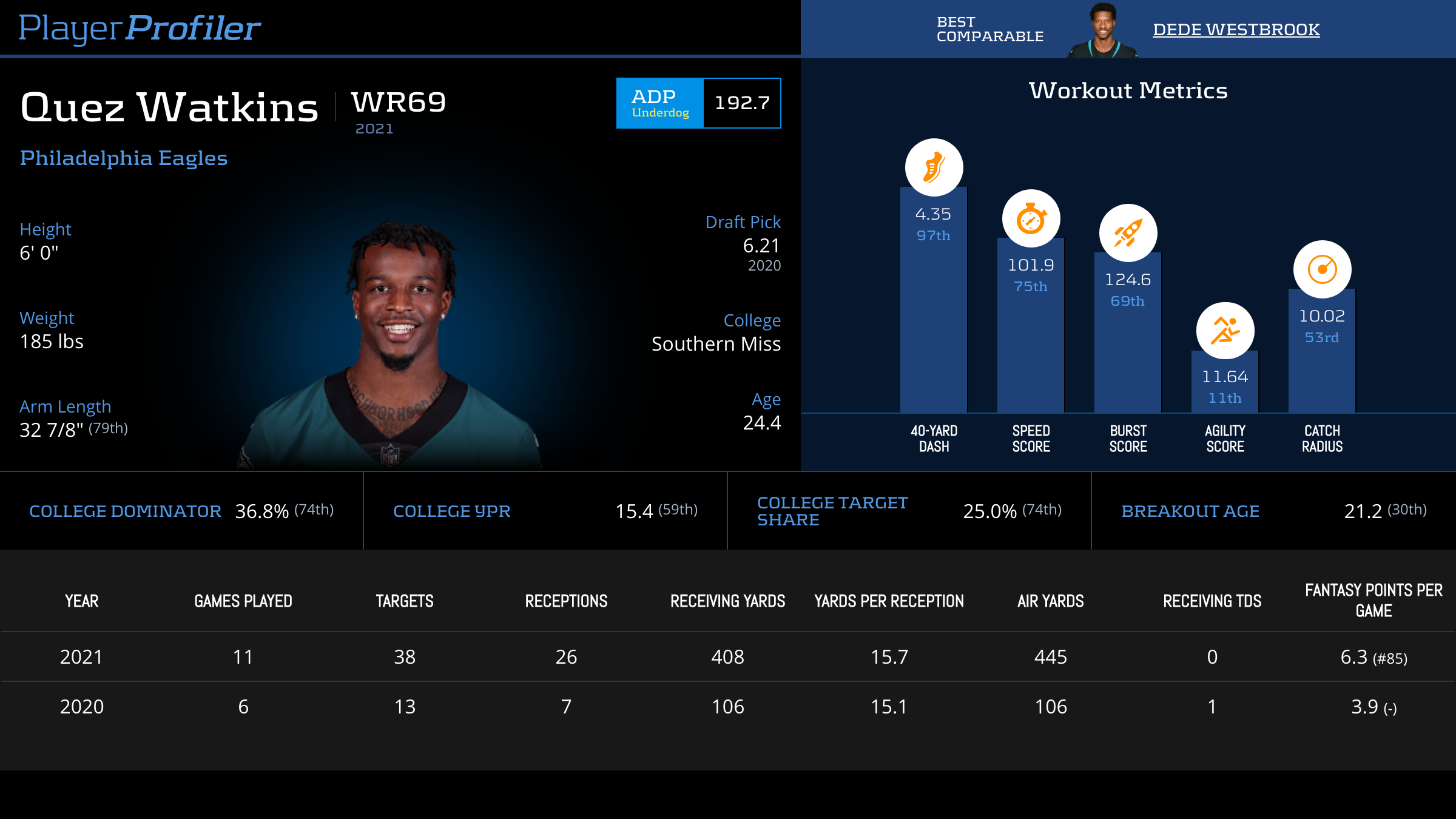 With only one double digit fantasy point finish through 11 games, Watkins floor is on a shaky foundation and should be a tournament dart throw only.

Zach Pascal and the rest of the Colts receiving corps didn’t have to do much last week with Jonathan Taylor melting faces and breaking the slate. As such, he only saw three Air Yards and failed to register any receiving related fantasy points.

Pascal’s presence on this list is still in large part due to a 142 Air Yards performance in week eight. While that type of usage is obviously possible for Pascal, especially against the Bucs, is remains unlikely for week 12 and he is best reserved as a tournament dart throw.

The quintessential cash play Tim Patrick finally got his cash this week scoring a three year, $30 million contract extension with the Broncos. As someone who routinely discusses how Patrick is undervalued, I was very happy for the former undrafted free agent. Patrick has averaged 4.6 targets per game and 61 Air Yards since Week 8. He has averaged 10.8 Fantasy Points Per Game during this time and should be a staple in cash lineups.

Robby Anderson has averaged only 18.8 Air Yards per game through the past four weeks. He and D.J. Moore have flipped roles compared to how they were used in the Panthers offense last season. With few downfield plays likely to come his way in Week 12, Anderson is best reserved as a cash play only with the assumption that Cam Newton keeps the Panthers offense moving efficiently.

Nelson Agholor snagged the Patriots lone passing touchdown last week in addition to five receptions and 40 receiving yards. His role changed a bit last week as he was utilized closer to the line of scrimmage amassing only 22 Air Yards.  His 13.5 (No. 12) Average Target Distance suggests that he will likely revert to the Patriots downfield target, making him a volatile tournament play only against an exploitable Titans secondary.

Tee Higgins remains a prime regression candidate. However, his Week 11 role provided some legitimate red flags to whether we finally see that regression occur. Higgins saw a season low 15 Air Yards last week. He was outproduced by both Tyler Boyd and Ja’Marr Chase in that category as well as fantasy points.

The hope in Week 12 is that Higgins usage regresses to his season average of 83.5 Air Yards per game, so that his fantasy production can regress to a level reflective of such opportunity. That’s a lot of regression. I’m still playing Higgins in all formats with some slight unease.

Jakobi Meyers has been a mainstay on the Air Yards Value list all season. He offers a consistent target floor, seeing no less than four targets in any game this season. With a 9.4 (No. 68) Average Target Distance, Meyers usually converts easy catches for close to double digit fantasy points, but offers little upside. He should be a cash game staple in Week 12.

Marquez Valdes-Scantling went boom last week to the tune of four receptions 123 yards and a touchdown. This is what can happen when you have a league-leading 19.1 Average Target Distance.

If Marquez Valdes-Scantling is on waivers still, scoop him

Facing the Rams in Week 12 in what has the potential to be a shootout, MVS can look to haul in some more long passes and should be a player that you have exposure to in tournament lineups.

Corey Davis took a backseat to Elijah Moore (DK: $5,600) last week, being out-targeted 11-7 by the red hot rookie. However, despite seeing four fewer targets than Moore, Davis outgained the rookie in Air Yards, posting 102 compared to Moore’s 101. Davis and Moore are essentially the 1A and 1B in the Jets passing attack. Davis missed Thursday practice with a groin injury, so his health is a situation to monitor. If he is active in Week 12, he is a great value play in all formats. If he is forced to miss the game, pivoting to Moore may be worth it despite his being priced at $800 more than Davis.

Courtland Sutton‘s vanishing act since Jerry Jeudy‘s return is outright alarming. In games that Jeudy has not played in this season, Sutton has averaged 146 Air Yards. In the games that Jeudy has played, that average plummets to 43 Air Yards. He has been outgained in Air Yards the past two games by both Tim Patrick and Jeudy. Sutton is a tournament dart throw this week.

Good luck to everyone in Week 12. May all your Air Yards be realized.