The NFL season is a few months away. Voluntary OTA’s have begun so it’s only fitting that we divulge into some bold predictions for the 2022 NFL season. When making these bold predictions, a fantasy gamer has to take into account if it’s a plausible outcome. For example, saying Marlon Mack will finish as an RB1 in 2022 is an extremely bold take but the probability of that happening is slim to none. While doing some research, I’ve formulated five predictions that are not only bold, but have a reasonable probability of coming true in 2022.

This is a very spicy take. Clyde Edwards-Helaire has soured all fantasy managers mouths over the past two seasons. Drafted ahead of the dynasty RB1 Jonathan Taylor in 2020, Edwards-Helaire has not lived up to the sky-high expectations over the past two seasons. Finishing as the RB22 and RB46 is not the elite production fantasy managers were expecting in the Chiefs high-scoring offense. With that being said, the 2022 season is shaping up to be a “get right” spot for CEH.

Tyreek Hill is no longer with Kansas City and is leaving behind 159 targets from 2021. As a result, Edwards-Helaire’s usage in the passing game will likely increase. Darrell Williams also did not re-sign with the Chiefs. Instead, the Chiefs brought in Ronald Jones who is allergic to catching passes. This bodes well for Edwards-Helaire who figures to be the primary pass-catching/third-down back. With the scoring opportunities and increased pass-catching utilization, Edwards-Helaire could finish as an RB1. 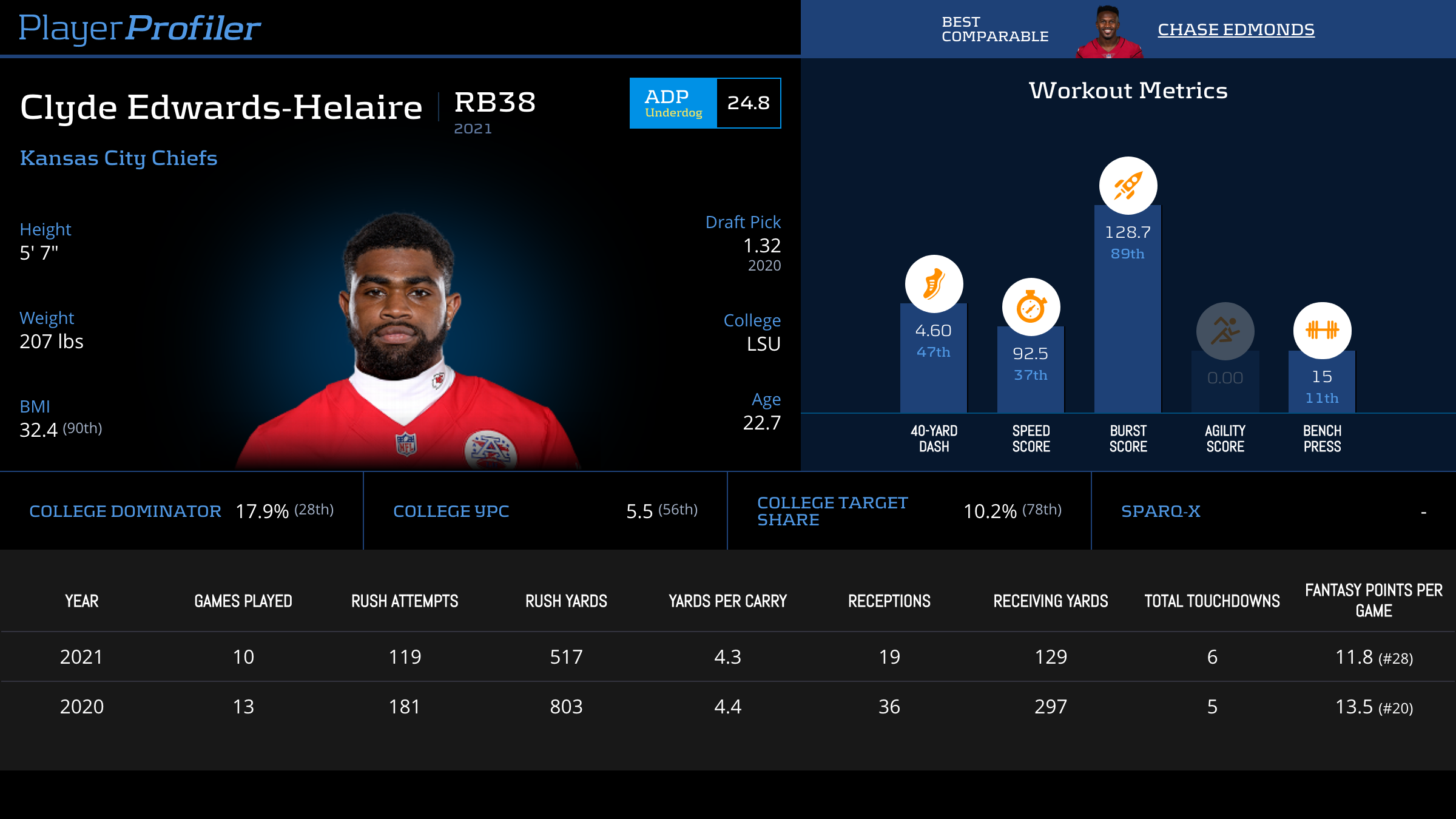 While this one doesn’t seem as “bold” considering two of the three are virtually a lock for a 1,000-yard campaign, this achievement has only happened five times in NFL history. The 2008 Arizona Cardinals were the last team to achieve this feat. Tyler Boyd finished with 824 yards last season but already has two 1,000-yard campaigns in his career. The Bengals beefed up the offensive line this offseason with key additions of La’el Collins, Ted Karras, and Alex Cappa. This will leave more time in the pocket for Burrow to pass. We should see the Bengals pass more this season with an improved offensive line, which bodes well for all the receivers. All three of the Bengals wide receivers are very talented and will be fantasy gold this season. My prediction is all three of them finish with 1,000 or more receiving yards in 2022.

Mike Williams finishes as a top-5 wide receiver in 2022

Williams got off to an exceptional start at the beginning of the 2021 season. During Weeks 1-6, Williams was the WR4 in PPR formats and went for 30+ fantasy points in two of the six games. Using the Player Profiler advanced metrics, Williams was No. 5-among wide receivers in Total Route Wins, No. 16 in Expected Points Added (EPA), No. 13 in in yards per reception, and ranked No. 20 in Yards Per Route Run. The efficiency metrics is where Williams could improve. However, the production metrics show us the ceiling for Williams. Williams ranked No. 11 in receiving yards, No. 14 in yards after the catch, No. 17 in Unrealized Air Yards, No. 10 in total touchdowns for wide receivers, and was No. 13 in Fantasy Points Per Game amongst wideouts.

The question has never been about talent for Williams. With Williams, it’s always been about his health and staying on the field. He’s a no-nonsense receiver that takes big hits and puts his body on the line. If Williams stays on the field and demands a high target-share from Justin Herbert, he has top-5 upside even with Keenan Allen and Austin Ekeler on the field. The Chargers are in arguably the most competitive division. For this reason, they will be in many shootouts this season.

Jalen Hurts finishes as the QB1 this season

Hurts is another Konami code quarterback who provides the rushing upside that allows a high floor for fantasy football. Pure pocket passers don’t offer much on the ground. The QB’s who don’t provide a lot of fantasy production with their legs need a lot of passing volume to make up for it. Hurts can both run and pass.  Hurts was the QB2 overall during Weeks 1-12 only behind Josh Allen. This showed a glimpse of his massive potential and upside.

Keep in mind, he wasn’t the greatest passer last year either, yet finished as a QB1 despite all this. While he is still raw as a passer, there is room for improvement especially since the Eagles traded for elite wide receiver A.J. Brown on draft night. This will give Hurts a true alpha wideout. By extension, it will improve Hurts’ passing numbers and touchdown upside. Most fantasy gamers don’t know Hurts performed better as a passer than Allen before the Bills acquired Stefon Diggs. A true alpha WR is a quarterback’s best friend.  Hurts will provide a high-floor due to his rushing ability, but we already knew this.  Unlocking his true overall upside will be to improve his passing numbers, and Brown will help him get there.

Saquon Barkley Finishes as a Top-5 Running Back

It seems like it’s been centuries since Saquon Barkley has produced like an elite running back in the NFL. The last few seasons have been plagued by injuries. When he has played, the inefficiencies and poor offense squandered any fantasy potential he had. There is reason to believe in a bounce-back season though for Barkley. His current ADP is too low. With Brian DaBoll coming over from Buffalo, Barkley will get more work in the passing game. That’s been the case during training camp thus far.

The Giants also improved their offensive line. This will help Barkley overcome any inefficiencies he had the two seasons prior. The only major concern for Barkley is how good the Giants will be and how many touchdown opportunities will be there. Barkley is being drafted right outside the top-12 running backs right now according to ADP, but he has the potential to have a top-5 season in 2022.