As a Patriots fan, I am particularly ecstatic about this matchup. Both teams are electric, and a New England win means top-dog status in the AFC. Without further ado, let’s get into what the Patriots and the Bills have in store for us.

Yes, Mac Jones walked into the best situation of the first round rookie quarterbacks. It’s irrefutable, however, that he’s been the best performer of the five. He’s put on a show of poise and accuracy, with a 7.9 (N0. 7 among qualified quarterbacks) Accuracy Rating and a 63.2-percent (No. 1) Pressured Completion Percentage. He’s getting better with every passing week. Jones has also been fantasy viable as of late, with three games of 15 or more fantasy points since Week 7. The Bills pass defense is elite, which will limit his upside and likely make him a weekly QB2. 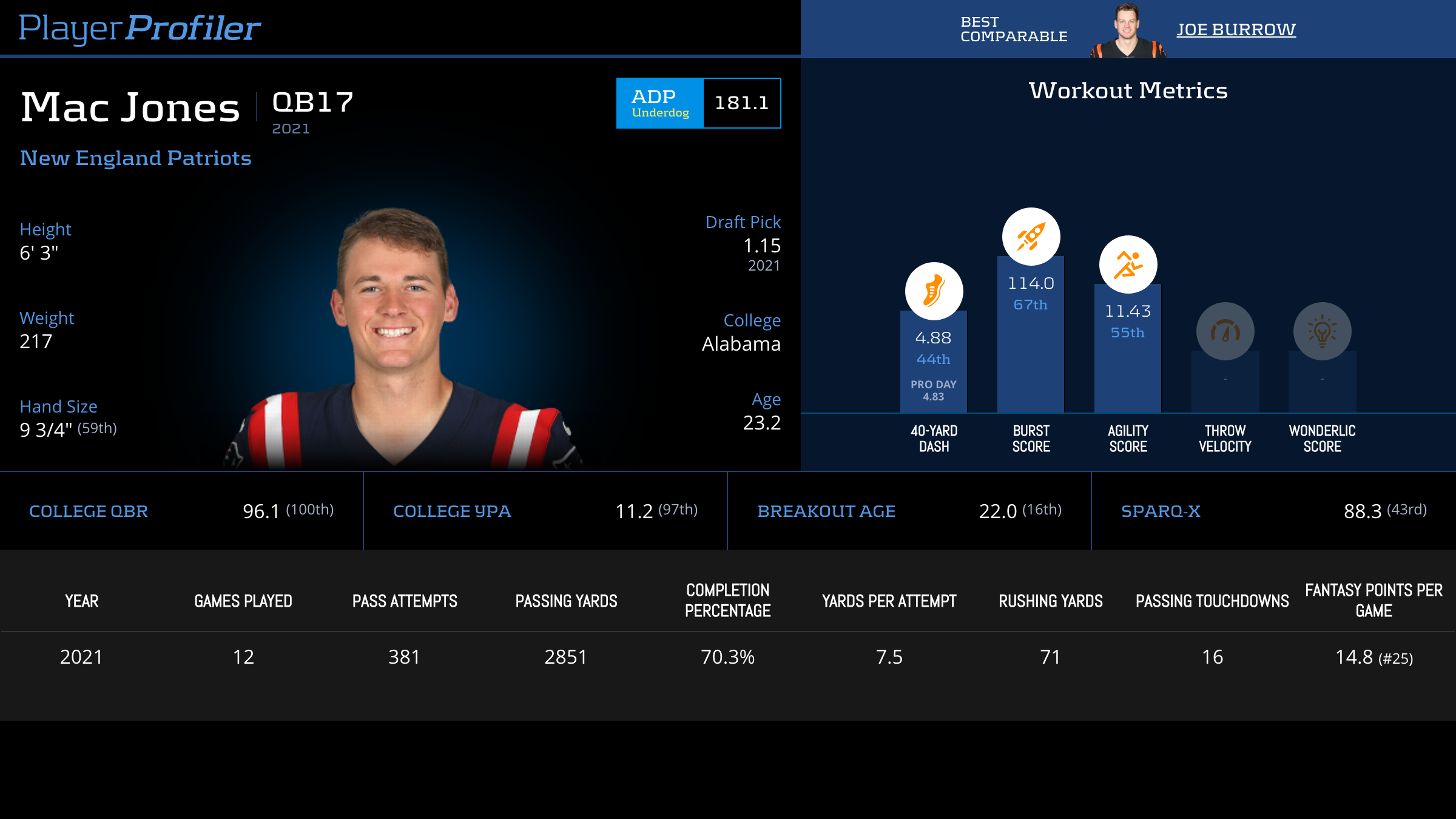 The Beli-tricks are back again, as Damien Harris and Rhamondre Stevenson now appear to be in a near 50/50 timeshare. Over the past two weeks, Stevenson has out-produced Harris on the ground and in the air and has earned an equal carry total. Because of this, Harris’s upside is greatly lowered and Stevenson is bumped up to a low-upside flex play. The good news is that Buffalo’s rush defense is a weak chain in the link.

Jakobi Meyers and The Bourne Ultimatum

Jakobi Meyers has been the team’s number one target, with a 23.8-percent (No. 20) Target Share. However, he’s struggled to consistently score fantasy points. He’s struggling to produce 50-plus receiving yards weekly and has only found the endzone once. Meyers could have his work cut out for him against No. 12-ranked CB Taron Johnson. Unexpectedly, Kendrick Bourne has been the best receiver in New England. He is constantly making big plays with his legs, with 305 (No. 11) Yards After Catch. He’s producing without a significant Target Share because of unreal efficiency, leading the league with 2.74 (No. 1) Fantasy Points per Target. Both WR’s are weekly WR3/flex plays, with Bourne having massive upside.

As is true with many tight ends, Hunter Henry and Jonnu Smith are irrelevant if they don’t score a touchdown. Neither are target hogs, but Smith has been used more as a blocking tight end while Henry has been the receiver. Henry has been usable because of his touchdown streak and his seasonal +27.0-percent (No. 5) Target Premium. Both players have been unreliable and now face a tough Bills defense, making it best to stay away in fantasy.

Josh Allen and A Surprise Running Back

Josh Allen has been lighting up the field this season, leading the league with 24.5 (No. 1) Fantasy Points per Game. With the lack of a run game, he throws 37.2 (No. 5) pass attempts and 6.7 (No. 3) Red Zone Attempts per Game. The gunslinger is also averaging an impressive 53.8-percent (No. 2) Deep Ball Completion Percentage on 56 (No. 6) Deep Balls. Simply put, he’s a playmaker. The problem is he is also facing an elite defense. Still, he’s a locked in QB1. 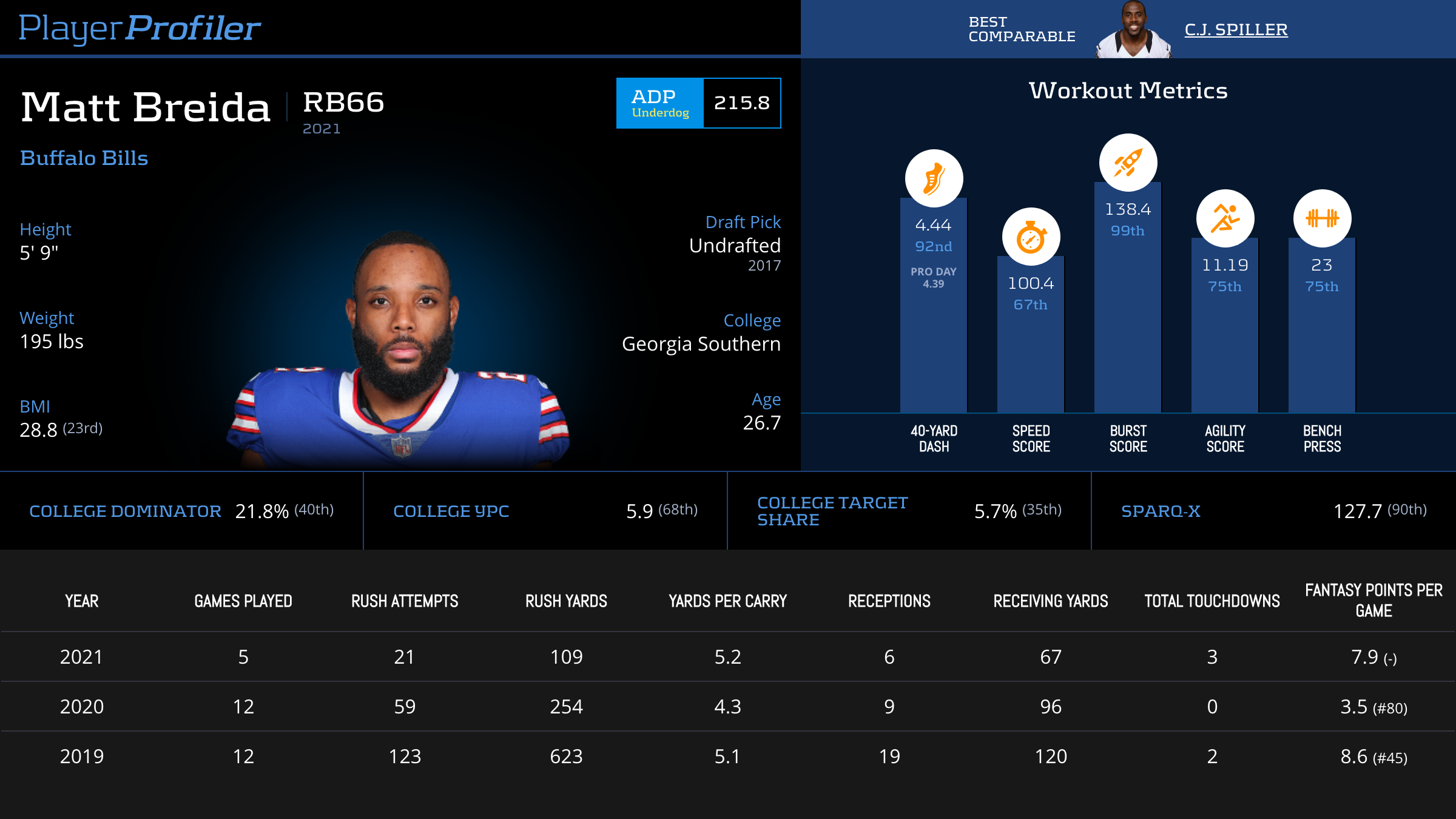 Buffalo running backs are avoidable on all fronts at this point. Zack Moss was a healthy scratch last week, and now Matt Breida and Devin Singletary are left to split to workload. Breida has scored 3 total touchdowns in three games, and the fact that he has taken over Moss’s receiving and goal line role makes him the usable option going forward. He has finished with at least 13 fantasy points twice in three games, while Stink-letary has hit that mark once all season. With the Patriots rush defense looking beatable at best, Breida becomes a flex play.

Stefon Diggs and A New WR2

The squeaky wheel got the grease. Stefon Diggs has scored a touchdown in 5 of the last 6 games, and is now averaging 17.6 (No. 6) Fantasy Points per Game. The team’s WR1 got his swagger back. His hot streak is in danger of ending tonight with a matchup against No. 7-ranked CB J.C. Jackson. Mr. INT is lock-down, giving up 1 (No. 48) touchdowns. Diggs is still playable, but has limited upside.

Cole Beasley has been unmasked as the true WR2 in Buffalo, out-targeting and out-producing Emmanuel Sanders since Week 6. The slot-man is earning a 27.9-percent (No. 17 ) Target Rate and has become a viable fantasy streamer. Going against No. 57-ranked CB Myles Bryant, this week feels like a Beasley week.

Finally, Dawson Knox is the new red zone threat (more like a promise, at this point). He’s compiled 7 (No. 1) touchdowns and 11 (No. 8) Red Zone Targets. He’s a weekly streamer, and possesses strong upside this week. Bill Belichick likes to take away a team’s number one option, meaning Knox could sneak under the radar and see a high target/high production outing.

I’ll make it clear right now. There is definitely bias baked into my selection of the Patriots to cover their +3 point spread. I’m taking New England straight up, which means I’m in favor of any line with them getting points. The team is rolling, the defense is ferocious, and the offense keeps getting better. The Bills have looked elite at points, but lately their offense has been sluggish and their defense lackluster. This is going to be a classic out-coaching, as the Patriots waltz into Buffalo and steal a win.

The point total is set at 41 points. There’s no bias needed for this one, as this total is far too low. Both team’s have elite defenses and efficient offenses. In these situations, we tend to like the over. Both offenses have the firepower to score against elite defenses, and both defenses have been known to struggle at times. I am rolling with the over.

As a bonus, I’ll throw in that I love Kendrick Bourne‘s over 31.5 receiving yards prop. If you follow me on Twitter, you’ll know that I’ve been taking his Vegas line every week, and it’s payed out far more often than it hasn’t. I’d take his line all the way up to 37.5 receiving yards if it moves.