Welcome everyone to this week’s GPP QB WR stacks article. The season marches onto Week 15 as our seasonal leagues move to playoff mode. Hopefully you’re still alive in those leagues, but if not, we’ve got plenty of hot daily fantasy action ahead. In this piece, we dig into the advanced stats and metrics here at PlayerProfiler to identify high upside combinations of QBs and WRs from the same NFL team to play in daily fantasy football tournaments. We look to balance the highest projections with low popularity in order to capture leverage on the field by gaining points where our competitors miss them.

This last week was another low scoring week in DFS. As bad as it feels while watching on Sunday, that does give those of us looking for under-played leverage points our best shot at taking down tournaments. Our QB plays from last week were not nearly as under the radar as hoped. In large field tournaments, Dak Prescott and Justin Herbert were above 10-percent, among the top 3 most played. Patrick Mahomes came in around 8-percent.

Herbert played great finishing with almost 25 DK points that potentially could have been more had this game been a bit more competitive. Herbert finished 25 yards short of the 300 Passing Yard bonus despite being over 200 at half. Mike Williams caught all six of his targets, but three other pass catchers found the end zone. The leading receiver for the Chargers this week was Josh Palmer who we noted was in play for Chargers double stacks even with an active Williams.

Prescott got steamed throughout the week, but the accompanying receiver did not form consensus. CeeDee Lamb, Amari Cooper, and Michael Gallup were all popular this week with Cooper putting up the best day. The Cowboys led all day and had a defensive touchdown, always a nightmare when stacking the O. Dak finished with 12 and Gallup 11 at 8-percent rostered.

Finally, our most contrarian stack last week ended up being our Chiefs leverage stack with Mahomes and Tyreek Hill. Similarly to the Cowboys, a defensive touchdown and positive game script throughout kept the volume down. The thesis here was play for ceiling, but we didn’t get that this week. Mahomes had 20 and Hill 11.

One of the first steps in my process for breaking down a slate involves assessing the Vegas lines for all the games. Since Vegas is very smart, the games that project to be higher scoring tend to be, which is good for fantasy. Since the field is quite smart, those games also tend to be the most popular for stacking. This week lacks any marquee high scoring games. Not a single game on the main slate has a total above 50. Most teams with an implied team total above 25 are projected to blow out their opponent which, as we’ve seen this year, can lead to volatile fantasy results.

This is all to say there doesn’t appear to be a chalk game or stack to avoid at this point. With the Chiefs, Chargers, and Buccaneers off the slate, we’re missing some of our favorite options but still have plenty to choose from at the high end with some interesting budget options popping as well.

For our first stack, we head to Buffalo where injuries are the biggest talking point. Josh Allen was reportedly in a walking boot after the game last week. He was limited on Wednesday, but any activity bodes well for him playing on Sunday. He’s been excellent this year leading the league in fantasy points. The underlying metrics line up here with 89 (No. 3) Red Zone Attempts, 62 (No. 4) Deep Ball Attempts, and 4190 (No. 2) Air Yards. That prolific volume can support high end fantasy finishes before even considering his rushing which ranks top 3 in Carries and Yards. That’s critical if we’re worried the foot injury may limit him slightly this week. 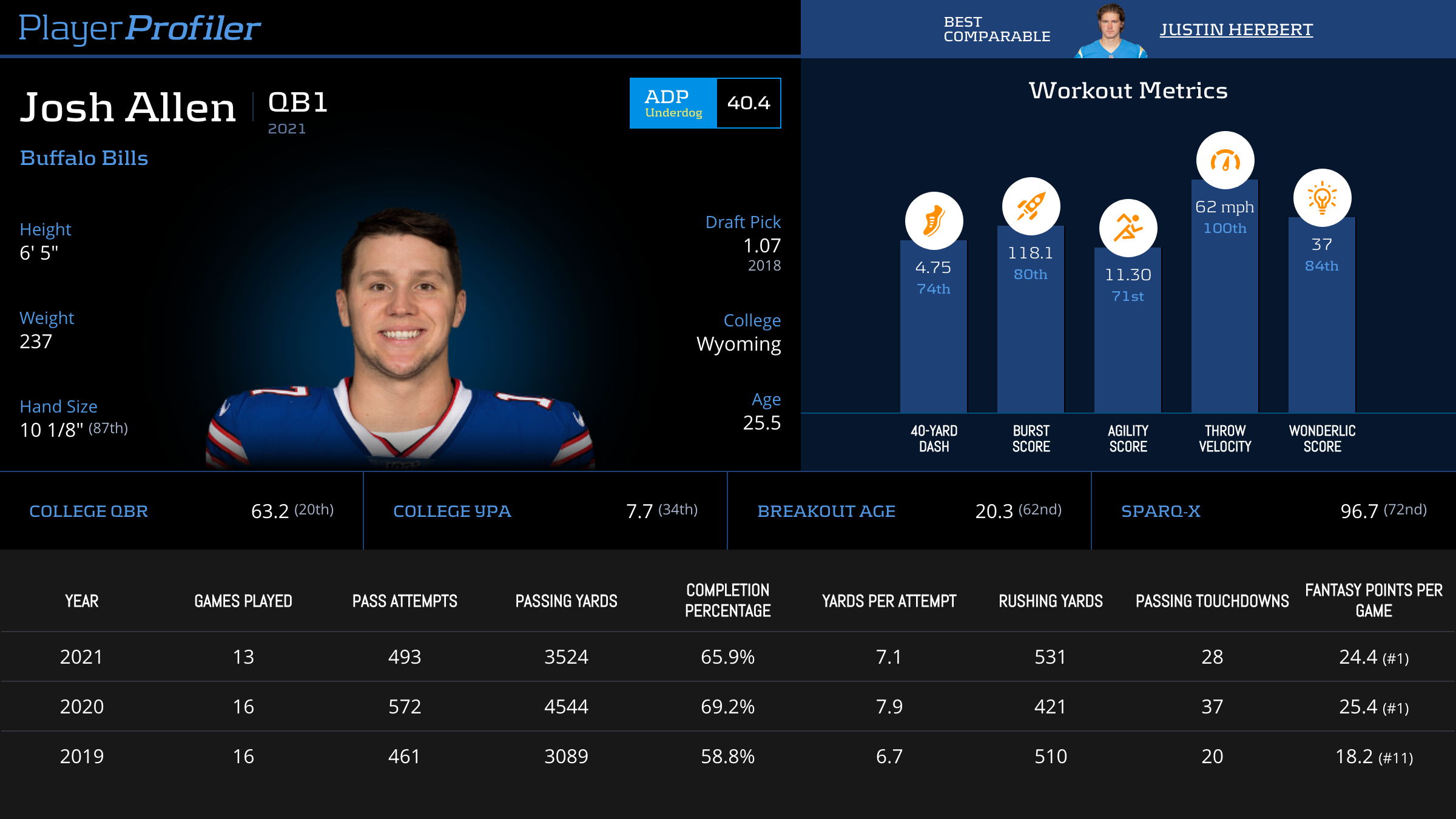 What makes this play intriguing specifically this week is the leverage opportunity in playing a banged-up Allen and an underplayed Stefon Diggs. It’s fair to say Diggs has underwhelmed preseason expectations this year. Excitement is down, but let’s not overreact. With 1,402 (No. 3) Air Yards on 121 (No. 8) Targets, Diggs still plays an elite role in this offense. The field, however, will be focused on jamming Gabriel Davis who’s filling in for the injured Emmanuel Sanders. That popularity should detract from Diggs who will continue to operate in the WR1 role for a high-powered offense.

Here we have another opportunity to take advantage of stacking an overlooked piece on a top offense. Kyler Murray returned to action last week and didn’t miss a beat against the ferocious Rams defense. He gets a much softer opponent this week against the Lions. As 13 point favorites and going without lead WR DeAndre Hopkins, Murray does not project to be among the most popular QB plays this week.

a role change with Hopkins OUT.

The concern with projected blowouts is reduction in volume. Murray hasn’t been succeeding through volume this year though. His 32 Attempts per Game rank outside the top half of the league. He’s been superb with his limited attempts. His 8.7 Yards per Attempt lead the league, his 8.0 Accuracy Rating ranks second, and his 0.69 Fantasy Points per Dropback rank third. With a banged-up running game, the volume might even increase this week while there’s no worry the efficiency could struggle.

In the wake of the Hopkins injury news, fantasy gamers are salivating to play the young, exciting playmakers on the Cardinals offense. We’re seeing on/off stats with Rondale Moore and Christian Kirk everywhere. The steady constant in this offense though has been A.J. Green. There’s no excitement there which again presents a leverage opportunity in our lineups. Green and Kirk have earned similar Target Shares to this point (17.3-percent, No. 55). Green’s targets are simply more valuable. His 13.1 (No. 17) Average Target Distance is deeper than Kirk’s 11.4 (No. 39). Green also gets more looks in the red zone with 11 vs 6. It may not be optimal in a real life football sense, but Green is going to be heavily involved in filling in for Hopkins. Take the cost savings and roster share discount with Green this week.

Finally, we have our budget stack of the week. In a week where the top QB plays project to be the most popular, one way to get structural leverage on the field is flipping your build with a cheap QB. A potentially overlooked option is Teddy Bridgewater. Vegas doesn’t love this game as a shootout, but the Broncos are favored over the Bengals in what should be a back-and-forth affair. We saw a similar situation play out last week with the 49ers-Bengals game.

Teddy has quietly changed his playstyle from the super conservative approach in Carolina. He’s chucking it this year. 8.3 Air Yards per Attempt rank tenth while 52 Deep Ball Attempts rank twelfth. At only $5.5k, one or two deep shots connecting can be enough to return value.

If the thesis behind the play is looking to hit on some deep attempts in what likely isn’t the highest scoring game, then we have to play the WR most likely to reel in said deep balls. That would be Courtland Sutton who is now all the way down to $4.9k on DraftKings. The raw target volume hasn’t been there. His 18.9-percent Target Share ranks No. 41. However, these are the targets we want to chase in GPPs. 15.5 Average Target Distance ranks No. 6 in the league, as does his 23 Deep Targets. The connection has been faulty this year, evidenced by 664 (No. 6) Unrealized Air Yards, but we know Sutton has been a good player over his career and these are among the most volatile targets over a small sample. This stack provides significant upside for the dollar.