Welcome to Week 15 of the NFL, and for most of us, the opening week of fantasy football playoffs! It’s been a long, strange trip, and if the last few days are any indication, it’s going to get much weirder. This Sunday, the New York Giants host the Dallas Cowboys. While there may not be many casual viewers, this game has all the makings of a slog, but there are intriguing players who deserve a closer look. NFC East football has been dominated by Dallas recently. Can it continue? Probably. Nevertheless, we must look to the Giants first, to see who, if anyone, can emerge from the rubble this Sunday.

Yikes. Please check in on your friends who are New York Giants fans. They are not well. The 4-9 squad has been through it all, and unfortunately they now have to face off against a Dallas team favored to win by double digits.

So is there a DFS dart throw available? Sterling Shepard makes a strong case! He has a 131.2 (90th-percentile among qualified wide receivers) Burst Score, which is comparable to former Cowboy Dez Bryant. 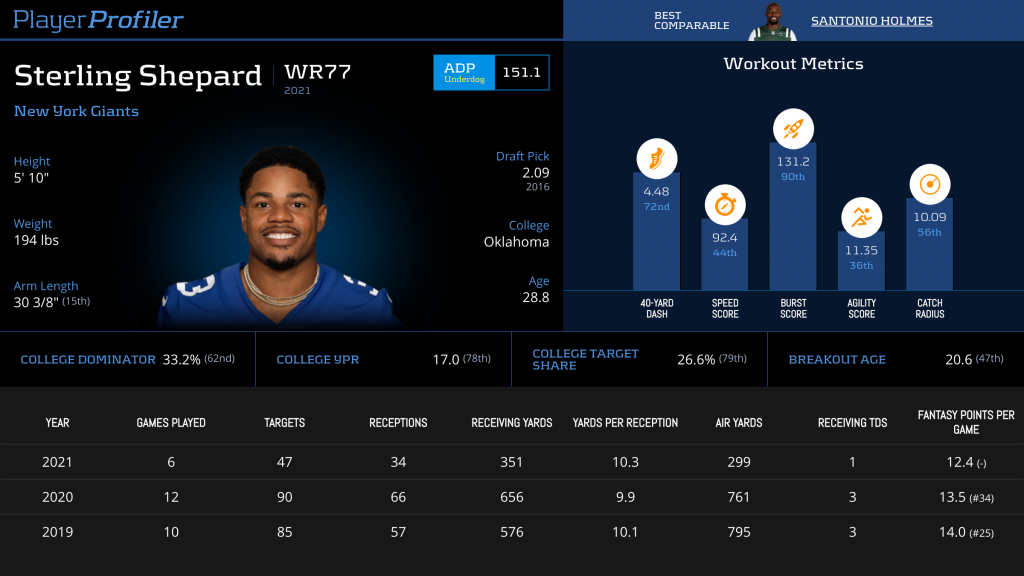 New York may be in a setting where they need to pass the ball playing from behind, so if a desperation play at wide receiver is needed, there is enough evidence to use Shepard.

I don’t make the rules, but if Saquon Barkley starts, he is in your lineup.

Last week, with only a 54.5-percent Snap Share, Barkley scored 18.5 fantasy points, good for a top 12 RB performance in leagues with PPR scoring. The injuries are certainly a cause for concern, but you can’t deny his history of production. One last note on this team: Kadarius Toney is currently unable to play due to COVID protocols, however, if he happens to be cleared in time to play, I can see a path to success for him. The last time he played against Dallas, he scored 29.6 PPR points, and all while only having a Snap Share of only 58.7-percent.

With all that being said, it’s hard to get excited about playing any Giants players. They have a team total of only 17 points, only the New York Jets have a lower projected point total (16.25). There will be cheap PPR points scored by someone on this team, likely late in the game.

Before we talk about the Cowboys offense, we need to talk about Micah Parsons. 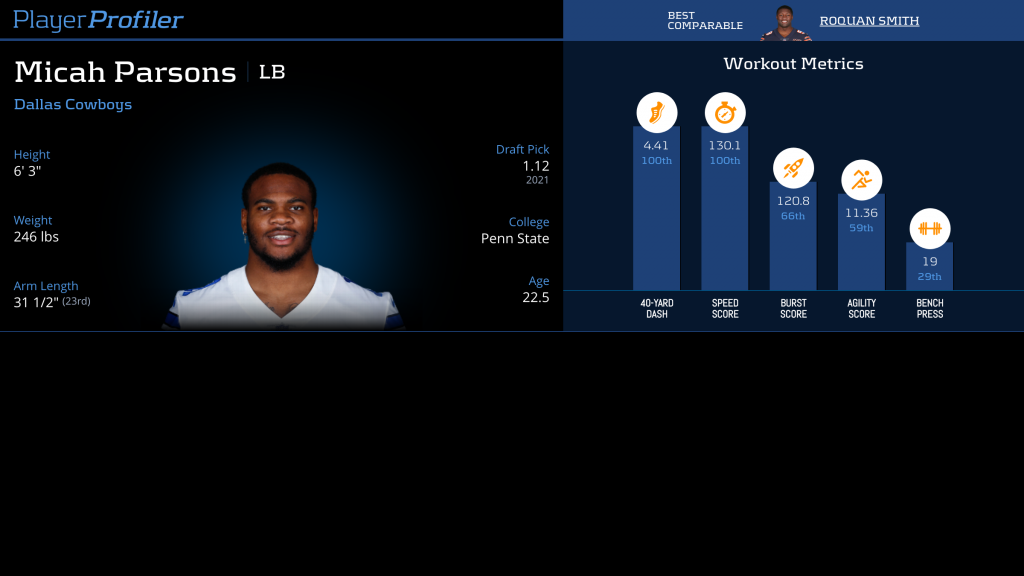 Being a football fan, it’s simply a joy to watch someone excel at the sport, and excel he has. Most importantly, he has been the catalyst of change for this defense, completely unrecognizable from last season’s abysmal performance. If there weren’t enough reasons to be concerned about starting Giants players, they now have to deal with that.

The last time we saw CeeDee Lamb, he was the leading receiver with the most receptions and yards last week against the Washington Football Team. But perhaps the most interesting item was his usage in the backfield. He had the highest YPC of any ball carrier last week, but it’s incredibly exciting to see the coaching staff adjust with a banged up running back room and put the uber-talented receiver in the backfield. 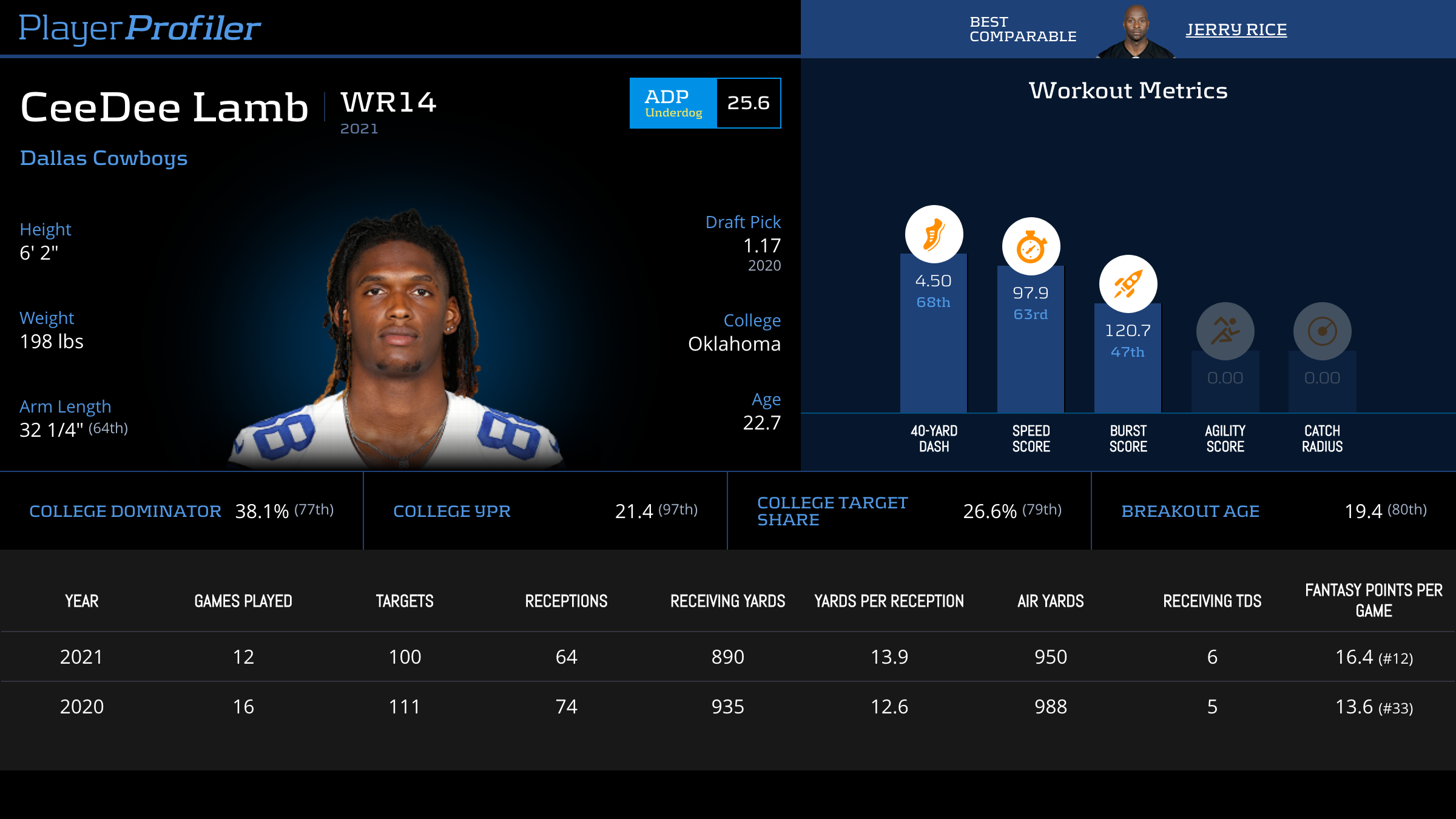 Although the Cowboys have recently struggled with the passing game, I would fire up all your Cowboys pass catchers, but temper expectations because this game is shaping up to be a lower scoring match up. With the low point total projected for the Giants offense, and the matchup problems they will face against the Dallas defense, this has all the makings of a game dominated by the Dallas running backs.

Establish With Ezekiel or Pound It With Pollard?

Ezekiel Elliott has clearly been hobbled by an injury, and it’s shown not only in the games, but also in the numbers.

Since Week 8, Elliott has had only one game where he had more than 15 carries. Also, the Snap Share hasn’t reached 70.0-percent since Week 8. We likely wont know the status of any knee injury with him, and honestly I wouldn’t expect a top five performance, but the opportunities are there for him to produce, even if the Giants were to surprise the Cowboys. Similar to Saquon Barkley, you’re starting him. It’s a little more tricky with Tony Pollard. He was out last week after logging only a limited practice, but he has put in full practice this week, so Tony truthers stay tuned! We may get to see our favorite backup running back ready to salt away this game with a big play reminiscent of what he did against the Saints.

Ezekiel Elliott is a RB2 with RB1 upside.

Tony Pollard is a risky RB2.

Sterling Shepard is a WR3 with upside.

Mike Glennon is, for me, a top PlayerProfiler page: 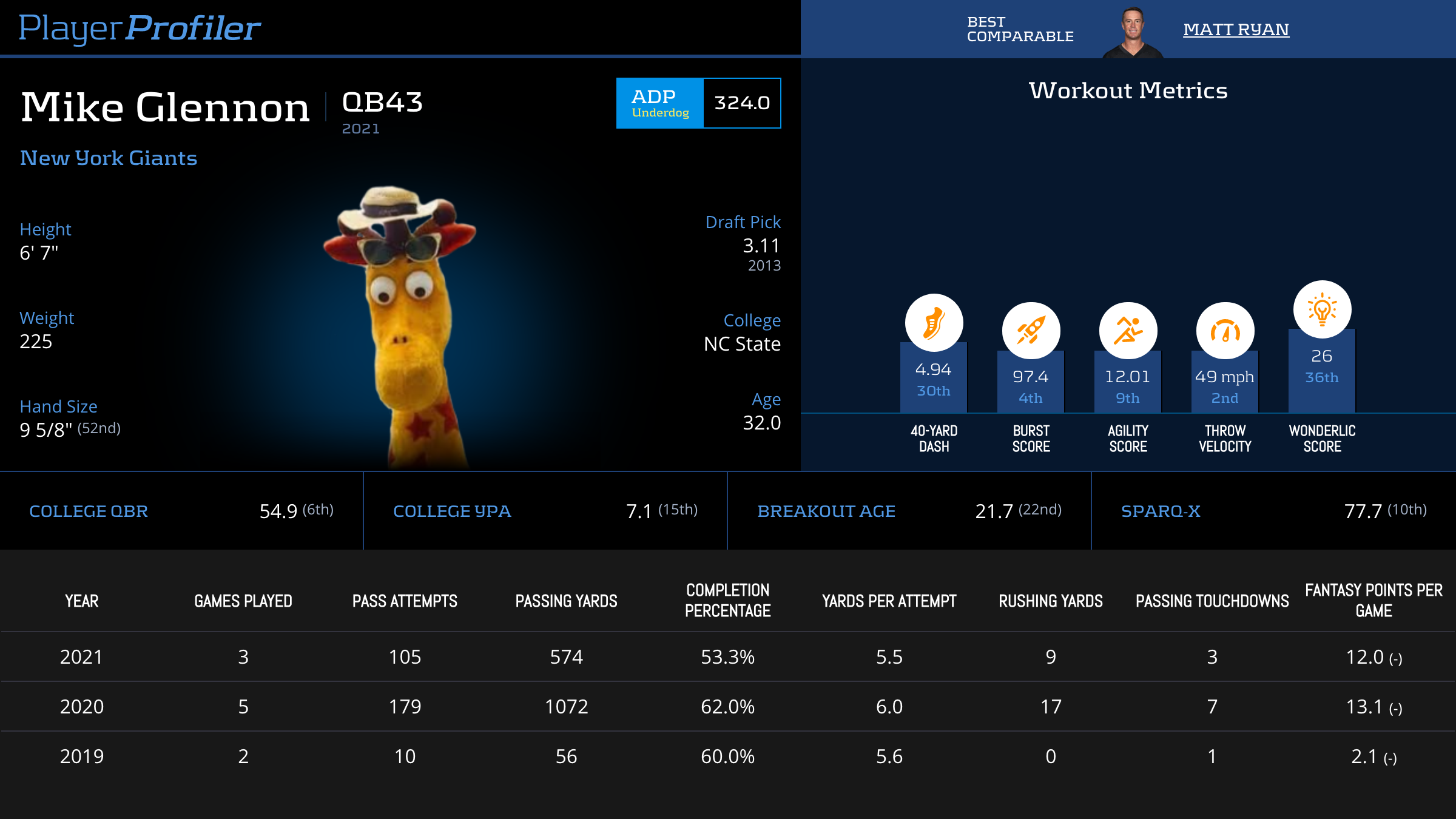 The Cowboys may not be in a great spot with running back injuries, and they’re struggling to find an offensive rhythm. Fortunately for them, New York might be in an even worse spot. The poor, pitiful Giants have had a rough go at it this year, and it’s hard to paint a picture where they can come out on top. I do not see that happening this weekend. I’m sure Mike Glennon can dominate the Wonderlic, but take down a Micah Parsons–led defense? I believe I’ll pass.