After the NFL Draft, Team RotoUnderworld enjoys taking a stroll through the draft prospects to find players who compare closely to an existing NFL player.  The most popular and oft-discussed feature of PlayerProfiler.com is the Best Comparable window.  The Best Comparable Player algorithm quarterbacks, running backs, wide receivers, and tight ends sorts, dismisses, and ultimately matches each skill position player to his most similar counterpart in the NFL.

After down-selecting based on stature, we then group players by college production (College Dominator Rating and Breakout Age), and finally by athletic athleticism (40-time, Burst Score, and Agility Score).  Production is weighted more heavily than workout metrics, ensuring that a workhorse such as David Johnson could never be comparable to perennial underachiever Christine Michael.

The myriad of permutations from just a handful of PlayerProfiler metrics demonstrates to the true uniqueness most NFL athletes.  While players like Derrick Henry have no NFL comparison, a handful of running backs in this year’s draft class did possess relatively close comps.

Here are the top-5 closest comparables from the 2016 NFL draft class.

No. 1: Kenneth Dixon to Jay Ajayi

Kenneth Dixon and Jay Ajayi were college workhorses toiling outside the power conferences.  At 215-220-pounds, these rugged backs were ideally suited for bell cow roles in offenses that otherwise lacked NFL-caliber talent.  Louisana Tech and Boise State ran their offenses through Dixon and Ajayi respectively, evidenced by their 40-percent-plus College Dominator Ratings in their final college seasons.

In his final season at Boise State, Ajayi led college football with 347-carries while also recording 50-receptions.  Despite an impressive workhorse profile, a sub-5.5 yards per carry and fifth round draft slot revealed Jay Ajayi as a college compiler even before he was usurped by Damien Williams, particularly in passing situations, his rookie season. 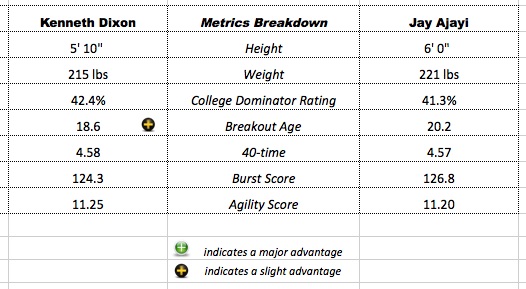 Kenneth Dixon‘s 5.2 yards per carry his final two seasons at Louisiana Tech also fell below the 50-percentile, but unlike Ajayi, he averaged more than 30-receptions in multiple seasons.  While his comparison to Ajayi is a red flag, Dixon’s superior downhill running and receiving skills suggest he will have a more productive NFL career than his collegiate doppelgänger.

No. 2: Ezekiel Elliott to Matt Forte

Looking back through time it’s easy to find Ezekiel Elliott‘s best-case NFL outcome: Ladanian Tomlinson.  Walking back from the extreme, the Matt Forte comparison is both stylistically and analytically apropos.  Both Elliott and Forte were epic college producers with upper percentile Speed Scores and all-terrain skill sets.  While it took Forte longer to break out, when he did, he surpassed 2400-total yards as a senior at Tulane.  Matt Forte went on to exceed 1200-total yards in each of his eight NFL seasons in Chicago. 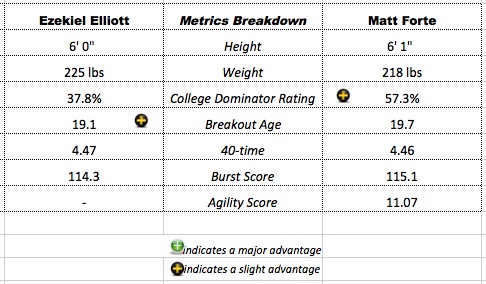 No. 3: Alex Collins to Mark Ingram

One of the most prolific running backs in the history of the SEC was not even the first running back drafted by the Seattle Seahawks in the 2016 NFL Draft.  Despite looking like a facsimile of fellow SEC workhorse, Mark Ingram, Alex Collins was selected in the late-fifth rather than the late-first round.  Yet, Shawn Siegele from Rotoviz recently noticed that Alex Collins looks eerily similar to Mark Ingram. 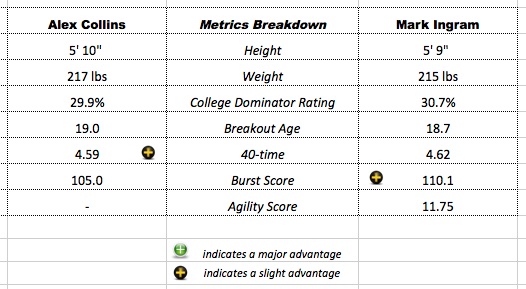 Mark Ingram‘s first-round draft pedigree buoyed his perception through his early years of minimal production in New Orleans.  Conversely, Alex Collins lack of draft capital leaves him vulnerable without a clear role on the Seahawks run game.  Thomas Rawls recently locked up Seattle’s early-down grinder role with a +19.2-Production Premium and a 5.6-yards per carry in 2015, and C.J. Prosise projects to dominate the passing down work this season.  Regardless, Alex Collins is an injury away from becoming Mark Ingram-West.

No. 4: Daniel Lasco to David Wilson 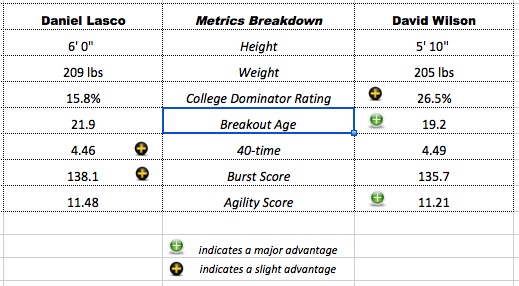 Marshaun Coprich‘s agent deserves a bonus for guiding his client to the New York Giants’ soft RB depth chart headlined by 31-year old Rashad Jennings.  Despite going undrafted, Coprich was a superior prospect to fifth round pick Paul Perkins.  He may not supplant Perkins by week-1 of the 2016, but it could happen before the start of the 2017 season. 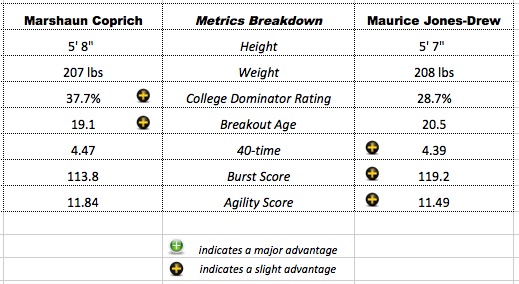