The best part about playing Fantasy Football is drafting your Fantasy Football team in the fall with all of your friends. But after that, a lot of leagues tend to lose their juice because a lot of owners draft bad players. The goal with this must-draft list series is to assure you do NOT draft “Bad Players” or values, but instead draft the “Best Players” or the best values. Reading an article about the best players to draft is only part of the job, you also have to draft the team, not show up drunk on draft night and let values fly by you, there is game theory to take into account. Don’t overlook draft night. Cody will not have all six players on every fantasy team nor should you but these will be his most rostered in 2022, and he believes you should jump on board. The following players are Cody Carpentier’s Must-Draft targets for the 2022 Fantasy Football season.

Not a lot needs to be said for Jalen Hurts in Fantasy Football. If you are a fan of the Eagles, the talent that Hurts possesses is apparent, but if you just listen to the Philadelphia media, you’d think otherwise. In 2021, Jalen Hurts finished Top 10 in Fantasy points in each of the first 7 weeks of the season, while racking up Twelve QB1 Weeks over the course of the season. Rushing is a big part of it, with an ADP of 85.5 on Underdog Fantasy, Hurts led the NFL in Fantasy Points per Dropback, Carries, Rushing Yards, Red Zone Carries, and Rushing Touchdowns. Oooof!

The Eagles are continuing to play Hurts in a similar role to Lamar Jackson in Baltimore, but there is one big difference. They traded for A.J. Brown, and drafted Devonta Smith, unlike the Ravens who traded away Marquise Brown, and added more running backs to take away from Jackson’s opportunities. While I still think Lamar Jackson should be the favorite to win the MVP at CaesarsSportsbook.com, Jalen Hurts is a Must-Draft in Fantasy due to value and being able to draft Hurts three rounds later. 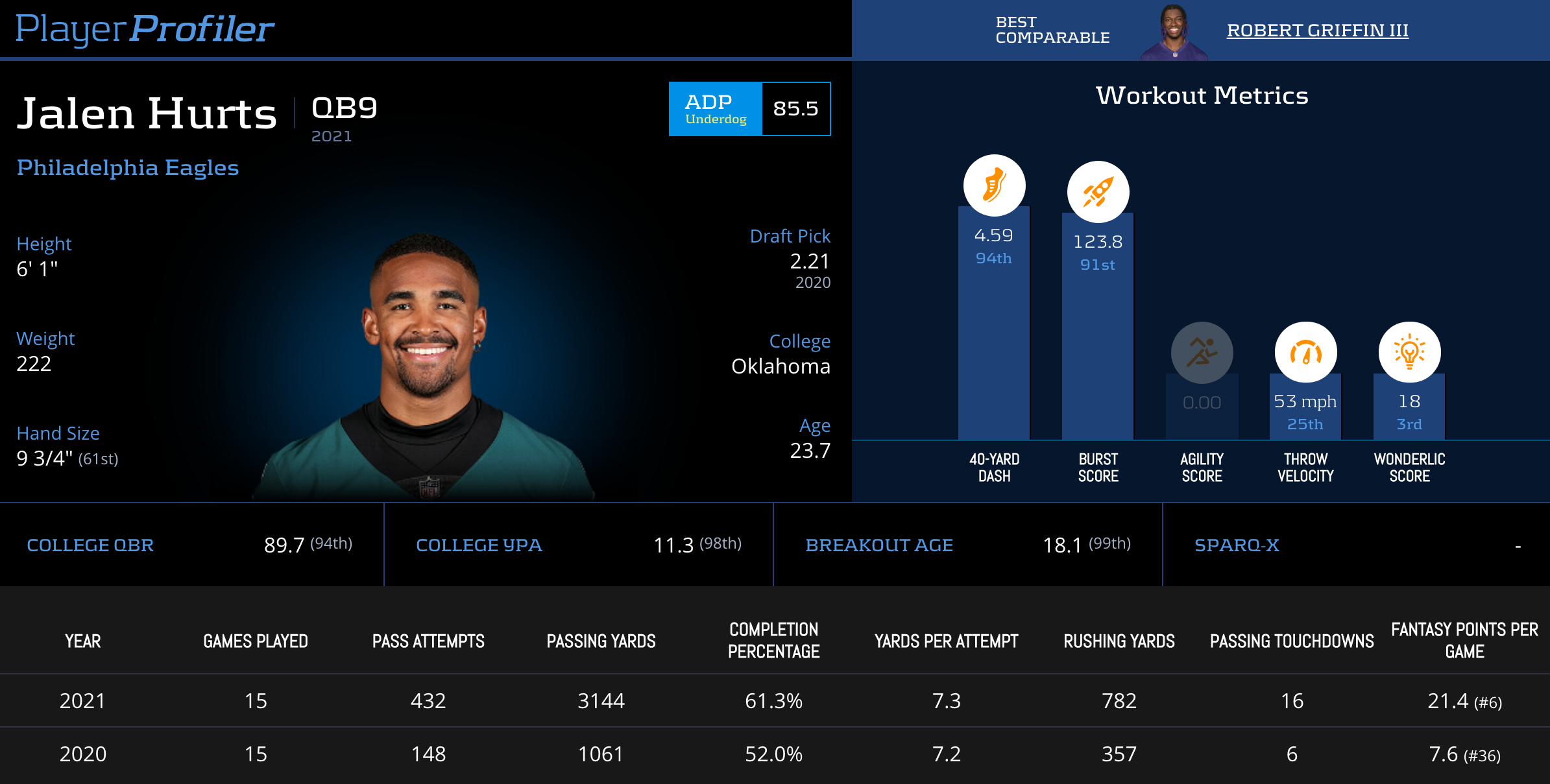 The most dominant force at the Wide Receiver position since day 1, since Randy Moss burst onto the scene in the late 1990’s. Not only has Mike Evans set the record for most consecutive 1,000 yard receiving seasons to start a career (eight seasons) – he also finished with over 1,000 yards in both seasons at Texas A&M. For a full decade Evans has stayed the most underrated wide receiver in the NFL, never missed more than 3 games in a season, and continued to smash when given the opportunity.

In 2022, an opportunity will be knocking again. With teammate, Chris Godwin likely on IR until after Week 8, Evans and Free Agent signing Russell Gage look to be Tom Brady’s go-to targets for the first quarter of the season. Mike Evans is a Must-Draft Wide Receiver in 2022 as he enters the season at +2000 on CaesarsSportsbook to lead the NFL in receiving yards. That is without Rob Gronkowski, without Chris Godwin, and WITH Tom Brady.

Breece “The Beast” Hall has officially signed his rookie contract, after much worry from the New York media. Over the last three seasons at Iowa State, Hall climbed from 1,100 total yards as Freshman season, to back-to-back 1,700 total yard outputs in 2020, and 2021 as the lead back in Ames. Hall joins a Jets backfield that despite the electricity from Michael Carter in 2021, was still missing that every down grinder role that the organization hoped would come to light from Lamical Perine and Tevin Coleman.

Not only is Breece Hall a value in 2022, but he is a value in Dynasty. With an offensive line ranked in the Top 15 and growing by many dependable outlets, the talent in New York is better than EVER after adding Elijah Moore in 2021, and Garrett Wilson in the Top 10 of the 2022 NFL Draft. Breece Hall is a Must-Draft, no matter what your feelings are on Zach Wilson. The offensive line is ready to take that next step, and Hall will be right behind ready to burst through the hole to the end-zone in 2022.

Are we buying, Cole Kmet!!

During the next few weeks, I will be breaking down The Podfather, Dario Offstein, and my own Must-Draft lists for the 2022 Fantasy Football Season. Reminder, the above list of players may not be attainable in every single draft due to game theory from players in your draft, or change in ADP. We also do not advise drafting all of these players in every single league, build your rosters to be fun, dominate and win. Thank you for the continued support and for reading along. Feel free to Tweet us @RotoUnderworld on Twitter and let us know your thoughts on the above Must-Draft List.