Marquise Brown last appeared in this article series entering Week 5. He proceeded to post his best game of the season, catching six passes for 77 yards and a touchdown. Hollywood’s success is highly contingent on Lamar Jackson connecting with him on the deep ball.

Brown has seen 16 (No. 2) Deep Targets and has a 15.9 (No. 8) Average Target Distance mark. He is a boom and bust wide receiver that will look to catch a couple of deep balls against a Steelers defense that just got shredded by A.J. Brown.

Adam Thielen is the Air Yards king. His presence has graced this article every week in which he has appeared on the main slate. There is little else to say. He squares off against the Packers in a game that has one of the highest Vegas projected game totals on the week. He makes for an ideal member of any lineup looking to stack this game.

The Steelers WR1 is priced at the Value List threshold for some bizarre reason. Diontae Johnson comes off a week where he saw 15 targets and finished as the WR3, scoring 29.0 fantasy points. He’s dealing with a toe injury, but is expected to play against the Ravens. Despite the tough matchup, Johnson is seeing more than enough opportunity to be a value at this DraftKings price.

Will the real WR1 of the Colts please stand up! Marcus Johnson lead the Colts in targets, receptions, yards, Air Yards, and fantasy points in Week 6 against the Bengals. While he is still being out-snapped by veterans Zach Pascal and T.Y. Hilton, the fourth-year former undrafted free agent is clearly the only wide receiver on the roster that can effectively stretch the field. 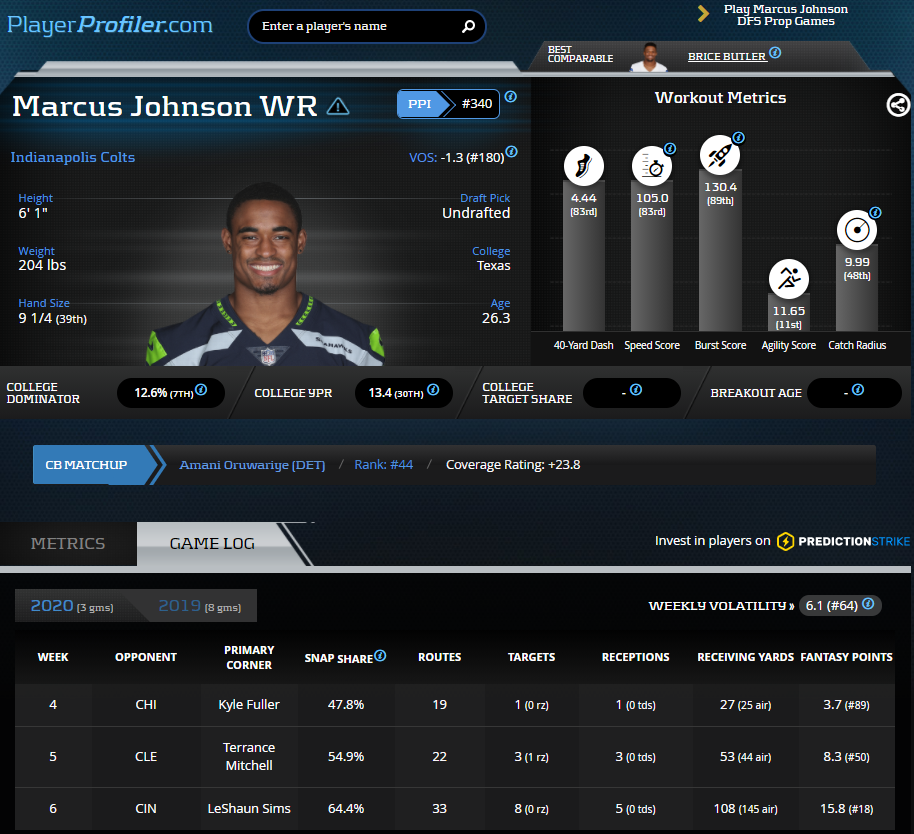 With an 17.8 Average Target Distance mark, Johnson is seeing six more yards per target than his aforementioned teammates. Priced at the stone cold minimum, look for him to exploit a Detroit secondary that is magnanimous to opposing wide receivers.

Jerry Jeudy is yet another familiar face to the Value List. He last appeared on the list in Week 6 when he was priced at $5,500. It appeared that he would no longer meet the price threshold moving forward. However, after two weeks of posting less than 6.0 Fantasy Points per Game, he is a value again. Despite his recent performance, Jeudy continued to serve as Denver’s primary wide receiver last week, leading the wide receivers in Air Yards. With his teammate Tim Patrick healing from an ailing hamstring, Jeudy will look to reassert himself as the clear cut primary option in the Broncos passing game.

In a week where Justin Herbert threw for 347 yards for three touchdowns, Mike Williams caught one pass for four yards. Regardless, the former first-round pick remains a pivotal part of the Chargers downfield passing attack. While he was out-produced by undrafted free agent Jalen Guyton in Week 7, Williams is both out-snapping and out-targeting Guyton on the season. It was only two weeks ago that Williams parlayed his 17.3 (No. 3) Average Target Distance into the WR5 finish on the week.

Josh Reynolds stole the show for Los Angeles in Week 7, out-producing both Robert Woods and Cooper Kupp en route to amassing 15.2 (No. 31) fantasy points against a stout Bears defense. He’s seen at least five targets in each of the past two games. 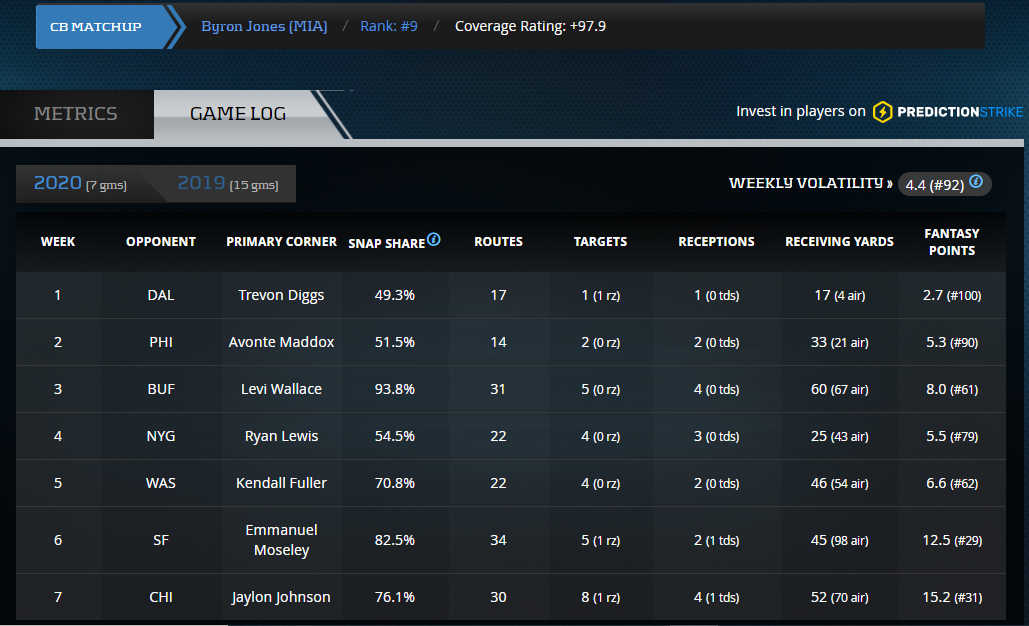 If Tyler Higbee remains out, look for Reynolds to continue to be used as a key component of the Rams passing attack. Priced slightly more than the stone cold minimum, he is a great cash game play for those looking to pay up elsewhere.

Jeff Smith took a backseat to Breshad Perriman in Week 7, seeing a 15.6-percent Snap Share and only one target. However, with both Perriman and Jamison Crowder ruled out for Week 8, Smith should be featured in three wide receiver sets. He leads all Jets receivers with 250 Unrealized Air Yards. Set to face off against the Chiefs, there should be penalty of garbage time opportunity for Smith finally realize some Air Yards.

That putrid smell emanating from New England is the Patriots offense. Since Cam Newton‘s return from COVID, the Pats have thrown for an average of 159 passing yards per game and zero passing touchdowns. Regardless, Damiere Byrd is the last man standing in the Patriots passing attack. With both Julian Edelman and N’Keal Harry expected to miss Week 8, Byrd will look to supplant Edelman as the Patriots leader in Air Yards. Priced under $4,000 and with 4.32 (99th-percentile) 40-Yard Dash speed, Byrd is one big play away from from maximizing his value.

Someone get Darnell Mooney a quarterback! The precocious rookie wide receiver is No. 7 among all qualified wide receiver in Unrealized Air Yards. He has just missed several big plays in the receiving game, including a would-be 96 yard touchdown last week. 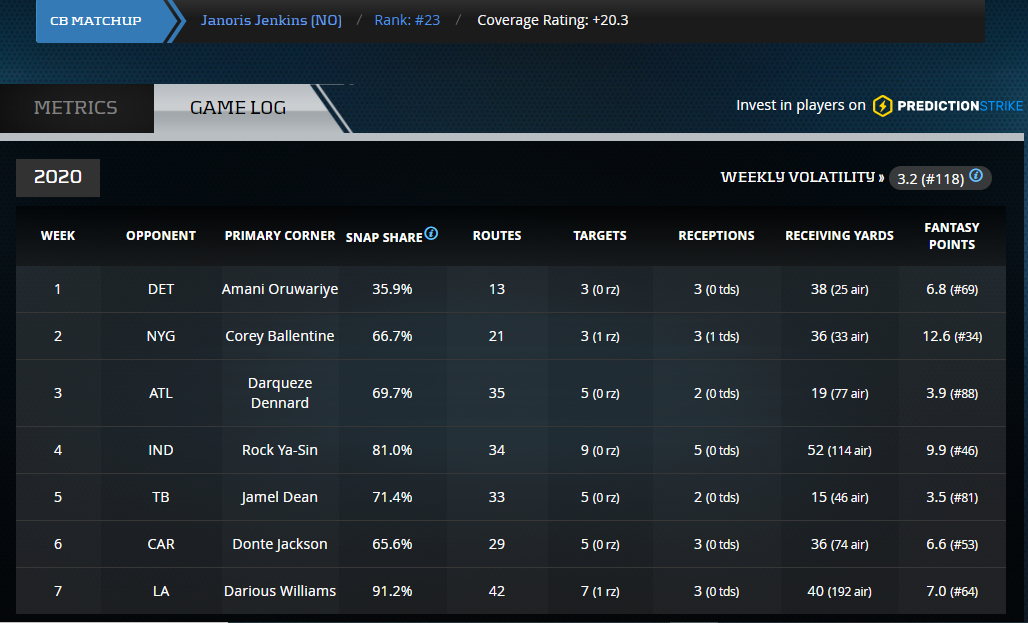 With Allen Robinson looking unlikely to play, Mooney will be the de facto WR1 for Chicago in Week 8 against the Saints. With even more opportunity likely headed his way, Mooney should finally realize some Air Yards.

After being left off this list for multiple weeks, A.J. Green returns after looking alive again. The former perennial Pro Bowler has posted over 15.0 fantasy points in back-to-back weeks and has seen at least 131 Air Yards each week during that same time.

Green appears to have shaken off the rust and stiff-armed father time for now. He is a recommended play in cash formats.

Marquez Valdes-Scantling is now the Air Yards Value Score leader for two consecutive weeks. However, he has not been all that valuable in fantasy lineups. He comes off a week where he failed to score a full fantasy point. He is nothing more than a tournament dart throw if you are looking to stack the Vikings-Packers game.

Good luck to all in week 8. May all your Air Yards be realized.