The NFL playoffs are here and I couldn’t be more excited. Outside of Thanksgiving, there isn’t a weekend I like more for DFS than the Wild Card, which is why I’m creating a series based on building the best cocktail for each slate. We have familiar teams, offensive stars, and chalk to leverage on both Saturday and Sunday. So instead of giving you one long, drawn-out article about matchups, I will provide you with a slightly shorter one for each weekend slate based on stacks and strategy.

Now, let’s build ourselves a cocktail.

The Wild Card DFS Cocktail Base

Just like any cocktail, you need a base spirit. Since the Saturday slate is just two games, we will focus on an essential cocktail where you want plenty of the base with a splash of demerara and a couple dashes of bitters. Much like two-game slates, people try to overcomplicate the Old Fashioned. Muddling orange and cherries while adding ounces of syrup only ruins the bourbon. The point of an Old Fashioned is to accentuate the flavor of the bourbon, not mask it.

A straightforward base that I won’t pivot off much, even with the weather. Josh Allen has come alive over the final five weeks of the season. He’s produced five straight 20-plus point performances with two north of 30. His running mate Stefon Diggs has been right there with him, giving you 20-plus points in two of the past three. Just three weeks ago, they blew up for 55.46 points combined. So, continue to ride the wave; the weather will keep it from heavy chalk.

Don’t be afraid to pile on with Damien Harris, who has been highly successful against the Bills as of late. The Bills will likely focus on forcing Mac Jones to make mistakes, allowing Harris to run all over them. The Bills have shown multiple times throughout the season, they are okay with teams running, as long as they don’t allow big plays while creating turnovers. The games the Bills have lost were due to the inability to prevent offensive explosions.

And as for Joe Mixon, you can actually use him to create leverage. Mixon has only produced at a significant level once in the past five games while Joe Burrow and company have buried their opponents. As a result, the majority of people who will have shares of Mixon will likely be heavy on the Bengals side.

Regardless, 44.4-percent of your roster taking over 57.8-percent of your salary should scare enough players off starting their lineups in this fashion. The ones who do have many options in the $4,000 range, keeping your lineup from being mainstream.

Bigger slates are similar to more complex cocktails as you have to add in more spirits or balancing agents to make it work. However, with the Old Fashioned, you keep it simple. 0.25 ounces of demerara or simple syrup—pending the proof of your bourbon.

What this means is I don’t want to run out and add too many mid-to-low-priced values to try to sweeten up my lineup. Look for the players with the opportunity versus correlation. Trying to add a Gabriel Davis, Dawson Knox, or even Cole Beasley to this base stack will pull too many other entries close to yours. At this point, we need balance with upside across the rest of our lineups.

Zay Jones is at the top of the list. If you haven’t been paying attention, Jones has seen at least five targets over the last seven games and at least seven in the previous five. Unfortunately, it hasn’t led to a ton of yards, but he is still seeing a 13.2 (No. 13 among qualified wide receivers) Average Target Distance. The hope is the return of Darren Waller can open up some one-on-one opportunities on the outside—something the Bengals have struggled with as of late. They have allowed a 10-percent (No. 28) Explosive Pass Play Rate over their past five games.

If Jones can give you a big-play score or two, it works well with Mixon, as it gives the ball right back to the offense with little time taken off the clock. Playing Mixon with Hunter Renfrow or Josh Jacobs does the opposite.

Meanwhile, people still neglect to put running backs with quarterback stacks, so Devin Singletary is safe and should see red zone opportunities. He has seen five rushes inside the five over the past three weeks. Of course I want Allen to run in a couple touchdowns, but if the Bills can get four to five touchdowns, Singletary will likely have at least one.

The remaining three players determine which route you are forced to go with your flyers.

Just a Couple of Dashes 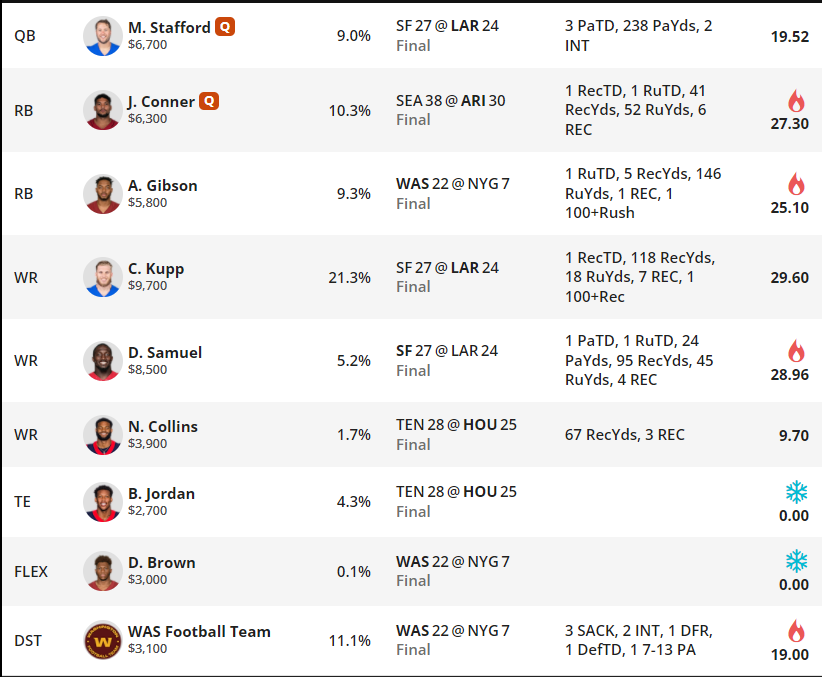 If Only I Submitted the Right Flyers

Flyers are like bitters. They are made to bring out the aromatics with some flavor, but if you overdo them, it’ll kill your cocktail. Two dashes is preferred: one Angostura and one orange. Finding the perfect flyer is challenging, which is why you don’t want to add too much. However, if you pick the right one – such as Danny Amendola in Week 18 – it will pay off big.

DeSean Jackson is in play purely for his deep-threat ability and the Bengals allowing explosive pass plays. Similar to Zay Jones, he correlates with the Game Script if you play Joe Mixon. As for Bryan Edwards, he was relied on a decent amount in crunch time during Week 18 and has now seen three red zone targets over his previous three games.

N’Keal Harry only makes this list because there is one type of player the Bills have struggled to cover this entire year: the big possession receiver. Harry saw six targets the last time they faced off but only brought down two. In addition to the lack of efficiency, none of those were red-zone targets.

Isaiah McKenzie has come back to Earth after his stellar performance in Week 16. However, he has still run 21 routes over the past two weeks, seeing three targets. Not great, but when you consider McKenzie also has two rushing attempts, it shows he’s still in their gameplan as a threat to score at any time.

Last but not least, Samaje Perine isn’t someone I would typically consider a flyer. However, the low ownership should translate to a leverage play against the entire Bengals offense. Both teams have run a slower pace of play for most of the year, although the Raiders have pulled ahead due to the recent Game Script. If the Bengals have limited opportunities to score and Perine gets them, we could be looking at a tournament breaker.

Good Luck on the Saturday Slate! To see a strategy for the Underdog Gauntlet no one else is talking about, check out Manipulating Values in the Gauntlet!

Also be sure to check out my Sunday slate later in the week!