Looking for LeGarrette Blount: An Evaluation Key for Early-Down RBs 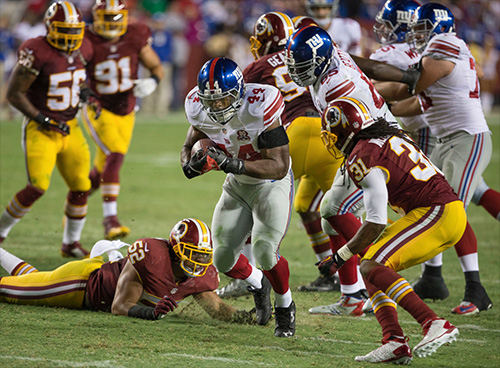 In the game of real football, Blount exemplifies the value of an effective two-down pounder.  After slipping into the free agent ranks in many fantasy leagues in 2014, Blount delivered multiple strong late-season performances against playoff-quality competition. Blount’s multi-touchdown, fantasy RB1 performance in week 12 vs. Detroit was his most impressive.  Still, most fantasy managers seek backs who are on the field for three downs and provide more consistent week-to-week production.  All-purpose RBs like Le’Veon Bell, Demarco Murray, and Jamaal Charles require significant draft capital to acquire.  Whether you are experimenting with Zero RB, or have simply found yourself needing RB help later in your draft, you would be wise to target some productive two-down RBs.  They may not have the sex appeal of an every-down player, but these backs can match the output of the league’s elite workhorse backs in weeks when they faced poor rush defenses.

Here is a list of last year’s known grinders heading into the season that juxtaposes 2014 ADP and PPR fantasy points per game rank:

Early-down specialists outperformed their draft positions by +0.4 in 2014 even after accounting for the handful of relatively expensive early-down backs (Peterson, Ball, and Gerhart most notably) who represented some of fantasy football’s most crushing draft capital investment losses last season.  However, numerous high variance rookies and mid-to-late-round picks greatly exceeded their draft position, which reviewed in aggregate, overwhelmed the negative impact of the high profile busts. Furthermore, as with Stevan Ridley, LeGarrette Blount and Jonas Gray last season, the predictable usage of 2-down grinders enables fantasy gamers to further optimize their weekly lineups by only starting early-down specialists when the opposing defense allows more rushing yards and touchdowns than league average.

As fantasy gamers tilt their personal player rankings in search of the next Danny Woodhead-PPR goldmine, the perception of the less versatile, and often less athletic, early-down backs has been waning in recently years. This apathy has dropped the sticker price of prototypical grinder RBs across the board to a level where the 2-down backs now return consistent, positive value, particularly in mid-to-late rounds when the Zero RB tacticians often stockpile running backs.

Though the following running backs will likely have muted roles in their team’s passing games, they will nonetheless be fantasy assets in 2015:

The late-middle rounds hold the best value proposition for early-down runners, though I wouldn’t fault any drafter for targeting one of the most prolific early-down grinders in college football history, Melvin Gordon.

Many football pundits wants to believe Melvin Gordon is Jamaal Charles 2.0. I think he’s actually somewhere between Charles and Marshawn Lynch. His closest player comparison on PlayerProfiler.com is Matt Forte strictly from a size, athleticism, and collegiate production standpoint, but if you click through a few comparisons you also end up on Lynch’s profile. Gordon’s utilization at Wisconsin suggests that he is utilized in much the same way Lynch is:  Bruising power runs. It’s true that Beast Mode has surprisingly soft hands, but he isn’t called to use them with the frequency of a true receiving-back.

The presence of 3rd-down specialist Danny Woodhead all-but-promises that Melvin Gordon will be relegated to an exclusively early-down role.  At the very least, the Chargers are a productive offense, so they are one of the most desirable landing spots for any two-down grinder. While most early down grinders are undervalued heading into the 2015 season, Gordon’s 28.7 ADP in recent MyFantasyLeague.com money leagues illustrates that he is currently priced at his best case scenario, which provides little incentive to draft him in round-3 where elite wide receivers are still available. While Melvin Gordon projects to eventually become a true fantasy RB1, he is a better dynasty league target than redraft league target at the moment.

Entering the league, Carlos Hyde‘s college efficiency (7.3 YPC at Ohio State) and size-speed combination (101.0 Speed Score) intrigued many fantasy gamers.  Hyde’s 4.62-40 time and 115.7 Burst Score suggests he will always struggle to score from distance, but he nevertheless fits the workhorse prototype that NFL GMs covet. As a recent second round draft investment, he is guaranteed a starting role as well as goal line carries in the wake of Frank Gore’s departure to Indianapolis, and less than 30 NFL running backs have this distinction.

Unfortunately, Carlos Hyde does not get to play on the same 49ers team that Gore built his career on.  The 2015 49ers’ offensive line projects to be one of the least effective units in the NFL. Fortunately for Hyde, his 32.6-percent Juke Rate (evaded tackles per touch) ranked No. 7 in the NFL in 2014 — he can manufacture yards with or without a crease. Hyde’s fantasy points scoring opportunities this season will also be impacted by San Francisco’s defense, which lost many of its key playmakers to early retirement or off-the-field issues. In games when the 49ers are losing, second half carries will decrease while his running back targets will likely increase.  Given his role as an early-down grinder, an increased number of offensive plays may not actually be a positive development.

Considering the very real risk that San Francisco’s offense will rank close to the league bottom in many categories, drafting Carlos Hyde at his current 40.8 ADP in recent MyFantasyLeague.com money leagues is not a prudent use of fantasy draft capital. Hyde’s closest comparable player, Lorenzo Taliaferro offers a better value proposition. Taliaferro will surely be operating on a better offense, and he is available at least 100 picks later.  If Taliaferro usurps Justin Forsett as the Ravens’ early down grinder some point during the 2015 season, he will be one of fantasy football’s great bargains.

Mark Ingram – Now is the Time

Now that Mark Ingram has FINALLY delivered on the promise he made in Alabama, we can treat him as a proven winner.  Many offseason indications suggest that the Saints are gearing up for a more balanced ground attack in 2015.  The addition of C.J. Spiller means that Ingram will be the two-down pounder barring any injuries to the Saints backfield.

While not especially athletic, Mark Ingram has now found productivity in both college and the NFL, largely in part due to respectable run-blocking and a surprising arsenal of running maneuvers.  A healthy Ingram could see as many as 275 carries which could result in a low-end RB1 season.  At his current 32.9 ADP in recent MyFantasyLeague.com money leagues, Ingram represents solid redraft value.

Isaiah Crowell – In the Shadow of Duke Johnson

All of the 2015 Browns Backfield Buzz® has been about standout rookie Duke Johnson .The Browns’ front office takes every opportunity to praise him; the organization stated that they believe he can be an every-down back. Duke Johnson’s 33.0-percent College Dominator Rating illustrates that he is capable of ascending to bell cow status in the NFL; this will occur in 2015 if Isaiah Crowell fumbles the job away (Crowell fumbled the ball at an alarmingly high rate of 1 time per 50 touches in 2014).  As a rookie, Johnson projects to be team’s primary passing down specialist, leaving only Terrance West to threaten Crowell’s early-down and red zone opportunities.

Cleveland selected Terrance West in the third round of the 2014 draft; a significant investment. In his rookie year, however, West failed to deliver on his NFL Draft slot by posting an abysmal -19.7 Production Premium (No. 66 in the NFL) in 2014. Note: Production Premium is PlayerProfiler.com‘s situation agnostic, per-touch efficiency metric.

While the organization is more heavily invested in Johnson and West, Isaiah Crowell is the favorite to win the Brown’s early-down grinder role behind numerous efficient performances throughout 2014. Crowell’s Production Premium on PlayerProfiler.com last season was +6.1 (No. 27 in the NFL), a significant accomplishment for an undrafted rookie supported by league-bottom talent at the skill positions and an injury-ravaged offensive line last season.

Unfortunately, the Browns did little to upgrade Crowell’s supporting cast at the skill positions this offseason. However, their offensive line is a full of run-blocking maulers which will make Crowell’s work much easier, provided he receives enough touches to achieve relevance.  Crowell’s size and strength, combined with a reasonably dominant college career and young breakout age suggest that he can pull his weight on the early downs if he’s given the chance.  His 71.1 redraft ADP seems affordable at first glance, but the sheer incompetence of the Browns passing game will limit his red zone touches and lower his ceiling, rendering his price tag more appropriate than good value.

Chris Ivory – Faster Than an Elephant

Chris Ivory has some seriously bad luck.  He was once the least-favored RB on the almighty Saints.  Unfortunately for him, during his time in New Orleans the offense was centered around Drew Brees and a high-volume passing attack. Now, Ivory is far and away the most highly-drafted RB on his team.  Unfortunately for him, that means he is only slightly more desirable than Zac Stacy and Stevan Ridley.  The Jets have not been the best landing spot, but Ivory has actually done remarkably well given the circumstances.  [Ed. Note: DID YOU KNOW, through the first half of 2014, Ivory was a PPR RB1?  Overall RB12 through eight games.  Remarkable indeed!]

Now, Chris Ivory gets an opportunity to be the feature back in a Chan Gailey offense. Yes, the same Chan Gailey who helped lead Fred Jackson and C.J. Spiller to career years in Buffalo.  We don’t like to give coaches credit where it isn’t due, but Gailey has a track record of transforming team running games from train wreck to hype-train. Ivory also has a stranglehold on the the Jets’ early-down work and is an absolute STEAL at his RB36 redraft ADP.

Andre Williams is a big boy at 5’11” 230 pounds; the quintessential bruiser back. But that’s not all! He was dominant from a young age.  He is ridiculously explosive for his size.  Oh, and his best comparable player?  A little-known Alabama RB called Eddie Lacy.  Furthermore, Andre Williams best franken-comp is Eddie Lacy + Captain Hook (bad hands). Athleticism is not a guarantee of success, but it is a great factor to consider when sifting through the mess of late-round RBs.  Recent reports show Williams could be the starting pounder on the Giants in 2015.  This has not been reflected at all in his redraft ADP of RB53.  Williams is most definitely worth a shot at the end of your draft; he could be a league-winner at this price point. He didn’t make much of his opportunities last season, but he could certainly find relevance with a starter’s volume.

Some early-down RBs are expensive, but many more are being drafted at a discount.  If your draft concept dictates that a running back(s) be drafted in the middle rounds (when RBs bust at a 56-percent rate), consider selecting a high floor, early-down grinder to compliment your RB corps.  Between-the-tackles grinders are rarely the most dynamic playmakers on their respective teams, but they can nonetheless carry a savvy owner to a fantasy championship.