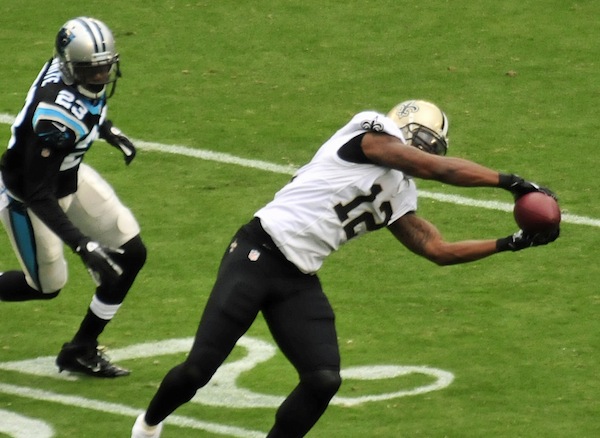 Can you name the number two receiver on Carolina in 2014? Go ahead…I’ll wait. Chances are the first name that popped in your head was Greg Olsen. Statistically you would be correct but Olsen is a tight end. If you said Jericho Cotchery, you are either a Panthers fan or need to check yourself into the nearest center for football degenerates.

Kelvin Benjamin has an overall ADP of 43 on MyFantasyLeague.com. Picks within the first 4-5 rounds of a fantasy draft should be reserved for the foundational player of your roster with minimal red flags. Kelvin Benjamin is not that player. Benjamin was among the least efficient starting wide receivers in the league ranking 83rd with 6.9 yards per target. His questionable hands also came into play as Benjamin only caught 50% of his targets and a horrible 22.2% of his red zone targets. Benjamin also led the NFL with 10 drops.

The source of Kelvin Benjamin’s success came from volume and garbage time opportunity. Benjamin ranked 5th in the NFL with 145 targets and 13th in team target percentage at 26.9%. Five of Benjamin’s nine touchdowns came in games where Carolina lost by 18 points or more. His production premium ranked 58th and his yards per target 83rd. None of these stats scream safety or upside.

In order to get a return on investment from Kelvin Benjamin in 2015 one would have to faithfully assume three things:

Neither a dynamic deep threat nor an efficient target hog, Kelvin Benjamin is an NFL enigma. Benjamin’s prospective role in Carolina’s offense in 2015 is muddled by his inherent limitations. His route running may improve this year, but Benjamin will never be known as a technician. With a burst score and agility score in the bottom 15th percentiles and a 40 time of 4.61, Benjamin will also never overwhelm defenders with athleticism. In 2014, Benjamin used his big body to make contested catches in the air or shielding defenders while getting hit. Unfortunately, his contested catch conversion rate was 43.3-percent last season (outside the top-40) — Benjamin isn’t even effective when playing to his strengths.

Given that Cam Newton‘s total fantasy points, passing yards and passing attempts have dropped for four consecutive years, Kelvin Benjamin will likely struggle to support three fantasy relevant options in the passing game: one elite tight end and two huge possession receivers. Newton’s adjusted yards per attempt have dropped three years in a row. That folks, is what you call a trend…and a downward one at that. Cam Newton will not morph into Aaron Rodgers overnight and Benjamin has an uphill battle if he wants to improve upon his efficiency numbers.

Wait until the ninth round, and then grab the discount Kelvin Benjamin… Marques Colston. Though he is now 32-years old, Colston is coming off a season in which he was superior to Benjamin by nearly every meaningful efficiency metric. If Colston and Benjamin would have received the same amount of targets in 2014, Coslton would have scored nearly 30 points more.

But what about those targets you say? With the losses of Jimmy Graham, Kenny Stills, Pierre Thomas, Travaris Cadet and Robert Meachem, the Saints have 334 targets from 2014 up for grabs in 2015. While a large chunk of those targets will go to Brandin Cooks and the newly acquired C.J. Spiller, I think it is both safe an logical to conclude that Colston could see 25-30 of those targets come his way even if the Saints run the ball more in 2015. Graham’s 21 red zone targets will also be redirected, and at 6-4, Colston projects to absorb a significant share of those coveted red zone targets.

2014 was considered a down year for Saints quarterback Drew Brees despite coming 48 yards short of passing for 5000 yards. Efficiency notwithstanding, Brees has thrown for well over 4,000 yards and more than 30 touchdowns for seven straight years. Brees has had more than 600 attempts in seven out of the last eight seasons. Marques Colston will have a clear quarterback and pass volume advantage over Kelvin Benjamin in 2015.

In 2014, Marques Colston finished as the WR36 in PPR leagues and the WR31 in standard scoring formats. Being drafted as the WR45 on FantasyPros, Colston has value built into his draft price without any consideration of his past performance or possible target increase. Drafting Colston alone will not win a fantasy championships, but at his current cost, he will likely outperform his draft position and provide matchup winning firepower in the the flex slot of a fantasy roster.

Kelvin Benjamin is the sophomore wide receiver most likely to be a Keenan Allen-like fantasy football disappointment in year two. As the 14th WR off the board, Benjamin’s bust potential is not priced into his average draft position. While Marques Colston may be older, he and Kelvin Benjamin should post similar numbers this season. With an ADP outside the top-100 players on MyFantasyLeague.com, Colston is one of fantasy football’s best-value wide receivers in 2015.