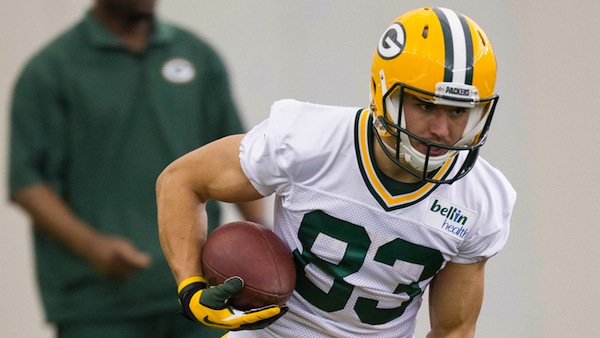 When I do word association with the word “handcuff,” the first image to come to mind is the smudged plexiglass panel staring back from the back seat of a squad car. Handcuffs do not inspire positive thoughts, and handcuffing players is not a tactic that I generally employ in fantasy football.

Yet, for years, handcuffing has been a popular fantasy football strategy. The trend reached its chic apex in 2012 as Arian Foster owners and failure enthusiasts inexplicably burned 8th round picks on the most expensive handcuff in fantasy football history, Ben Tate.

Handcuff exuberance has since throttled down in recent years as formerly trendy handcuffs from Christine Michael to James Starks to Lance Dunbar have disappointed on a more regular annual schedule than rain on the Serengeti. Furthermore, NFL teams are phasing out the all-purpose, every-down NFL workhorse in favor of specialized RB tandems such as pass-catching wizard Shane Vereen and road grater LeGarrette Blount. With fewer clear-cut No. 1 running backs, NFL depth charts have become less straightforward, decreasing the overall upside of the “next man up” (assuming you can figure it out).

The moment hipster fantasy owners stop investing top-15 round draft capital on handcuffs is the moment that the uncool, yet more successful, fantasy contrarians begin buying. Trendy or not, it still makes logical sense to protect the value of your top draft picks by investing very late round picks on an inexpensive handcuffs who are positioned to assume the majority of vacated opportunities if an incumbent player is lost due to suspension or injury. While no sane fantasy gamer would advocate burning a mid-round picks on a pure handcuff, a handful of stealthy, under-the-radar handcuffs with tremendous upside will likely be available in the final rounds of redraft fantasy leagues in 2015. Here are five players to closely monitor during preseason and either acquire on draft day or immediately scoop when injuries to key fantasy studs inevitably strike.

Note: this piece went to print before Arian Foster’s August groin injury and subsequent hernia surgery, yet Jonathan Grimes continued to be a final round fantasy draft selection even after Foster went down.

While Arian Foster’s fantasy points per game were top-5 among running backs in 2014, he also missed 11 of 32 games the past two years, not counting the games he played at less than 100-percent after being a true game time decision. Going on 29-year old, Foster is well past the age apex for running backs and no NFL RB is less likely to play a full 16-game slate. This production vs. dependability conundrum makes Arian Foster the most handcuff-worthy player in fantasy football. The silver lining of the situation for Arian Foster enthusiasts is that most fantasy gamers have the dilemma all wrong – they think Alfred Blue is the best handcuff, and they are be wrong.

After out-playing Blue in 2014 and posting 22.6 PPR fantasy points in his one start in 2013, Grimes is poised to be the ultimate dark horse must-have handcuff for 2015.

For example, if you draft Odell Beckham Jr., you’ll likely be investing top-10 draft capital, therefore, it makes sense roster Beckham’s direct back-up with a late round selection in case an unfortunate event befalls OBJ during the season. That player would be Corey Washington, who at 6-4, 214-pounds, features great size-adjusted speed and agility exhibited by a 104.3 (77th percentile) Height-adjusted Speed Score via PlayerProfiler.com. Washington’s dominant college resume at Newberry College demonstrates that he is more than just a size/speed specimen. From Victor Cruz to Larry Donnell, the New York Giants have been particularly adept at grooming small school skill position players to be featured offensive weapons at the NFL level.

If Odell Beckham Jr. goes down, Washington is better-positioned than Rueben Randle to become Eli Manning’s primary read in most passing situations, and particularly in the read zone. Randle was exposed as inefficient and unable to handle the rigors of primary WR duty in an every-down role in 2014 after posting 7.4 yards per target (No. 66 among qualified WRs in 2014) and 1.44 fantasy points per target (No. 75 among qualified WRs in 2014). Randle’s 27 yards and 0 touchdowns on 10 targets against Houston in week 3 of 2014 demonstrated that he was out of his depth playing the No. 1 WR role in New York’s offense. Fortunately for Giants’ fans, Odell Beckham returned to the lineup soon after.

Conversely, Corey Washington, like Victor Cruz before him, is an ascending small school WR who likely needed a full year of development before converting his raw ability into on-field productivity and efficiency.

As top-20 picks in most league formats, Arian Foster, Odell Beckham Jr., Jeremy Hill, and Jordy Nelson are some of the more obvious handcuff candidates, however, one particularly player, who is rarely drafted in the first two rounds, also happens to be a must-handcuff: Frank Gore.

Indianapolis ran the most offensive plays and garnered the most red zone opportunities in the NFL in 2014. The Colts offense is a fantasy point-scoring engine. One of its key pistons heading into 2015 is Frank Gore, a 32 year-old with 2,442 career carries who is coming off a season in which the advanced metrics indicated that his efficiency significantly declined highlighted by a -19.7 Production Premium on PlayerProfiler.com.

Given his advanced age and declining effectiveness, no player is more handcuff-worthy than Frank Gore in 2015. While the Colts depth chart listed Dan “Boom” Herron as the Gore’s primary backup throughout OTAs, Josh Robinson is best bet to win this coveted role at the conclusion of preseason.

Josh Robinson is a high-BMI bowling ball with an all-purpose skill set, reminiscent of C.J. Anderson. Robinson demonstrated that he can do it all during a career at Mississippi State in which he posted Jeremy Hill-esque efficiency (6.3-yards per carry) in the SEC. Beyond ground game effectiveness, Josh Robinson exhibited quality receiving skills by catching 28 passes in 2014, a critical skill for any running back lined up behind Andrew Luck, the league’s most prolific passer. Robinson’s prospect profile heading into the NFL Draft, however, was muted after he posted uninspiring workout metrics the Combine. After falling into the 6th round of the draft, Robinson has often gone undetected in fantasy football drafts. Given his late-round ADP, even non-Gore owners should be rostering Josh Robinson given Gore’s age, mileage, and year-over-year efficiency degradation.

Jordy Nelson was one of the best wide receivers in fantasy football in 2014, but he also turns 30 this year and has been hampered by lower leg injuries in multiple previous seasons. Should an unfortunate muscle or ligament tear befall Nelson, the 6-3, 219-pound Jeff Janis would be called upon to run the outside receiver route tree. While Randall Cobb, Davante Adams, and Ty Montgomery are build as much like running backs as receivers, Jeff Janis’ profile aligns with today’s elite WR prototype, and his college productivity was similar to a young Jordy Nelson. Yet, Janis is actually faster and more agile based on his NFL Scouting Combine workout metrics:
• 40-yard dash time: 4.42, 87th percentile
• Burst Score (equally-weighted vertical jump + broad jump): 125.3, 77th percentile via PlayerProfiler.com
• Agility Score (20-yard shuttle + 3-cone drill): 10.62, 97th percentile

Like Marques Colston… and Miles Austin… and Victor Cruz… and Pierre Garcon… and Antonio Brown, Jeff Janis is evidence that NFL front offices have yet to fully understand how to evaluate small school receivers. While Cobb and Davante Adams and Ty Mongomery are inside receivers, Jeff Janis and Jordy Nelson have the size and explosiveness to win on the outside. This differentiation means that if anything were to befall Jordy Nelson, Jeff Janis would likely be called upon to run Nelson’s route tree, not Davante Adams or Ty Montgomery.

Wait, isn’t Giovanni Bernard Jeremy Hill’s direct back-up? Not so fast. In the second half of the 2014 season, Bernard averaged less than ten carries per game as the Bengals finally conceded that Gio Bernard is best deployed in passing situations.

At 242-pounds, Terrell Watson has become a sasquatch-like prospect – a real-life speed-size legend who scored 29 touchdowns in anonymity at Asuza Pacific in 2014. Anyone investing a first round pick in Jeremy Hill in 2015 fantasy leagues would be wise to use their final round pick on Watson, who is one of only a handful of backs in the 2015 rookie class capable of seamlessly replacing Jeremy Hill’s role in the Bengals’ offense.

As fantasy gamers gravitate toward draftmaster formats that disallow in-season moves, handcuffing studs has come back en vogue. Rather than burning valuable draft capital on a high-end handcuff who will spend most of his time on the bench (think Ben Tate in 2012 or Christine Michael in 2014), target one of the handful of under-the-radar running backs and wide receivers available in the final rounds of fantasy drafts. These true sleepers are in-line to seamlessly replace their stud teammate’s role on offense, and yet most fantasy gamers have never heard of them.