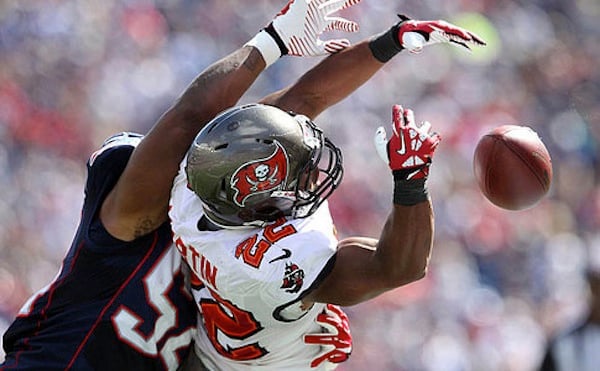 If you have been living on the set of Interstellar for 5 minutes or 50 years (depending on the planet’s proximity to a black hole) and away from fantasy football for a while, you may not recognize what the game has become when you return to Earth, and this is not just another hype piece about exponential growth of Daily Fantasy Sports (DFS).

Since you’ve been gone, revolutionary draft strategies such as Shawn Seigele’s Zero RB Theory have demonstrated that high stakes redraft fantasy leagues can actually be won by shirking the running back position for first five to eight rounds, before finally surrendering in the form of Chris Ivory or David Johnson. It’s true. Every day a new fantasy football roster is birthed with LeGarrette Blount sitting in the team’s RB1 roster slot.

Evolving beyond the Value-based Drafting framework that dominated fantasy football’s communal mindset for over a decade, Seigele and his colleagues at RotoViz.com articulated a more sophisticated approach to building the optimal fantasy football roster. They did not simply push out an eBook with a bulleted list of key draft tactics and recount how specific rosters succeeded using Zero RB. Rather, Siegele and Co. created a new prism through which fantasy gamers think about roster construction and a new framework on which all fantasy football enthusiasts can build their redraft strategy.

Zero RB now boasts an army of advocates who proudly and zealously adhere to the strategy regardless of who mainstream fantasy experts believe is the best player available at any given slot, but the framework has also informed the fantasy football community more broadly. Since you last played fantasy football, the game’s best tight end (Jimmy Graham in 2014 and Rob Gronkowski in 2015) is now a staple first-round pick. Starting WR-WR has also become a mainstream tactic — MyFantasyLeague.com ADP since June 15, 2015 features five wide receivers in the top-12 in PPR leagues: Antonio Brown, Odell Beckham, Julio Jones, Demaryius Thomas, and Dez Bryant. Those holding onto the anachronistic idea that a successful fantasy gamer must lock up stud running backs early now live on a different planet.

The early-round running back is going out-of-fashion, because as Shawn Siegele explains in his groundbreaking piece: Zero RB, Antifragility, and the Myth of Value-based Drafting, the inherent fragility and subsequent volatility of the running back position leads to less accurate RB fantasy output forecasting. Running backs bust more frequently than quarterbacks, wide receivers, and tight ends — this concept is crux of Zero RB Theory.

The RotoUnderworld Team reviewed bust rates across positions (QB/RB/WR/TE) in 2013 and 2014 to be incorporated into the VOS metric. Bust rates were defined and calculated using the following approach.

To create a cost-discounted bust indicator for quarterbacks and tight ends, we take each QB/TE who was drafted it the first 12 rounds of 2014, multiply his fantasy points per game by a “draft capital premium,” and finally subtract that number from the cohort average. The process is then repeated using 2013 data.

By separating bust rates into tiers, for example, we ensure that a second round running back or wide receiver who produces like a low-end RB/WR2 will be considered a bust, even if that player is still measurably better than the best available waiver wire player at the position.

The results of RotoUnderworld’s “Cost-adjusted Bust Rates by Position (2013-2014)” study were both predicable and surprising.

Here are five actionable observations from this bust rate analysis:

1. Running backs drafted in the first twelve rounds are approximately 15-percent more likely to bust than wide receivers. Given that RB1 and WR1 fantasy output is close to on-par in PPR leagues, all else being equal, drafting a wide receiver over a comparable running back at any given draft slot is preferable.

2. An argument for drafting running backs in rounds 1-4: stud RBs own both the highest value over replacement and least risk (even after adjusting for draft capital).

3. Partially driven by a frightening fragility rate (tight ends miss 16.8-percent of their games due to injury — the highest rate among skill positions), tight end output is almost as volatile and difficult to forecast year-to-year as running back output. Investing first round draft capital in Rob Gronkowski is risky. Those selecting a top-3 tight end early would be wise to double down and take two (Gronk-Kelce will be a strong hand in 2015).

4. The annual stability and predictability of quarterback drafted in rounds 1 through 12 enhances the value of second tier QBs such as Cam Newton, Matt Ryan, Ben Roethlisberger, and Tony Romo over and above the stream.

5. Though a two-year sample is relatively small, the clustering of ultra-high RB bust rates in round 5 through 8 juxtaposed next to a cluster of relatively low WR bust rates in that same draft slot range suggests that rounds 5-8 are both an RB dead zone and a WR sweet spot.