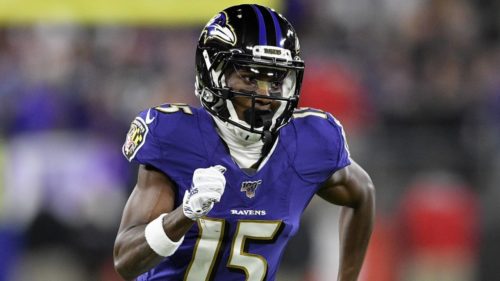 What an offseason, but we made it. Football is back, baby. That means no more talk—it’s time to set real lineups in real contests with real money on the table. This weekly series will cover several cost-efficient wide receivers providing massive upside for GPP tournament lineups. These are typically wideouts with high volatility in a pass-heavy environment in a game projected to produce a lot of points. We’ll use advanced stats and metrics from the PlayerProfiler Data Analysis Tool to identify each player.

Raiders rookie Henry Ruggs can make an immediate impact in his first NFL game. His game is comparable to Ravens wideout Marquise Brown, who we saw burst onto the scene in his debut last season. It’s easy to picture 125 yards and a pair of scores. The Panthers ranked No. 22 in fantasy points allowed to wide receivers in 2019 while surrendering the fourth-most targets to the position. They didn’t make any improvements to the secondary, and a case can be made that they actually got worse.

This contest can easily turn into a shootout, which will only play into Ruggs’ game. Outside of Darren Waller, the Raiders’ Target Share totem pole is wide open, making it highly feasible that Ruggs nears double-digit targets in this one.

DeSean Jackson is the chalk play of this group. He’s an obvious candidate for a massive Week 1, which would be nothing new for him. Jackson has six career Week 1 performances of over 100 yards, including eight receptions for 154 yards and two touchdowns against Washington last year. And who does he get in Week 1 this year? Oh yeah, Washington again. With Alshon Jeffery and rookie Jalen Reagor out with injuries, Jackson is in line for a significant share of the Eagles passing attack. Jackson will see plenty of former teammate Ronald Darby, who allowed the second-most receptions of 20 yards or more and the second-most yards at the cornerback position in 2019. Jackson should take advantage. He’s a classic tournament play and is only priced at $4,900 as the WR37.

Marquise Brown is an obvious season-long breakout, but he also makes for a great tournament play in Week 1. Brown flashed as a rookie, posting multiple top-24 fantasy performances, including nearly 150 yards and two scores in Week 1. Lower-body injuries hampered him for much of the way, depriving us of what could have been a great rookie year. He finished with 46 (No. 54) receptions for 584 (No. 56) yards and seven (No. 13) touchdowns. Brown was second on the team behind Mark Andrews with an 18.9-percent (No. 44) Target Share. He averaged 2.25 (No. 25) Yards Per Route and recorded a +14.0 (No. 21) Production Premium. The Lamar Jackson-to-Brown connection produced a 123.2 QB Rating, the sixth-best among all quarterback-to-wide receiver combinations.

We can naturally anticipate a more pass-friendly offense in 2020, which will only bode well for the man they call Hollywood. With no serious competition for targets outside of Andrews, Brown is in line for a significant share of the passing offense. Priced at $5,200 (WR32) on DraftKings, Hollywood is a great play vs a vulnerable Browns secondary.

The point total over/under on this game is on the low end which we usually try to avoid, but game script and target share will set up Terry McLaurin for a big afternoon. Outside of McLaurin, the rest of Washington’s target share is up in the air. It’s even worse (or better) than last year when none of his teammates came close to his 93 (No. 34) targets or 23.0-percent (No. 22) Target Share. His 36.7-percent Dominator Rating ranked No. 2 among all wideouts, as did his 47-percent share of his team’s Air Yards. His blazing 4.35 (98th-percentile) speed allowed him to be a deep threat as well as a target hog, another reason why we can confidently play him in DFS. McLaurin drew 21 (No. 24) Deep Targets, averaging 15.8 (No.14) yards per reception and 9.9 (No.12) yards per target with 13.9 (No. 21) yards of Average Target Distance.

McLaurin was extremely efficient for a rookie, especially considering Washington’s comically bad quarterback carousel. His 2.38 (No. 19) Yards per Pass Route, one of the more predictive metrics for future fantasy production, ranks third among rookie wide receivers over the last three seasons.

For the second-straight season, McLaurin will see the Eagles on opening day. He torched them for 255 yards and two touchdowns in two games last year. Those were his two highest yardage totals of the season and included 125 receiving yards and 23.5 fantasy points in Week 1. He’s slightly underpriced as the WR25 on the slate on DraftKings but has clear top-10 upside for the week with a safe floor and high ceiling.

Russell Gage averaged more than seven targets per game after the team traded Mohamed Sanu to the Patriots in Week 8. He is locked in as the team’s No.3 WR. He will play mostly in the slot, where he took 64.4-percent of his snaps in 2019, giving him prime opportunity to dominate the middle area of the field with Sanu and Austin Hooper gone. This game has one of the highest over/unders on the slate and, at just $4,300 (WR58), Gage gives us a way to get in on this likely shootout without breaking the budget.

The team has talked up Tre’Quan Smith all summer and he’s priced at WR71 in what could wind up the week’s highest scoring shootout. Let’s not forget we’ve seen boom weeks from him before, with two top-five performances in 2018.

Marquez Valdes-Scantling received praise from quarterback Aaron Rodgers for having a great camp, and we know it’s important for Rodgers to like a receiver before we can count on any fantasy production. While Valdes-Scantling struggled with confidence in 2019, he’s a threat to produce a big-play at anytime, and that’s what we’re looking for with these deep DFS options. MVS was top-five in Average Target Distance in 2019 and No. 8 in yards per reception. At only $4,100 he’s worth a dart throw against a vulnerable Vikings secondary.