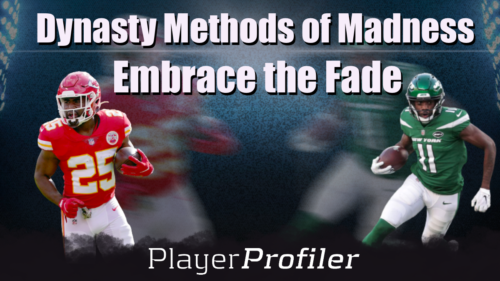 In fantasy football, there are a plethora of terms that managers become accustomed to. Bust, Sleeper, Handcuff; these words are heard in abundance when frolicking through this world. One such term, Fade, is the underlying theme of this article. Most often used in daily fantasy, Fade is used throughout the fantasy community to identify certain players to avoid for a period of time, for one reason or another. Whether it’s high ownership, a regressing offense or additional competition, there are a myriad of motivations to fading a player. However, not all who wander the land of the faded are lost.

Every season features players who outproduce their ADP, revealing the fade to be fraudulent. Stefon Diggs and David Montgomery are prime examples from 2020 of players shunned by many. Diggs, heading to a new team with a shortened offseason, fell to the fifth round of fantasy drafts. For that trouble, he finished No. 3 among qualified receivers with 20.5 Fantasy Points per Game. Montgomery, after an underwhelming rookie season, was drafted as the No. 29 running back on average last year. He finished the season as the No. 4 running back in PPR scoring, with a 17.5 (No. 6) Fantasy Points per Game average.

As with everything in fantasy football, context matters. Sometimes, it’s better to simply embrace the fade.

Daniel Jones and the New York Giants failed to take the “next step” in 2020. The second-year quarterback ranked near the bottom of the league in many of PlayerProfiler’s advanced stats, lowlighted by a –18.9 (No. 31) Production Premium and 79.0 (No. 29) True Passer Rating. However, there are several factors that played a role in his performance. To begin, star running back Saquon Barkley tore his ACL in Week 2, leaving a Vince Wilfork-sized hole in the running game. This helped lead to him being pressured on 30.3-percent of his drop backs, the second-highest mark in the league behind Nick Mullens (31.3-percent in his eight starts for the 49ers).

In addition to Barkley’s absence, Jones spent time without his top wideout Sterling Shepard, who missed four games due to a toe sprain. Overall, the receiving crew couldn’t provide enough help for the young QB. As a unit, they posted a 1.48 (No. 28) Receiver Target Separation mark and they averaged 2.50 (No. 81) Yards After the Catch per Target. The group managed to chip in 55 (No. 14) Dropped Passes as well. While it’s true Jones didn’t do a ton to garner confidence from the organization in their decision, injuries and the supporting cast cannot be overlooked. Many fantasy managers may see his performance in 2020 as a reason to fade him, but he deserves more attention.

Check out the biggest risers in the https://t.co/JtvRe0BFSp Dynasty Rankings through 1 week of Free Agency 💰

This upcoming season, the Giants will get Barkley back from injury. The play of the stud back will help keep the pressure off of Jones, which will help tremendously. Not to mention, the signing of Kenny Golladay gives him a legit No. 1 wide receiver to lean on. The fantasy world saw the improvement from Buffalo quarterback Josh Allen when given a bonafide stud at wideout. Kenny G should do the same for Mr. Jones. And not to forget about the rushing upside the youngster provides. In 2020, Jones logged 423 (No. 6) Rushing Yards on 65 (No. 7) Carries. With his mobility and the improved supporting cast, there’s no reason to abide by this fade.

The big debate last offseason heading into rookie drafts was who the top back in the class would be – the Chiefs’ Clyde Edwards-Helaire or the Colts’ Jonathan Taylor. While it was CEH who stayed as the top rookie pick, it was Taylor who had the better season. The Colts rookie finished with 1,169 (No. 3) Rushing Yards and 12 (No. 4) Total Touchdowns. Meanwhile, Edwards-Helaire totaled 803 (No. 17) Rushing Yards and five (No. 6) Total Touchdowns. Fast forward to this offseason and Taylor is not only being drafted far ahead of CEH, but ahead of many known names. He’s currently the fifth back taken in drafts on average.

For CEH, on the other hand, let’s just say it’s been quite the fall from grace. He has a solid 66.1-percent (No. 12) Opportunity Share in 2020, but a look at his 4.3 (No. 28) True Yards Per Carry is concerning, particularly on an offense where he saw a mere 6.5 (No. 62) Average Defenders in Box. Between the disappointing rookie campaign and the Chiefs tearing down their offensive line, the belief in the back has faded. He currently sits as the No. 20 RB taken on average. In fact, fellow 2020 rookies J.K. Dobbins, D’Andre Swift and Cam Akers are all being taken ahead of Edwards-Helaire. Oh, and Josh Jacobs (who now shares a backfield with Kenyan Drake), as well. Eeesh. However, there’s plenty of reasons to buy into CEH this year.

Edwards-Helaire is being passed up in drafts in a big way; the price here is too tantalizing to ignore. The aforementioned David Montgomery, another RB being drafted ahead of CEH, had a similarly disappointing rookie year, averaging 3.5 (No. 56) True Yards Per Carry. He improved to that to 4.0 (No. 47) True Yards per Carry last season, while also improving in other areas such as Juke Rate and Yards Created on the way to his top-5 fantasy finish. A similar result isn’t out of the question for Edwards-Helaire, especially on an offense as potent as Kansas City’s. The faith is lacking, take advantage.

With Adam Gase out of town, the New York Jets will hope to see improvement all around. While the quarterback position has taken the spotlight, there are new additions to the offense that also reveal questions. Tevin Coleman joins a running back room lacking in talent, though he is past the Age Apex for running backs. More notably, Corey Davis joins the receiver room, giving Joe Flacco or whoever else (Zach Wilson, perhaps?) a solid and experienced weapon. Many seem to have taken the Davis signing a bit too far, though.

Despite a solid 2020 campaign, playing second-fiddle to A.J. Brown, the former first-rounder has failed to live up to expectations. Still, Davis is viewed by many to be the “top dog” at wideout for the Jets now, leading to a fade of 2020 rookie receiver Denzel Mims. Playing in just nine games as a rook, the Baylor product stepped into the offense halfway through the season and immediately garnered an insane 97.8-percent Snap Share in his first official NFL game. Aside from a shortened Week 17 due to a concussion, Mims dipped below 91.0-percent just once, leaving his season average at an 88.6-percent (No. 20) Snap Share.

The percentage of snaps Mims was on the field was impressive, but the new coaching staff coming in may have a different view on the second-year receiver. However, the talent that led Gase to to having him on the field so much is sure to shine through to the next staff. In the half-season Mims played, he averaged 15.5 (No. 17) Yards Per Reception with an 88.5-percent (No. 29) True Catch Rate. With improved quarterback play and a legit threat opposite from him, Mims has the chance to shine in 2021.

”Tyler Higbee is free!” Throughout fantasy football land, echoes of this cry will be heard all offseason. While it is true that Higbee is an intriguing option heading into 2020, the man who left and “freed” him, Gerald Everett, is also free and now up in Seattle with Russell Wilson. The free agent addition walks into a situation with a quarterback known for throwing to tight ends and a lack of competition at the position. It wasn’t long ago that Wilson pushed Jacob Hollister and Will Dissly into fantasy relevancy. Hollister is in Buffalo and 2020 free agent signee Greg Olsen retired. That leaves Dissly as the likely starter and Everett’s main competition. If, of course, coach Pete Carroll lets Russ cook.

While Dissly has had success, he doesn’t have near the athleticism or production that Everett does in his profile. Not to mention he was highly efficient with his opportunity in 2020. The ex-Ram finished the season with a 93.2-percent (No. 5) True Catch Rate, a 2.00 (No. 6) Target Separation mark and an 8.2-percent (No. 6) Drop Rate. His former teammate Higbee ranked much lower in these categories (No. 28, No. 13 and No. 18, respectively). This is the most talented tight end Wilson has ever had the pleasure of throwing to; it could be a boon for him, the Seahawks and fantasy managers alike.