While Jaylen Samuels was an intriguing pre-Week 1 bench stash, holding him for the last 13 weeks would’ve been ill-advised (unless the league was super deep).  In Yahoo leagues, where he has TE eligibility, he should have been an auto-stash as soon as James Conner suffered a concussion in Week 10. Even though that injury didn’t cause him to miss any time, it should’ve driven the point home that Samuels was one more injury away from a potentially league-winning role. Picking him up once we found out Le’Veon Bell wouldn’t be playing this season would’ve also been acceptable. If you did, you have a player you could justify starting this week in a pinch against Oakland.

As we enter the fantasy playoffs in most leagues, we need to focus on stashing players who have the quickest path to starting lineups in the event of an injury apocalypto. Those who were starting A.J. Green and Marvin Jones, but shuffling the end of their rosters with players like D.J. Moore, Chris Godwin, Courtland Sutton or Josh Reynolds, to name a few, shouldn’t have much to worry about (except for playing the right player in the right week). Being able to stash players like Jaylen Samuels and Spencer Ware for free, so as to not burn FAAB or a high-priority waiver claim on them, could yield bountiful rewards. We’re always learning new lessons about when to stash players in fantasy football based on their advanced stats, metrics and analytics profiles. One of the lessons that should be set in stone is that once the bye week portion of the season begins to wind down, backups to the elite workhorse RBs on the high scoring offenses need to be rostered where possible.

For a little while, Gus Edwards was looking like a potential league-winner. Despite having a decidedly average prospect profile, he seized control of a backfield with the most favorable rest-of-season schedule. One whose switch to a more mobile QB would only benefit him. But with one target on the season, zero since becoming the lead back, he’s become a touchdown-or-bust option. Not surprising when you consider his 6.5-percent (37th-percentile) College Target Share. Add in an ankle injury that he appeared to tweak at the end of last week’s game, and the case for stashing Kenneth Dixon becomes even clearer.

Kenneth Dixon is a longtime favorite of the Underworld community and has a chance to surface as the real potential league-winner in this backfield. He had recorded 13 carries before his Week 1 knee injury, which should concern Gus Edwards owners if he begins to underperform. Dixon also carried the ball eight times last week in his first game back from that injury, while recording a target and catch. In the event of Edwards losing time to injury or demotion, Dixon’s versatility would make him extremely valuable. It would likely be ill-advised to start him if your league’s playoffs begin this week. But those in enough of a pinch to need a desperation start can take solace in a second-best-possible match-up against the Chiefs.

From Deon Cain to Chester Rogers to Ryan Grant to Dontrelle Inman, the search for a number two receiver for Andrew Luck has been an ongoing process. Inman had been working his way into that role, but a shoulder injury that will keep him sidelined this week may have ended that dream. Cain tore his ACL over the summer and Rogers has needed T.Y. Hilton missing games to have any fantasy viability. And with Hilton nursing a shoulder injury of his own that has rendered him questionable for this week, the Colts need bodies. Thankfully, they’re receiving one who was called up from the practice squad this week.

Of all the receivers on the Colts roster, fifth-round rookie Daurice Fountain best fits the mold of a viable number two option behind T.Y. Hilton. Fountain is the clubhouse leader with a 139.3 (99th-percentile) Burst Score, a 10.32 (95th-percentile) Catch Radius and a 111.5 (70th-percentile) SPARQ-x score. At 206-pounds, Fountain outweighs Ryan Grant by 15-pounds and outweighs Chester Rogers by 20. This, combined with his elite burst and his 95th-percentile arm length, makes him a more natural fit as a replacement for Donte Moncrief. A player who made more of his collegiate living scoring touchdowns than accumulating receiving yards, it’s easy to imagine Fountain becoming a viable fantasy football option down the playoff stretch.

For a while, John Elway was developing a reputation as a general manager who couldn’t make good draft picks. That there are no Paxton Lynch truthers remaining (that we know of) tells you all you need to know about that portion of his GM career. Lately he’s begun to turn it around, especially on the offensive side of the ball. The 2018 offseason alone has seen the additions of Royce Freeman, Phillip Lindsay, Courtland Sutton and DaeSean Hamilton. All except Hamilton have made meaningful contributions to the offense in their rookie years, with Hamilton about to receive his best chance.

DaeSean Hamilton admittedly hasn’t contributed much on the field since we first recommended stashing him before Week 11. To be fair, he still hasn’t seen a Snap Share above 52.9-percent. With Emmanuel Sanders lost for the season to a torn Achilles, that’s about to change. The team is still averaging 36.8 pass plays per game. And they still have a gunslinging QB in Case Keenum. Courtland Sutton may be a locked-in free square WR play for the rest of the season, but a good game for Hamilton this week could also put him in that conversation.

Ryan Switzer is a bench stash that’s not completely obvious on the surface. He’s had a relatively quiet first season in Pittsburgh, recording two double digit fantasy games and only breaking a 50-percent Snap Share once. But with JuJu Smith-Schuster continuing to see increased playing time on the outside, the slot role that he had been occupying opens up. In an offense as high-powered as Pittsburgh’s, that’s an important role to have. Especially if something were to happen to Schuster or Antonio Brown. 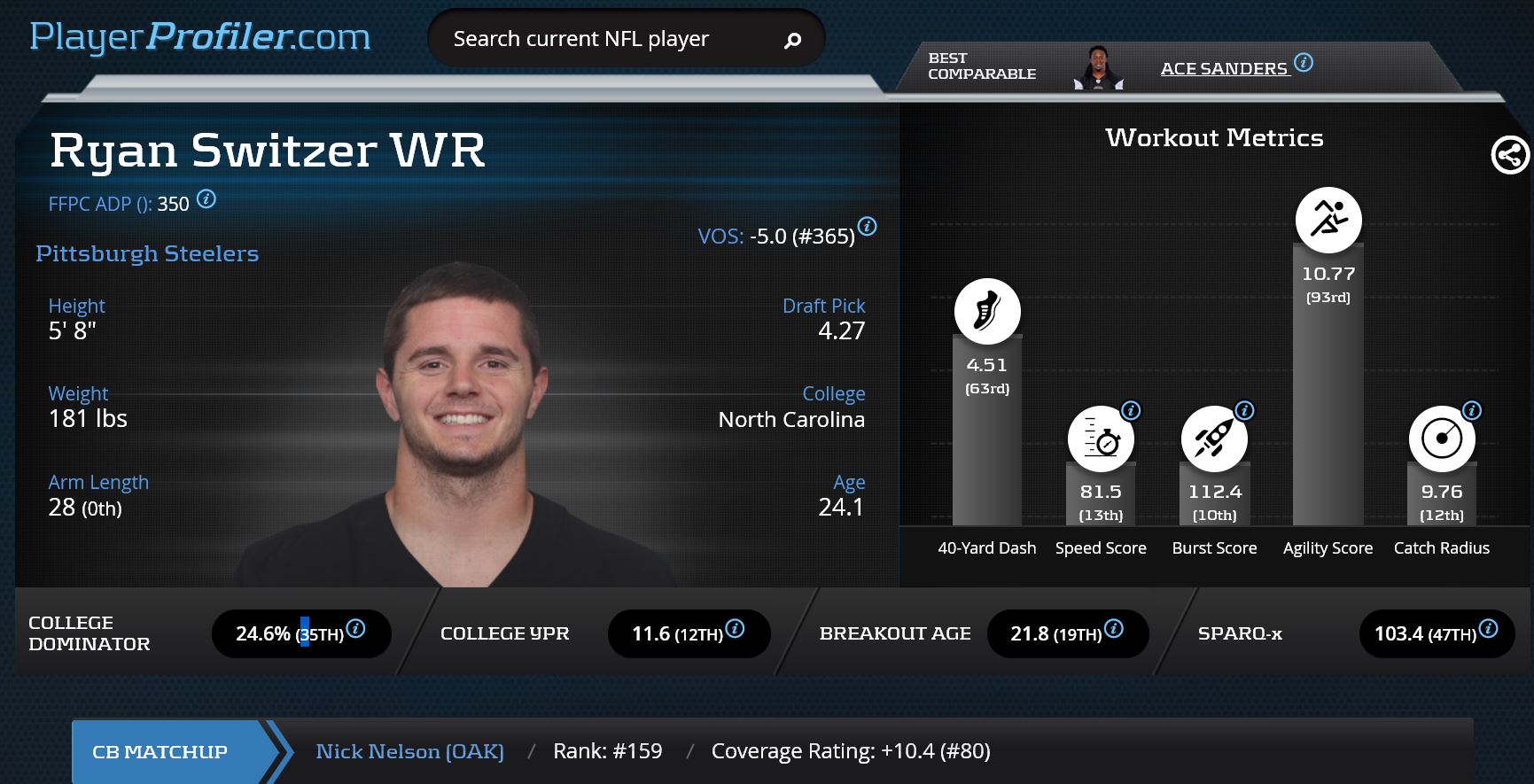 Even though Ryan Switzer hasn’t lit up fantasy box scores, he looks to be sliding into a role that best fits his skill-set. He has a 10.77 (93rd-percentile) Agility Score, which is a trait that we love to see in our slot receivers. His QB is in the midst of another efficient QB1 campaign. His team averages a league-high 44.9 pass plays per game. And his projected match-up this week, in a game with a Vegas point total exceeding 50, is against Player Profiler’s 159th-ranked cornerback. There are much worse players to stash and start in a pinch if you’ve lost Odell Beckham this week, for instance.

We’ve said it time and time again here at the Underworld, but it bears repeating even with Ian Thomas about to see another massive opportunity. It’s hard to rely on rookie tight ends to make a meaningful fantasy impact in year one given the inherent difficulty in learning how to play the position at the NFL level. After Greg Olsen went down in Week 1, Thomas still deserved stashing consideration in the event that he proved to be an exception to the general rule. And with Olsen now being lost for the year, Thomas deserves stash consideration once more. Especially since his early-season struggles will ensure that he’ll be available in a number of leagues.

We’re stashing Ian Thomas for the same reason that we stashed D.J. Moore earlier in the year and Curtis Samuel more recently. Because his QB is an elite fantasy option with the most favorable rest-of-season schedule at his position. Though he didn’t make a big impact earlier in the season when given an opportunity spike, and is not guaranteed to do so now, it’s hard to ignore an athletic profile with zero metrics under the 60th-percentile. He has the requisite size and weight-adjusted agility that we look for in our late round and bench stash TEs. If you’re rolling into the playoffs with only one player at the position and can afford to roster a backup, Thomas is your man.